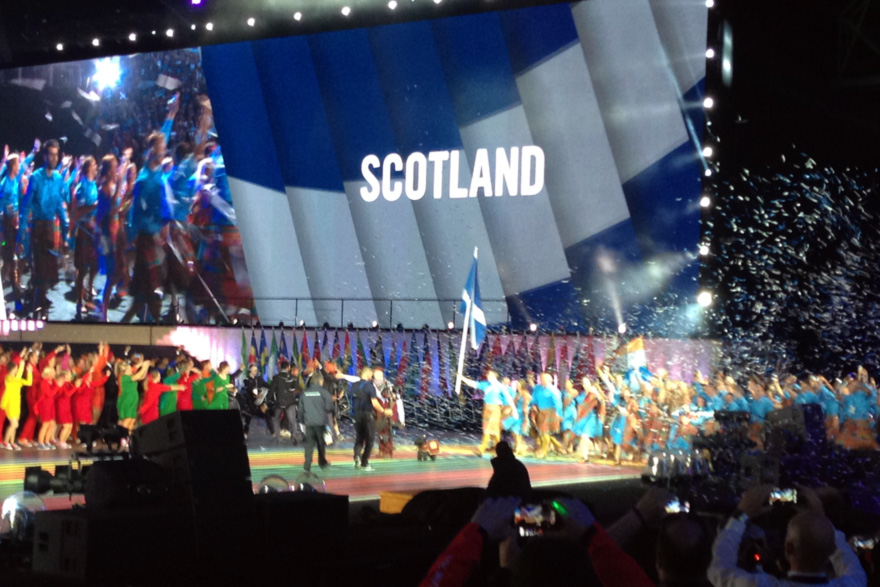 All photos by Deena Denaro

With the vote on Scottish independence just a few short days away, the United Kingdom may soon undergo a major geopolitical transformation that nevertheless feels like it's a world away from North American shores. Far be it for us to predict the results, but the forthcoming vote marks an apt occasion to share a photo essay from Glasgow, comprising photos from the XX Commonwealth Games and beyond.

The Games inherently have a political element—participating countries are former members of the British Empire—but more broadly speaking the international event was a singular opportunity for the host city to showcase the best that the country has to offer at this critical juncture in the nation's history. Whether or not the nation of 5.3 million chooses independence, it is certainly home to a rich design culture, from its long heritage in textiles to its contemporary makerspaces. Shot by Deena Denaro, these photos duly capture the spirit of the games and the pride of place in Glasgow itself.

At top: The Parade of Nations at the Opening Ceremony of the 2014 Commonwealth Games, featuring motion graphics by ISO Design. 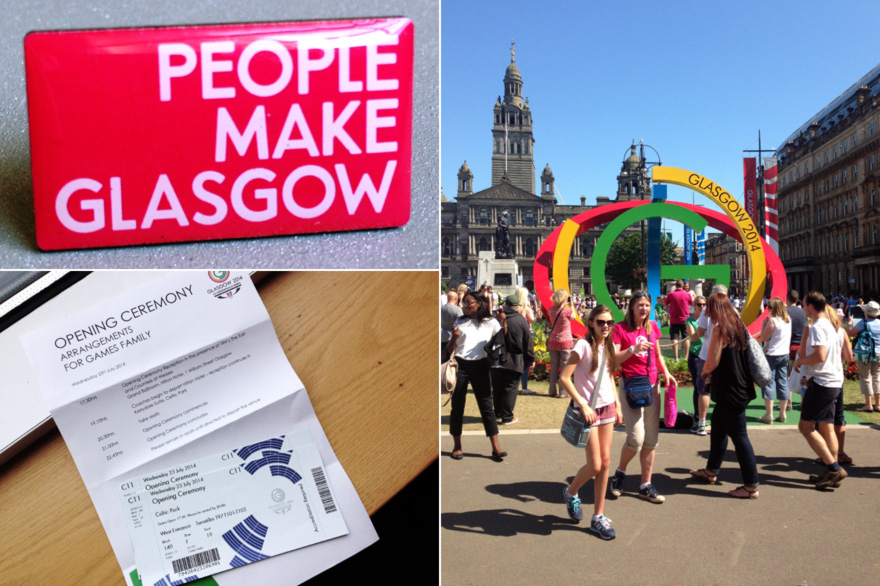 People Make Glasgow, the city's spot-on tourism campaign, launches our quest for pin badges, the unofficial currency of the Commonwealth Games. Each country, organization venue and/or sport mints it's own pin badge which are exchanged by athletes and delegates as a symbol of friendship.

The "Big G" was the cynosure of George's Square (recognizable as the backdrop for the opening of World War Z). The concept behind the logo is derived from time, data and measurement, with four distinctive parts. The red outer ring symbolises the fact that it is the 20th Commonwealth Games; the yellow ring (which is 17/20 of the size of the outer ring) symbolizes the 17 sports on the program; the blue ring (11/20 of the size of the circle; appears vertical in image) represents the 11 days of the event; and the 'G' in the center represents Glasgow, the color reflecting the Gaelic meaning of the city's name, "Dear Green Place." View the "Making Of" video here. 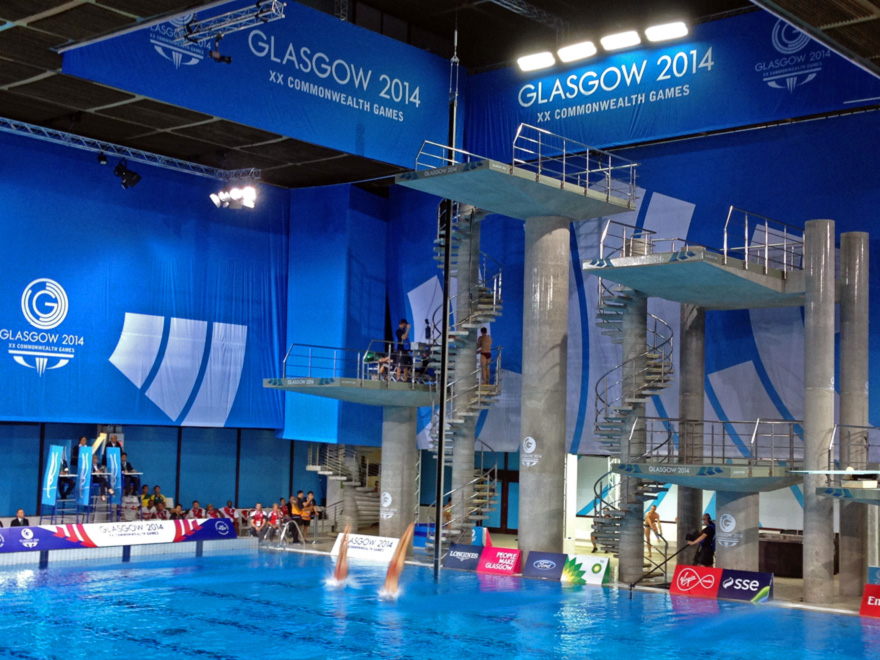 The venues featured two-dimensional incarnations of the logo, designed by Glasgow's own Tangent. 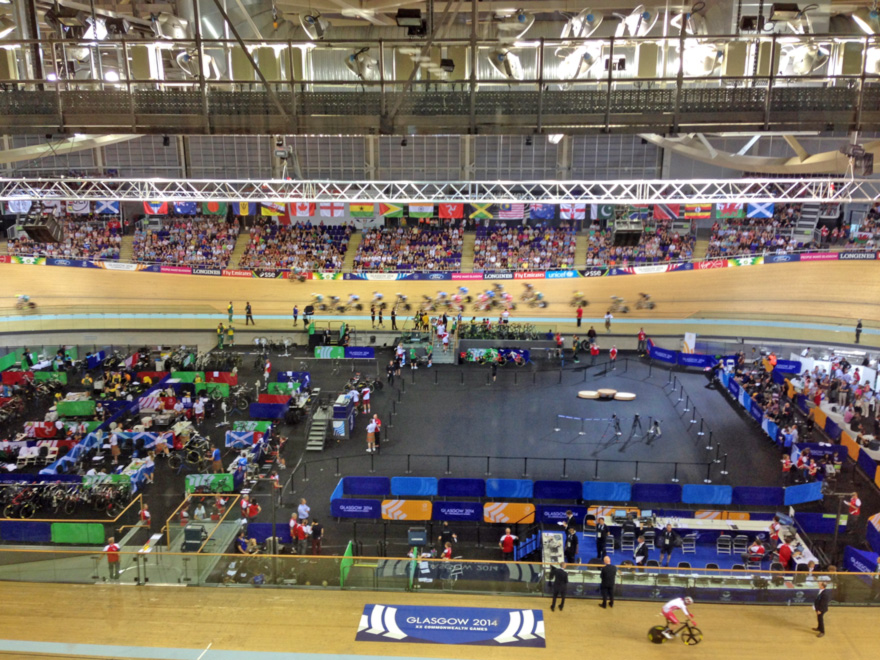 The view from the sky box at the Sir Chris Hoy Velodrome during the men's 40km points race. 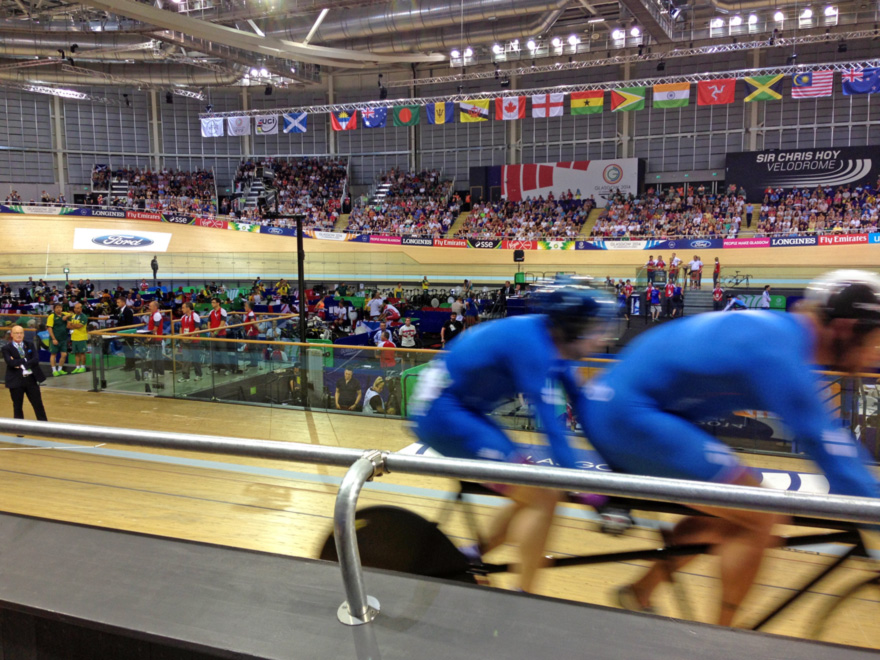 Scotland's tandem cyclists whizzing by as they take the gold. 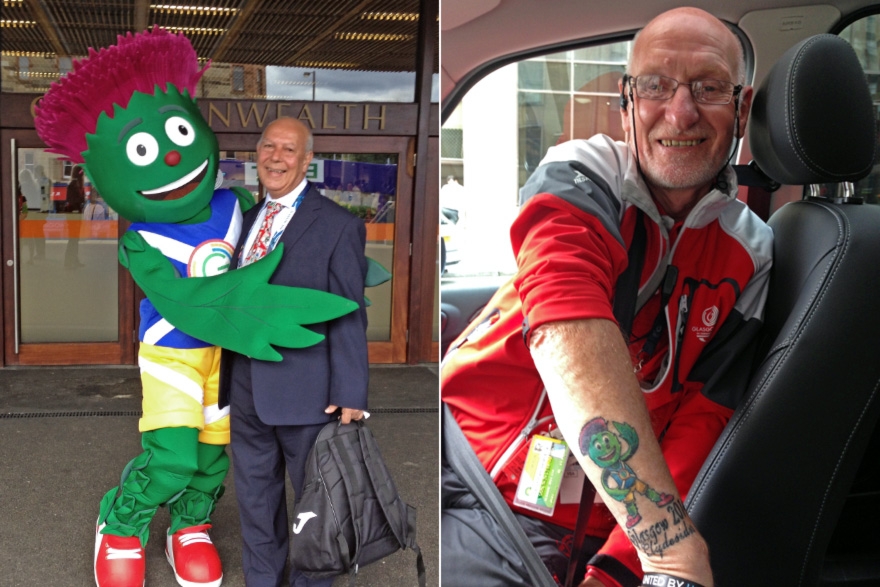 The mascot has proven to be incredibly popular: Clyde-Sider volunteer Craig Hamilton actually had Clyde tattooed on his forearm as a Souvenir. (Hamilton told me that he was 65 when he got his first tattoo—now he has nine!) 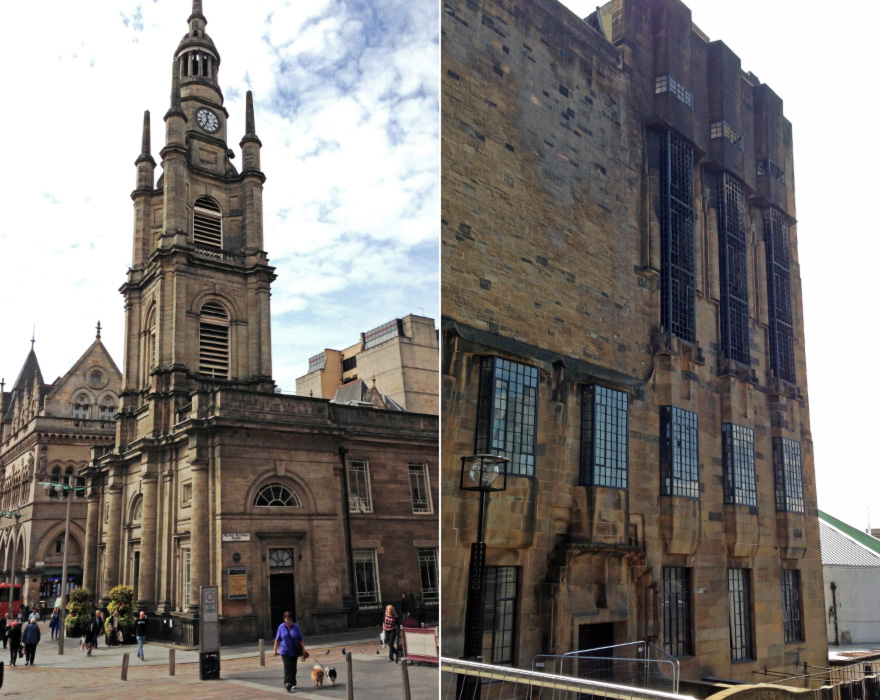 At left, Nelson Mandela Place, renamed from St. George's Place in 1986 to protest apartheid in South Africa. Scotland was the first nation to take a stance against apartheid by renaming the street on which the South African consulate was located in honour of apartheid's most famous prisoner. Mandela was later awarded the "Freedom of the City" by Glasgow councilors in 1993.

At right, the remains of Charles Rennie Mackintosh's Glasgow School of Art, which was ravaged by a fire last May. Brad Pitt and Peter Capaldi have reportedly offered their personal support to a £20 million fundraising campaign for the restoration of GSA's fire-damaged Mackintosh building. 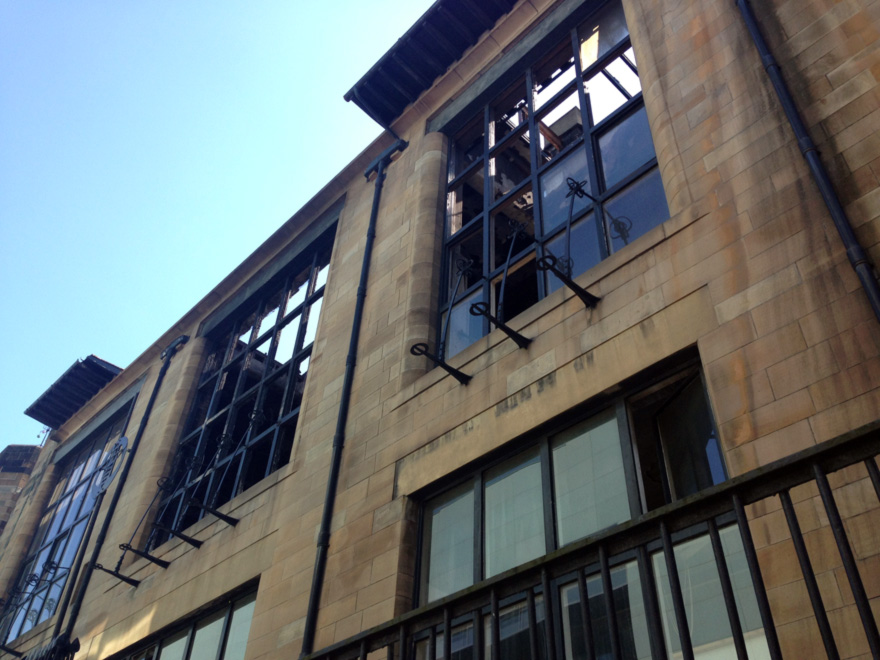 Restoration of the iconic building is due to begin soon. 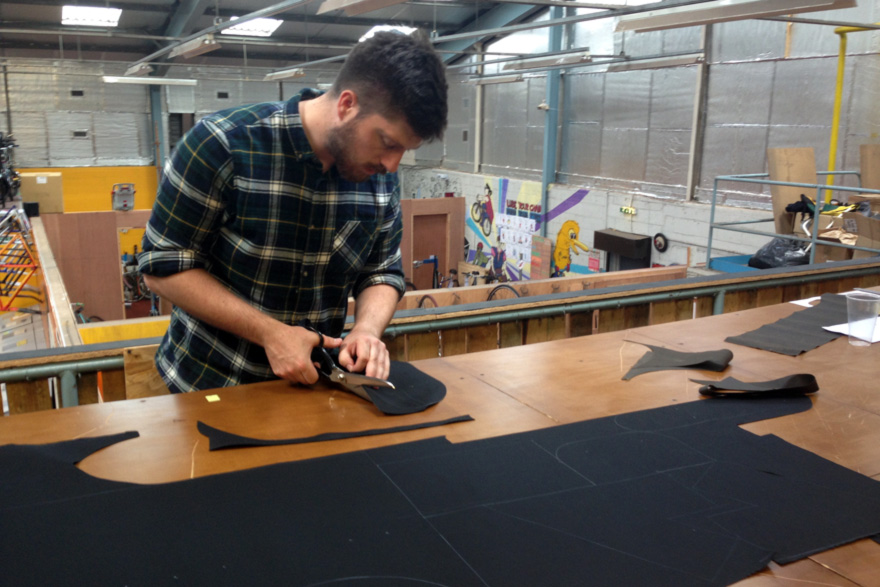 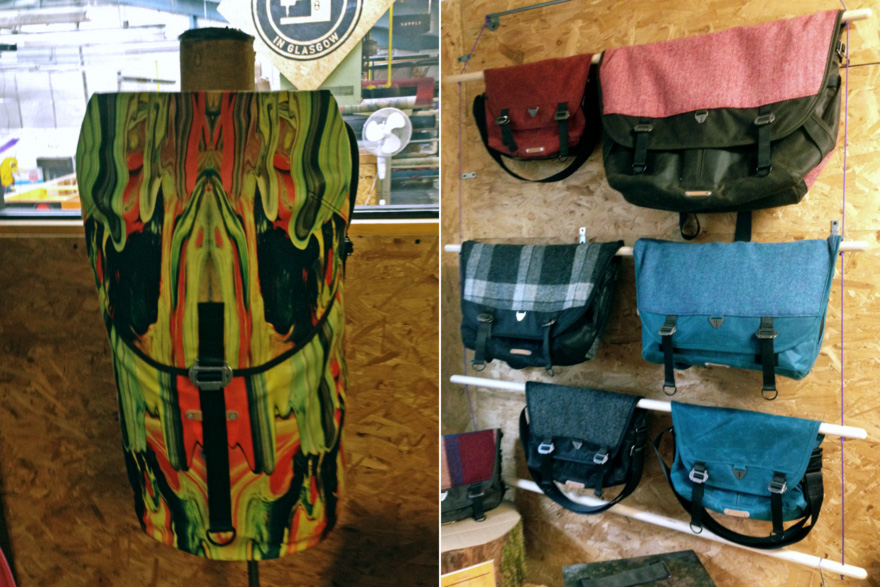 At left, a sample of a piece from Trakke's collaboration with Timorous Beasties, featuring digitally printed waxed cotton, a first for the textile manufacturer. 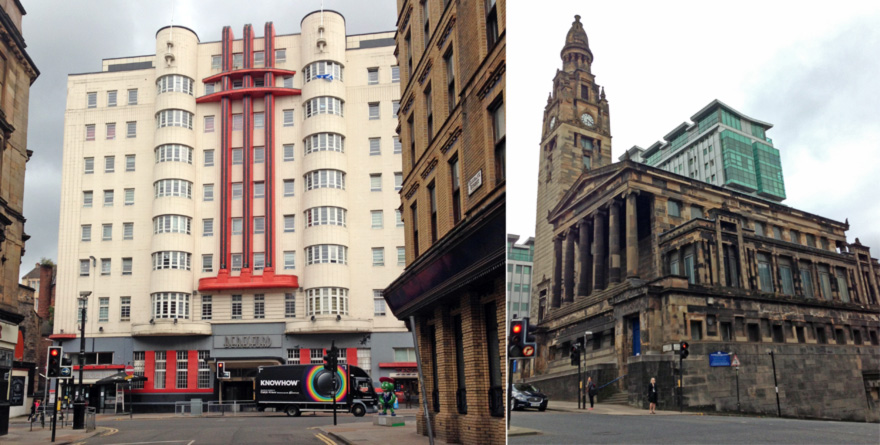 Designed by Willian Beresford Inglis, the Beresford Hotel (at left) opened in 1938 to provide accommodation for those attending the city's Empire Exhibition. Often described as Glasgow's first skyscraper, it is one of the city's most notable examples of Art Deco architecture. Currently it is student dormitories. (larger image)

At right, a Greek Thompson church in the city center (larger image) 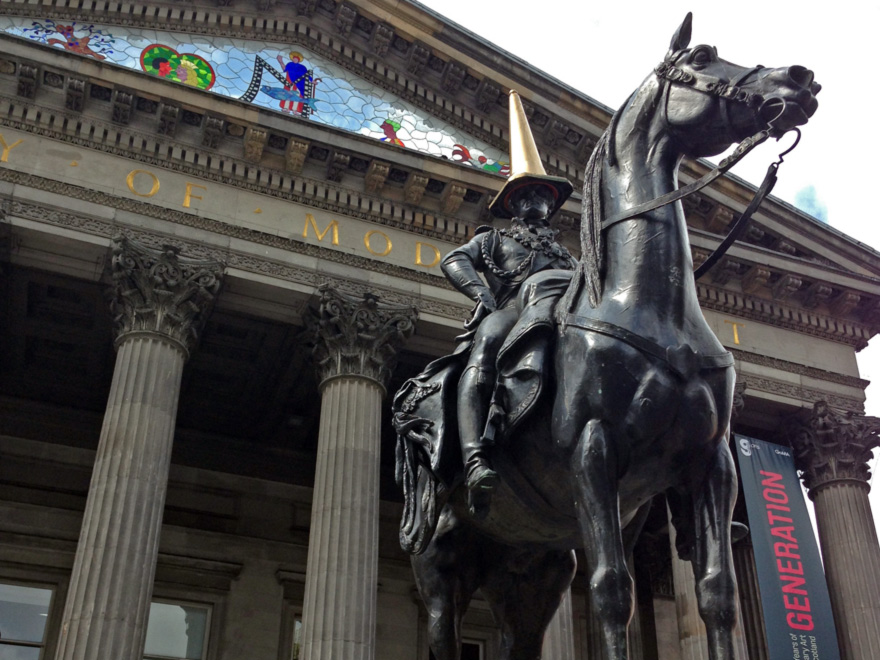 The local newspaper painted the Duke of Wellington's cone gold make to celebrate the record medal haul for Scotland.

The bar stools in the lounge of Blythswood Square hotel are covered in window-checked tweed (complete with jacket flaps) by Harris Tweed; the iconic brand was also used to upholster the lounge chairs in traditional herringbone patterns. 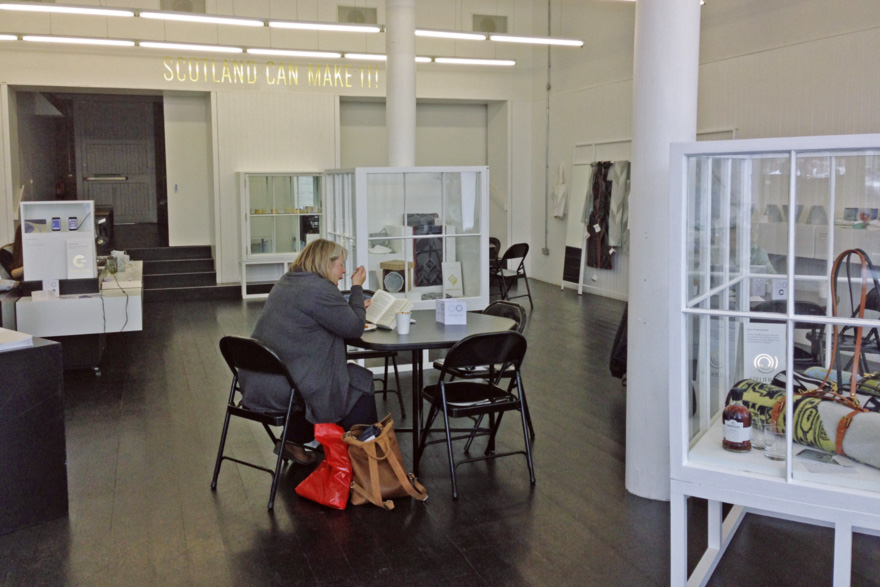 Scotland Can Make It! is a collection of six limited edition souvenirs, designed and manufactured entirely in Scotland. 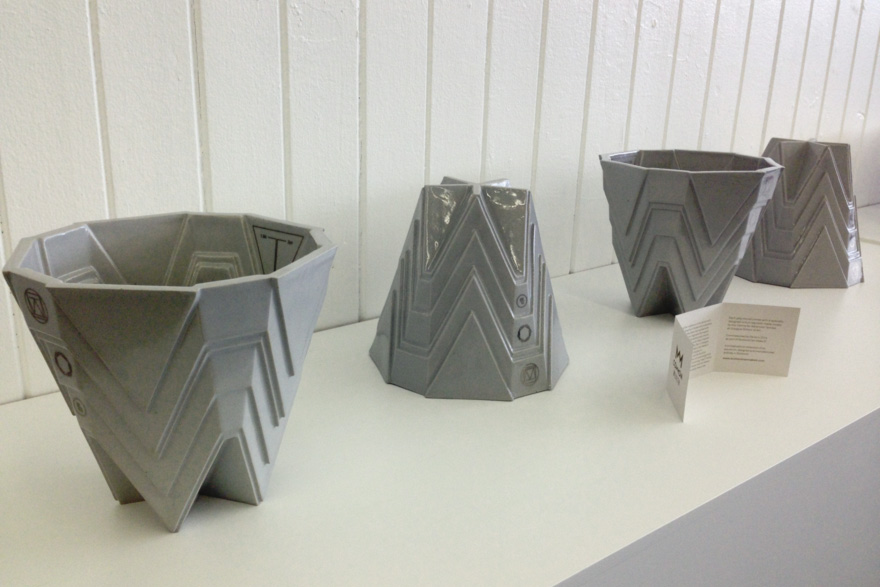 Uniting the traditions of the studio with the iconography of modernist production, ceramicist Katy West has worked with Lochinver's Highland Stoneware to produce a limited edition jelly mold, designed to reflect the Art Deco-inspired interior of Rogano Oyster Bar in Glasgow. 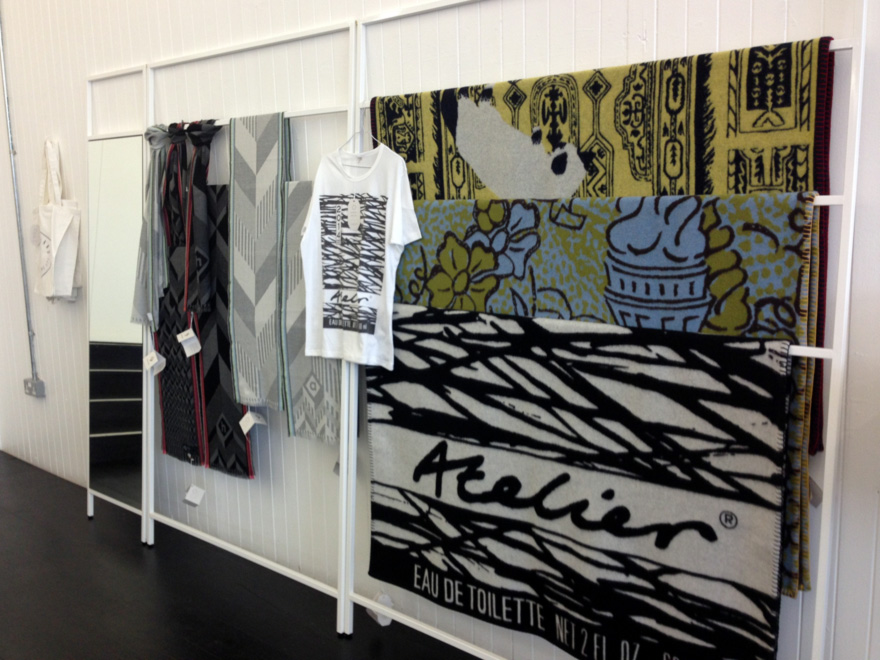 Textile designer Angharad McLaren and graphic designer Emlyn Firth have collaborated with Scottish manufacturer Johnstons of Elgin to create a set of two merino wool scarves inspired by the home and away support of sporting events. The geometric pattern is an abstraction of the herringbone structure of traditional tweed, the original performance fabric, which was worn to protect against the Scottish elements.

Stopping for a spot of tea at one of Charles Rennie Mackintosh's Willow Tea Rooms, where the interiors are as grand as the food. 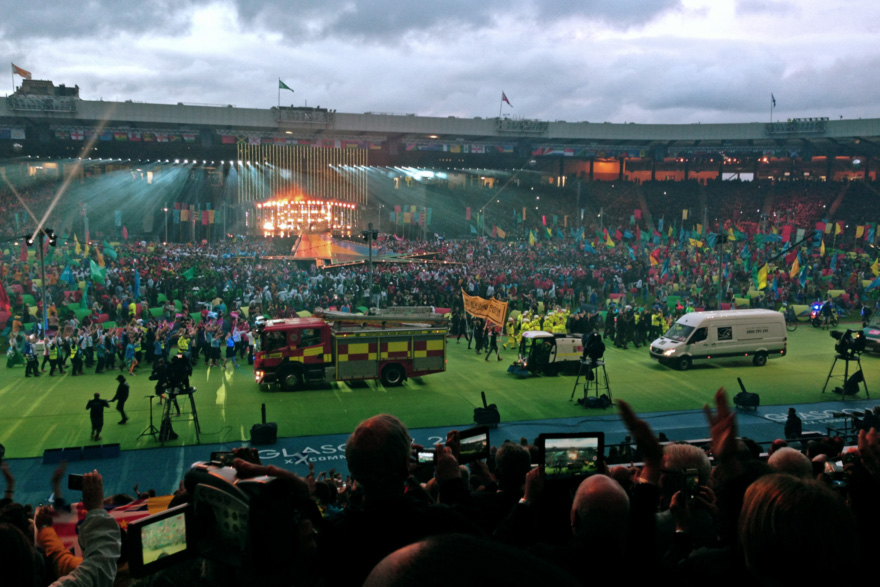 The Closing Ceremony begins with a hearty tribute to all the municipal workers of Glasgow who kept the city ticking over throughout the games. 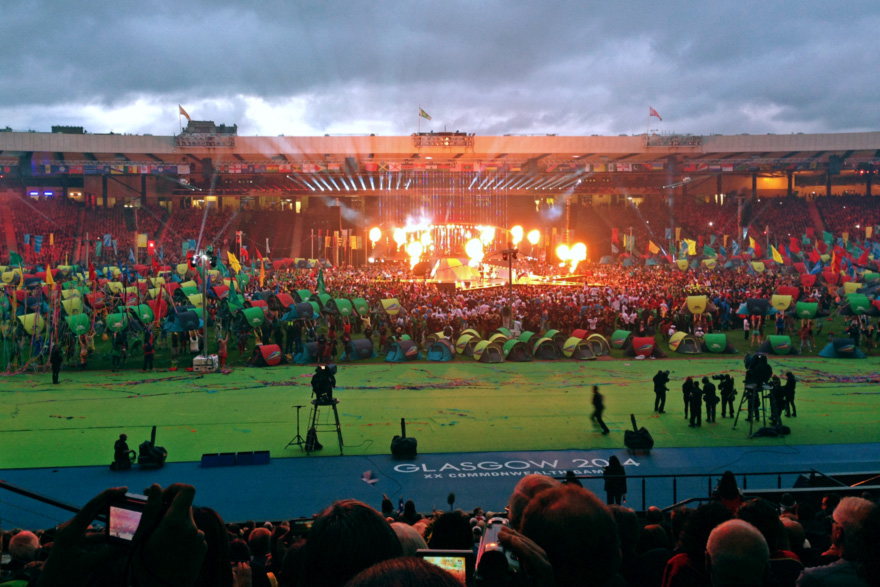 The Closing Ceremony took the theme of a UK music festival. 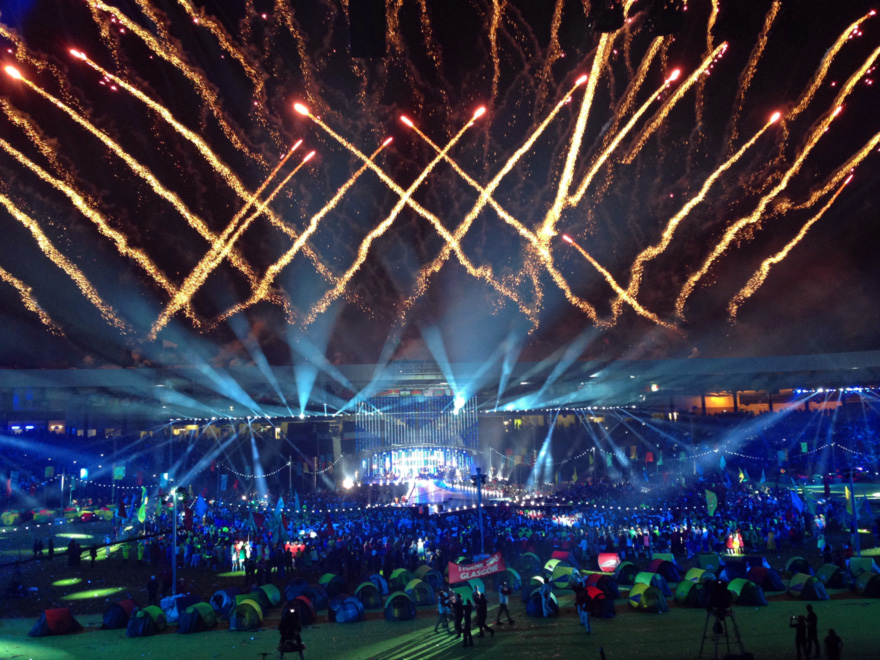 Never has "Auld Lang Syne" rang truer for more non-Scottish people than at the closing of the XX Commonwealth Games.