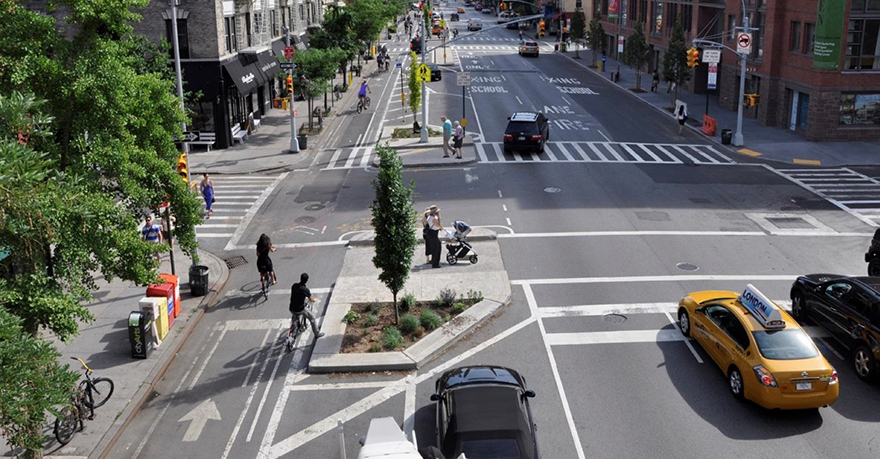 As someone recently introduced to regular bicycling by Citi Bike, New York's bicycle share program, I love bike lanes. I just wish there were more of them; their relative Manhattan scarcity, and my unwillingness to brave the laneless streets with the battle-hardened bike pros, mean I must often choose circuitous routes in order to safely remain a wussy.

I assumed NYC won't add more bike lanes because of the added cost and the resultant auto traffic congestion (more room for bikes means less room for cars). So I was very surprised to read a NYC Department of Transportation study [PDF] released this month that found that adding bike lanes actually increased the flow of auto traffic.

How is this possible? In two words, clever design. But before we get into the details, for those of you not familiar with the style of NYC's newest bike lanes, let's have a look at the old system:

As you can see, placing the bike lane there leaves the cyclist in danger of getting "doored" by someone getting out of a parked car without bothering to look first. And the painted buffer between the cyclist and moving traffic offers zero protection from a car that veers out of control. So in 2007 they started shuffling things around like this:

With this improved design, the cyclist now rides adjacent to the sidewalk. The painted five-foot buffer prevents the cyclist from getting doored by a parked car, which now resides in a parking lane that provides a solid physical barrier protecting a cyclist from colliding with a moving auto. And if you look at the dimensions listed, you'll see the buffer can now safely be reduced by two feet in width, while the bike lane got wider by the same amount.

So right off the bat this second design is smarter than the first, and the numbers bear that out: In 2001, the old-style lanes were in effect. In 2013, the new-style lanes were in existence. And there has been a "75% decrease in average risk of a serious injury to cyclists" in that time period.Now to the auto traffic part. How can you add a bike lane without squeezing out a traffic lane? Well, look at the before-and-after of this stretch of 8th Avenue (between 23rd and 34th Streets): 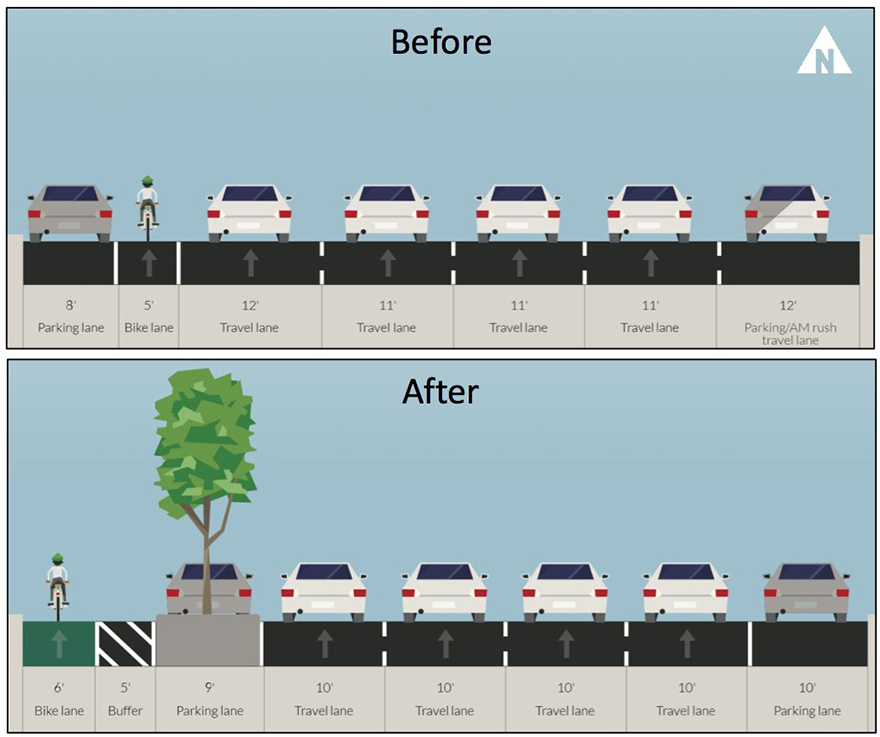 As you can see, they only slightly narrowed the car lanes from twelve and eleven feet wide to ten. This apparently has had zero negative impact on cars, while stealing those feet enabled them to put in a six-foot bike lane with a five-foot buffer. Pretty slick.

It still isn't obvious how making car lanes narrower would actually speed traffic, and in fact, the tighter lanes aren't why traffic got faster at all. The flow of auto traffic increased because of this next clever feature, which arose from a problem. If you look at the diagrams above, you'll see that the bike lanes are always on the left, and cars will of course occasionally need to turn left. (In Manhattan, roughly every other block is a One Way street, with even-numbered streets running east and odd-numbered streets running west.) Making a left turn thus brings that car into conflict with the flow of bicycles. So to get around that, the designers came up with what you see here: 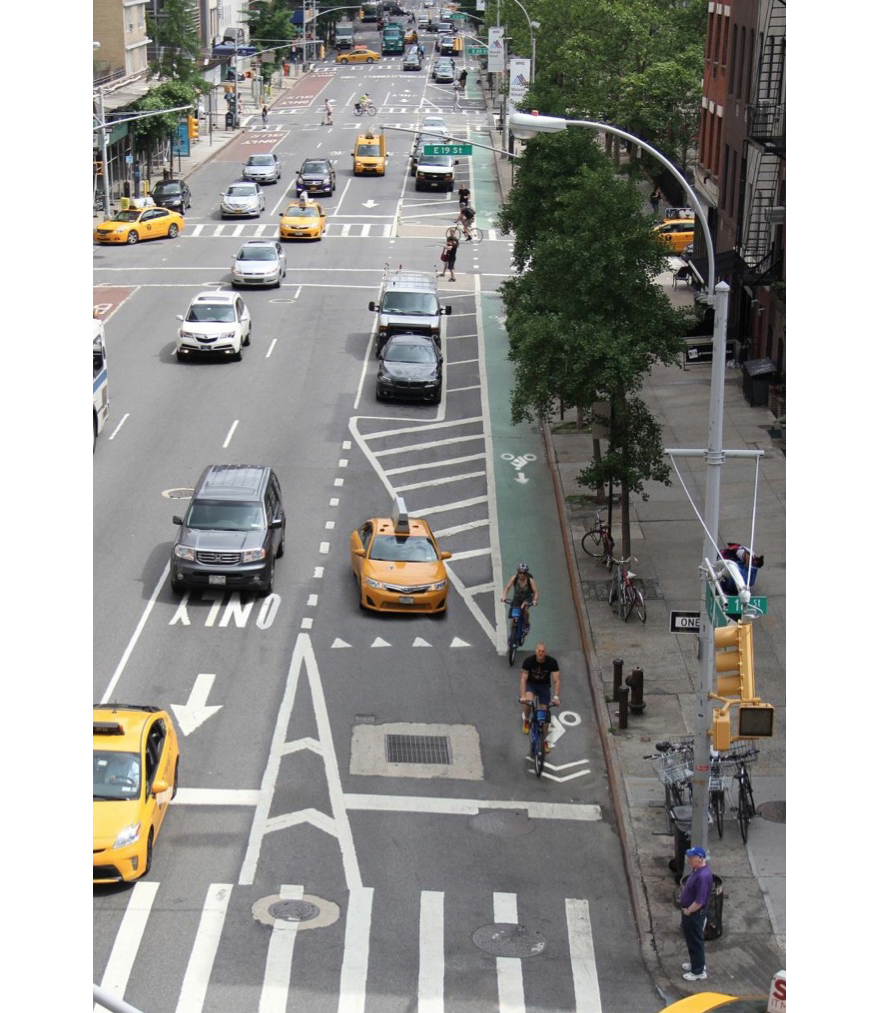 A car that wants to turn left, in this case the taxi with the three black dots on the roof, must pull into this turning lane they've added. What you can't see in the photo is that that taxi is now beholden to a separate traffic light, giving him a red while the cyclists safely zip past along with the flow of non-turning traffic. This turning lane serves two purposes: 1) It forces the taxi to hit the brakes precisely as he's nearing convergence with the bike lane, increasing safety; and 2) it gets that taxi out of the way of non-turning traffic.

As a former Manhattan motorist, I can tell you that getting stuck behind someone waiting to turn causes the most annoying of traffic snags. As the pile-up of cars waiting behind the would-be turner starts to get three and four deep, motorists in that pile-up attempt to edge out into the next lane to go around, causing the cars in that second lane to suddenly slow. This creates a domino effect of congestion. But this design above neatly handles that.

Skeptics might look at the image and think it couldn't have an effect, as the turning lane is so tiny. But the fact is that at any given intersection, the majority of cars are going straight and only a minority of cars need to turn. The numbers prove that this system works: As the DOT study points out, "Travel times on Columbus Avenue have improved while vehicle volumes are maintained," with an average reduction in travel time of 35% between 77th Street and 96th Street during morning rush hour, for instance. Eighth Avenue has seen a 14% reduction in travel time, which is less impressive than 35% but still 14% better than it was before.

On 1st Avenue the results are a bit more mixed, with traffic speeds almost the same as they were before they bike lanes were added; however, during this time they also subtracted one car lane to add a dedicated bus lane, so you'd think the results would be worse.

And safety has of course improved, even as cycling uptake has increased. On a stretch of 9th Avenue between 16th and 23rd Streets, crashes with injuries are down 48% while bicycle volume has grown by 65%. It is impressive that they are able to get these numbers to move in opposite directions.

The figures vary depending on which bike lanes in which part of the city the study examines, and we've largely pulled the most impressive stats out for this entry. But for those of you curious, the DOT has spelled everything out here [PDF]. You can also find more in-depth analysis at both Vox and Citylab.