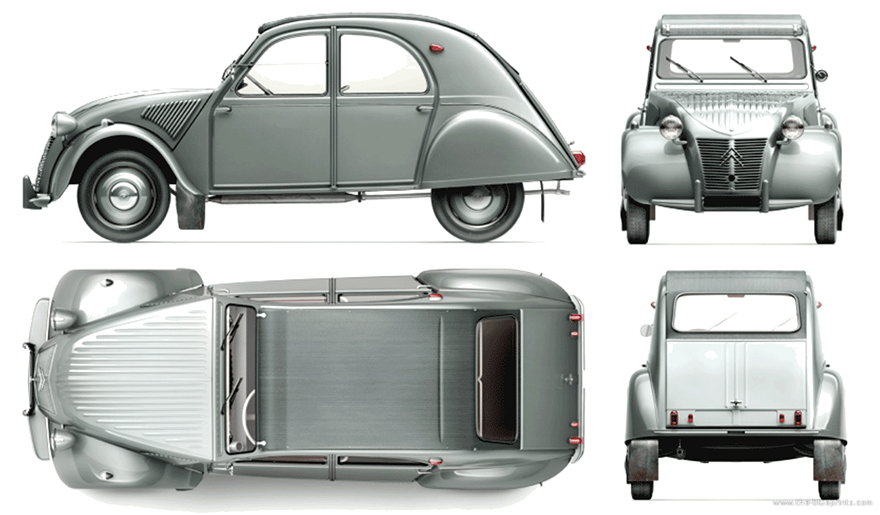 Do you think it was harder, or easier to design cars when your main competition was horses and carriages? Whichever you believe, imagine you're a car designer or engineer and this is the brief you receive:

We need you to design something that's going to remain in production for over four decades.

Maybe you'd stall by asking who the target buyer is and what the car's performance needs are. So they come back to you with

It needs to be able to carry four farmers and over 100 pounds of their goods and harvested crops to market over unpaved roads. And they might be carrying eggs. Yeah, so make sure the car can drive across a ploughed field while it's loaded up with eggs, and that the eggs won't break. Also, sometimes they might need to carry big stuff like furniture, so make sure you design in a solution for that.

As impossible as all that sounds, that was what the development team at Citröen was facing in the mid-1930s, when France was still largely rural farmland. It didn't take long to figure out the car would have to be small to meet the first set of criteria, and the project was dubbed TPV for Toute Petite Voiture, or "very small car."

It took 47 prototypes, but by 1939 the TPV was deemed ready. To achieve the light weight the car was made using a lot of aluminum (which back then was so cheap that over in America Singer had begun building their Featherweight sewing machines out of the stuff). The car's seats were even lighter--they were pieces of fabric slung from the roof by wires, like a hammock. The roof was canvas and could be rolled back like the top of a sardine can, from the front windshield almost all the way down the back to the rear bumper. It only had one headlight and one taillight. But it worked, and it satisfied the brief, so the company came up with a snazzier name—the 2CV, for Deux Chevaux-Vapeur or "two steam horses," and prepared to try a first production batch of 250 cars.

Then World War II broke out.

As the Nazis invaded France, Citröen probably realized that their factory would soon be building Wehrmacht trucks. So under the direction of company president Pierre-Jules Boulanger a/k/a PJB, they started hiding the 2CV plans and destroying all of the prototypes. A few prototypes needed to be saved, however, presumably because they contained some winning formula of engineering that would be difficult to recall, so those were buried underground or hidden in barns. And one prototype was modified to look like a pickup truck so it could hide in plain sight. 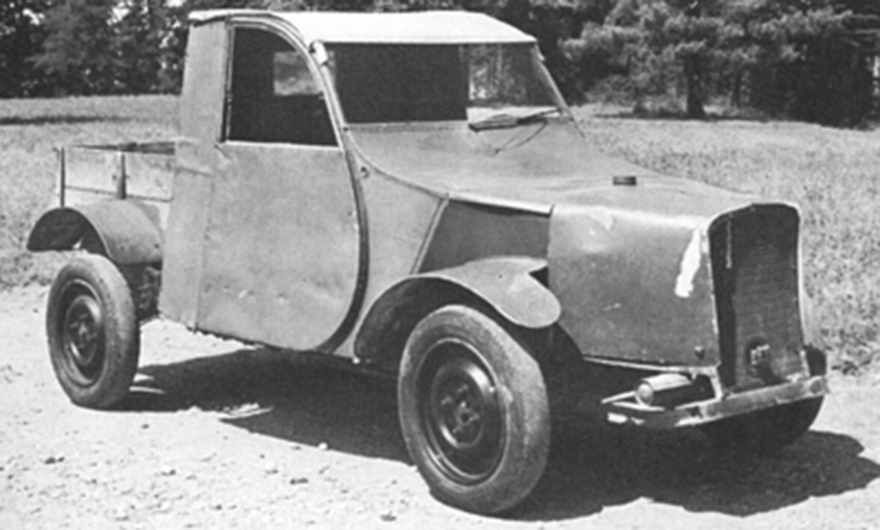 Amazingly, in 1995, three of the original TPV prototypes, the ones that PJB had ordered hidden during World War II, were found in a French barn. 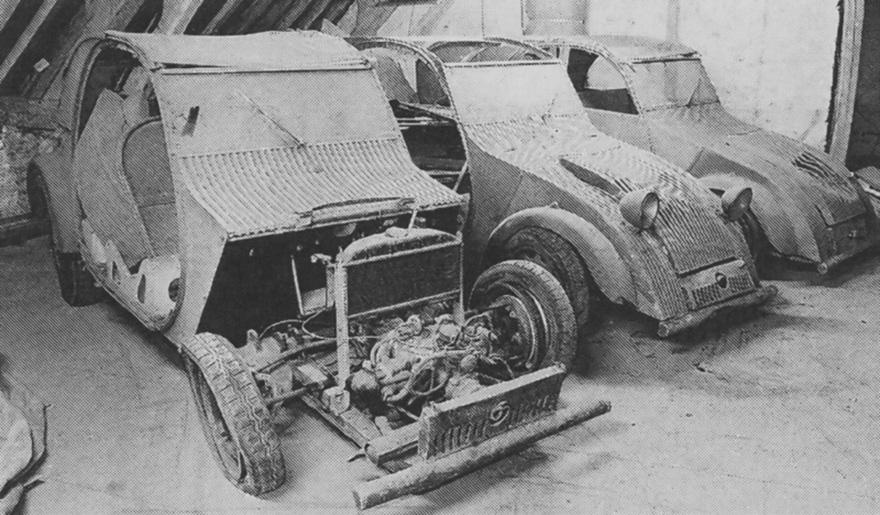 Citröen staff successfully kept the car a secret from the Germans, and continued developing it during the war, even as they were forced to produce Wehrmacht vehicles. (We've mentioned a little about PJB's amusing Nazi-sabotaging efforts here.

After the war ended, resources were scarce, aluminum in particular having grown expensive. The 2CV was redesigned to use steel panels instead. There were other engineering tweaks: The suspension was reworked, the water-cooled engine was jettisoned for a simpler air-cooled one, and something closer to proper seats with a tubular frame were added. The seats, by the way, could be popped out of the car and turned into impromptu picnic chairs. 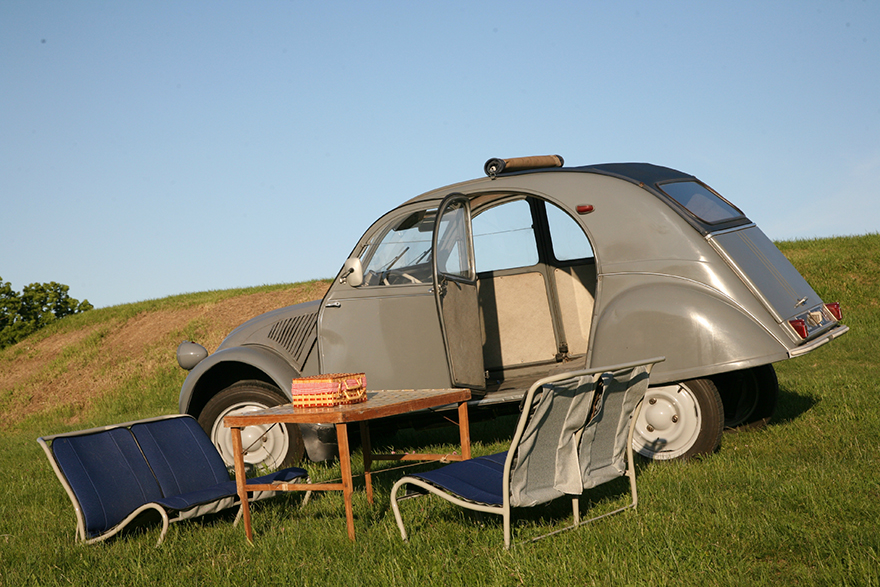 Most significantly from a visual sense, Italian industrial designer Flaminio Bertoni, the same man who had designed Citröen's Traction Avant in 1934, was called upon to redesign the exterior. All told the redesign took three years from the end of the war, but it finally debuted at the 1948 Paris Auto Show. 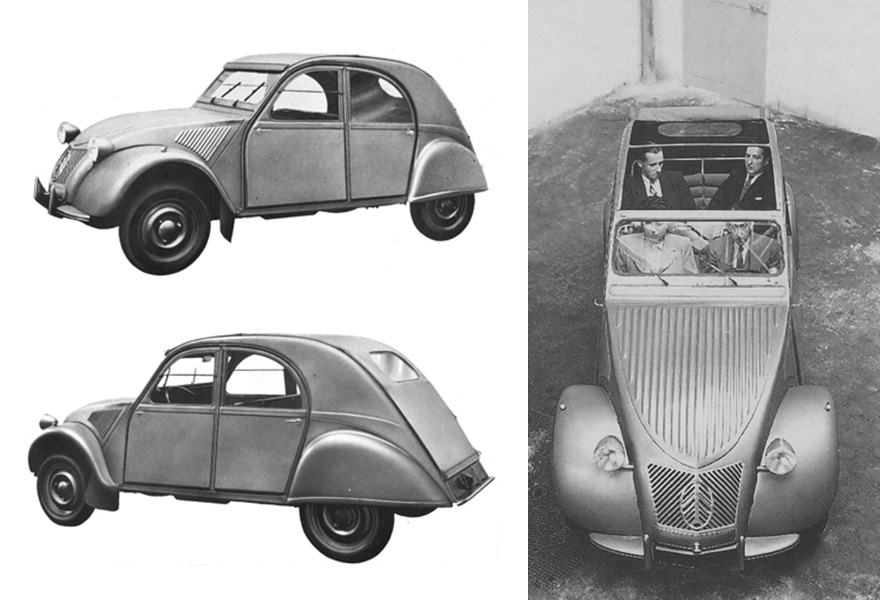 Response was immediate: The critics hated it. What Boulanger and his team saw as a brilliant work of utilitarianism and minimalism, the critics saw as jarringly weird, primitive and unlovable. 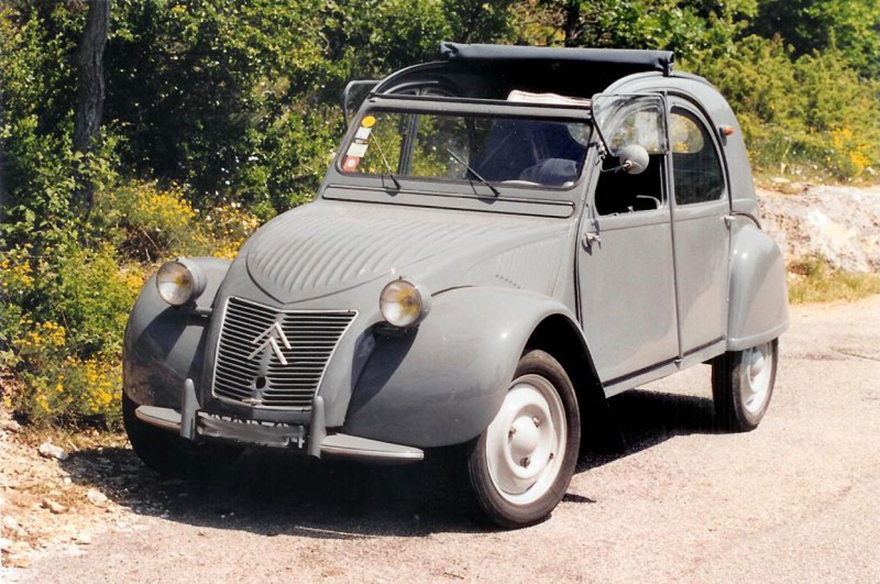 Yet the orders came piling in. 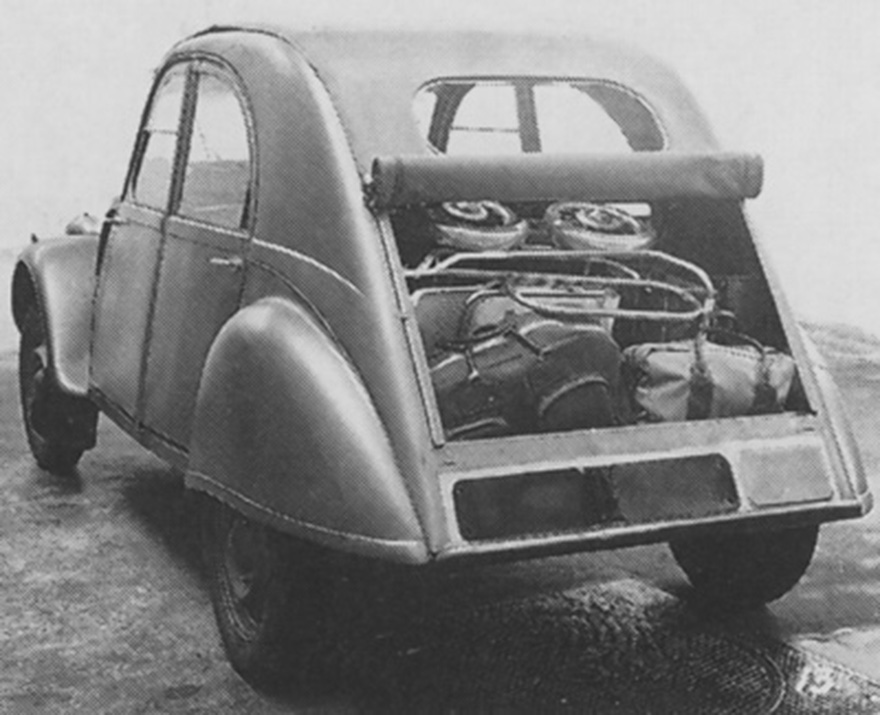 This was a car people could use, a car people could afford, and since the devastating effects of the war had sharply reduced the amount of French automobiles on the road, a car people needed. Shortly after its launch, Citröen was unable to meet the tremendous demand, and the would-be buyers' waiting list stretched to three years. Interestingly enough, according to John Reynolds' Citröen 2CV, PJB dictated that "Priority is given to those who have to travel by car because of their work, and for whom ordinary cars are too expensive to buy," and the company sales reps went as far as to verify individual customers' situations.

The 2CV was truly a car designed for the people, and it wasn't until the 1960s that supply finally caught up to demand. And at that point the car still cost roughly half of what a Volksagen Bug did. In the ensuing years the design was endlessly tweaked, with the underpinnings steadily upgraded, more powerful engines made available, hatchback versions created, off-road packages offered. Sales received a further boost during the '70s oil crisis. 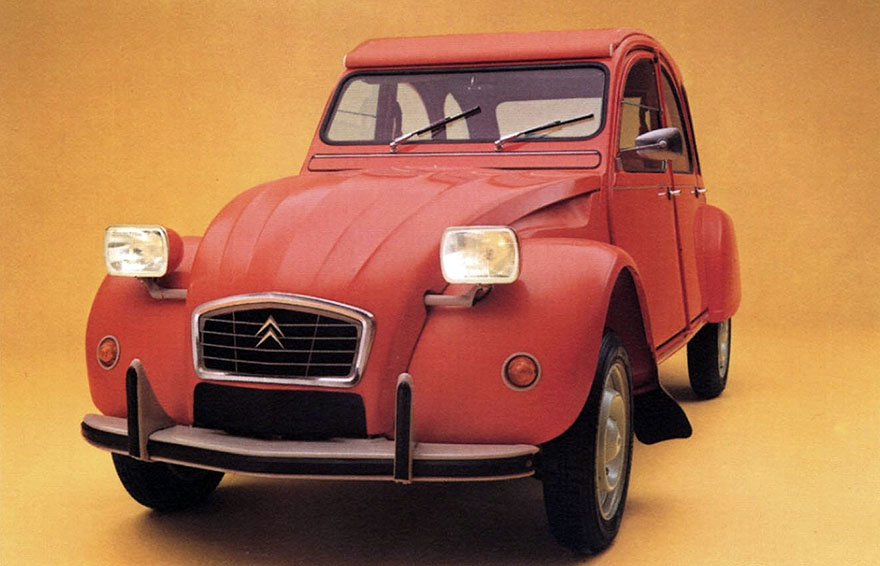 In the '80s, even British ex-military spies were using them--Core77 has managed to acquired this previously classified documentary footage of a 2CV in action. (Warning, turn your volume down.)

The car remained in production until roughly 1990—some fifty years after the TPV was first conceived—and Citröen sold nearly 4 million of them, or nearly 9 million when you count all the variants. YouTube is awash in videos of the 2CV in action, but the best and most comprehensive we've found is British automotive journalist Chris Harris' "The World's Best Car" video: