In the Details: A Children's Backpack That Incorporates Toys—and Can Become a Toy Itself 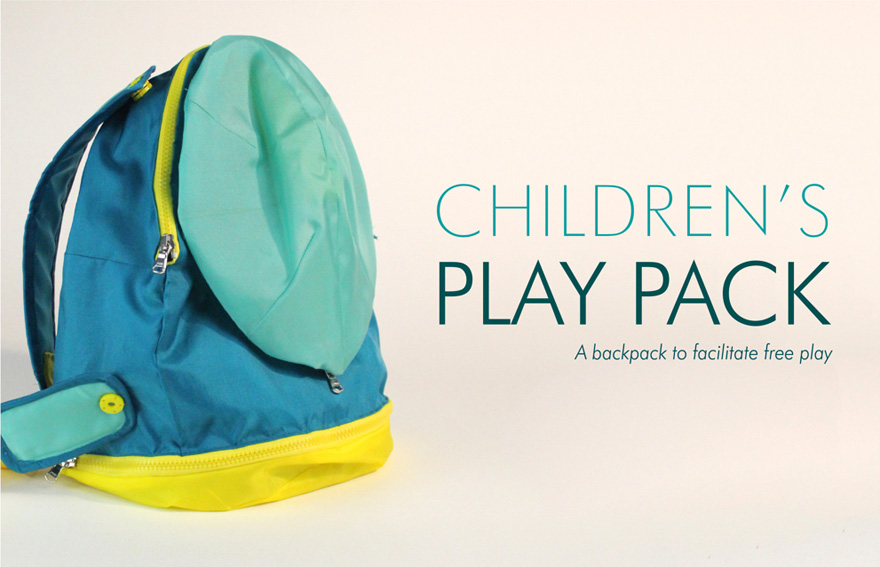 While studying abroad in Denmark during the fall of 2013, Meg Czaja toured Lego Headquarters and was disappointed with what she saw. For a class at the Kolding School of Design focused on the topic of play, the designer explored the toymaker's facilities, becoming increasingly disillusioned with the company's outlook on children in the United States. "One of the speakers, whom I believe worked in marketing, said that children in the U.S. don't know how to use Legos without instructions, which is why they are now sold in sets," Czaja says. "Rather than trying to challenge the notion, this mentality was driving their current designs—in lieu of a child's capacity to create. I found it to be incredibly troublesome."

That experience stuck with the Pratt MID candidate when she came back to the States, as she actively sought out opportunities to design for children's unrestricted, self-prompted play. The perfect opportunity came last spring in a soft-goods class taught by Rebbecah Pailes-Freedman. Given the task to design a backpack that incorporated an inherent social message, Czaja naturally gravitated to the topic of free play. The result is the PlayPack, which incorporates toys in its construction and can even become a toy itself.

Czaja kicked off the 14-week project with a comprehensive competitive analysis of existing backpacks. Making trips across New York and New Jersey, Czaja visited Target and REI stores to take photos and gather information about the bags they sold. Focusing on the bag construction, she looked at materials and the way zippers and other fasteners were handled, along with other features. "I think I examined over a hundred backpacks," she says. Czaja sketched out potential designs, honing those down to a final ten to present to her class. 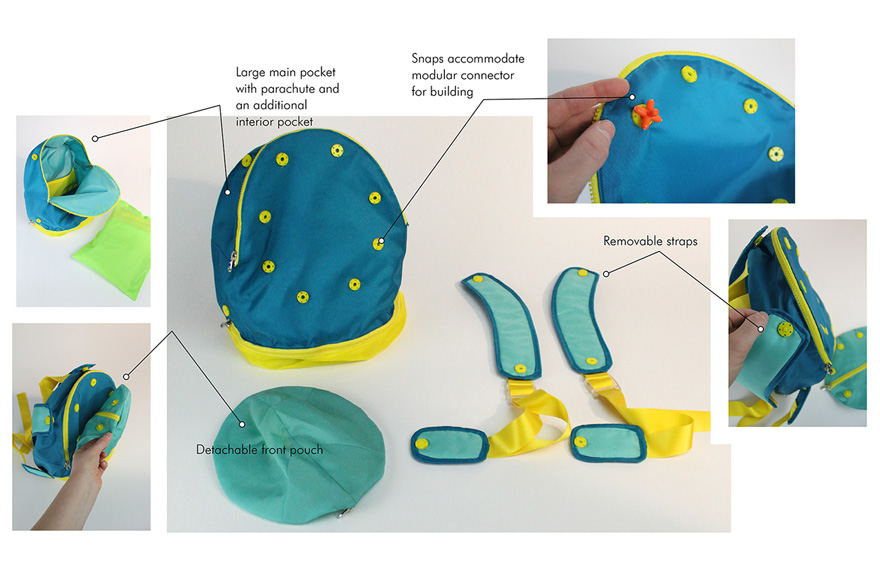 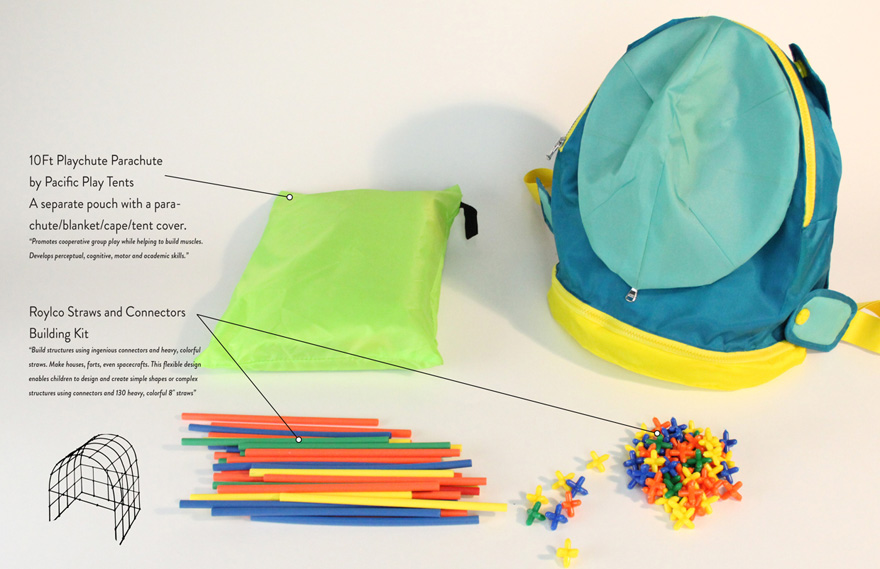 In an effort to make the experience similar to that of a client/designer relationship, the professor picked the final direction for PlayPack, and then Czaja had to execute it. Designing and prototyping happened concurrently as the designer spent a few days mocking up the paper backpack from craft paper and masking tape on a child-sized mannequin, while simultaneously figuring out how the pack could be played with as individual pieces. "What if the bag itself became a toy that could be used in conjunction with the objects it held?" Czaja asked herself. "The form came from there. I never wanted the bag to be a toy in typical terms. I wasn't aiming to make a backpack that looked like a rocket ship or an octopus because, overall, that's limiting."Once they were pleased with the mockup, Czaja marked the grain lines of the bag (also known as a fabric's warp or weft), the seams and the spots where pieces needed to align. As the warp thread tends to be stronger, Czaja paid extra care to make sure that larger pieces were laid correctly to prevent them from stretching out of shape—all lessons learned the hard way in this first endeavor in manufacturing soft goods. 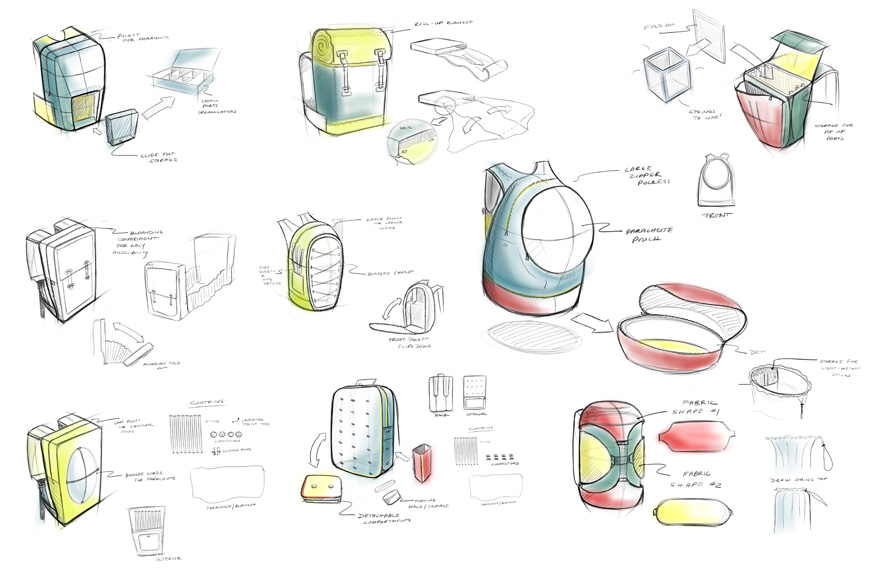 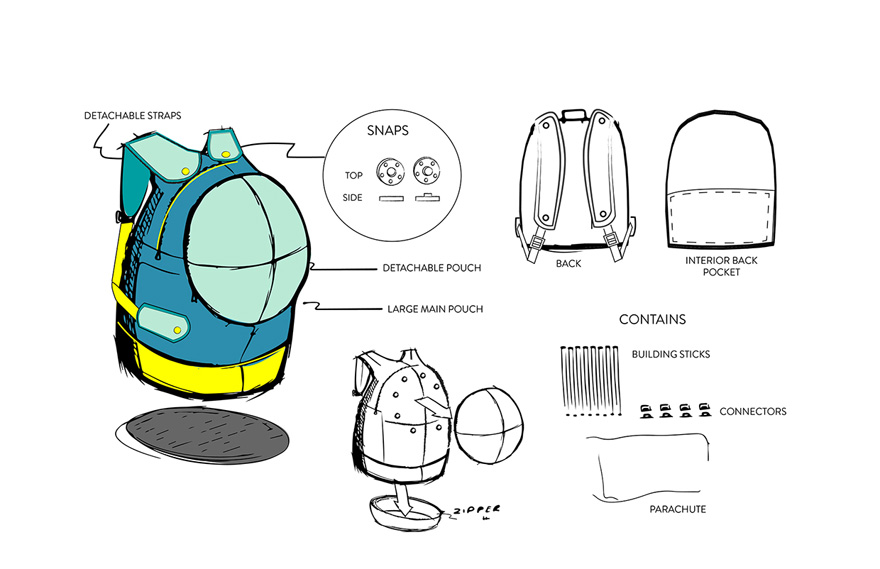 The bag was then cut down the middle with one half disassembled to use for the pattern, and the other half left for reference. Laying each cut piece of the paper mockup on pattern paper, Czaja traced it using a tracing wheel, drawing lines in pencil and leaving a quarter-inch seam allowance along the edges of the pattern. Some pieces, such as the back, were made by folding the pattern paper in half prior to tracing so that each side would be identical. ("Like you would make a heart out of construction paper," Czaja explains.) The designer based the zipper placement on bags she saw during her initial research. The final tracing was then "trued" to ensure that all of the seam lines and measurements were accurate.

A muslin mockup of PlayPack was constructed from the pattern, including all the fixings: lining, padding, straps and zippers. Czaja painstakingly pinned and sewed each piece, ironing the seams to keep the edges crisp. Once the mockup was complete, she flipped it inside out—only to discover that it was too small. She had to start over with new paper and muslin models, and then repeat the process one more time with the final fabric to produce the first prototype. "The pattern making was the most time consuming, and truing patterns is actually more complicated than I thought it would be," says Czaja. "You can't guess and you can't be inaccurate, or none of the pieces will line up. Aside from that, the sewing on an industrial machine was also difficult. I had zero prior experience and the industrial machines are incredibly fast. That paired with slick fabric made for a lot of trial and error. That and starting all over again, but sometimes it's just what you have to do."

The initial snaps for PlayPack's proof of concept were made using straws and plastic scraps, which laid the groundwork for a Solidworks model. However, the final 3D-printed pieces failed to work correctly, so Czaja turned to the savior of many student design projects: Zap-A-Gap. Laser-cut acrylic from Canal Plastics in NYC was glued together and hand-sewn onto the final prototype, which was made of 200-denier UV-resistant flag cloth with straps of 1.25-inch nylon webbing. While Czaja wanted to create every piece of the PlayPack herself, time was running short, so she turned to Roylco Straws and Connectors and a Pacific Play Tents parachute ordered from Amazon as the components of the bag. "I had wanted something even more modular than the prototype ended up being, but was limited by time and skills to produce it myself," Czaja says. 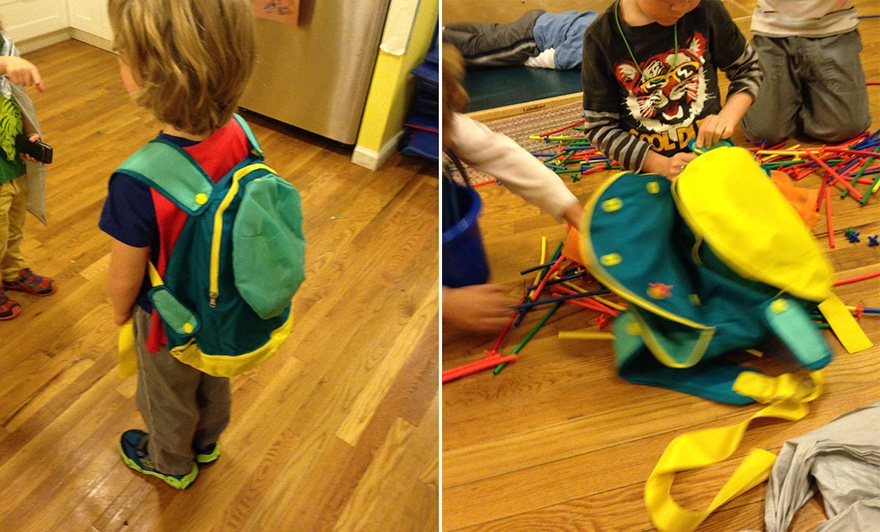 User testing revealed that children were more interested in the contents of the bag than the PlayPack itself, something Czaja suspected. "I knew the bag wasn't quite modular, rigid or intuitive enough to be truly successful as a toy itself, and it was tossed aside pretty quickly," she says. "Though I did have a moment of triumph when one of the kids put the front pouch on his head and wrapped himself in the parachute!" Since it took the full semester to get to the user-testing stage, not much time was left for further iterations, but Czaja intends to keep working on the design.

Meanwhile, she's also working on her Master of Industrial Design thesis, which will also likely focus on the topic of play—although to what extent and in what specific areas remains to be seen. "It's such an integral part of life and it so often gets pushed aside in favor of more 'practical' activities," Cjaza says. "It's become an essential part of my process and manages to find its way into most things I do."

In the Details: A Children's Backpack That Incorporates Toys—and Can Become a Toy Itself