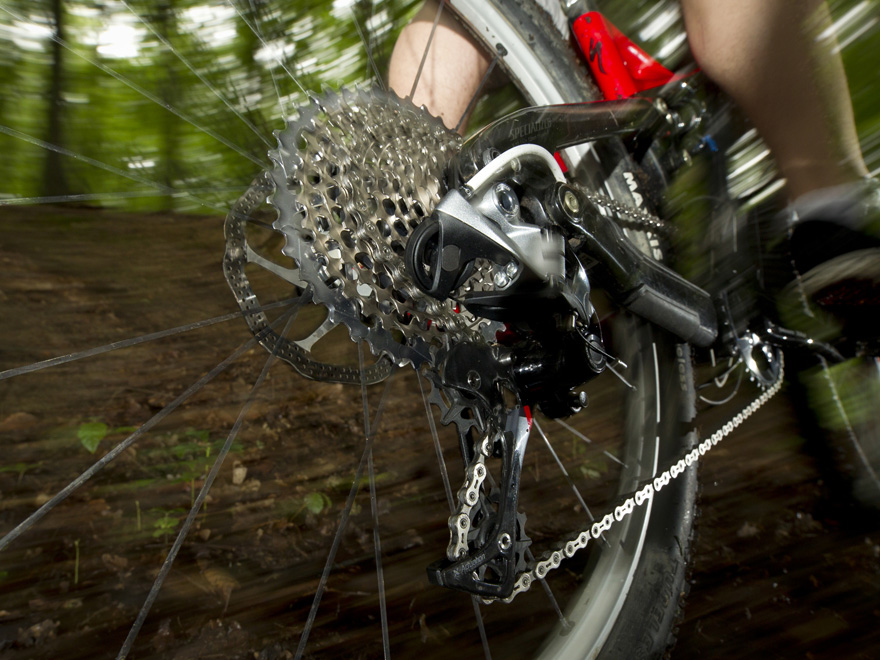 Founded in 1987 by three engineers, SRAM became known in the cycling world for Grip Shift road bike shifters, the first ergonomic, indexing shift levers that easily allowed a rider to change gears without removing their hands from the handlebars. Easy-to-use and ultra-simple (they were made of just three parts where a typical shifter from Shimano was composed of nearly 30 pieces), Grip Shift established SRAM as a company that could innovate unique solutions to complex engineering design problems. Acquiring 100 year-old German manufacturer Sachs in 1990s allowed SRAM to broaden its immediate offerings to chains, derailleurs and ultra-complex internal hubs. It also gave SRAM the ability to develop and iterate new drivetrain products at a level that was not previously possible.

Multi-gear bicycle drivetrains have been around for over 125 years and, while there have been a steady stream of incremental improvements, there hadn't been major steps forward in decades. With gearing systems becoming more complicated as riders searched for more gears to tackle varied terrain, a simpler solution was needed.

SRAM's acquisition of Sachs and their massive development center in Schweinfurt, Germany, set the stage for drivetrain innovation, with Sachs' history of making simple and intuitive drivetrains for urban consumers. In fact, Sachs had some existing products that would prove instrumental in the development of a mountain bike drivetrain with just one ring. In 2010, working out of the old Sachs factory in Schweinfurt, Germany, a team of engineers led by American Chris Hilton began to develop the 1X system, inspired by modifications made by top professional cross-country racers. 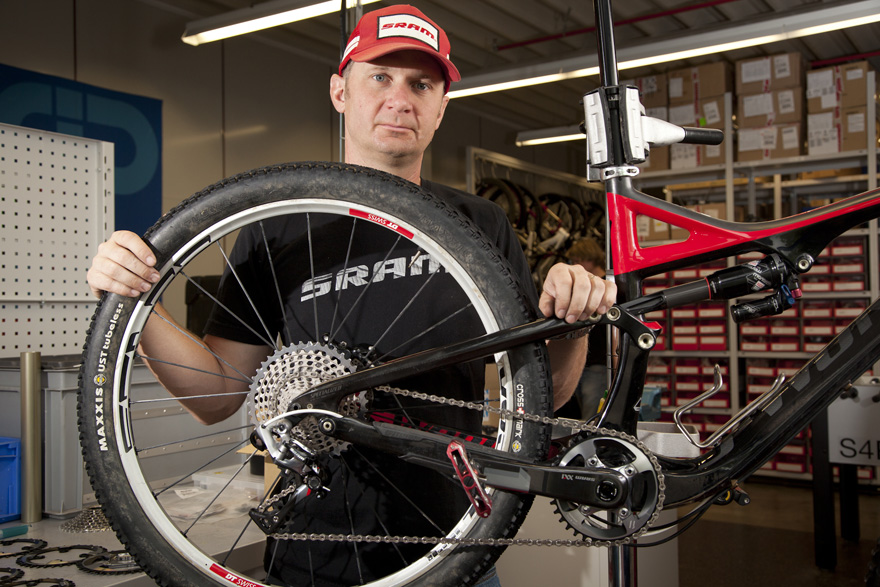 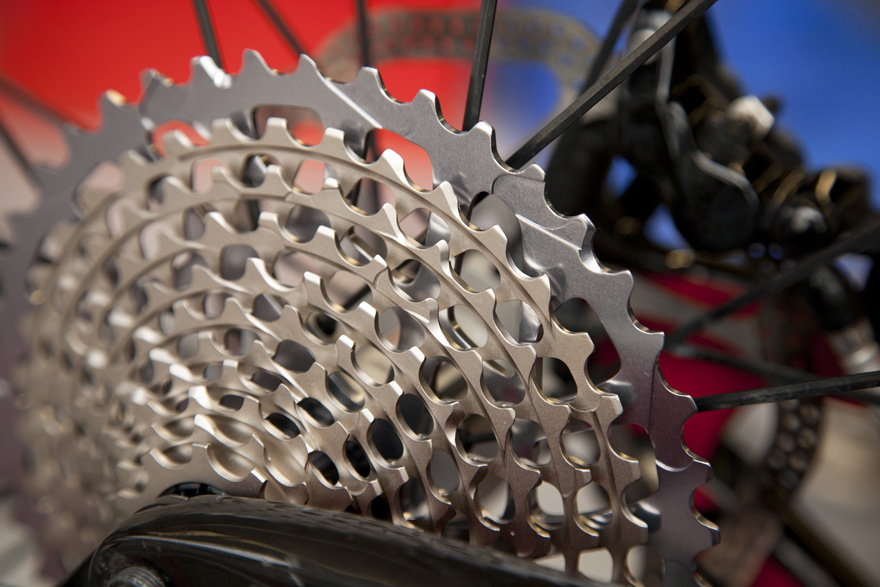 An integral part of the 1x system, the 11-speed X-DOME™ 10-42 tooth cassette delivers an incredibly wide gear range while maintaining even, optimized steps

SRAM's two-chainring system (2X10) was becoming wildly popular by 2010, replacing the established three-ring set up. Most component companies were offering a 10-speed rear cassette instead of a 9-speed which allowed a comparable gear range to the three-ring set up. However, elite cross-country professionals, always in search of the lightest solution possible, took things further by using only one ring in front. SRAM quickly took notice and set out to design a mountain bike component system like nothing the market had seen before. By assessing the needs of the athlete and building the new system from the ground up, the German engineering team wanted to design a dedicated 1X system that made vast improvements to what existed at the time. 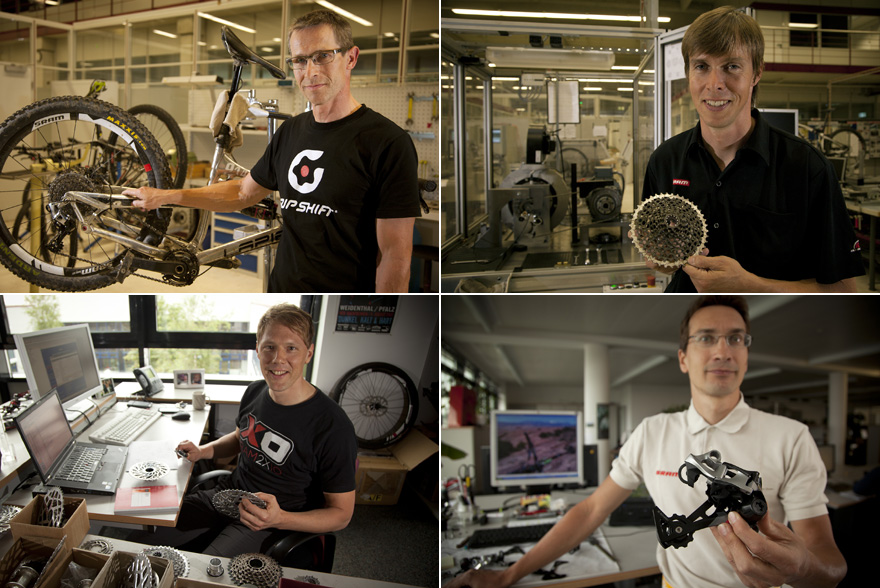 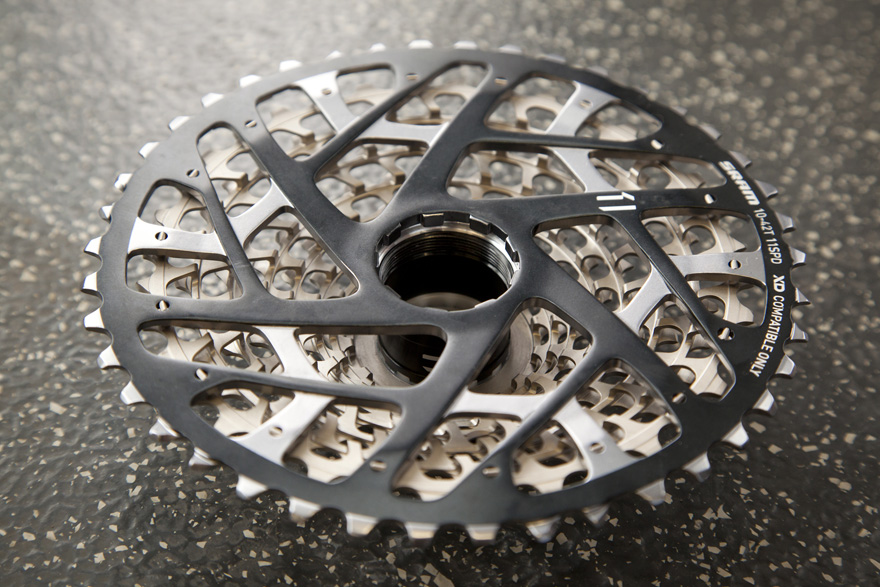 A Puzzle in Three Pieces

By chance, one of the lead drivetrain engineers was rummaging through a shelf of old prototype parts one day and came across a rough example of a rear derailleur that was built specifically for a one-ring downhill bike made before 2000. Dubbed 'Straight P' by the engineers that created it, the prototype featured a straight parallelogram that kept all chain movement limited to the horizontal axis and kept a constant gap between the top pulley of the rear derailleur and each cog on the cassette thus reducing chain slap and ghost-shifting. Most rear derailleurs at the time used a slant parallelogram to move the gears up and down the cogs, a design that is necessary to maintain proper chain tension when the bike has more than one chainring on the front. But, since the market for single ring bikes was tiny at the time, the project was put on the back burner. With the push for a single ring system that could work on any mountain bike, the design and technology packed into Straight P suddenly became a key piece of the 1X puzzle.

The second piece of the single-chainring drivetrain puzzle was making a chainring that would hold the chain in place on the bumpiest trails, without the heavy complex chain guides used by downhill racers. Reaching back into their pile of prototypes and old production parts, the SRAM team grabbed a chainring that had been created earlier for an urban bike drivetrain that used an internally geared hub. After fabricating prototypes using a tooth profile based on this urban drivetrain, the team headed to the mountain bike mecca of Moab, Utah. The group rode Porcupine Rim, one of Moab's most demanding trails, over one hundred times. They found their prototype Dual Drive rings worked well, but not perfectly. With some tweaks aimed at keeping the chain on the ring through the top of the rotation, they knew they'd have it. 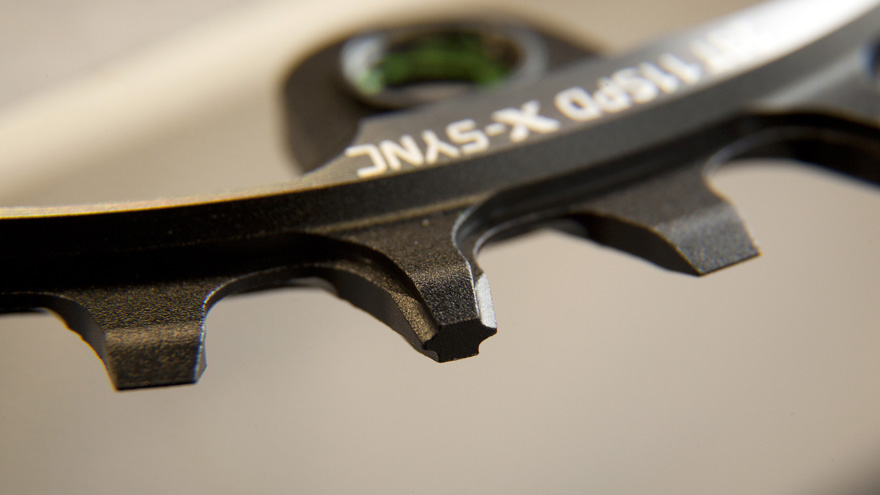 Each tooth's thickness is precisely CNC-machined to support the chain's inner and outer links perfectly.

Returning to Germany, the team refined and finalized a design called X-Sync. By alternating between wide teeth and narrow teeth on the chain ring, X-Sync perfectly mirrors the chain's different width inner and outer links and allows for maximum chain control. "The thick and thin teeth are not the only secret to how X-Sync works," said Hilton. "We knew we had to engineer and control every part of the design of the drivetrain to ensure that 1X would work right out of the gate because if early users had a bad experience, it would be dead on arrival."

The final piece of the puzzle wasn't found laying in a box of old prototypes but came fresh from the SRAM engineers that designed SRAM's rear gear cogs, or cassettes. To achieve the necessary range of gear ratios to make a single-ring system rideable on varied terrain, a much wider range rear cassette was needed. An added benefit was that larger rear cogs (which make for an easier gear) were actually more durable and better shifting than smaller cogs. After countless iterations, they settled on an 11-speed cassette with a range from 10 gear teeth to 42, almost 25% more range than existing 10-speed rear cassettes. 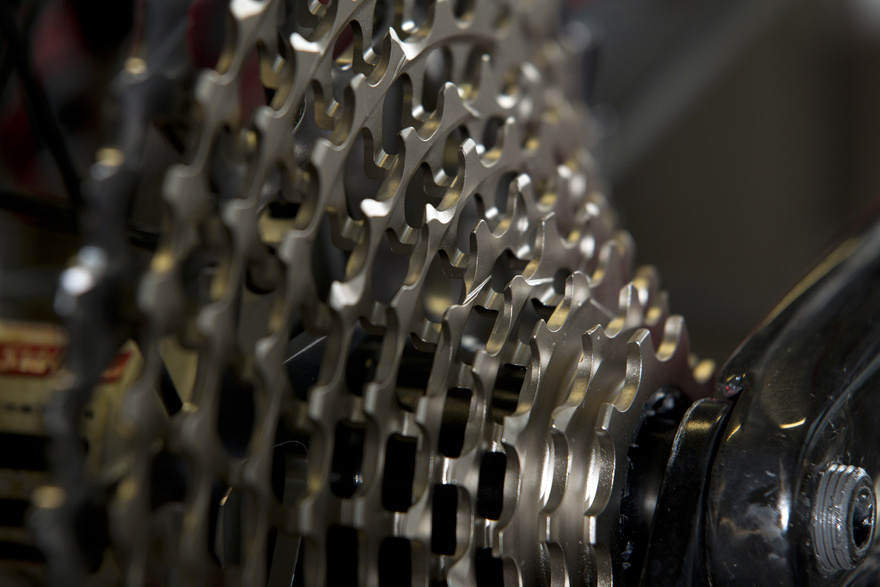 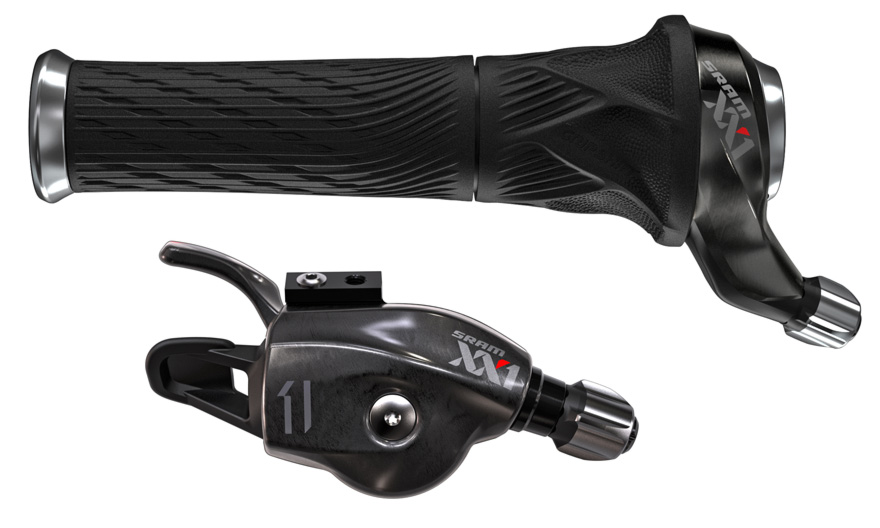 Thanks to a large and talented team, a corporate history of drivetrain innovation, and the momentum of their 2×10 system, SRAM was able to bring 1X to market in less than a year. But would anyone other than a few top racers use it? Early sales projections were for small quantities, mostly targeted at elite athletes. Those conservative estimates were blown away within weeks of announcing the availability of the initial 1X drivetrain.

SRAM 1X turned out to be a game changer not just for racers but for the entire mountain bike market. The low weight, simplicity, durability, and performance of SRAM 1X has proven successful in every form of competitive MTB in the world: not only have Cross Country and Downhill world cups and world championships have been won on 1X but the world's biggest slope style event (Crankworx) and big mountain competition (Red Bull Rampage) have also been claimed by riders on SRAM 1X. It has been raced to Olympic gold medals and Enduro World series overall victory.

To date, SRAM has introduced a total of four 1X-powered drivetrains for all types of mountain bikes and riders in two years. The feeling at the company and in the cycling industry is that it's just the beginning. 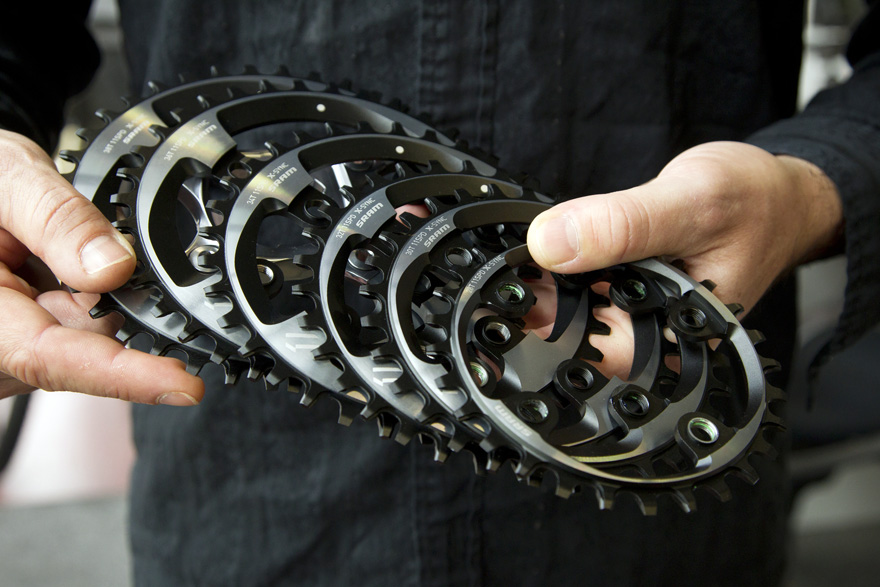 An array of front chain ring options for the 1x system. 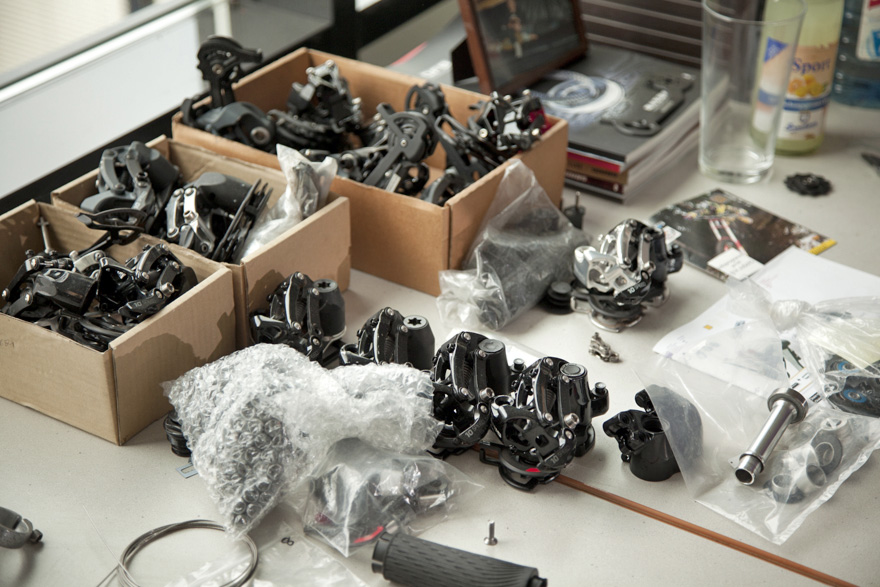 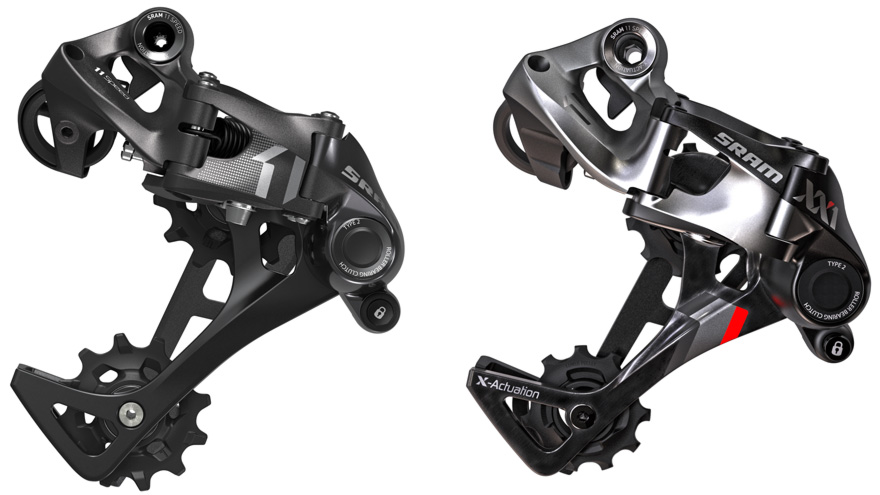 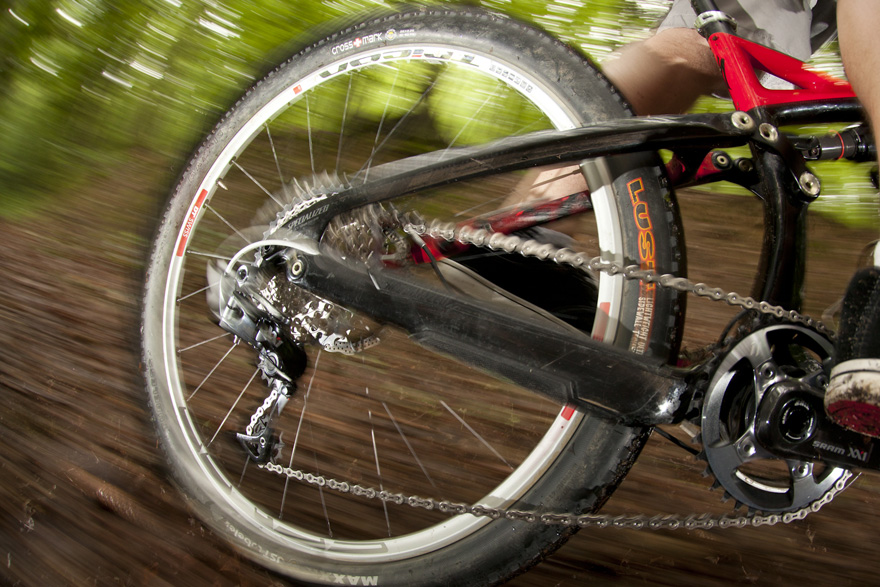