Peter Marigold on Demonic Voices, Porridge Addiction, and the Value of Blind Ignorance in Design 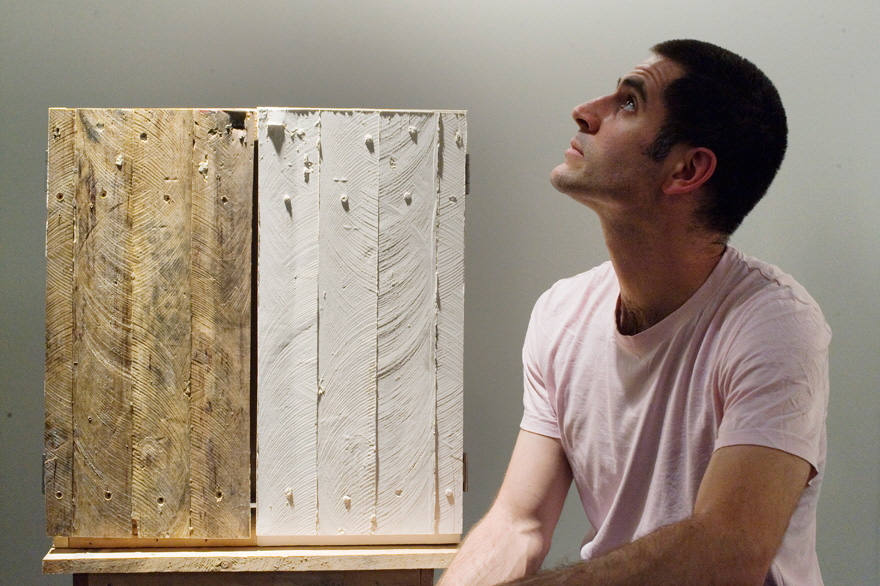 This is the latest installment of our Core77 Questionnaire. Previously, we talked to designer and design educator Josh Owen.

Occupation: I'm a designer and maker of objects

Current projects: For the London Design Festival, I did an exhibition at Gallery Libby Sellers, who I've worked with for a long time. I made a large series of tables with this kind of warped wooden texture. There's no wood in the exhibition, but it's called Wooden Tables.

I also recently completed a project for an organization called Workshop for Potential Design—I created a series of objects that are based on making the invisible visible. And I'm designing a doll's house interior as well. That's for an exhibition at the Museum of Childhood, who I've designed some furniture for in the past. They're doing an exhibition of contemporary dolls' houses, so I'm doing one of the rooms in a doll's house.

Mission: God, I don't know—I just kind of graduated into doing things; I don't have any kind of game plan at all. I just get up in the morning and start doing things. I've never been the sort of person that plans, really. 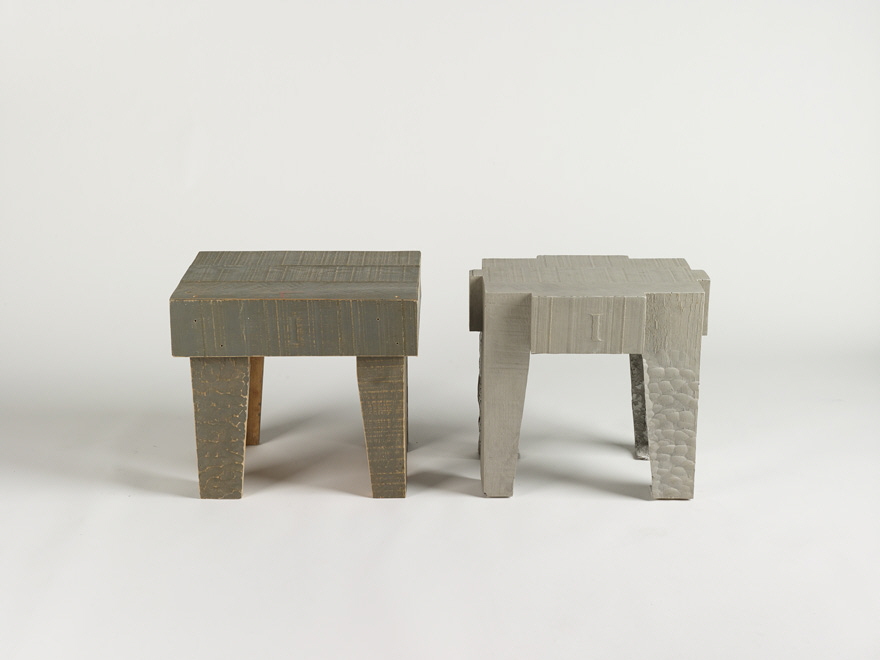 Above and below: furniture from Marigold's recent Wassamassaw series 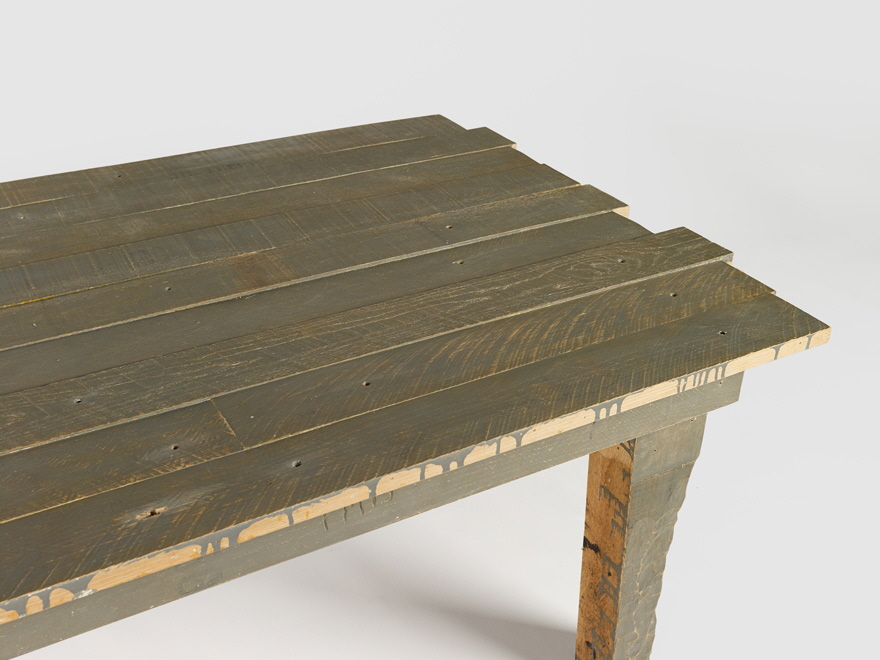 When did you decide that you wanted to be a designer? I knew from when I was a little boy—like, three or four years old. I was really interested in buttons and switches and doors, in taking objects apart and putting them back together. I always wanted to be part of that object world. And I've finally ended up doing that. I've taken a lot of wrong turns along the way, but I've ended up doing that now.

Education: I studied sculpture at Central Saint Martins. I never really wanted to be an artist, but I got pushed into doing art, which was a bad wrong turn. So I ended up, finally, going back to the Royal College of Art and studying product design. But that was after lots of jobs in scenography and making props and models and costumes and things like that. So I've had quite a broad range of types of employment and experiences.

First design job: I've only ever tried to get one job in design. I went for a job at Thomas Heatherwick's, and they told me that I should go into advertising. It was crushing. So I gave up on that. I realized I'm pretty unemployable, so I just do this now.

Who is your design hero? Donald Judd. I find him amazingly pure in one way, because obviously he made these incredibly pure objects. But at the same time it's not clear-cut; they're very complex objects. And I like the fact that there's this kind of weird ambiguity in such simple things. 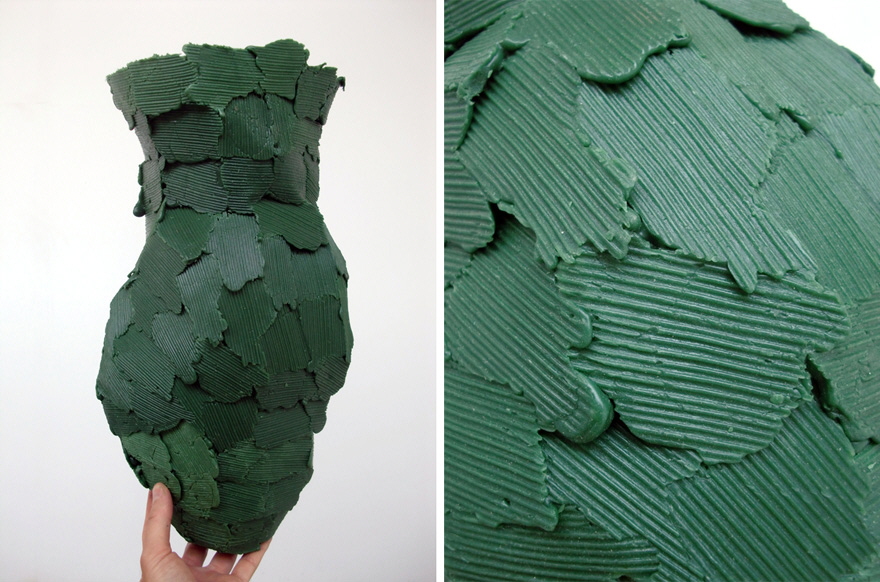 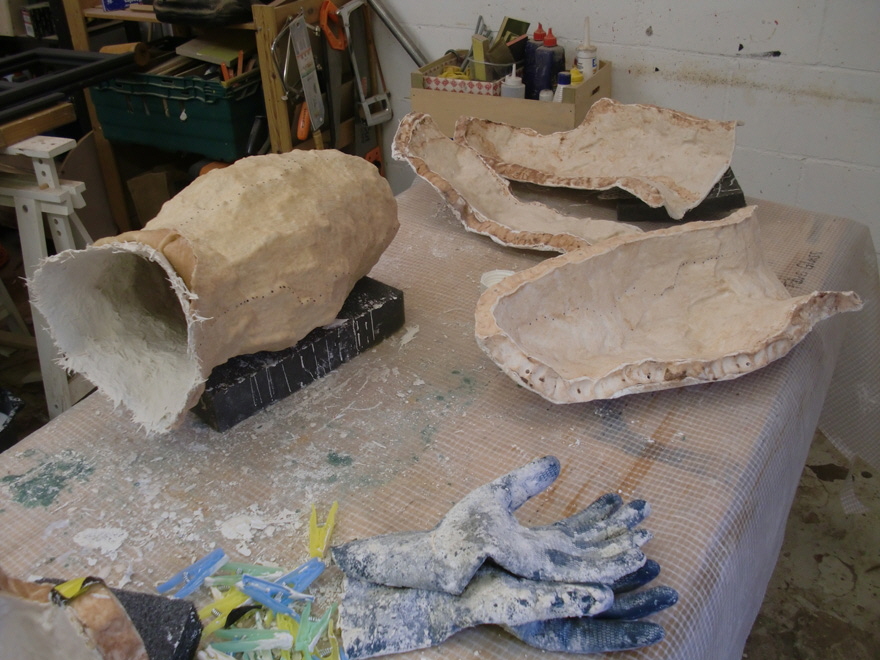 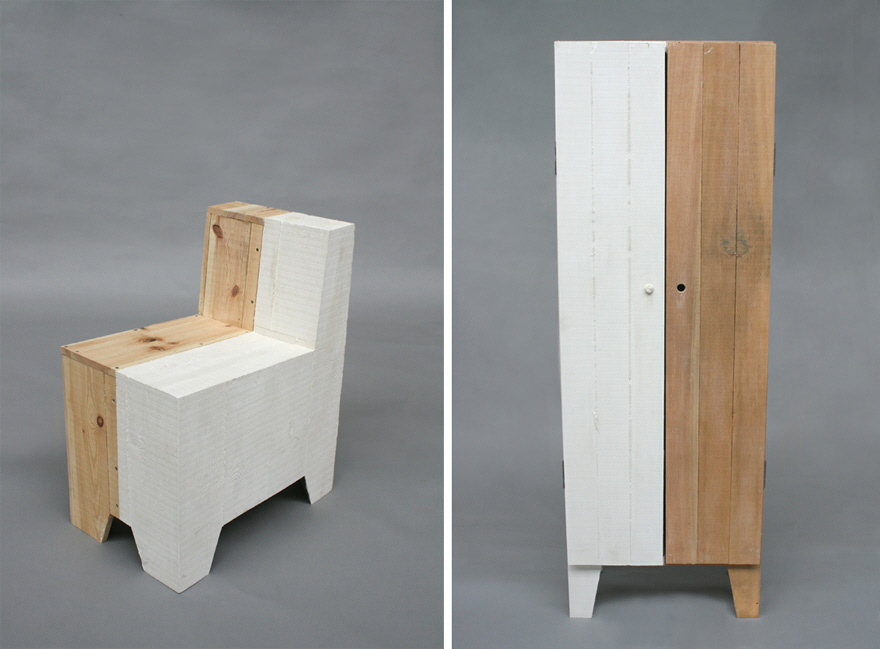 Above and below: a chair, wardrobe and bench from the Palindrome series 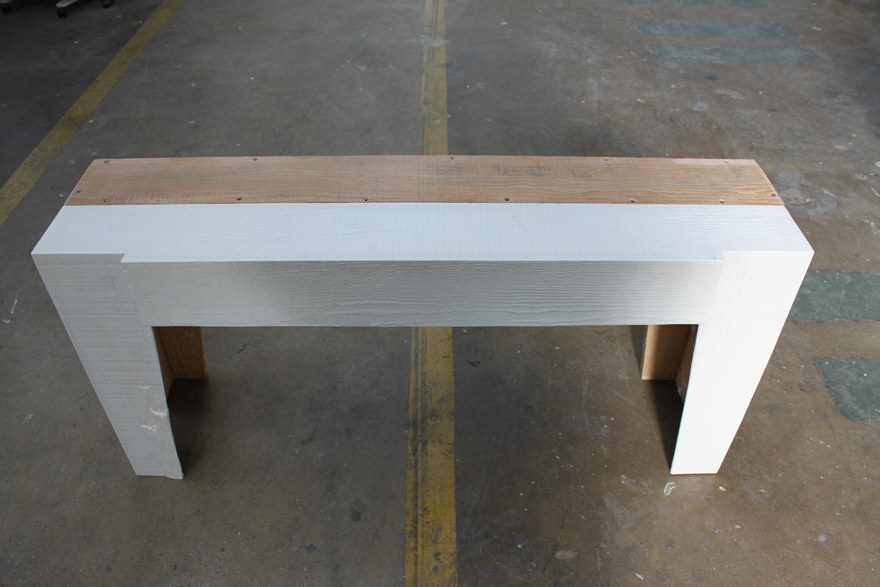 Describe your workspace: You know when you see photographs after a burglary, and they've just basically emptied everything onto the floor? That's what my studio looks like—and my house, which is quite horrible, to have no escape from all this.

Other than the computer, what is your most important tool? Probably my drill. I just use my drill for everything. And I'm really not romantic about hand tools—I'm very "easy come, easy go." When people ask advice on buying drills, I tell them, well, you shouldn't spend too much money because usually they get stolen. It's better not to get heartbroken and just get OK tools.

What is the best part of your job? The amazing amount of flexibility. I've got a little boy, and if we need to reshuffle who's looking after him or if someone needs a hand at home, just having that level of flexibility is really, really nice. I have a lot of friends who have to book their holidays way in advance, and we just kind of make things up as we go along, which I really like.

What is the worst part of your job? Existentialist questions, maybe? It's really kind of crappy weather today, and there's nobody else here at the studio. It's a very weird day; nobody came in. I've got a ton of stuff to do, and I just can't. I'm sort of battling with myself, trying to keep up motivation. So I think those demonic voices—I find that the hardest bit. You can just put "demonic voices" if you like. 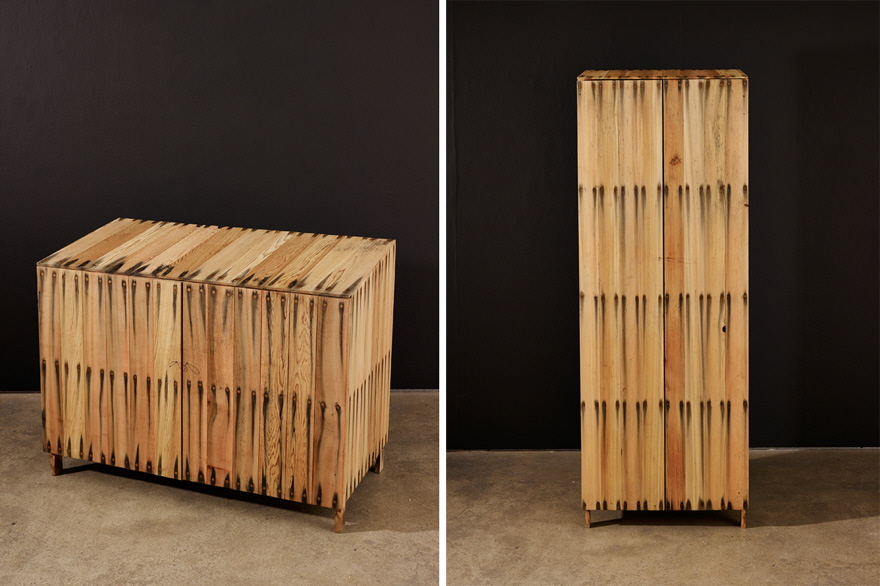 For the Bleed series, Marigold stripped the protective zinc coating from steel hardware, then combined it with cedar to produce bleeding patterns in the wood. 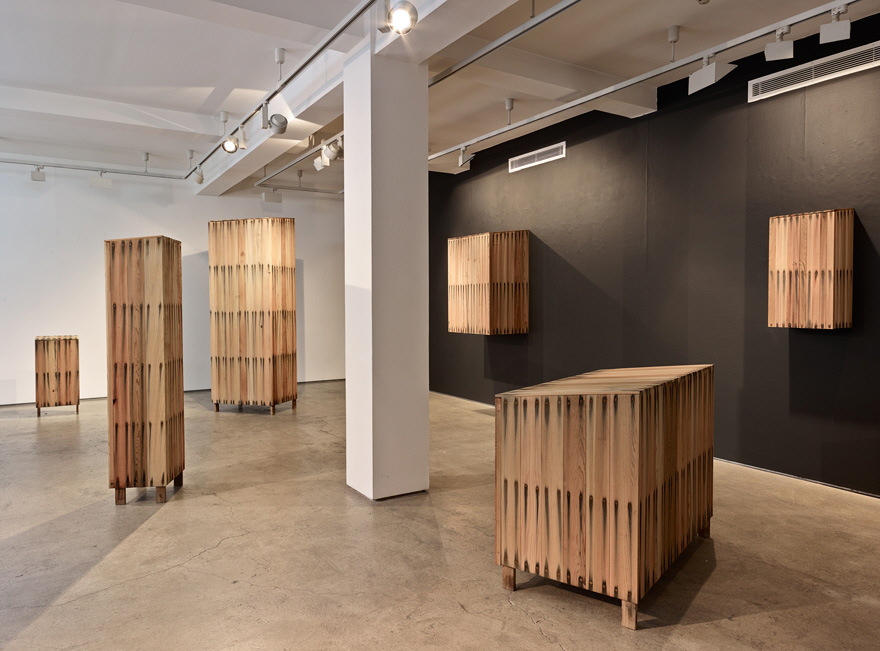 What time do you get up and go to bed? I get up at 6:30 a.m.—I try to get up before my little boy gets up. And I have been, annoyingly, falling asleep at around 10:30 p.m. consistently for the last couple of years.

How do you procrastinate? With great enthusiasm. I used to have a very bad eating disorder that involved porridge—I would eat huge, huge amounts of it, and that was a way of kind of avoiding reality. I try not to keep it in the house now, but from time to time I do have a bit. That's the most physical manifestation of it. Apart from that, it's probably endlessly trawling through woodworking websites, looking for interesting techniques and jigs. That's a terrible, terrible habit.

What is your favorite productivity tip or trick? Close your computer. I think the world is grinding to a halt because of computers. I meet a lot of young people in workshops and colleges and things, and there's a weird kind of passivity going through them. I was teaching for a while in a college, and I could see that when students start researching projects, they often end up endlessly trawling through websites to see what other things have been done, and that creates a very fearful attitude of not wanting to put your foot in the water, because you've seen all these incredible things that have been created already. The people I know who are very productive tend to just get out there and start making things. Blind ignorance goes a long way, I think.

What is the most important quality in a designer? Well, I wouldn't recommend me as an example of a good designer, so I'd have to look to other people. And I would say they're probably quite methodical and good with computers and imaginative and good at talking in trade fairs.

What is the most widespread misunderstanding about design or designers? It's difficult to have an idea of that from inside this world. I think most people think that design is basically interior design, and I think the general population doesn't appreciate how much of the world has gone through design teams and design companies—like all of these objects just popped into existence. 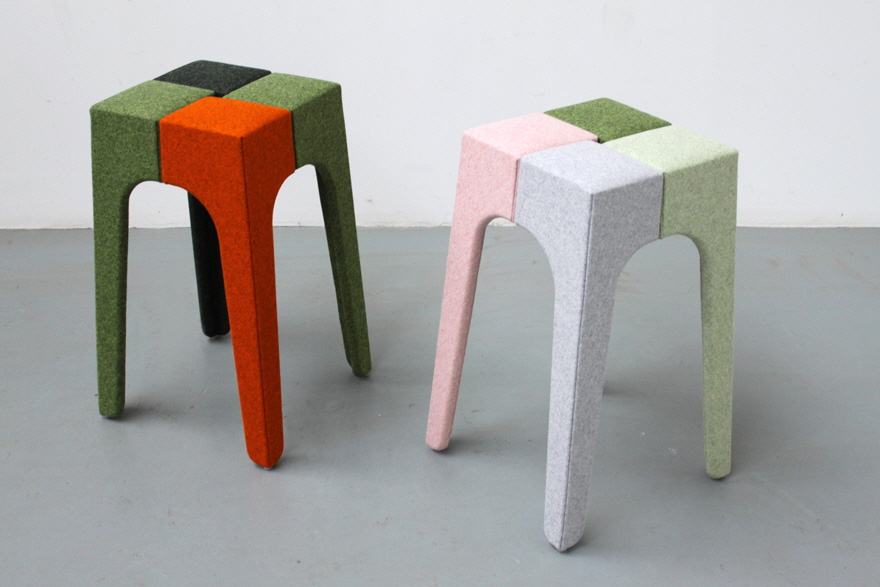 Jib stools for the 2014 Milan Salone 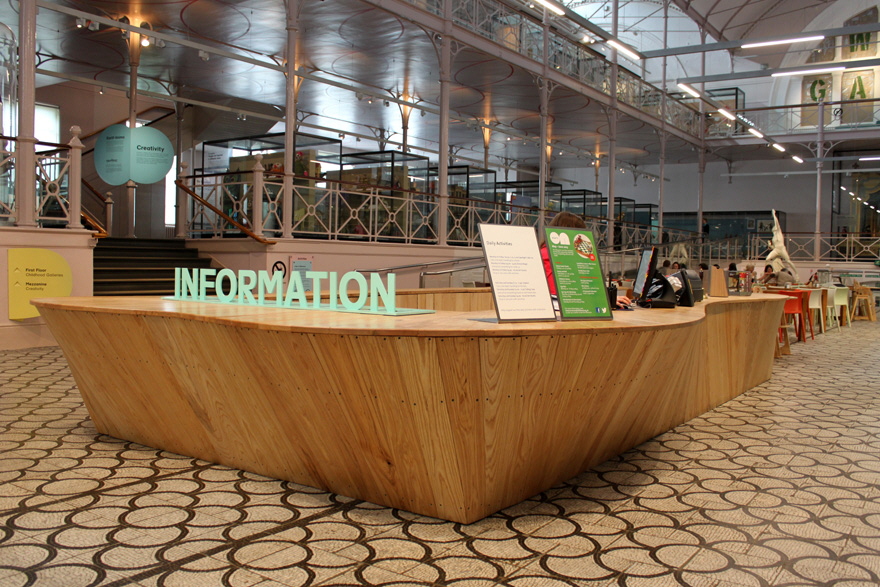 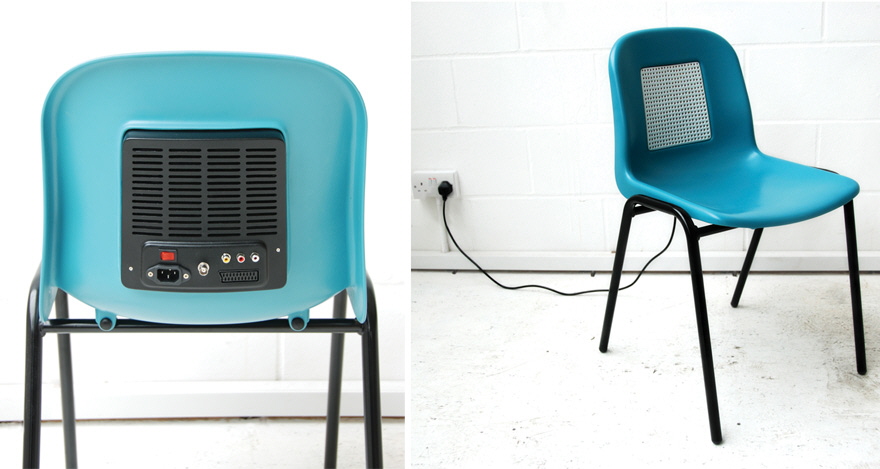 What is your most prized design possession? My house is such a dump that I generally don't keep things of great value there. But I just bought a beautiful door handle for my son, because he couldn't open the door in the morning; he'd get locked in. So for ten pounds I got this amazing brass door handle from 1910, which was made in Leicester Square, in the center of London—there used to be a brass manufacturer there. I've got a lot of things like that.

What is exciting you in design right now? I must admit that I don't look at a lot of design. Occasionally I'll look at design blogs and just scroll through, but it's very surface driven. The last thing I got really excited about was the guy who did the Solar Sinter project. He made a 3D printing machine in the desert that fuses sand in layers into glass; he was making a series of vases from this glass. That was pretty phenomenal.

If you could redesign anything, what would you choose? The English sash window. Everybody loves and hates sash windows. People hate them because they're always broken, and there's a reason why they're always broken, which is this one small wooden detail. If it was done in a different way, everyone would be able to renovate them. For years I've thought about starting a campaign to cut this piece of wood in a different way and renovate all the windows in London.

What do you hope to be doing in ten years? I really don't have any long-term plans. I'm starting a Kickstarter campaign soon, for the first time, and that might be the start of an idea of a series of products that are more like small-production pieces, and not so much studio/gallery pieces. So in ten years maybe I'll have taken a step back to manage the production of objects. But I don't know.

Lastly, who's more fun to have a drink with: architects, industrial designers or graphic designers? Well, each of those has got certain pitfalls. Graphic designers can end up talking about Star Wars. Industrial designers can be really, really nerdy. And architects can have that existentialist despair at never working on real projects, or never working on their own projects. But I think architects generally have the most interesting life stories, so I'll choose them.