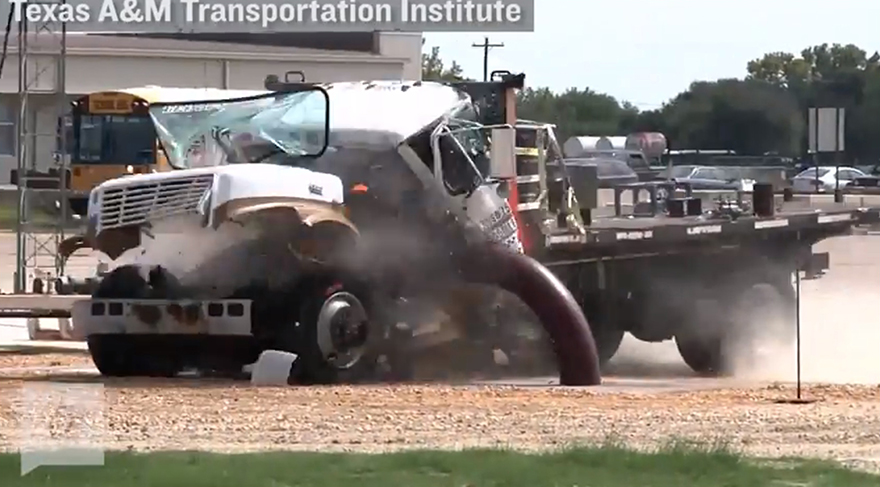 Down by the Centre Street courthouses in lower Manhattan, where I walk my dogs in the morning, I saw them re-installing one of those anti-terrorist pylons. All government buildings downtown became ringed with them after September 11, 2001. I was impressed to see that the pylon is at least twice as long as you'd think it is, as its metal core is inserted deep into the ground, presumably into some type of concrete mounting block. This is reassuring, as I'd often wondered if those little four-foot-tall cylinders could really stop a dump truck loaded up with explosives.

Hopefully we'll never have to find out—but the U.S. State Department isn't taking any chances. Since 2001 they've been working with Texas A&M's Transportation Institute, and the latter organization's Crashworthy Structures Program is responsible for designing barriers, including the kind that ring government buildlings. They've recently tested a U-shaped steel kind designed to stop a truck dead in its tracks, even with a 50 m.p.h. headway. Take a look at this:

Insane, no? And impressively, according to The Texas Tribune, the 24-foot-wide barrier is only buried 18 inches deep. (The concrete pylons I saw being re-installed appeared to go a lot deeper than that.)

The Crashworthy Structures Program, by the way, designs at least two variants of barrier. Some are "highway safety appurtenances" while others are "perimeter security devices" like the one in the video. And obviously the design considerations with the latter are quite different. "The focus [with perimeter security devices] is on keeping a terrorist from breaching the barrier," TTI's Dean Alberson told the Tribune.

"The ability of a driver to survive such a crash," the article concludes, "is not a primary concern."