If you've ever assembled a piece of IKEA furniture, you've undoubtedly seen the two items up above, and you understand how they fit together: 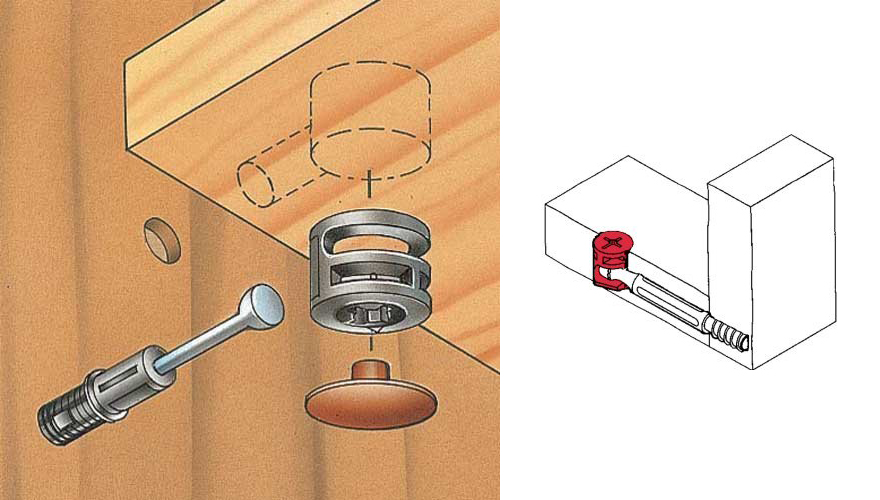 For the average consumer that doesn't know what they're called, they're named cam lock nuts and cam screws. You'll hear them referred to colloquially as "knock-down fasteners" (and occasionally "Confirmat fasteners," which I believe is incorrect; if enough of you are interested in why, let me know in the comments and I'll pull another entry together). They've been a mainstay of IKEA's flatpack product line for as long as I can remember, although from a design perspective, it seems clear that their benefits are outweighed by their drawbacks.

The meager benefits of cam lock nuts and screws is that they can be driven with a Philips screwdriver, which most consumers have rattling around in a drawer somewhere, and they provide a relatively quick connection method that's low on labor. And on the manufacturing side, they can be used with butt joints, which is by far the simplest and least expensive thing to cut on a production line.

The drawbacks are far greater. The key flaw is that they're designed to be used with particle board, which does not take fasteners well. Because of this it's easy to drive the screw in at a slight angle. The screw is then forced straight when the end user inserts it into the cam lock nut, and this further weakens the point of connection between the screw threads and the mushy particle board fibers. The resultant connection will not withstand shearing forces well, and multiple cam lock nuts and screws are needed along a single edge to form even a barely tolerable connection. Lastly, cam lock nuts are unattractive, and IKEA designers of course take pains to put them on the insides or undersides of surfaces.

IKEA's global influence alone is enough reason for independent manufacturers to keep producing these inferior pieces of hardware. (You can find them everywhere from Amazon to eBay to Home Depot from a variety of manufacturers.) Thankfully though, the designers at IKEA's HQ have been working on a new connection method with several advantages over cam lock nuts. Check it out.