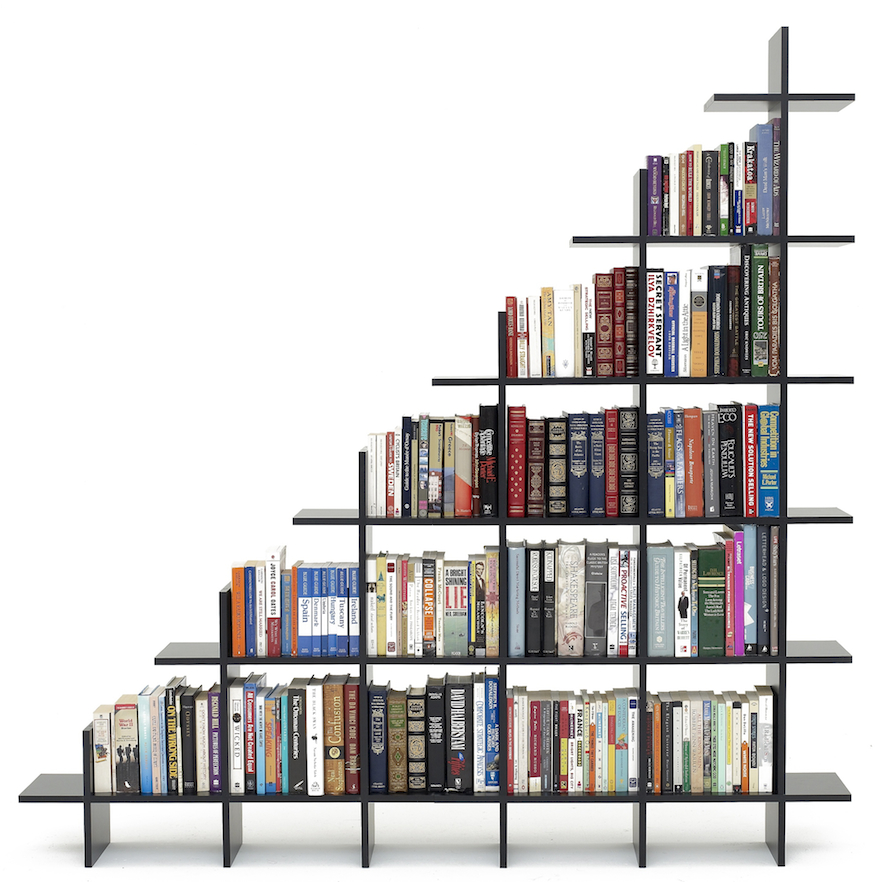 While some people are dismissive of those who have problems assembling IKEA furniture, I know plenty of otherwise competent and intelligent end users who struggle with it. Having helped both friends and clients assemble this stuff, amid many curses, I'm delighted that IKEA is coming out with a new line using tool-free connectors. But IKEA is far from alone; many designers have been creating furniture that assembles tool-free, using a variety of mechanisms. And much of that furniture is shelving and other items that help with getting organized.

Smart Furniture has a product line called Smart Shelves, where the interlocking shelving components slide together using pre-cut slots; the units then connect vertically or horizontally with dowels. The system is designed to allow for easy reconfiguration and expansion. When I watched the assembly video, I was pleased to see that a single person could easily put this product together without needing a helper. The components all have a lifetime warranty. 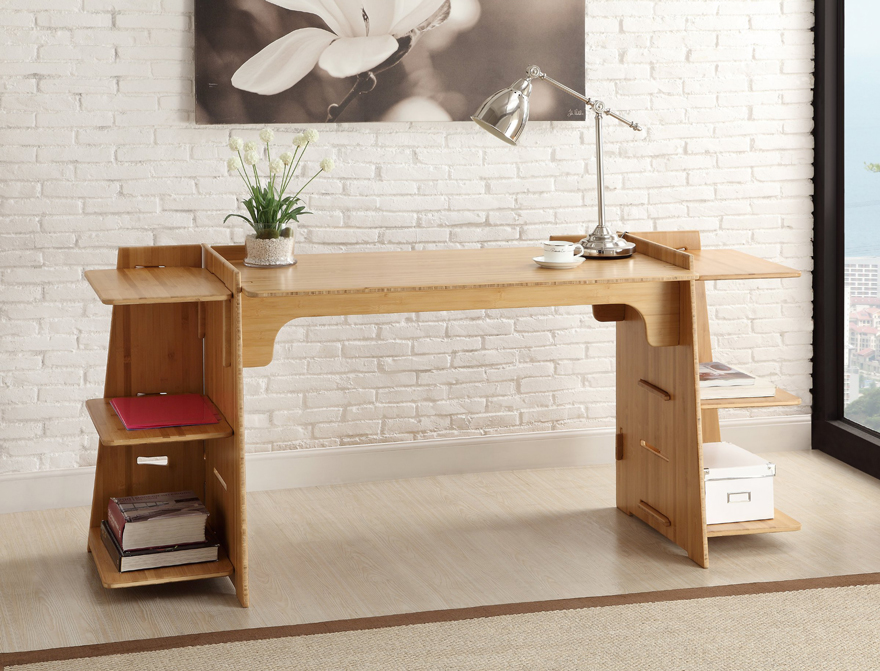 Legaré has been making desks with no-tool assembly for over 14 years; it now makes shelving units, too. This desk, with its built-in shelving, assembles in two minutes with no tools. 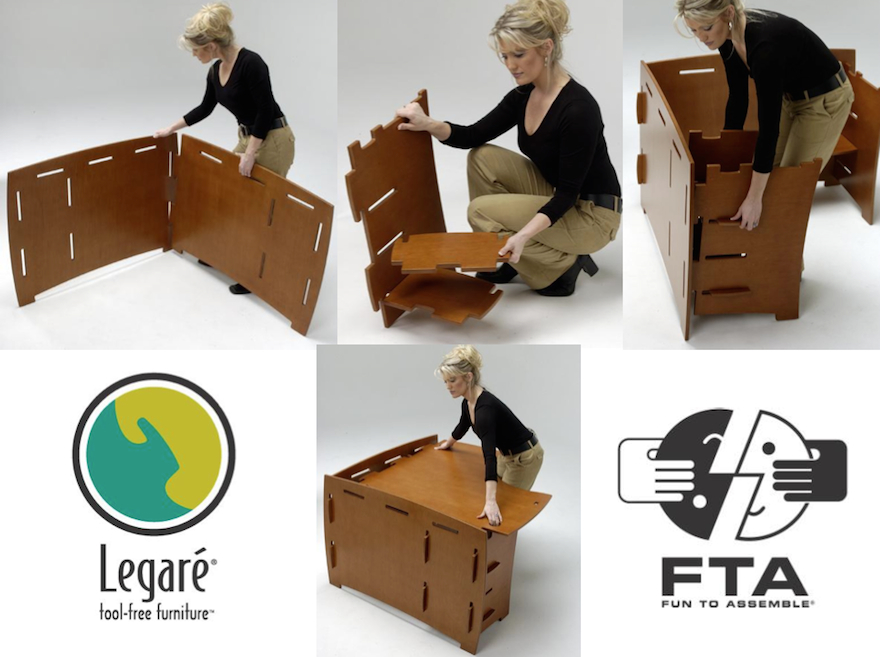 This is a different Legaré desk, but you can see how it goes together using its patented locking tab/slot system. Legaré notes that they can be assembled and disassembled repeatedly without damage. Another nice feature: There are no small pieces to get misplaced. The desks are made from bamboo plywood sourced from FSC-certified mills. 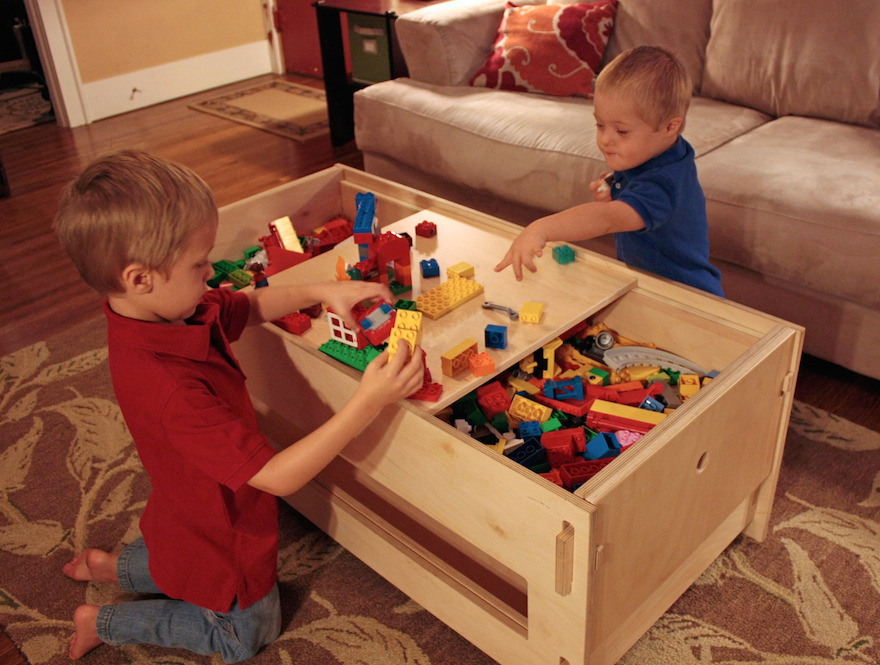 Klevr Furniture makes a number of interesting products including shelves, a storage-top desk and a Lego storage table for kids. 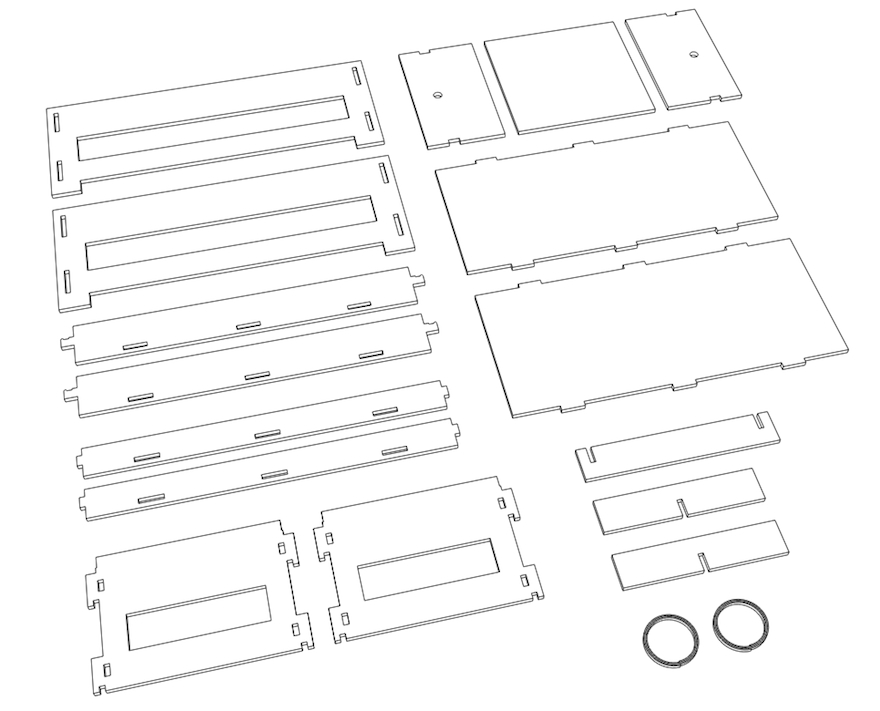 Like Legaré, Klevr Furniture has its own patented tab and slot assembly; the picture above shows the box contents for the Lego storage table. Klevr says: "After you've assembled an item once, you can probably time your next assembly in seconds. It literally takes longer to unbox the parts and sort them out than it does to assemble the panels once you're familiar with an item."

The Movisi Play Shelving, designed by Antoine Phelouzat, has an interlocking system "reminiscent of jigsaw puzzles." The pieces are pressed into each other, which requires some force. 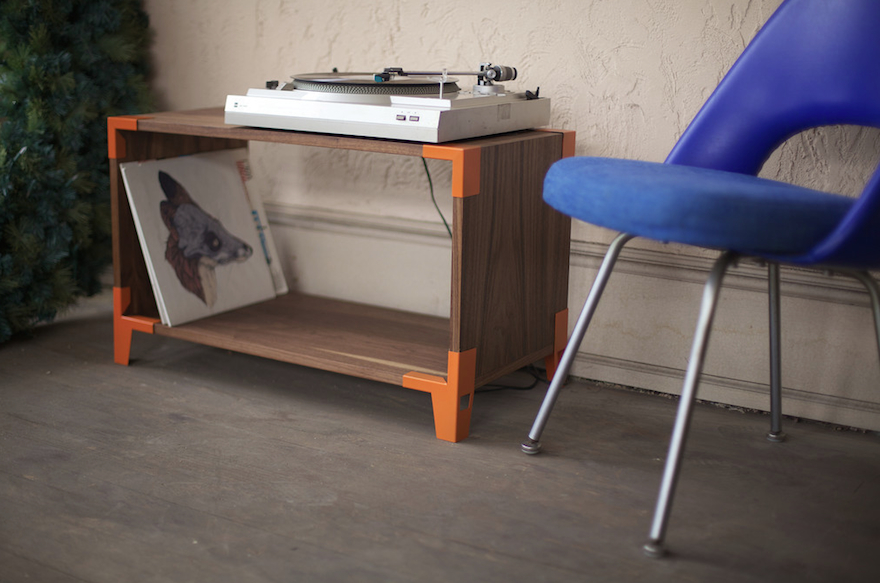 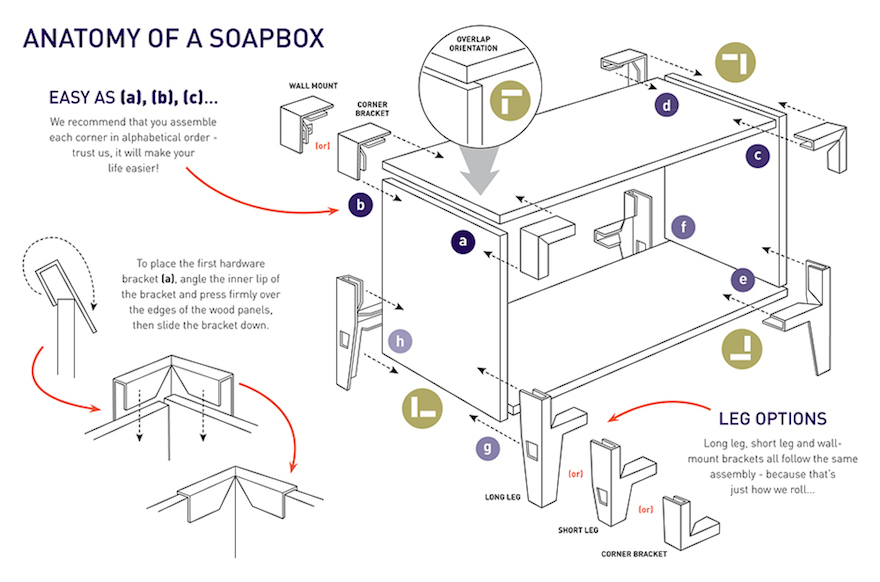 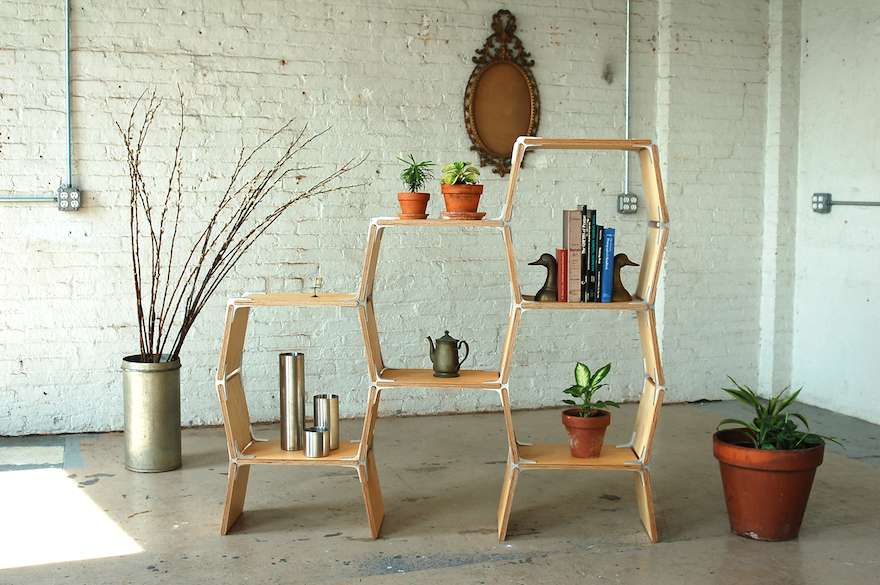 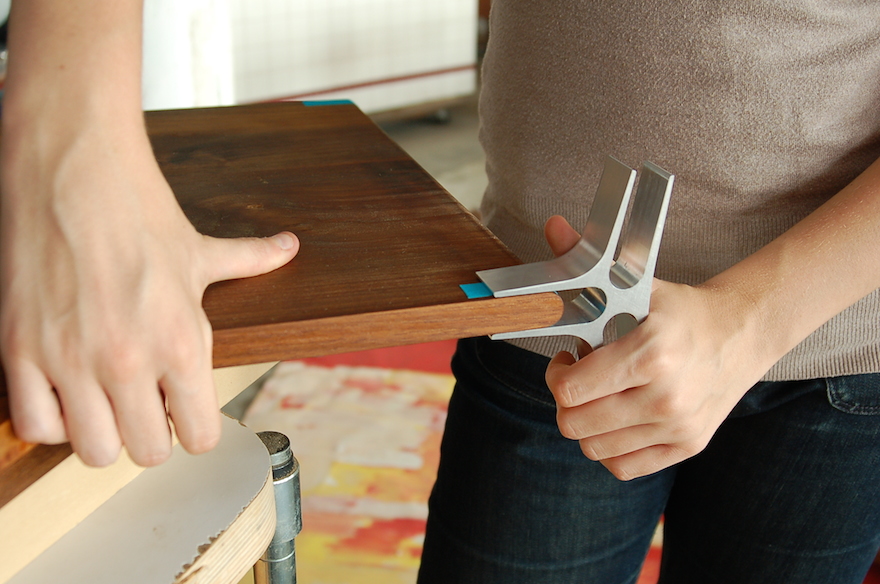 Modos uses anodized aluminum connectors for its furniture system, which is easily reconfigurable. As a storage system, though, the non-rectangular shape of the compartments, as well as their size, makes Modos less usable than some other designs. 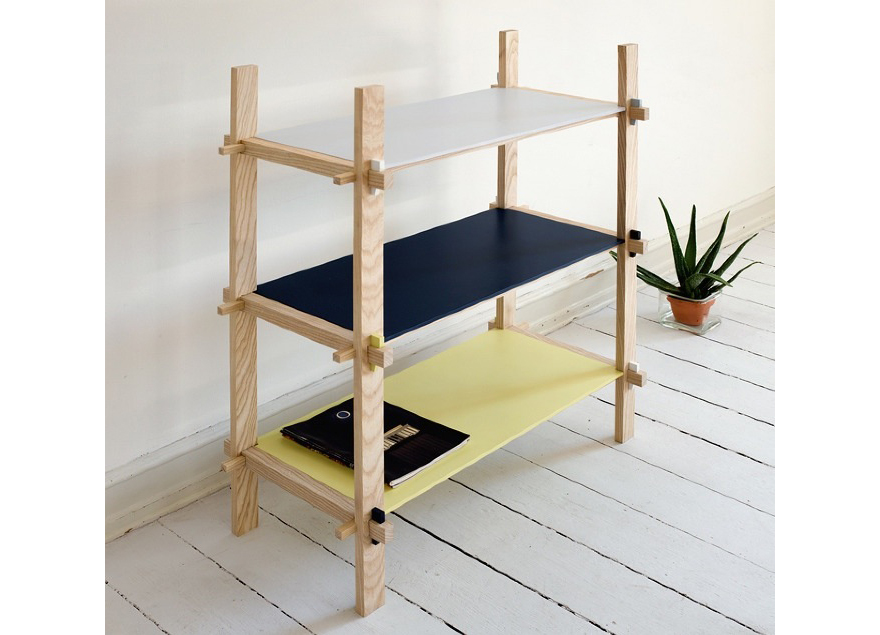 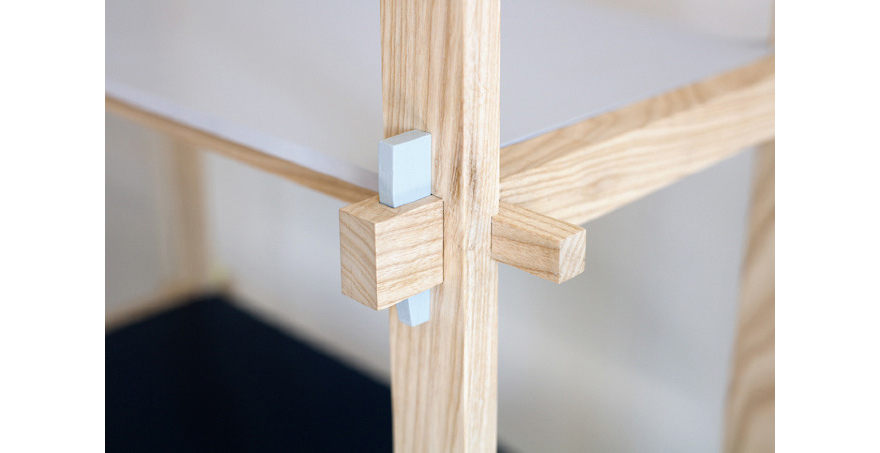 Kile, from designer Yakari Hota, is assembled by using wedges.

Yübe is a cube-based modular storage system that uses pressed sugarcane fiber for its outer panels; the interior frames are made from bamboo and recycled plastic. It's not clear what the corner frame locks are made from.

The company says it uses an "intuitive snap and stack design"—but as with many such products, there's a learning curve. One reviewer said, "Building the first Yube took a while, but after that it went very quickly." The company also offers an assembly service in some areas, which might indicate it's not quite as easy to assemble as end-users would like it to be. Alternatively, this might just be a really nice offering for those who don't want to do any assembly work themselves, no matter how easy it is.

The Ofon system from Nendo is a bit different, in that it's not entirely a flat-pack solution. But the basic components—one of which is a cube—are combined using a "coin joint" that can be "screwed and unscrewed with a single coin, rather than requiring tools."