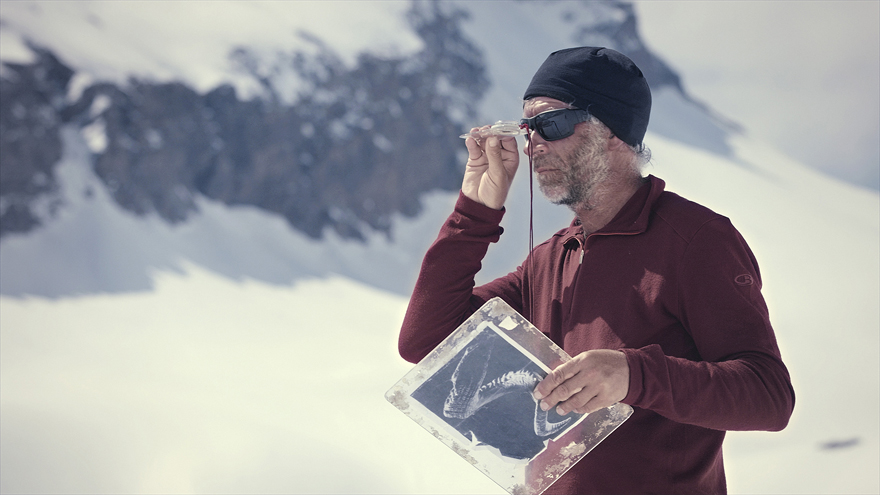 Created some two generations ago, in the heady pre-hyperlapse days, the Eames' Powers of Ten remains as relevant today as ever before. While the short film makes for an unlikely (or at least hyperbolic) comparison to the work of snow artist Simon Beck, the very concept of scale is precisely why both the film and the large-scale drawings are compelling and accessible to a broad audience.

Having previously seen Beck's work when it made rounds last year, I was interested to have the opportunity to interview him on the occasion of the launch of Icebreaker's inaugural artist collaboration, for which a portion of the proceeds will be donated to Protect Our Winters (a non-profit organization for climate change awareness). Commissioned by the apparel company, Beck's interpretation of a ram's horn—a reference to merino wool—features prominently among the geometric artwork that has been printed on the pieces in the new collection.

Over the past decade, Beck has all but perfected his technique of 'drawing' on snow and has recently expanded his enterprise to include works on sand as well; he employs snowshoes to achieve a kind of stippling effect on the former surface and a rake to etch lines in the latter. His only other tools are an orienteering compass and a string-and-anchor to demarcate the 'skeleton' of the piece relative to the center point or vertices. As for the content itself—canonical fractals and patterns of his own design, but sometimes cartoons by request—Beck goes by a thumbnail sketch and gut instinct, rarely drawing out the entire piece beforehand, because (as he dryly notes) "it's too time consuming." 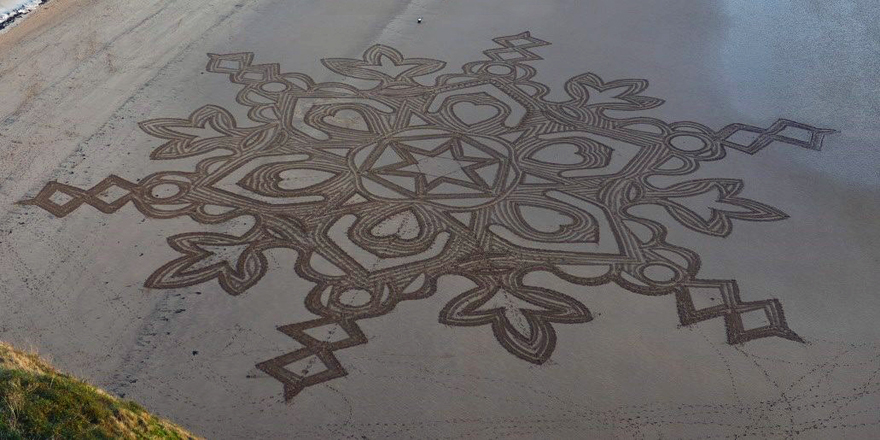 As labor-intensive as it is, the work is temporary by its very nature, and Beck, 55, has learned to thoroughly document his work. Humble though his analog approach may be, he's no luddite: He boasts of his DSLR and expresses an interest in purchasing a drone for aerial photography. In the tradition of performance art and site-specific artwork, these images allow for (potentially viral) distribution of pieces that last for a few days or weeks at best. Although his works on ski slopes and beaches may attract a captive audience, his regular haunts in the Alps, where he spends his winters, tend to be less accessible; the only witnesses tend to chance upon the sites during snowshoeing excursions. Passersby are generally benign—Beck sometimes enlists them to fill in extant lines—but he relates that a stubborn guide once intentionally led a group of snowshoers in a beeline across a work-in-progress.

But interlopers are only a minor variable in Beck's practice: Insofar as the drawings are expressly meant to be destroyed—whitewashed by fresh powder or erased by the tide—his oeuvre captures both a vaguely Buddhist sense of transience and renewal and its Sisyphean obverse. Whereas our agency in climate change is largely abstracted from our day-to-day activity (viz. energy consumption), the artist willfully subjects himself to the vicissitudes of the environment. Nature dictates the constraints: Avalanche-induced ripples, uneven thawing and topographic irregularities are typical aberrations in an otherwise pristine canvas; in order to photograph the drawings on snow, Beck needs clear conditions on the day following the day that he spends drawing. 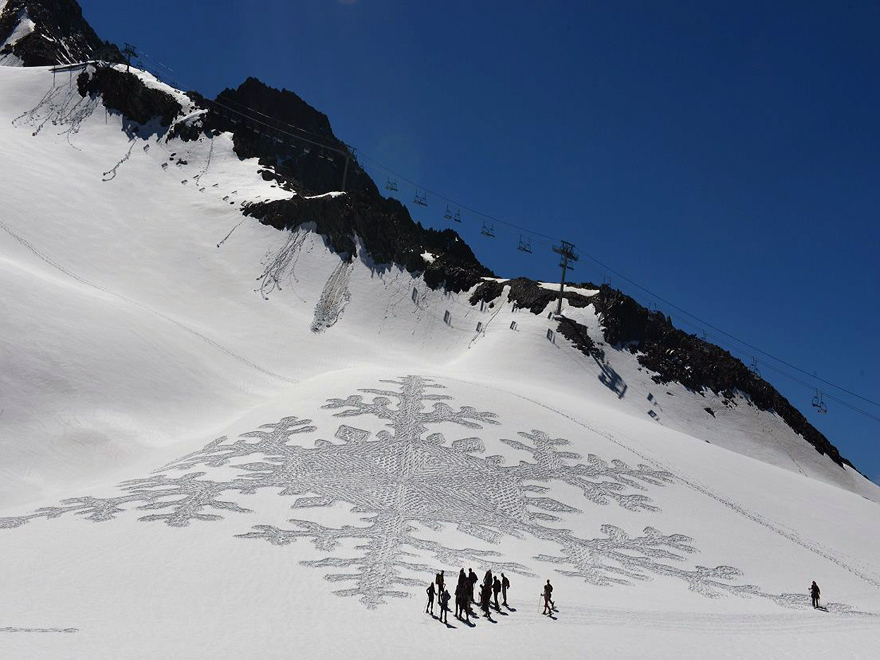 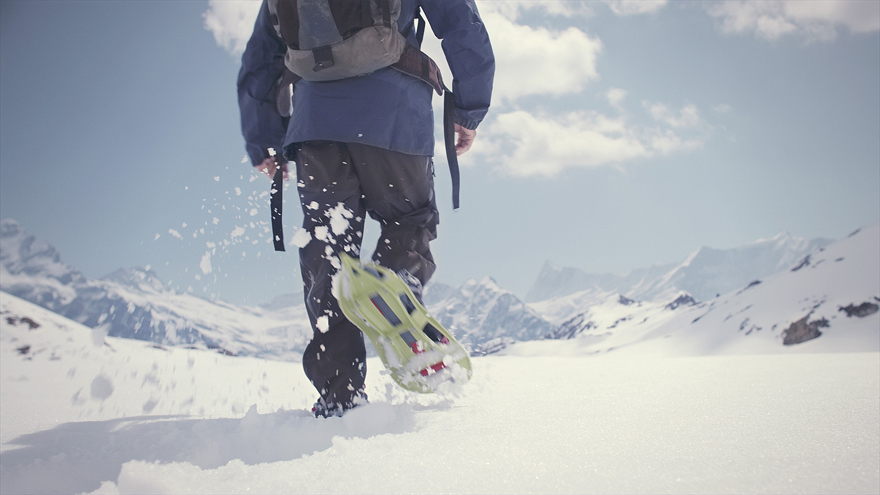 Of course, Beck takes it all in stride. Although he prefers not to repeat patterns that he has drawn in the past, he notes that any given piece can take a couple tries to execute and document properly. More a pragmatist than a perfectionist, Beck is also quick to point out instances where he's redrawn a pattern atop the faint outlines of a previous work. (As one might expect for someone who has made his name traipsing across frozen lakes for upwards of ten hours at a clip, Beck is also idiosyncratic to a fault: Once he has established the all-important skeleton of a piece—the step that requires the most concentration—he starts filling in the rest to a soundtrack of self-recorded MIDI versions of classical music.)

Meanwhile, the granularity of both snow and sand makes for an interesting commentary on scale: These 'pixels' are too small to discern by eye, but Beck manipulates them by traversing a landscape, such that a single drawing can cover the area of "three football pitches." (To extend the analogy, the lines are 'aliased'—not due to compression, as in JPGs, but rather because of the anthropomorphic scale of his tools.) The subtext, of course, is that he is literally leaving footprints on the environment in order to transpose the scale of of our impact—one could also choose to read into the fact that snowshoes magnify the size of his footfalls—albeit on surfaces that effectively regenerate over time. 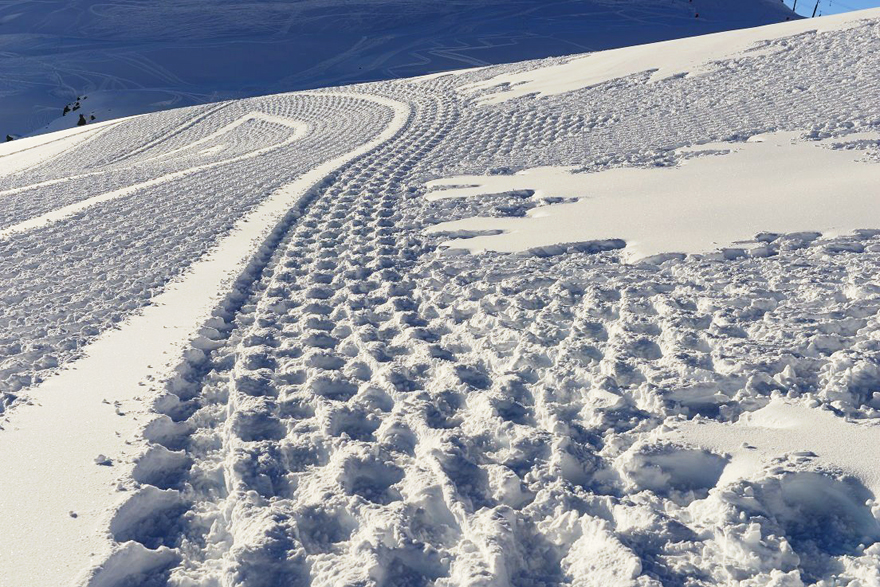 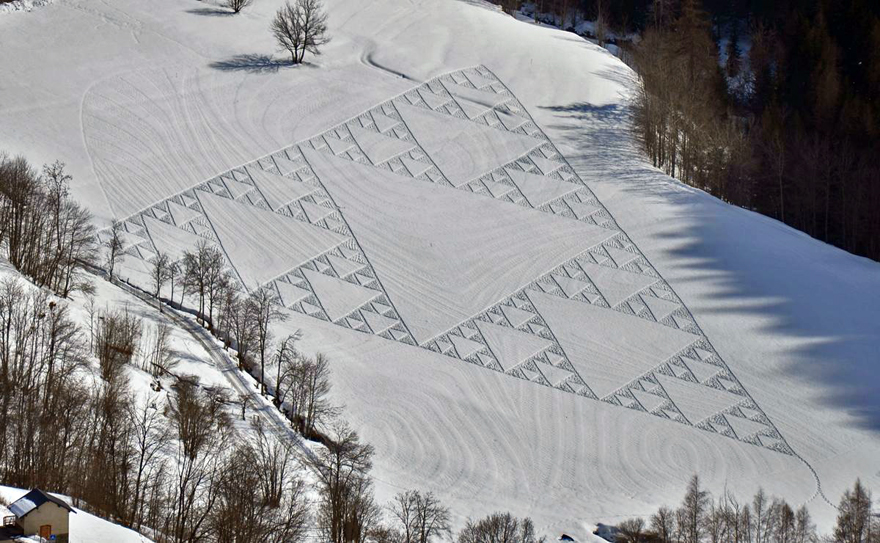 Even so, Beck is imposing order, qua geometry, on the tabula rasa afforded by nature. He speaks passionately about designing patterns and systems as approximations of the natural world—yes, snowflakes are a favorite motif—and expresses admiration for the simple elegance of the Sierpinski Triangle. Yet he remains decidedly unsentimental about his work, citing an instance in which each side of the triangle was supposed to be 128 paces long but where the misplacement of an anchor resulted in a 125-pace edge and some messy fractions (you do the math) when it came to subsequent measurements. As in freehand drafting, the fallibility of the artist imparts an element of humanity in favor of the crisp, robotically infinitesimal precision of vectors.

Indeed, Beck has arrived at his art form through his abiding interest in geometric order and the great outdoors. A cartographer by training and trade, Beck ultimately found his creative calling through his interest in orienteering, and he embraces his status as an outsider artist, acknowledging that he'd only heard of Robert Smithson's "Spiral Jetty" when another journalist mentioned it. Speaking of a recent visit to MoMA, Beck dismissed a series of all-white paintings (presumably Rymans or Martins), going so far as to half-jokingly remark that the museum would be better off exhibiting his work.

It's a telling example: For Beck, it doesn't make sense to approximate a blank canvas; the point is not to abstract away from reality into nothingness but to alter our perception—specifically, our appreciation—of the world around us. Beck's snow art is a timely subversion of McLuhan's modernist dictum (which dates back to the same era as Powers of Ten, no less) that the medium is the message. If Buddhist mandalas are the obvious reference point for his ephemeral drawings, it's also worth noting the all-important differences—Beck's drawings are overwritten by the external forces of nature, while the size and shape of his canvases is subject to climate change.