In the Details: Turning Standard Copper Tubing Into a Gaudi-esque Console Table (with a Little Help From the Brooklyn Bridge) 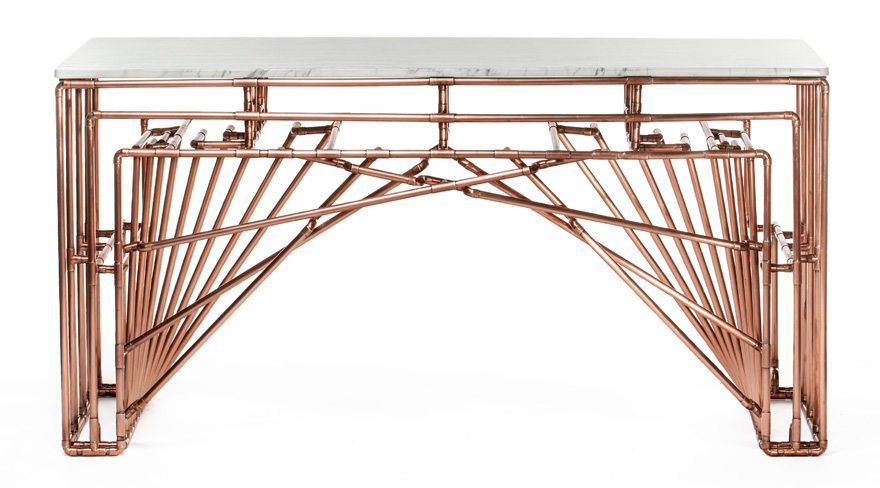 I first stumbled upon TJ Volonis's work while attending the Fiercely Made design show last month in Brooklyn. Standing at 30 inches tall and 60 inches long, the Brooklyn-Barcelona Console Table was the centerpiece of the show, inviting attendees to admire its complex geometries—inspired by the bridges and arches of its namesake cities—and its simple use of materials. Just as the show highlighted the work of Brooklyn makers, Volonis's table is a product of his surroundings. For the artist, the city provides the inspiration and backdrop for his work, as well as the pathway to discovering the medium of copper tubing in the first place.

Volonis began working with copper tubing back in 2005, when a dumpster-diving roommate brought home an awful IKEA coffee table. "It was in pretty bad shape," Volonis says. "The legs were quite wobbly, as the supports between them had broken off.". Always curious about copper tubing, Volonis picked some up at his local Lowe's and taught himself how to manipulate and solder it to build new legs for the discarded table.

His next foray into copper tubing was for a chair he made for a benefit art auction. Entering anonymously, Volonis ended up taking home the Best Emerging Artist Award for mixed media, garnering the attention of a gallerist who asked to see the rest of his portfolio. As the chair was only the second piece he had made at the time (and the IKEA table left a bit to be desired), Volonis did as all good creative folks do—said yes and ran home to figure it out. He quickly made another four or five pieces to show the gallerist, and while the opportunity never quite panned out, Volonis began to look more seriously at his work. 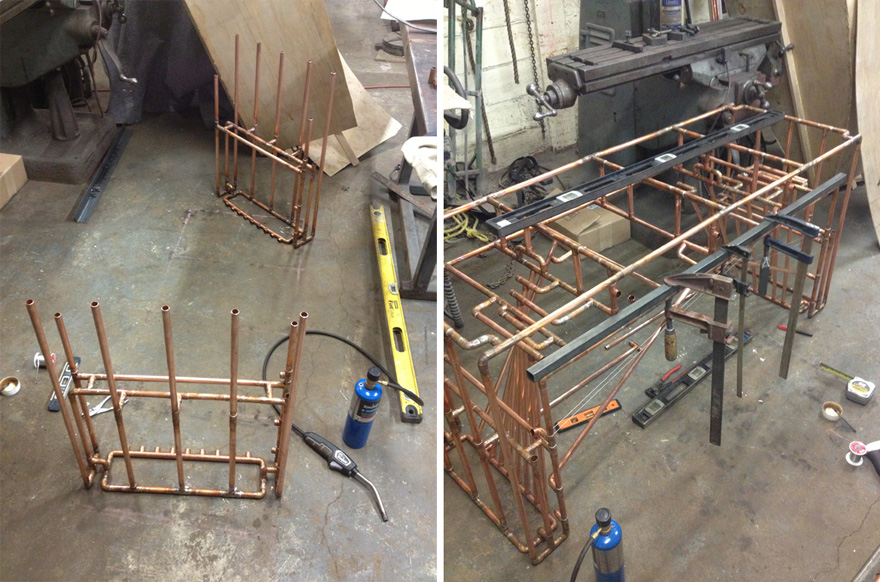 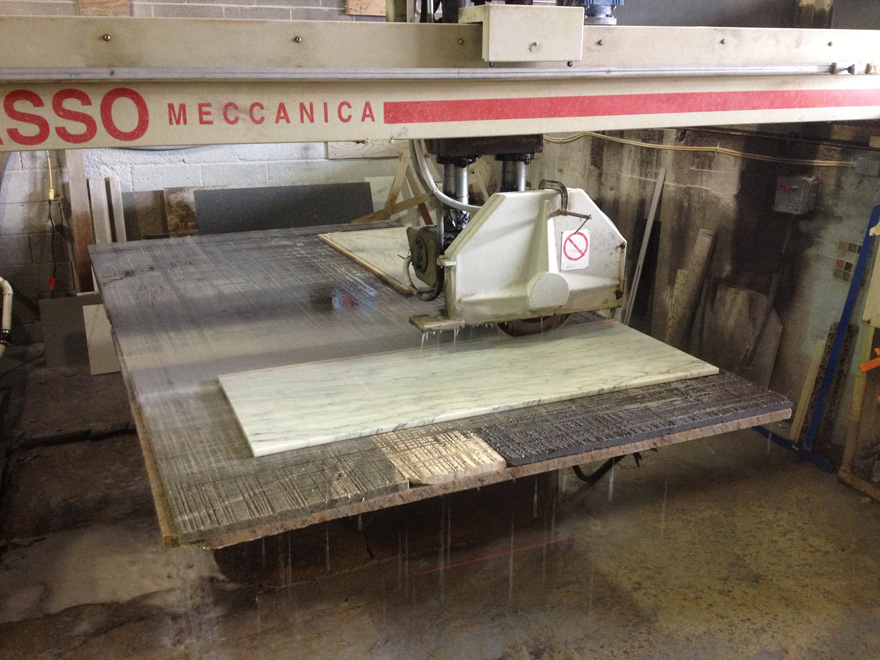 Ever since moving to Brooklyn in 2000, Volonis had been fascinated by the interlocking and overlaying visuals of the Brooklyn Bridge suspension cables and the resulting web of intersecting lines. "Moving through that three-dimensional space is mesmerizing and a real treat, visually speaking," he says. Coupling that with an appreciation for Gaudí's parabolic arches in Barcelona, the artist came up with the idea of creating a table inspired by these elements of infrastructure and architecture, building the Brooklyn-Barcelona Console Table over the course of two months in early 2012.

Purchasing more copper tubing from Lowe's and ordering fittings, solder, flux and the rest online, Volonis was careful to use the same materials and processes that plumbers do. As an artist, Volonis wants to "explore the presence of the industrial in our everyday, something that is very visible living in New York City and the New England area, the epicenter of the Industrial Revolution in the United States." For Volonis, that means taking something that was made for a specific functional purpose and translating it into something beautiful and unexpected—like the copper tubing in the Brooklyn-Barcelona Console Table.

Starting with the base of the legs, Volonis created the table the same way he approaches most of his work, in stages from the ground up. The artist placed each rod, piece by piece, soldering them into place. The rod placement was based on geometries and mathematics found in the Brooklyn Bridge and Gaudí's architecture, then researched online and incorporated into the piece. Volonis looked at the positive space created by the bridge's cabling, which creates the parabolic arch through the negative space underneath it. 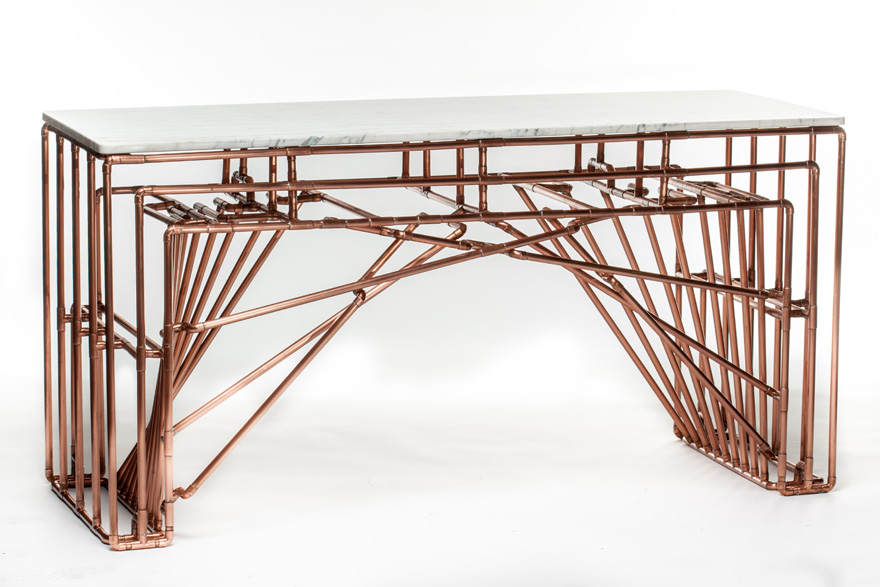 Using no jigs, Volonis often found himself needing to backtrack after forgetting to anchor certain pieces of the frame in a particular way. "There were plenty of slip-ups and recoveries," he says. The top of the table proved particularly challenging, as the marble surface had to sit perfectly on top of the copper tubing, otherwise it might break depending on the severity of the curve from one end to the other.

"There is always a push and pull with reality," Volonis says. "I find that what I want to do isn't quite physically possible and I have to come up with work-arounds to achieve the look I'm after." He adds: "I really consider the material a collaborator and co-conspirator in making my work. Once you understand the limitations, you can push the material further than the layman would think possible."

The Brooklyn-Barcelona Console Table retails for $14,500, and can be found with some of his other pieces over on Fiercely Made, an online collective of Brooklyn-based makers.

In the Details: Turning Standard Copper Tubing Into a Gaudi-esque Console Table (with a Little Help From the Brooklyn Bridge)