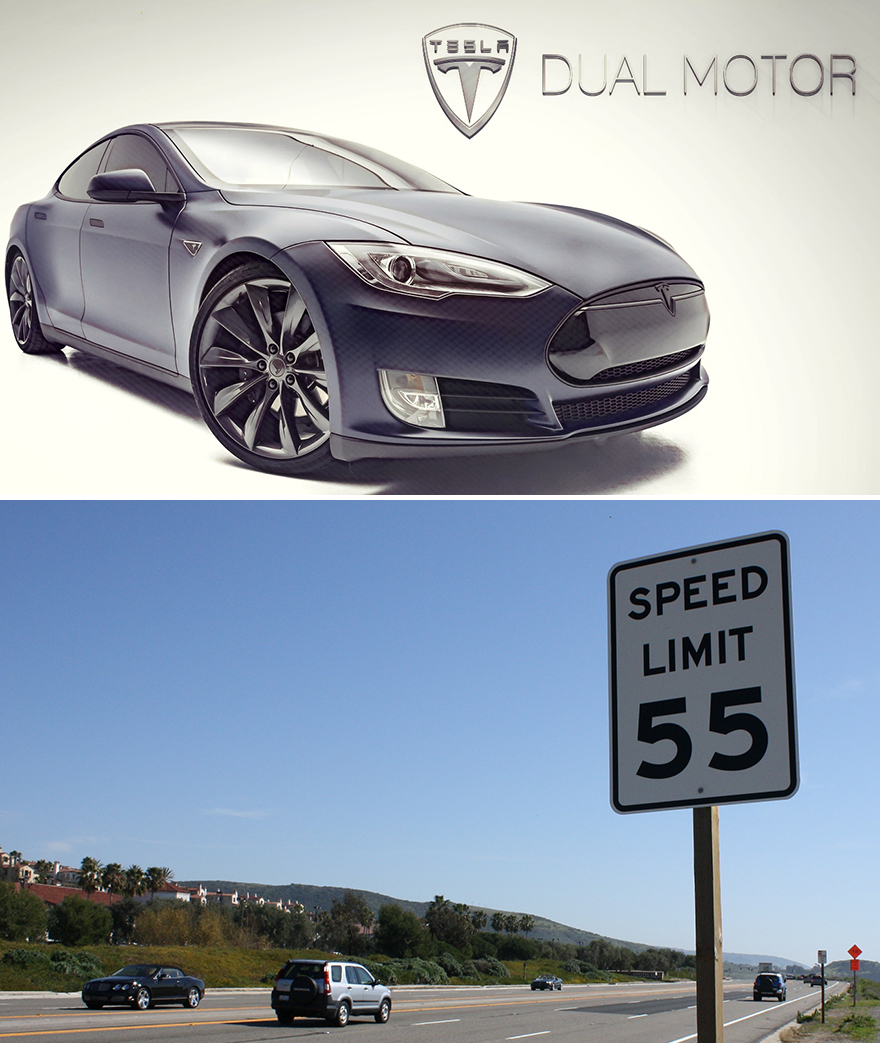 Yesterday Tesla Motors held a press event where they announced their new all-wheel-drive models, which hit the road in December. These being electric cars, rather than using a single motor to drive all four wheels, Tesla is simply dropping a second motor into the car; with one up front and one in back, there's no need for a driveshaft in between and all of those pesky linkages.

And these cars will go from 0-60 in an absurd 3.2 seconds, in case you need to smoke a Bugatti. "This car is nuts," Tesla skipper Elon Musk told the audience. "It's like taking off from a carrier deck." (See video below for the full carrier deck/Battlestar Galactica-esque "launch sequence.")

Some optimists assumed that at last night's event, Musk was going to pull the sheets off of a completely self-driving car. While that's undoubtedly a ways off, the autopilot features announced last night for the new models indicate it's not as far off in the future as you might think. Using a combination of radar, a camera and a dozen sensors, this is what Tesla's new models can reportedly do:

- The new system will move the car over a lane when the driver uses the turn signal.
- The car reads speed-limit signs and adjusts the car to the speed on the sign.
- Drivers will be able to get out of the car in their driveways and watch it park itself in the garage. When drivers are ready to leave, the car will able to drive itself up, with the car's temperature and stereo system set to the driver's preferences.

"It will come to you wherever you are," Musk says. "It will slowly make its way to you."

I'm not sure why you'd choose to get out of your car in the driveway rather than in the garage—most architects are thoughtful enough to put a door between the garage and the house—but then again, perhaps Musk is targeting the super-rich owners who live in manses apart from the stables. In any case, it was that speed limit thing that caught my eye. I can't speak for the rest of the country, but here in the Tri-State Area it's commonly accepted that highways have a ten m.p.h. grace range, meaning you can do 65 in a 55 and no cop will pull you over (unless maybe you're driving one of these). I wonder if Tesla's auto-nanny has got an override, or if you have to shut the whole system off, thus losing all of the other safety features, to cruise at a reasonable speed on the highway.

Check out SlashGear's video of a test drive from last night's event demonstrating the autopilot: