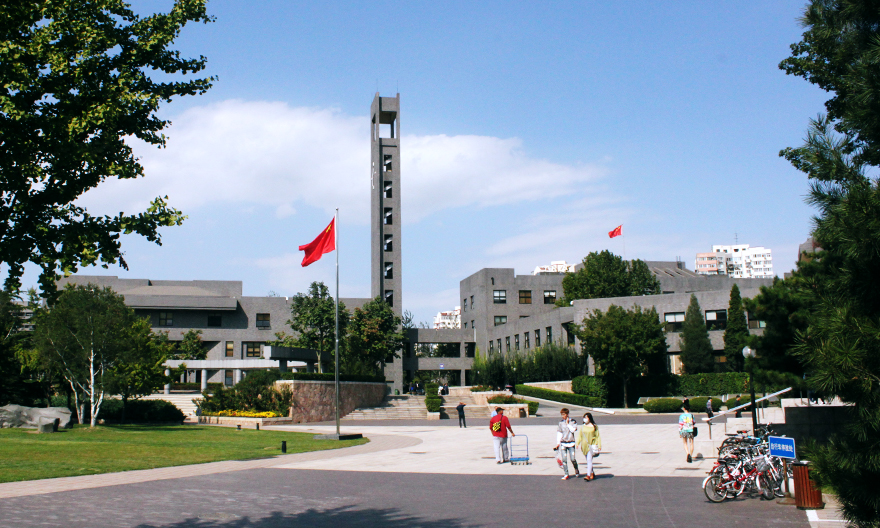 The Central China Academy of Fine Arts, or CAFA, is easily among the top art schools in China, both for its extremely competitive entrance requirements and its close ties with the government. Originally founded in 1950, the current self-contained campus, established c. 2007, is located in the Wangjing neighborhood in northeast Beijing. As the curator of the Beijing Design Week festivities in Caochangdi this year, faculty member Ben Hughes saw fit to encourage his students in the industrial design department to show their work (as well as inviting them to develop interactive booths for the so-called "Plug-In" Stations).

Exhibited in Naihan Li's new studio from September 27 – October 1, "Everyday Issues" followed from Hughes' brief to his graduating class to research and develop solutions for "everyday problems and basic improvements to everyday life."

Each piece [is] underpinned by thorough research in areas of user experience, technology, materials and processes. Areas dealt with by these projects vary hugely in their diversity but include issues such as Courier drivers' working conditions; using technology to introduce and educate different tea drinking practices; bringing handwriting to mobile communications in a novel way; helping people recycle kitchen waste and grow edible fungi at home; using xuan paper in three dimensional forms and much more.

In addition to images and descriptions of each project, Hughes shared several of short films that the students produced, as well as images from their final presentations. [Note: The work can also be viewed on CAFA's 2014 exhibition website; the number following the project name correspond to the link on this site.] 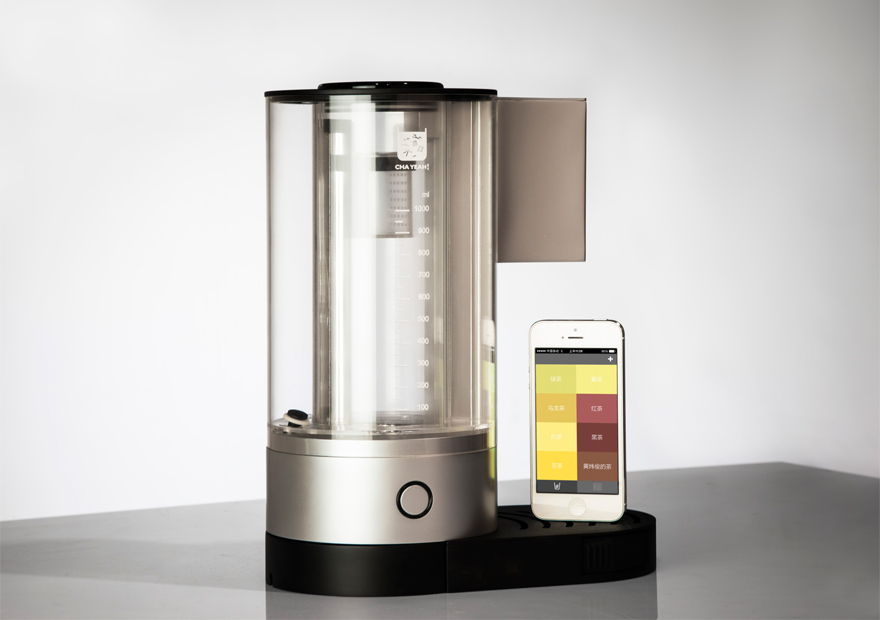 Despite the popularity of coffee and qishui (soda), tea endures as a staple beverage in China. "By studying both Western and Chinese drinking habits as well as the day-to-day lives of young people," Huang Weijun notes. The "Cha Yeah" smart kettle/steeper is app-controlled...

Cha Yeah is a smart brewing system for different types of tea. It challenges the idea that authentic tea culture is available only to the committed connoisseur using ancient implements. Through studying both Western and Chinese drinking habits as well as the day-to-day lives of young people, the designer worked on a product that complements current trends whilst providing a useful source of reference and education in the correct preparation and consumption of different teas. 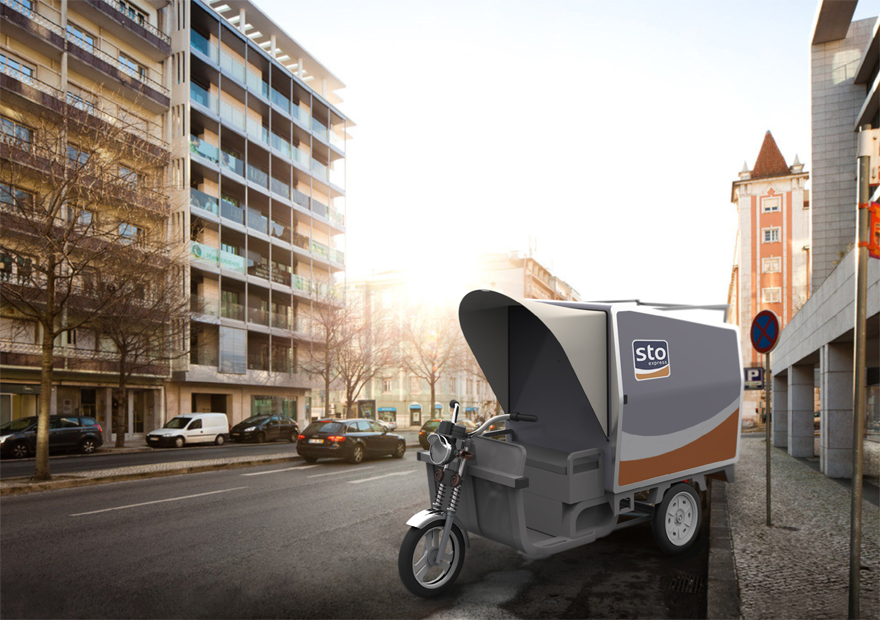 The designer cites astounding figures in her research: On average, so-called "three-wheeled carts" (motorized cargo trikes) deliver 1.3 million parcels a day and upwards of many times that during holidays. These vehicles are effectively driving the growth of China's domestic e-commerce industry, yet drivers work for long, back-breaking hours for little pay. (Hughes noted that she also made a full-size model but that it was discarded following the graduation show; unfortunately, the video is merely a slideshow.)

This project seeks to develop the courier vehicle with respect to the very specific task that it and its driver have to undertake. Because the production of these vehicles is relatively standardized and highly dispersed, the project's main focus is on the rear compartment and accessories. Through careful research and testing, the designer hopes to be able to improve the efficiency and working environment for the vast and growing number of couriers who are fuelling China's domestic consumption. 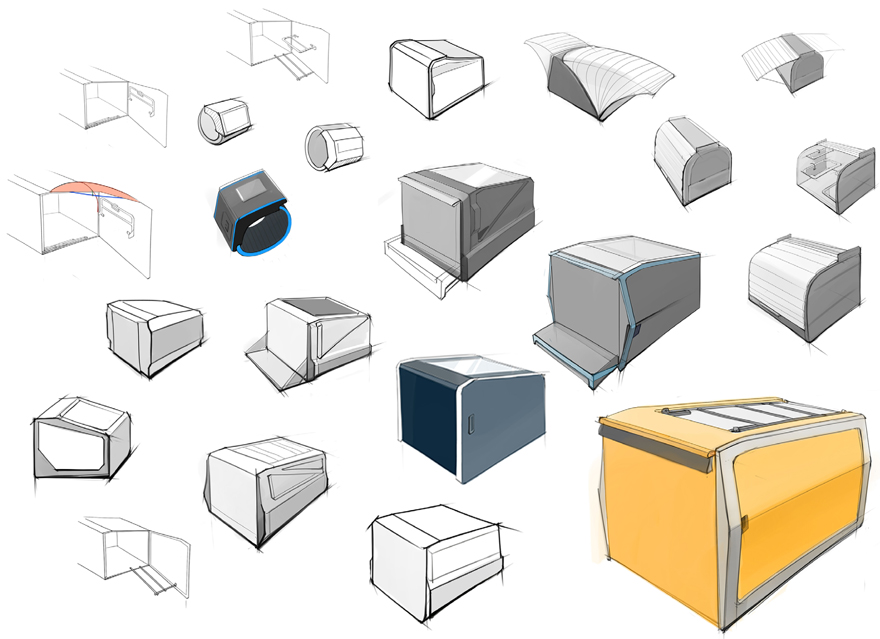 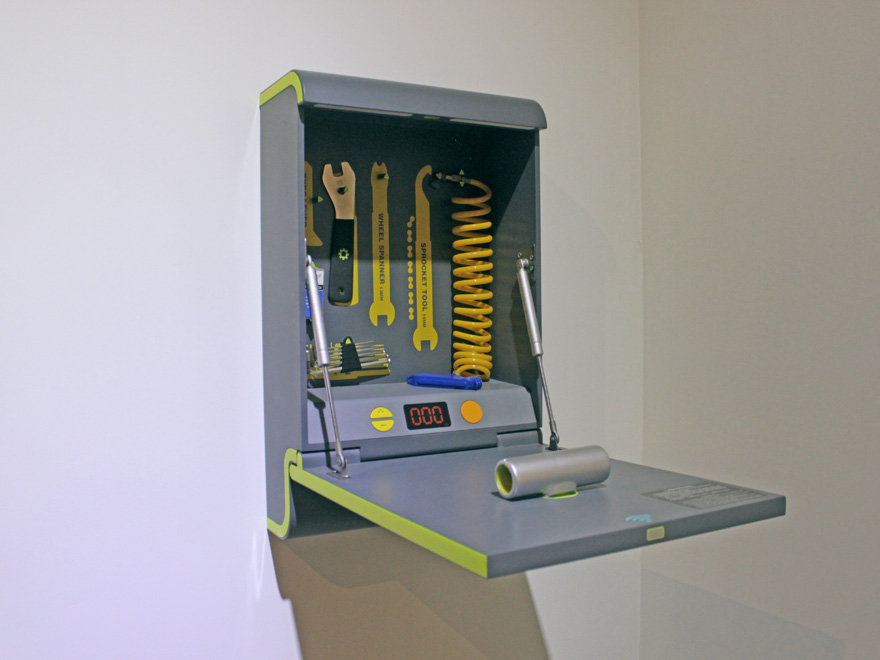 My gut instinct is that the service station concept seems more plausible than the storage system; see the video for more.

This product is designed for users of lightweight bicycles. The locking and storage mechanism is incorporated into a bracket, which is fixed to the frame. After purchasing the bracket, the user has access to the storage and maintenance service. Logging into a user account via the smartphone app gives access to the system. Parking hooks descend to which the bicycle is clipped and then hoisted to a location inaccessible to thieves. The repair kit is also accessed via smartphone. 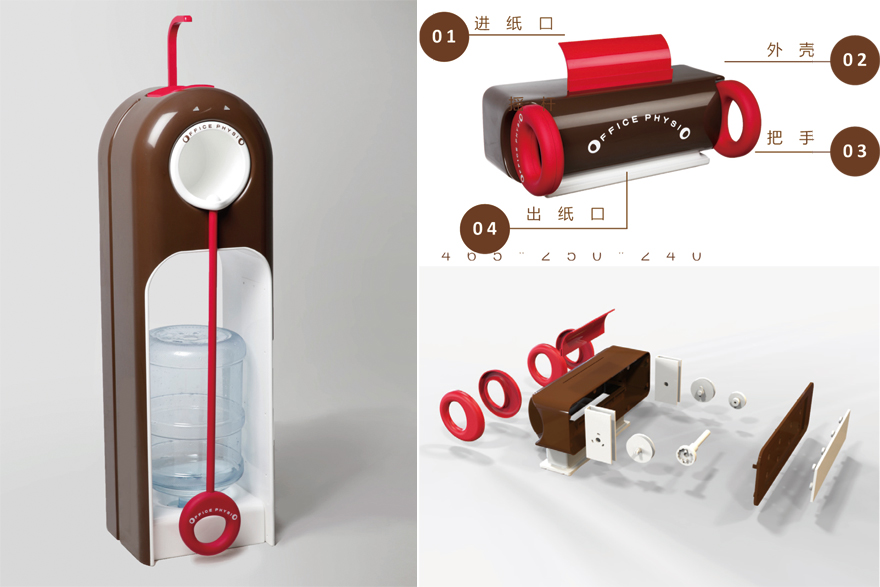 A rather playful pair of hypothetical hybrids turns an office into a gym. The water cooler and paper shredder can be operated only through a bit of extra exertion.

The contempoarary sedentary workplace is not a good environment for healthy living. Workers are required to sit for long periods and finding time for movement and exercise is not a priority. This project looks at incorporating stretching equipment into office furniture and accessories in a fun way. It was informed through user research in offices around Beijing. 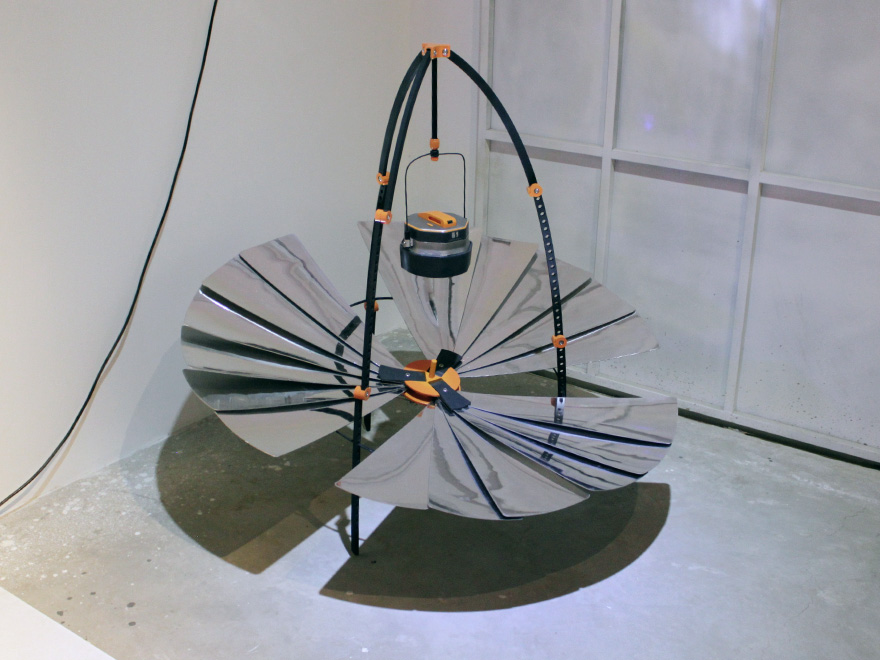 This decidedly futuristic looking object is a combination of a solar cooker and a standard camp stove, plus a built-in thermoelectric charger. (In short, it's a SolSource combined with a Biolite Stove.)

Power Ranger combines a number of useful technologies into a single product for use by remote communities or travelers. The ability to cook and heat water using either fire or solar power makes this idea particularly versatile. The addition of a thermoelectric module gives users the ability to generate electricity from either source. This project recognizes that the need for electricity in remote places to power communication and lighting devices is almost as important as generating heat for warmth and cooking. This project combined both electronic and engineering problem-solving in its quest for a solution. 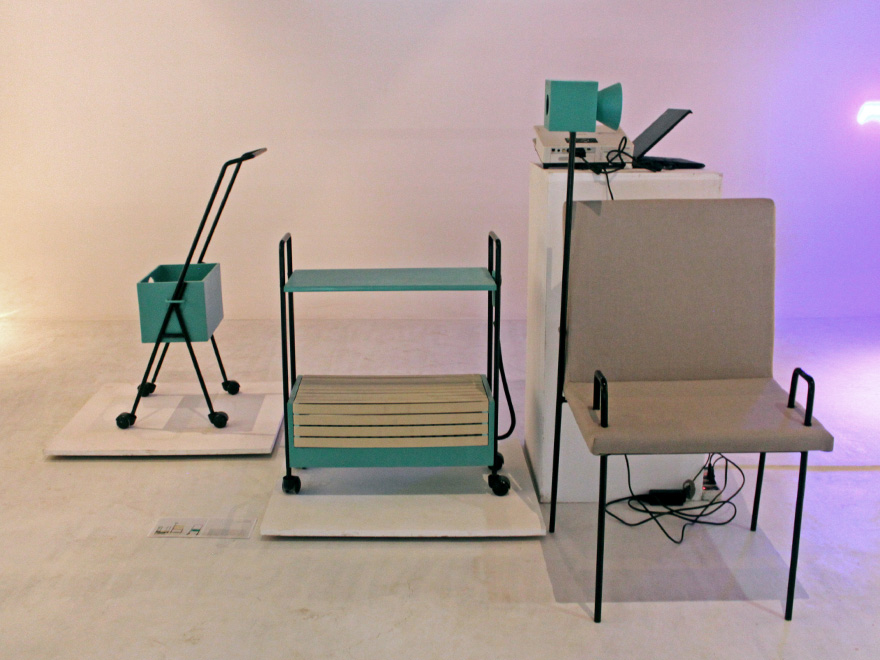 Since it is the Chinese youth that typically make headlines, it is easy to overlook the nation's elderly, who make up a substantial proportion of the population.

Accompany is a collection of products designed especially for the elderly. It originated through a consideration of elderly people's emotional as well as practical needs and seeks to emphasize the relationship between people, rather than gadgets, to achieve this. The emotional comfort of the user was not the designer's only focus, but also to remind younger members of the community that their help in caring for the elderly is valuable and respected. This project was informed by extensive research and testing in an old people's community where the designer is a volunteer. 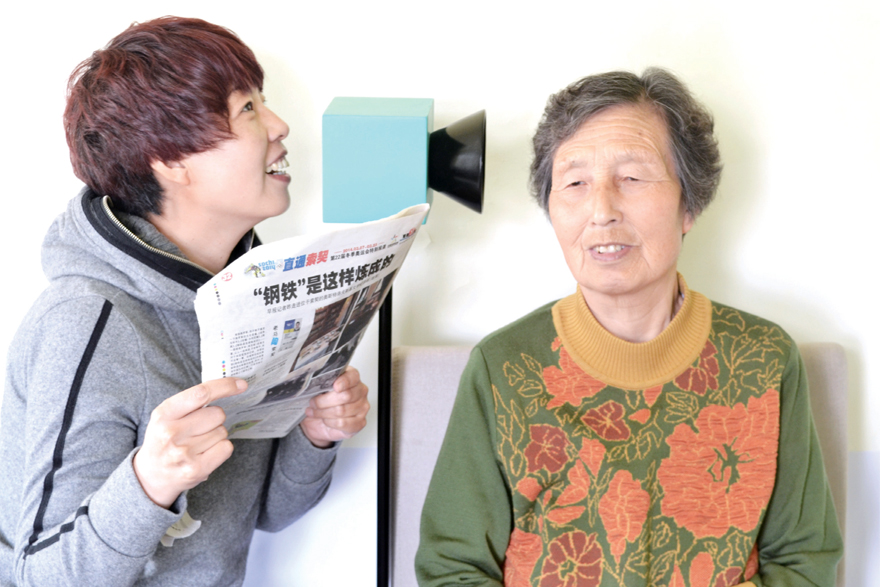 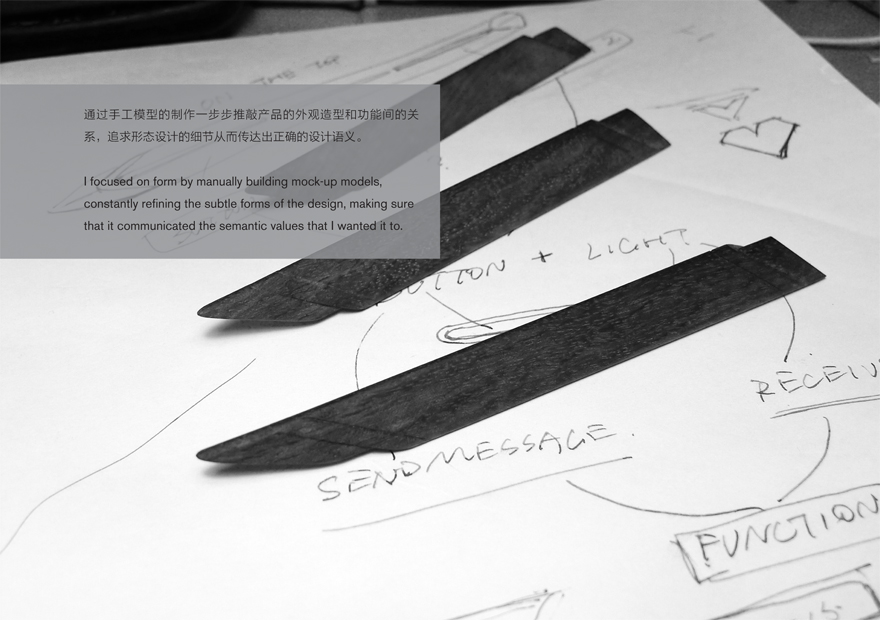 Clever though it may be, this smartpen communications device is admittedly not quite producible: Jiang reportedly collaborated with an engineering student from Tsinghua University to develop a working prototype, housed in an AC-powered enclosure that is roughly the size of a projector).

PENPAL is a re-imagination of how handwriting and calligraphy could be more intuitively incorporated into electronic communication. With the constant advance of technologies such as instant messaging, text messages and email, the emotion and feeling conveyed by a handwritten letter is becoming extinct. The art of handwriting and calligraphy amongst the general population is rare. This project seeks to bridge the gap between analogue and digital communication, providing users with a convenient and efficient channel to get their message across without losing personality and emotion along the way. One end of the pen is for writing—as it contains no ink or grpahite, the user can use any surface they like. The other end is for projecting messages using a rapidly moving laser beam. As with the writing side, any surface can be projected on. The designer not only generated a novel user interface but also developed a working prototype using innovative laser technology. 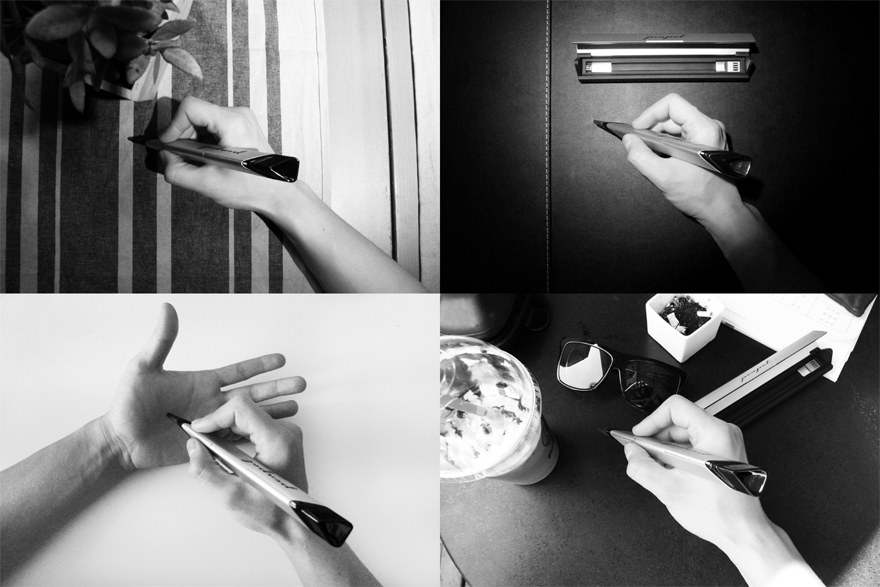 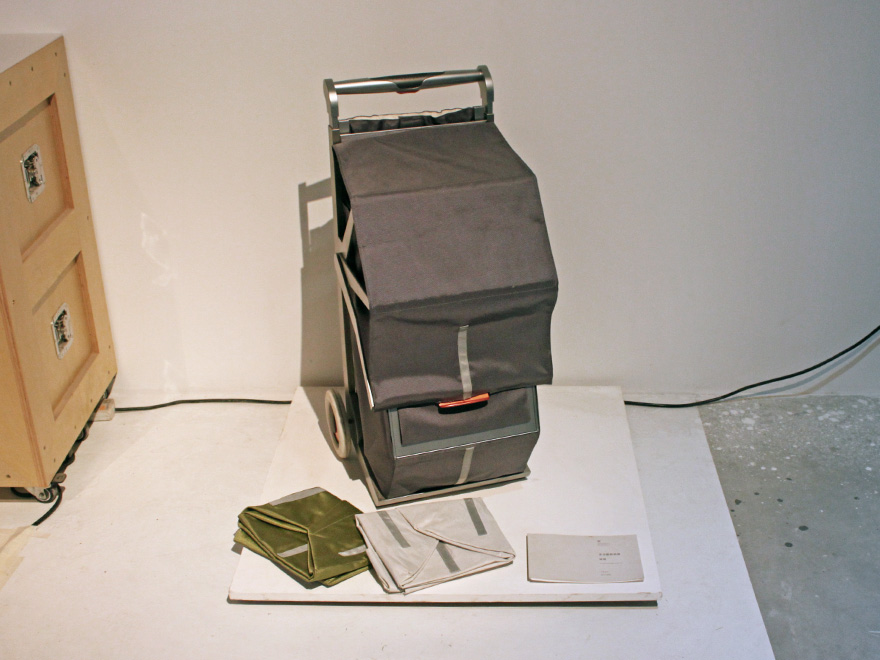 The collapsible cart also happens to be a common sight here in New York City—and any walkable city, for that matter.

This trolley has been developed specifically for users in Beijing with whom the designer conducted extensive research. Classifications of different vegetables, fruit, rice and flour products led to a storage and transportation system that can take the shopping home via public transport in a comfortable and efficient way. Even the way that eggs are sold (loose in bags) has been taken into account. The design incorporates robust, lightweight and reflective materials for strength and safety. 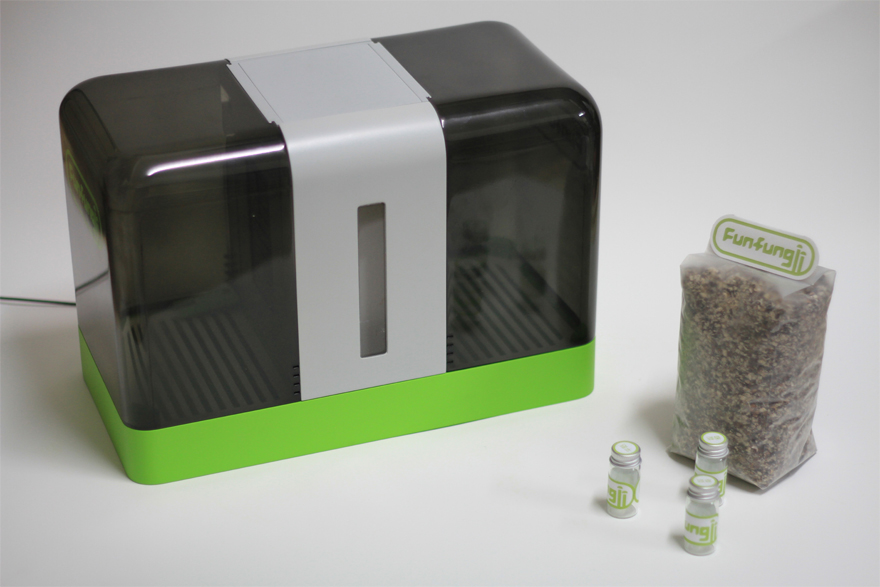 As in the Western world, the food movement is catching on in China, including home gastronomy.

FunFungi is a smart device which helps users to cultivate edible mushrooms conveniently in their own home. The process is very simple—users place the compost and seeds in the containaer which will then maintain the optimal environment to promote the growth of the mushrooms. Several varieties may be grown and once underway a crop can be harvested every 8–10 days. Users are also encouraged to make their own compost from kitchen waste in the special reusable caddies. 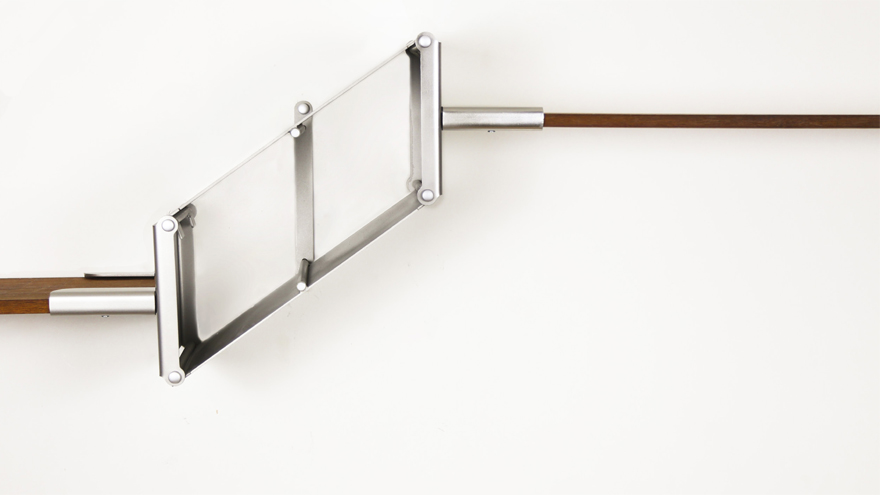 This wall-mounted shelving unit features a scissors-hinge at its attachment point, such that both halves must be balanced in order for it to function properly.

This project explored a number of interpretations of what it means to be 'balanced.' One of the outcomes, a bookshelf, encourages users to consider a balance in their reading habits. This may be between the consumption of magazines to books, of serious vs. lightweight literature, of books bought vs. books read. Achieving balance in one's lifestyle is a recurring theme for designers in China and this animated bookshelf is a fun and expression of this notion.