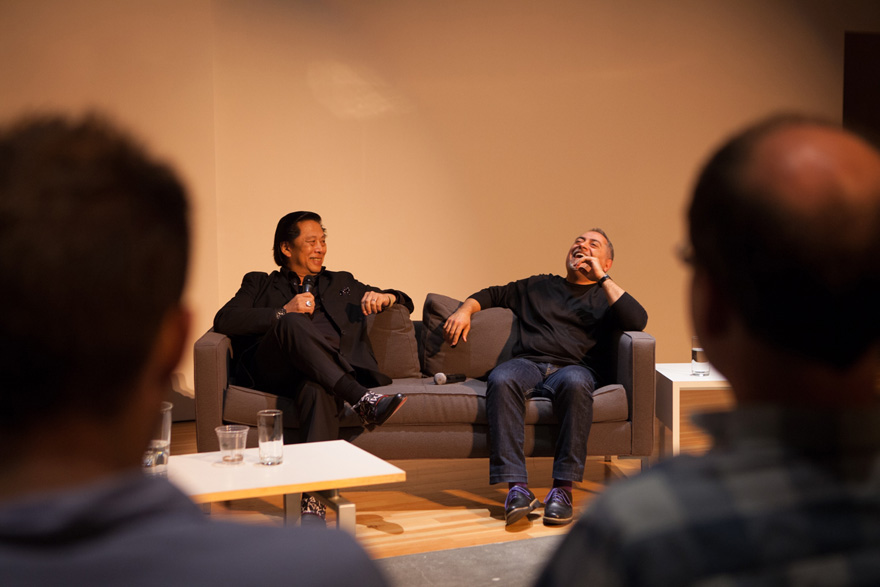 Ziba turns 30 this year, and the renowned design company is understandably proud. To celebrate the diverse and lasting work of founder Sohrab Vossoughi, he and other design veterans discussed the future of product design. On the panel were Vossoughi, Allan Chochinov of SVA and Core77, John Jay of Wieden+Kennedy, and Aura Oslapas, previously Chief Design Officer for Best Buy, with questions and moderation by Carl Alviani. These folks had strong opinions, punchy advice, and more personality than your average lineup of industry heads. Here's our synopsis of the key questions and insights.

The definition of "product" has shifted over time. What does it mean now and why?

Oslapas started off clarifying that a product has come to describe services and software, in addition to hardware. Vossoughi agreed, but pointed out that even as design becomes more integrated with business the consumer still thinks of "product" in physical terms. Jay, as a communications and advertising pro, disagreed, pointing out that in his field of design creating an emotional response and relationship to another product is itself a product. Chochinov jumped on this, noting that Product Design has never been a particularly clarifying term, and now the growth of interaction design has made things even more complicated: "I can never hope to have a career moniker that makes sense. If it weren't so funny it would be cruel." Referencing the recent Facebook/Ello debate, he pointed out that point of view is everything, since from one angle Facebook is the product, but in reality it's us the users who are the profitable product. Oslapas countered that consumers still call the product by what it is, unless there's an issue—"product" is just a business term for the thing that we sell, rather than name or noun used by the user. In Allen's words: a product is something that needs to be fixed.

What are new impacts on the field and practice of design?

Social media was the first, albeit obvious, theme. In Jay's estimation, user engagement is empowering enough that it's changing everything. Ideas necessarily have to come from different places, and the production process is no longer a Push theory from the producer's end. Oslapas credited design methodologies and tools that cross disciplines. Prototyping tools and new work models are both rapidly shifting expectations towards greater collaboration.

User-centeredness, as Chochinov put it, is design's current but deeply problematic frame. "Users are part of the problem! Earth-centric design won't fly with consumers, but it's essential that we use the privilege of the design community towards making something of use at all." This shifted into a scathing critique of what he sees as the main goals in design, namely providing convenience, beauty, pleasure to anyone with the disposable income to afford it. 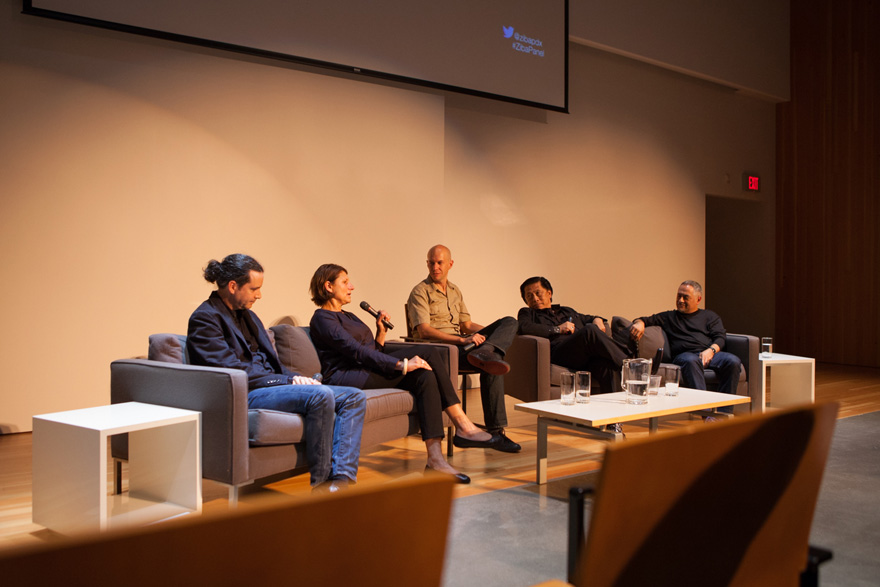 Not everyone agrees that emphasizing beauty is a problem. Is beauty necessary, or missing in design?

Jay votes yes on both. He believes there is beauty in contemporary design, but it can be missing from the conversation. Particularly having spent a lot of time working in Japan and with Japanese designers, he finds the lack of harmony and nature-mindedness in the global scene troubling. But visual attractiveness obviously isn't the only issue or point of good design. As Chochinov pointed out, beauty is naturally attracting and can be used as an introduction to ideas beyond aesthetics. And what is beauty in the design context? As Vossoughi put it: beauty is when it feels 'Just So Right. '

Technological tools for designers are more powerful and abundant these days. Is this pushing democratization of design? Or just fancier hobbies?

Straight out the gate, Vossoughi is not a believer. "When you're problem-solving it's not about democracy. It becomes a giraffe!" Synthesizing thinking, in his opinion, can't be made democratic. Oslapas is a fan of the idea, citing magazines like Dwell and Wired as proof that sharing information and opening up a dialog about design helps consumers make decisions about their own lives. She's not arguing against retaining specialists, but that having a better informed provider and consumer is good. For example, when choosing health care solutions having easy access to information about treatments and others' experiences can help clarify choices, but doesn't invalidate the work of individual doctors.

Chochinov disagrees all around: "Professional designers have made a huge mess." Whether or not the scrabbling crowd can equal experts' quality of work, he's interested to see how opening up the process will go. Particularly, he posits, since the consequences of the traditional production loop are terribly underestimated by designers. The assumption that "good design" means scalability relies on a repeating cycle of wasteful making and consumption. This Right Way isn't the only way to do design, and he's happy to see more people getting involved in ideation and production, other than the professional (and change cynical) designers and marketers. Along with the obvious bad ideas will come some good ones, and he's excited to see what the Not Correct methods can do.

Vossoughi is skeptical about what will happen "if we let everyone start making crap." Jay is more neutral, since by now it's an old story in advertising. YouTube, for example, is largely crap but it has also challenged and changed the media landscape. "Institutions shouldn't coddle experts."

Allen also noted that design has never been a licensed profession (and good luck making it one), maybe in part because a central conceit is that industrial designers do things because they've never done them before. 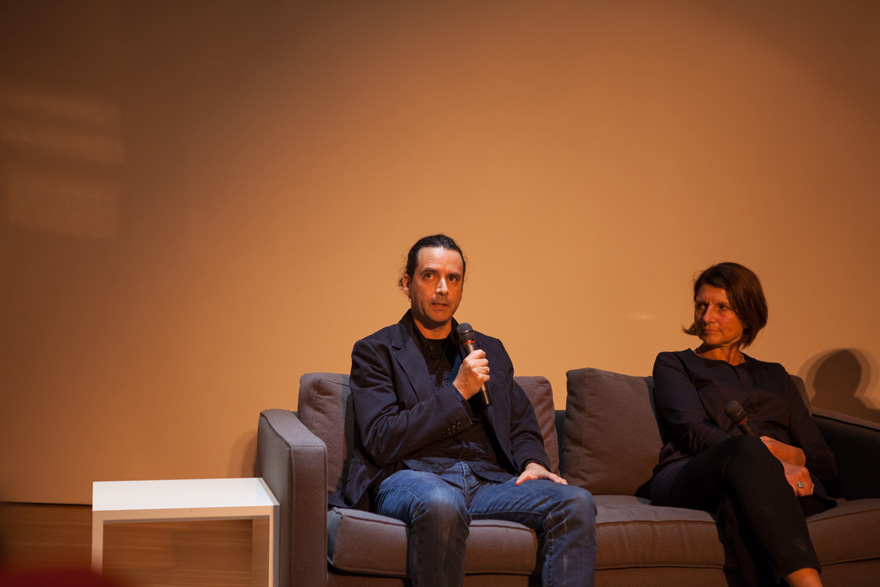 What's the role of design education in the future? Is the focus still tools and technologies?

Everyone agreed that design education is in a tough spot. There's still a ton of critical thinking and research skills to learn, as well as history and cultural context, multiple types of CAD and digital tools, way more marketing and branding, and then the whole physical creation side... and all in just a couple short years. Oslapas noted that program maturity is helping reign in some of the chaotic needs. Chochinov believes that a program's point of view or mission is increasingly vital to making sense of the wide range of knowledge required. In the future education should build beliefs beyond being in service to industry, since "design being in service to industry is a bad idea!"

Jay sees intercultural understanding as vital, and requires his creatives to deeply immerse in whatever culture they're designing for to get an honest and appropriate base. Sohrab just looks for potential, and assumes that the real education is his job.

What design practice shifts do you predict in the next 5-10 years?

Everyone seemed to feel that Design is in a moment of clarity and opportunity. Jay believes that increasing cultural diversity is a positive trend, partially responsible for the current golden moment. Oslapas sees the design industry beginning to integrate even more immediately and intimately with business.

Chochinov's advice: Find the most fascinating people, doing the most fascinating work, and make them hire you. "Design is made of people, not things. Even bigger social issues like clean drinking water, that's made of politics, which is people too." Jay's advice: "Try not to work for stupid people. It's incredibly contagious." Vossoughi: "Find the purpose, and work within your context." Oslapas: "Just find what gets you up in the morning and totally immerse yourself in that."

What's your most poignant moment in the last 30 years?

Aura pointed to the invention of the PDF. Jay recalled the feeling of restructuring W+K into a foundation, designing the organization itself so that the vision and hard work of contributing designers couldn't be taken over and ruined by an acquisition. For Vossoughi, it was having his own underused drafting table given to someone else and realizing that it didn't mean he was doing less design but designing Ziba's future.