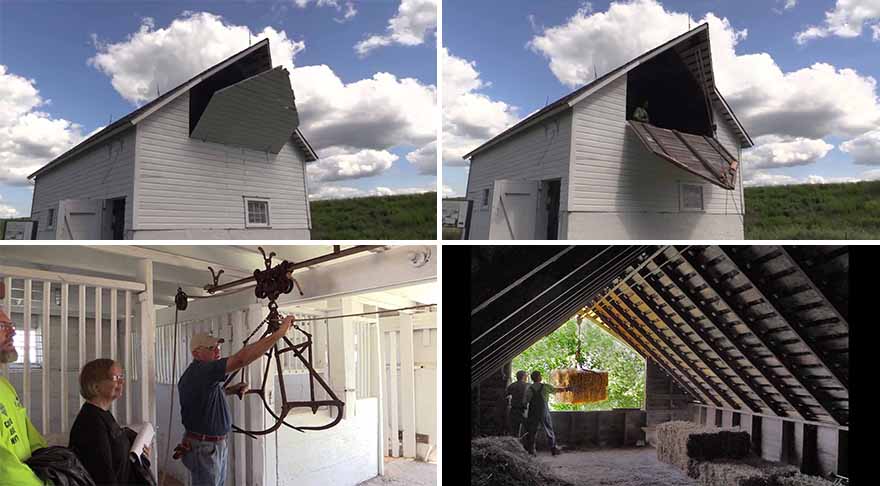 One of the first issues dealt with by the earliest farmers was where to keep their livestock. So they designed and built barns. They also needed a place to store the hay to feed those livestock, so the hay went into the barn too. The amount of livestock a farmer could keep, and feed, was thus limited to the size of the barn's footprint.

One early design solution to this limitation was to add a hayloft, or "mow," so you could keep the hay up above and maximize your floorspace below to house more livestock. But getting all that hay up to the mow was a lot of work, even after you rolled the hay wagon into the barn and stood on it to get a little extra elevation.

Enter William Louden, one of nine children born on a farm in Iowa in the 1800s. Louden was sickly and suffered from rheumatism, meaning he couldn't engage in the farm labor that his siblings did. But by observing their work, specifically the way that they had to pitch hay up onto the mow from the wagon, he designed a clever way to cut the workload down drastically. 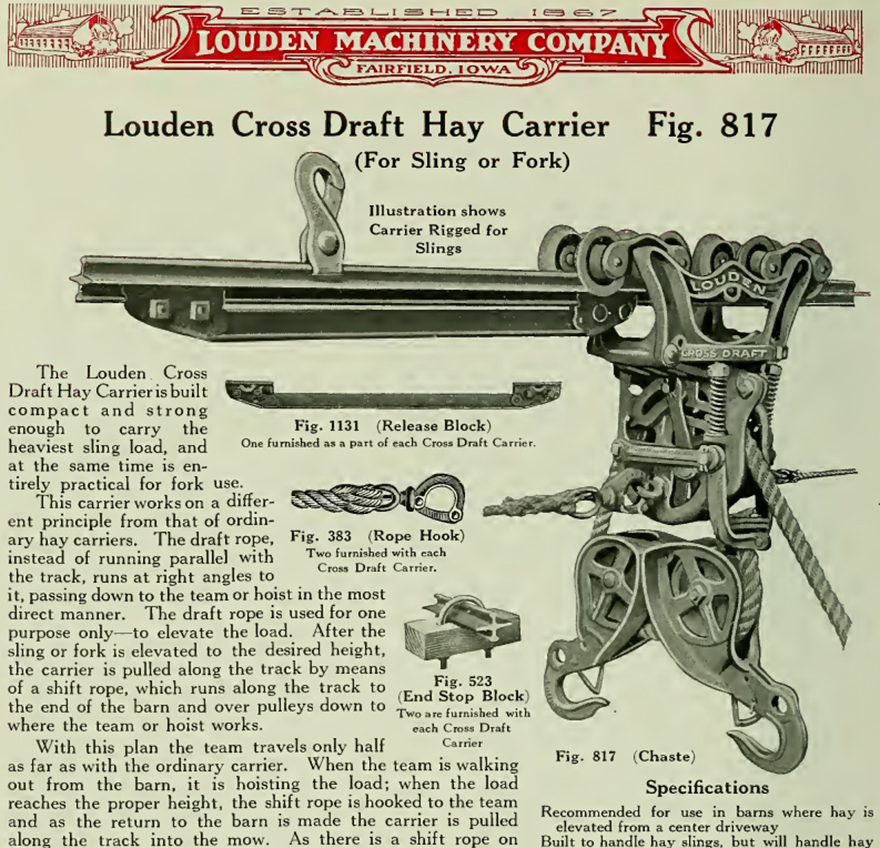 This being 1867, ropes, pulleys, wheels and beams had all long existed. But Louden put all these things together in a novel way, starting with the beam, which he suspended from the ceiling and used as an overhead track—an early monorail. His resultant monorail-based design for a hay carrier allowed men to get bales of hay up into the mow with a fraction of the effort required when done manually. Here's a modern-day demonstration of the Louden Barn Hay Carrier:

Louden patented the design, eventually switched over to steel rails, and over the coming decades, sold millions of dollars worth of units. "As farmers began to use [Louden's] hay carriers," says The Biographical Dictionary of Iowa, "the design of barns changed radically; they could be built higher and longer, enabling farmer to store more hay, which in turn meant they could keep more livestock over the winter."

Louden rode this wave by expanding his Louden Machinery Company, which had grown to produce a number of farm goods, into the specialized field of barn architecture. He incorporated not only his overhead carriers adapted to a variety of uses, but innovations like cupolas for ventilation and even low-impact flooring made with cork that minimized livestock leg injuries.

As World War I broke out, Louden's overhead monorail system found its way into ammunition factories, and by the 1920s General Motors was using them. Louden died in 1931, aged 90, but his company lived on in the hands of his eldest son. "By World War II," according to a written history from the North American Hay Tool Collectors Assocation, "many major manufacturers used Louden material handling equipment; including Boeing's B-29 aircraft plants. Louden was also chosen to construct the material handling devices during the manufacture of the atomic bombs in Oak Ridge, Tennessee." And by the 1960s, it was Louden cranes and tracks that handled NASA's Apollo rocket at the Marshall Space Flight Center in Huntsville, Alabama.

Here in 2014, manufacturers can still purchase overhead monorail conveying systems with the Louden—now Acco-Louden—name. Not too shabby for a skinny kid trying to figure out how to get hay up into the mow.

You can read more about Louden and the full range of his inventions here.