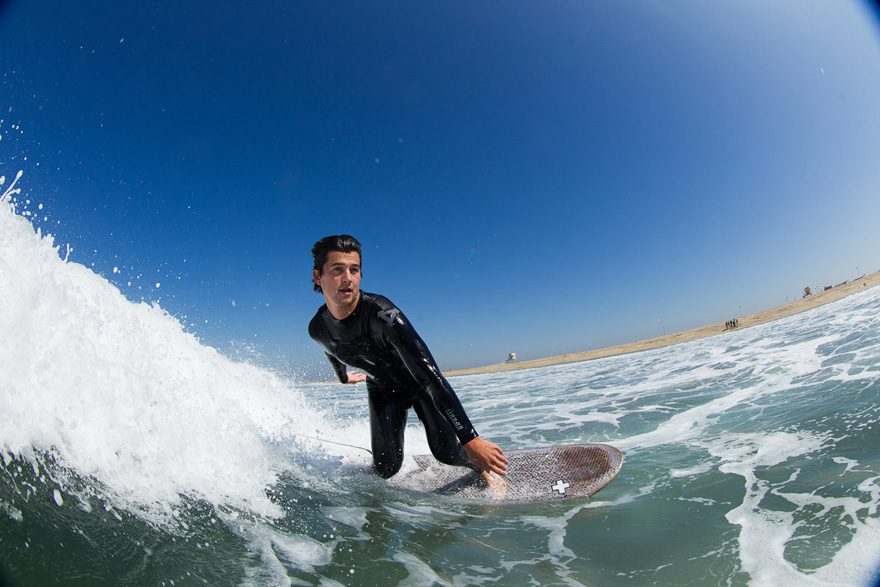 If you have ever shipped mass quantities of products worldwide, it's likely that you've worked with a packing solutions company. Experts in cardboard, foam and other packing products, these companies work with clients to make sure your beautifully designed product reaches the hands of consumers in one piece. "It's like the walls of a house in a tornado," explains Mike Martinez, Director of Consulting Services at Ernest Packaging Solutions, based near Los Angeles. "We protect your contents from the outside elements."

But that's not all Ernest Packaging Solutions does. Last month, to kick off its Cardboard Chaos series—in which the company hopes to push its skills by inventing alternative uses for its paper products—Ernest collaborated with Signal Surfboards to create a cardboard surfboard, a far cry from its daily services.

Martinez led the endeavor, putting together a small team at Ernest with each member specializing in various packing techniques, from food handling to shipping fragile china. The crew at nearby Signal Snowboards introduced Martinez and his team to Jeff "Doc" Lausch, a legend in the world of surfboard shaping. With Lausch's help, the team decided to model its board after a standard foam surfboard, using Hexacomb, a paper-based honeycomb, as the underlying structure.

Taller and thicker than cardboard, Hexacomb's structure makes it ideal for safeguarding objects, with crushable air cells that protect on impact. In a surfboard, these pockets of air provide buoyancy. "To recreate a foam-core surfboard out of paper, we needed to maintain buoyancy through compartmentalization that will keep that air inside," Martinez says. "Foam is just a bunch of small, trapped air bubbles. We wanted to create these air pockets and knew that Hexacomb was a great medium to do it." 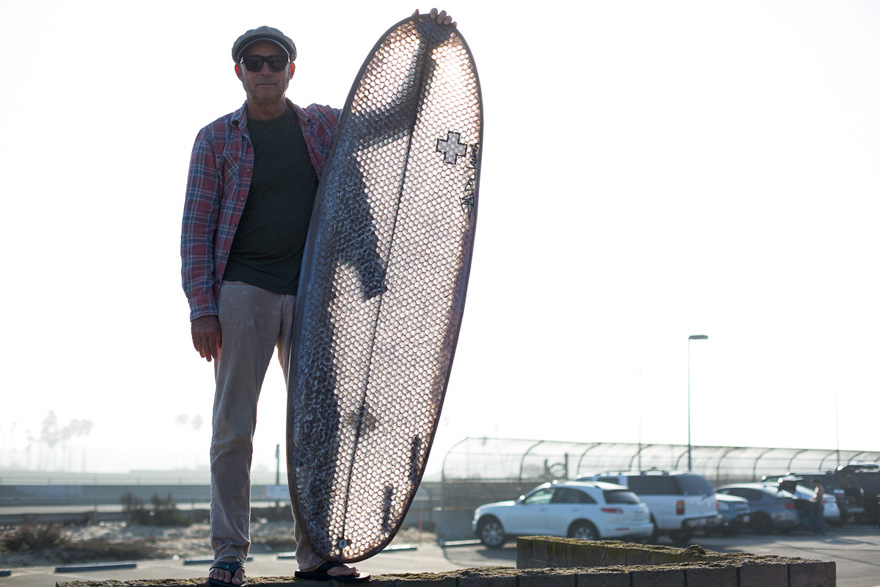 With a material chosen, the next step was to create the core of the board to be CNC milled. Since Hexacomb is made of paper, it is too fragile to be CNC milled alone, flopping and bending on impact. Martinez and his team decided to reinforce the material using spray-on polyurethane to coat the honeycomb and provide enough rigidity to be milled—a process that involved tedious trial and error. "There were several pieces where we were too aggressive with how much poly we put on, so that it weighed down the paper and broke the bond [of the honeycomb]," Martinez says. "When we tried to bend it, it would break. If there was too much poly, it would turn to mush and stick together. We walked a fine line and to get it to the point where we could cut it for the shaping process."

The sturdy, polyurethane-saturated honeycomb was brought to Lausch, who shaped the board to his design, first roughly with the CNC, then by hand. The edges of the board were wrapped in corrugated cardboard and additional cardboard was die-cut to create the board's stringer, which gives a surfboard its strength and rigidity. The honeycomb was cut using a dado blade to create room for the stringer, which was integrated into the board before being coated again with polyurethane and wrapped in fiberglass and resin to seal the board and make it watertight.

Once the board was shaped, Ernest Packaging worked with friends at Futures Fins to create fins for the board and get it ready to ride. Ernest elicited professional surfers CJ Kanuha, Brennan Clarke and Jeff Deffenbaugh to put the board to the test, riding it on a local California beach. Based on the video below, it seems like a success.

While Martinez and the team had a great time seeing the cardboard surfboard to fruition, they do not have any plans to bring it to market—Martinez says that their real passion is solving problems for customers. He does, however, hint to the next edition of Cardboard Chaos, already in the works. "Right now, we're working on a strider bike for kids," he says. "There will be a surprise in that video that I won't tell you about, but it's worth the wait." The video he mentions is slated to be published in three months, so we'll just have to check back then.