With three years under its belt, Design Week Portland is starting to take on a clear character. With a central theme as broad (bordering on meaningless) as 'design,' it's natural that every city and organizing body will produce a distinct festival. So far Portland Design Week closely reflects the current trends in the city's industries and culture. The prevailing emphasis is on graphic design, traditional crafts, storytelling and skill-sharing. Fittingly, some of the clearest examples took place at the new Design Week HQ. The physical HQ, located in the heart of downtown under a series of conspicuous domes, was a hub for info and for a rotating series of artists and performers. Each day different artists did time illustrating bright banners inspired by tweets from the #dwpdx hashtag. The banners were color coded by day, and filled the courtyard over the course of the week.

Music, dance, and talks filled the third dome every day in an intimate (if sometimes stifling) public space. An early favorite was Carl Alviani's "Words Behind The Work," where designers read from works that inspired, influenced or challenged their work. A prime quote: "Just like learning about kerning will ruin signage forever, this is going to destroy your mind about porches." 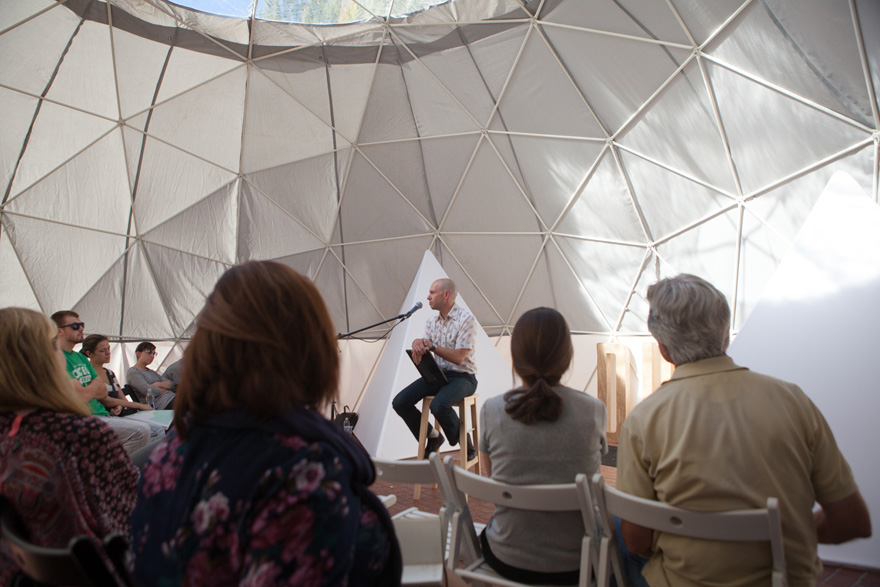 Another notable event was the live drawn history of alphabets by Elizabeth Anderson (of Anderson Krygier) and the following theater piece "The Typographer's Dream," which posed the deeply Northwestern question: 'Are we what we do for a living?' Deep shit, man.

Interactive events were common and productive. IDL Worldwide's merchandising competition pitted visual merchandisers against one another in an aesthetic rumble. The Design Efficiency intensive with Fluid Design doubled down on career skills, both technical and personal, to help designers be more effective. Make/Mend/Reflect, presented by Maker's Nation, offered a multi-discipline series of creativity exercises around embracing ugliness and working through problems. This entailed prompted writing, mending, and ugly creature building. Vital tools for the designer's toolkit(?). The huge number of open houses and open studios were an overwhelming option for interact with brands, agencies, workshops and individual designers. 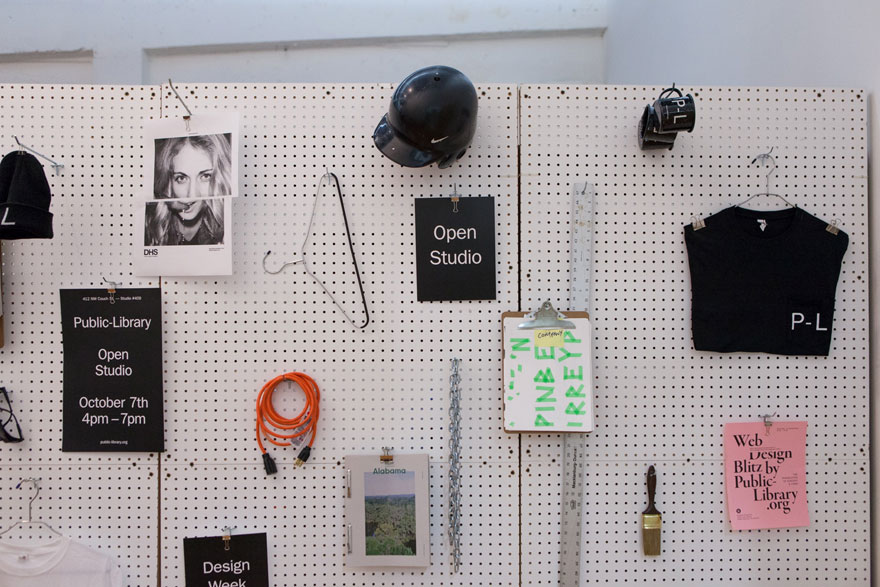 In keeping with our town's twee reputation, traditional crafts were a common subject. Printmaking, woodworking, glassblowing, textile design, letterpress, ceramics, and even macrame were taught, open-housed and exhibited. Among these I was particularly happy to see a panel discussion about bookbinding, book collection and the book as art object on the schedule. Portland may have small art and design scenes but it offers a great landscape for book lovers. The role of art books and publishing in design is both fascinating and evolving, and the panel featured well-informed stakeholders from Publication Studio, Division Leap, Monograph Bookwerks, and Ampersand Gallery & Fine Books.Panels & Presentations

Lord, were there a surprising amount of panels. When you live in a city that specializes in constant mutual assurance everyone is an expert! Thankfully there were instances of high quality group talk. The Hand-Eye Supply panel on how to tell when you've "Arrived" at the right work featured wildly different problem solvers (amp-builder to the stars, small house designer, beer-obsessed notebook publisher, stamp collector, and obsessive compulsive illustrator) who each detailed their risks, wrong turns and motivations. Ziba's panel—30th anniversary edition!—featured OG design minds behind industrial design, design education, mass produced tech goods and advertising for a truly critical look at where design is heading. 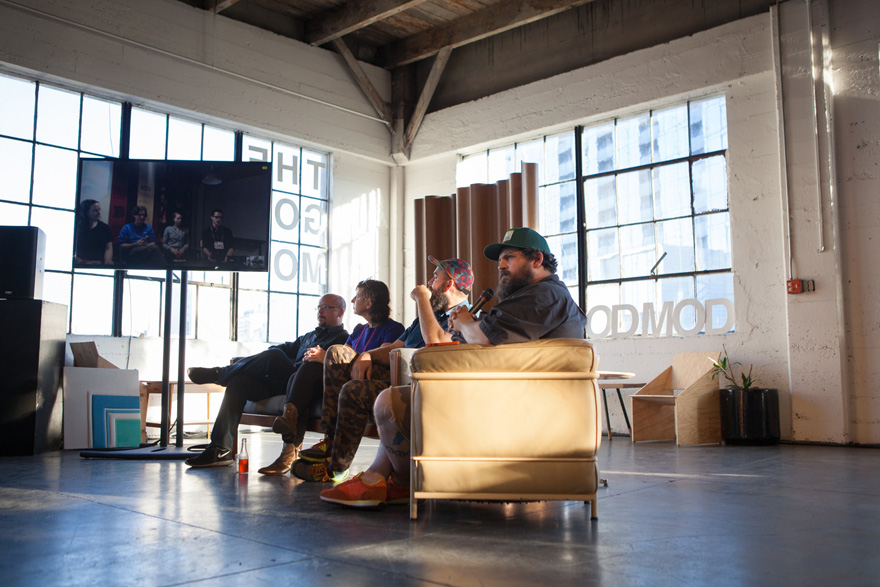 For a slightly younger, more subjective take on the current design landscape, I loved the spirited bi-coastal Google Hangout featuring a PDX vs. BKLYN showdown, surrounded by impeccable mid-century furniture at The Good Mod. On the Portland side, we were represented by Aaron Draplin, Kate Bingaman-Burt, Jeff Kovel of Skylab, and Benji Wagner of Poler, with moderation by DWP founder Eric Hillerns. Meanwhile in Brooklyn, Behance's Clement Fayadi managed the discussion with Ben Pieratt of Svpply and Lookwork, Tina Roth Eisenberg of SwissMiss, and Carly Strife the founder of Bark&Co. In addition to providing pithy insights from eight movers and shakers, Google happily assured that this was the first hangout of its kind. As a weekly bi-coastal video commuter, I'm shocked AND amazed at having been present at this unprecedented event.

Tons of individual speaking events, from the international seat-seller Sagmeister to our locally focused design dilettante Aaron Rayburn, brought the reflective theme all the way home. We heard about personal journeys, happiness and how to avoid totally ruining our finances.

But it wasn't all personal horn-tooting and storytelling. City planning, architecture, and environmental design wonks had their moments to shine as well. Portland's Center for Architecture held an open call for creative concepts that would fill underused public space with interesting playful seating. The three designs selected were to be built and installed in parking spaces in front of the CFA in Portland's Pearl District over the course of Design Week. We had a talk with Michael Graves, and a visit to Maya Lin's history-minded restorative public art on the Sandy River. 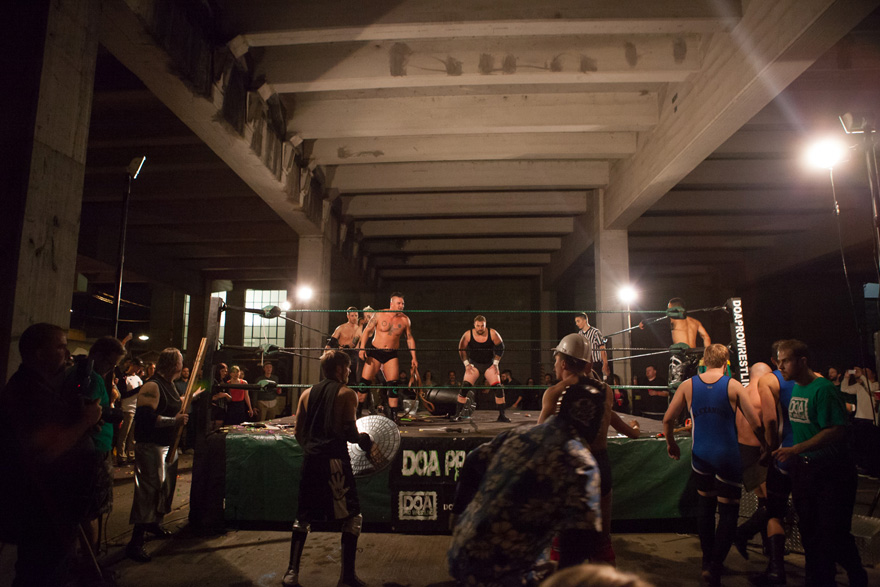 If smarter streets and ecosystems didn't fit your fancy, the Battle Under Burnside brought us a professionally rebranded take on a real pro-wresting show and free beer, and the Official Unofficial closing party was a three-floored affair where you could watch live printmaking and get free tattoos designed by the hosting branding agency. Truly, something for everybody... as long as everybody loves beer and branding.

Rather than elite exhibitions and galas, Design Week Portland is concerned with bettering one's own work, understanding the surrounding world, and deepening the roots of the city's design community. It was an affirming and interactive week, and now, as after any Design Week, I could happily go another year without hearing anyone anywhere self-describe as "a creative."