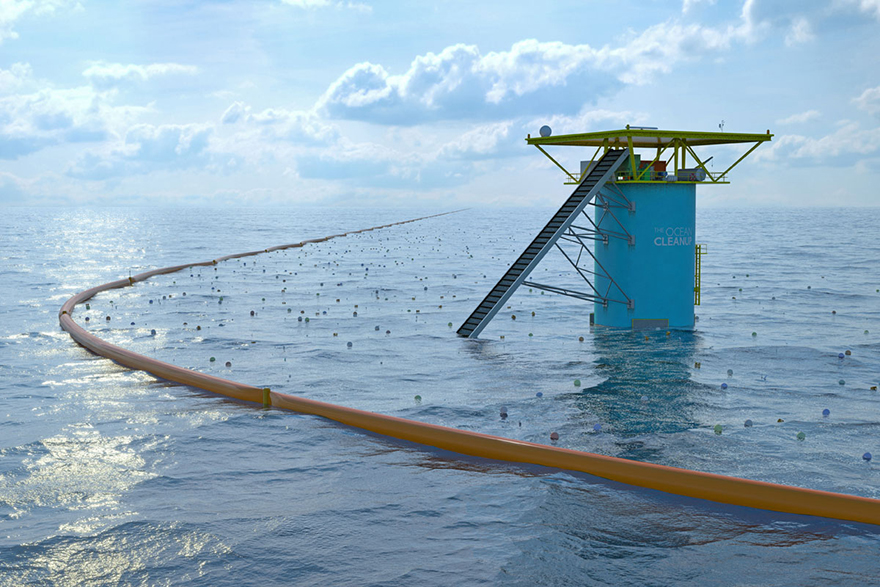 We all know the oceans are filled with plastic waste, and we've seen the horrific photos of dead animals that have ingested the stuff. It is up to activists, responsible corporate citizens and lawmakers to stop these plastic garbage patches from growing. But that won't solve the problem of how to get rid of the stuff that's already floating around in there.

Enter Boyan Slat, just 19 years of age. At 6, he was diving in Greece—that country whose postcards show pristine beaches and blue water--and was horrified at the amount of floating garbage he encountered. "I saw more plastic bags," Slat told the BBC, "than fish." When he returned home to the Netherlands, he started working on a way to rid the oceans of garbage—and his design solution is as promising as it is out-of-the-box.

The conventional thinking goes that ships need to be sent out into these garbage patches with huge tow-nets. The problem is that these nets would capture aquatic life as well as the garbage they're trying to collect. And ships burn fuel. So Slat took a closer look at how oceans operate and how the garbage migrates around.

Oceanbound trash tends to gather into their own little garbage continents, driven by "gyres," or rotating currents. There are five of these trash gyres worldwide.

Although the concentration of plastic in these areas is high—it's sometimes described as a plastic soup—it's still spread out over an area twice the size of Texas. What's more, the plastic does not stay in one spot, it rotates. These factors make a clean-up incredibly challenging.

"Most people have this image of an island of trash that you can almost walk on, but that's not what it's like," says Slat. "It stretches for millions of square kilometres - if you went there to try and clean up by ship it would take thousands of years." Not only that, it would be very costly in terms of both money and energy, and fish would be accidentally caught in the nets.

Slat reasoned that it would be more efficient to let the ocean move the trash around, as it does on its own. We would then simply place floating barriers in the known trouble spots, allowing the floating garbage to simply run into the barriers. Aquatic life could still flow under the floating barriers unmolested, with no nets for them to get caught in, and the barriers would be anchored to the seabed via cables to prevent them from floating off. Garbage could then be harvested and recycled from an area with a much smaller footprint.

What's impressive is that not only did Slat devise this solution, but he's actually putting his money where his mouth is and has dedicated himself to seeing it to fruition. What began as a high school science project has turned into an obsession, one that Slat dropped out of university (Delft, no less) to pursue it full-time.

One early problem was funding. The 200€ that the teenager began the project with was not exactly a round of angel investing, and Slat had hundreds of doors figuratively slammed into his face as he sought financial backing. But after giving a TED Talk that went viral, his crowdfunding campaign landed him over US $2 million, and he was able to set up The Ocean Cleanup as a viable organization.

And while there aren't any gigs there for designers, the organization is currently hiring, for those of you non-creative folks looking for a gig.