Book to the Future: The 'TBD Catalog' Extrapolates on the Way We Live Now (and Ever After) 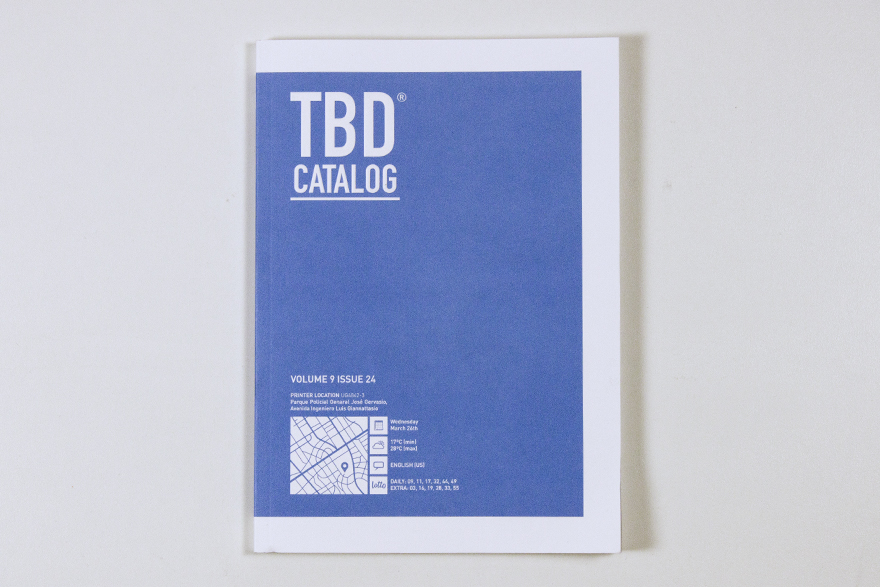 As an industrial design publication, we publish both hypothetical and extant products; as such, we receive a fair share of inquiries, via e-mail or comments, from net noobs about the possibility of ordering these products. Where savvy Internet folk might content themselves with a Futurama macro of approval, we regularly receive reminders that there are plenty of people who think that the internet is not just a big store.

Of course, it takes a more nuanced approach to pull one on those of us who sift through Kickstarter pitches and dubious renderings for a living, and the TBD Catalog assumes a moderate degree of web-weary cynicism even as its pages present a close approximation of novelty, contra naïvity. The short version is that it's a neatly packaged, portable work of design fiction, a vicarious investigation of a near future that may not be the one we want but could well be the one we get. As Fosta (one of the 19 co-authors) put it in his expository piece:

We wanted to talk about a future of middling indifference, of partly broken things, of background characters. A future where self-driving cars weren't a fantasy, but another place to be bored. A future where drones didn't draw gasps of awe, but eye-rolls of indifference. A future where today's 'technology' had become tomorrow's ho-hum.

Reverting to printed matter is, of course, both a way to short-circuit the feedback loop of the Internet and an excuse to produce an artifact as a token of one's efforts (why yes, it is available to order). Although the TBD Catalog is a send-up of invariably utopian futurecasting, it's not so much an outright parody as an exercise in the uncanny: As a work of design fiction par excellence, it blurs the minor distinction between 'fictitious' and 'fictional.' [Ed. Note: I wish I were more intimately familiar with the work of the individual authors so I could speak to how each of them may have shaped the final product, but at this point it seems most fair to evaluate their collective effort.]

While its relatively high production value—semi-glossy though they may be, the pages are a cut above magazine stock—betrays its true nature, the message is not in the matter but the medium. Beyond the cover, it reads as a mail-order catalog at first glance, from the true-to-form layout to the intrinsic stiltedness of stock photography, both of which the authors exploit (and sometimes unravel) to nice effect. Some of the content immediately invites a double take but the authors largely err on the side of subtlety, and the TBD Catalog certainly rewards a closer reading of the images, copy and subtext. 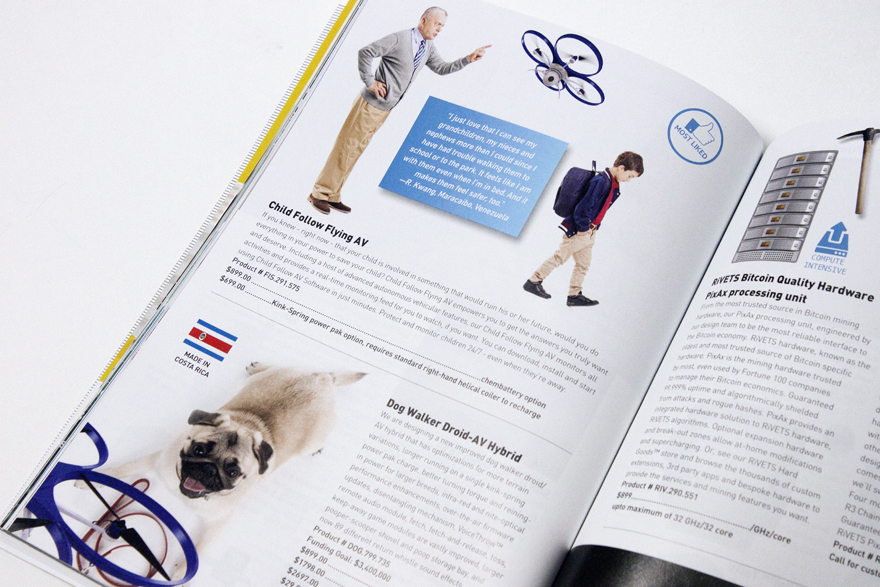 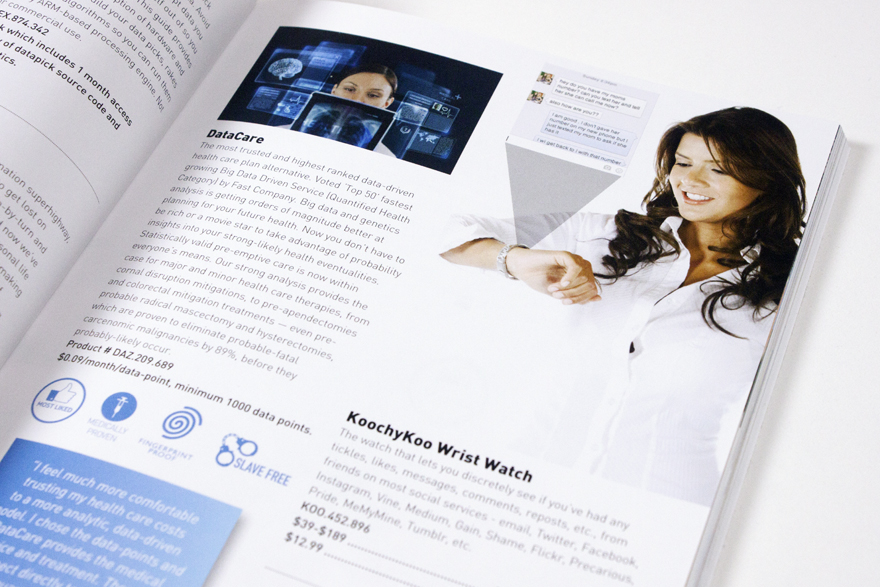 So too are the products as predictable as they are not, described with a granularity that serves as a kind of double commentary: That there is devilish truth in the seemingly trivial or liminal details of bleeding-edge technology. UAVs make their first appearance on page 9, a couple of pages after a satirical Michael-Bay-meets-autonomous-car ad; as ever, health and nutrition are paramount; social engineering crops up alongside consumer-level genetics; 3D printing might not be that revolutionary after all; concepts duly skewer food photography and lampoon wearables; some of the jokes have to do with buying things in bulk.

By far the most common motifs are privacy, security and big data—variations on a theme, perhaps, but easily the prevailing concerns of our time. From the "Anti-Surveillance Umbrella" to the "Home Data Mangler" to the "MeWee [Waste] Monitor," the products, in toto, capture our ambivalence toward the ever-increasing metadata of our lives. Thus, an examination of the zeitgeist through its minutiae yields a cynical—but, crucially, not quite dystopian—picture of the future, and it takes a bit of reverse-engineering to decipher the clues encoded in the mundane, to discern just how the catalog maps onto the proverbial "unevenly distributed future."

Indeed, the language is knowingly arch—marketing mumbo-jumbo written in jargon-y, in media res style à la Gibson—such that parsing the elisions can be something of a mental workout. Similarly, some of the artwork takes the form of glitchy, interlaced or otherwise redacted images to suggest that the catalog is indeed an artifact from a near-future, printed in dynamic e-ink. 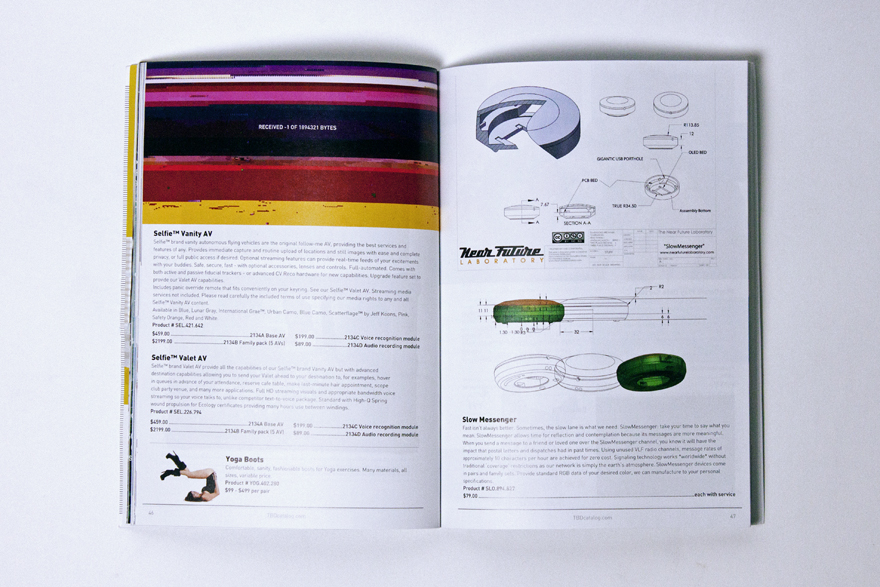 But if the catalog gets ahead of itself at times, so too does it date itself in curious ways: The omission of paralinguistic tropes such as trumped-up next-gen QR glyphs or cryptic machine-readable watermarks (for Amazon phones, of course) seems like a glaring oversight. In fairness, there are icons to indicate everything from "Self Jail-Breaking" to crowdfunding status, but at the rate we're going these days, we may well be communicating exclusively through Snapchat and WeChat (in emoji, no less) by 2016. Meanwhile, truth remains stranger than fiction. We'll leave Ebola out of it, but what about Colony Collapse Disorder? What's up with the self-imposed austerity in Berlin? Shouldn't we be more concerned with, say, plastic garbage patches in the ocean than Bendgate?

If these issues are ostensibly beyond the scope of the TBD Catalog, it's worth noting that by these phenomena could well encroach on our everyday lives in the near future. This, of course, comes with the territory when it comes to prognostication—that reality abides not by the linear logic of extrapolation but a weirder, Brownian process that transcends our powers of understanding and woefully imprecise foresight. 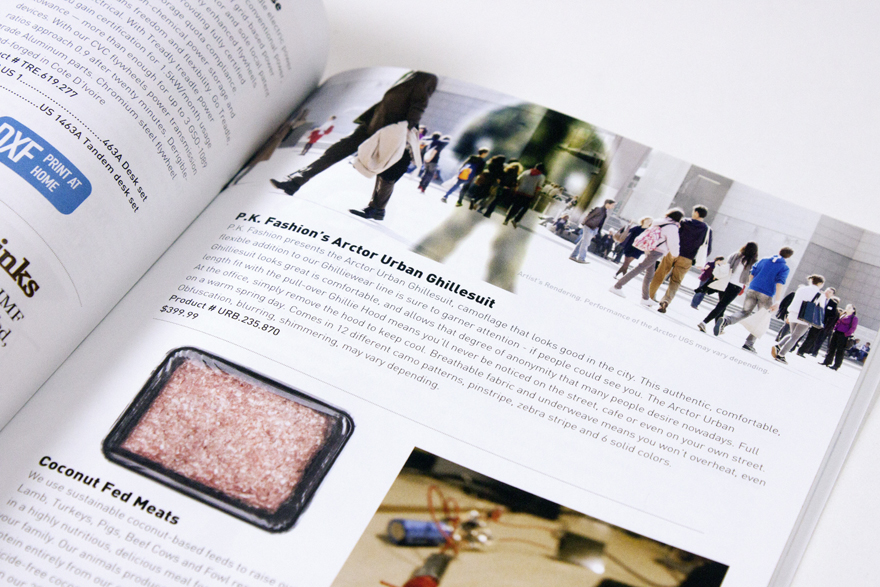 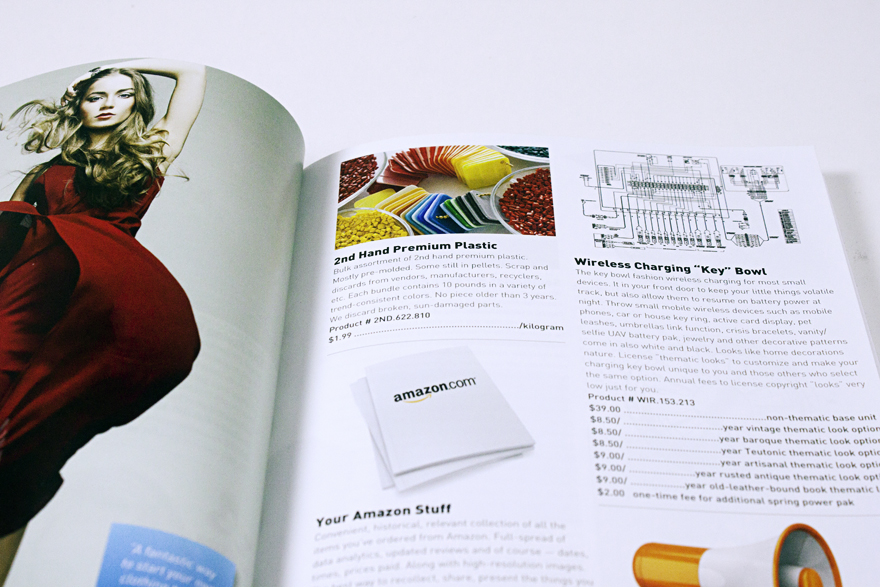 But insofar as it's not an exact science, that's precisely the point. Editor-in-Chief Julian Bleecker acknowledges as much in the edifying (if somewhat discursive) afterword, in which he relates the genesis and intent of the project. He wisely draws the distinction between prediction and provocation, and I appreciate the decision to append the 'reveal' to the end of the piece, following some 90+ pages of convincingly wrought design fiction, rather than at the outset.

All told, the TBD Catalog is a work of paraconceptual design fiction, to borrow the late Tobias Wong's felicitous descriptor: Although every work of design fiction is, to some extent, about design fiction, the catalog collapses the message into the medium as an anthology of the same. Moreover, the fact that it has been published as an accessible design object itself means that it can serve as a serendipitous reference guide to the near future beyond the traditional format of an exhibition/installation, short film and/or website, though of course this also means that, like its predecessors, the TBD Catalog will also persist as an immutable record of our subconscious hopes and dreams for a better future, however banal it may be.

To that end, I almost wish they'd made it a little less precious and a little more disposable—as with the discarded ULINE mailer and this season's IKEA catalog that I can see from my desk, buried under a stack of clutter—in order to achieve greater verisimilitude. The TBD Catalog, in its current manifestation, feels a little too much like an objet d'art than a proper piece of junk mail, an edition to be filed alongside other manifestos rather than a rag to be thumbed-through and summarily recycled. Just as I wouldn't have been surprised to see something like this new-ish Hammacher-Schlemmer-worthy gadget in the TBD Catalog, I can't help but envision a TBD analogue of a Sharper Image or Skymall catalog. 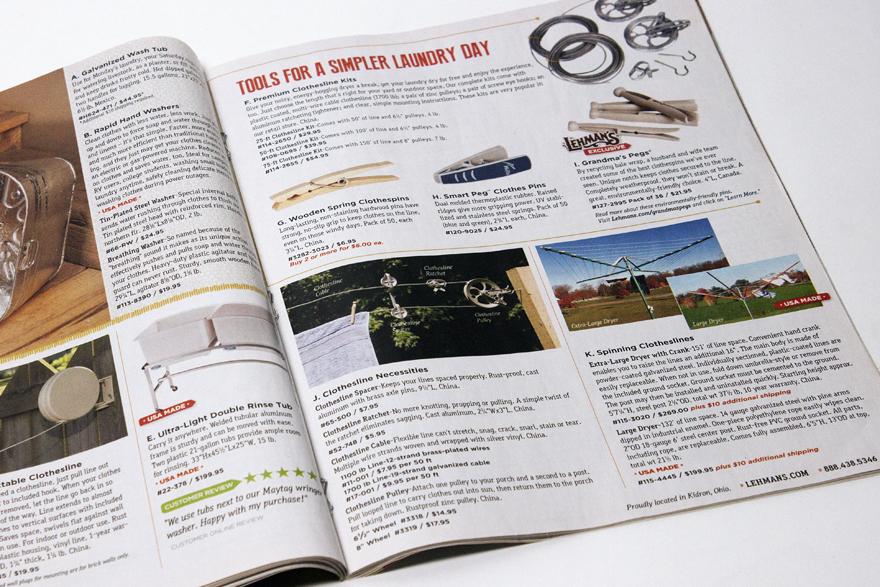 A Lehman's catalog, for reference

That said, it is unequivocally an important piece of work, and these admittedly minor grievances are by no means intended to detract from the authors' truly impressive efforts; suffice it to say that the TBD Catalog is highly recommended. While Bleecker imagines it on the shelves or desks of storytellers and filmmakers, it should go without saying that it is essential to designers of all persuasions. To thoroughly mash the metaphor, it's something like attempting to make sense of the spaghetti thrown on the wall: It turns out that it's more like tea leaves than the written word, but that doesn't diminish the substance or flavor of the food for thought.

Book to the Future: The 'TBD Catalog' Extrapolates on the Way We Live Now (and Ever After)