In the Details: Making a 'Folding Sawhorse on Steroids' 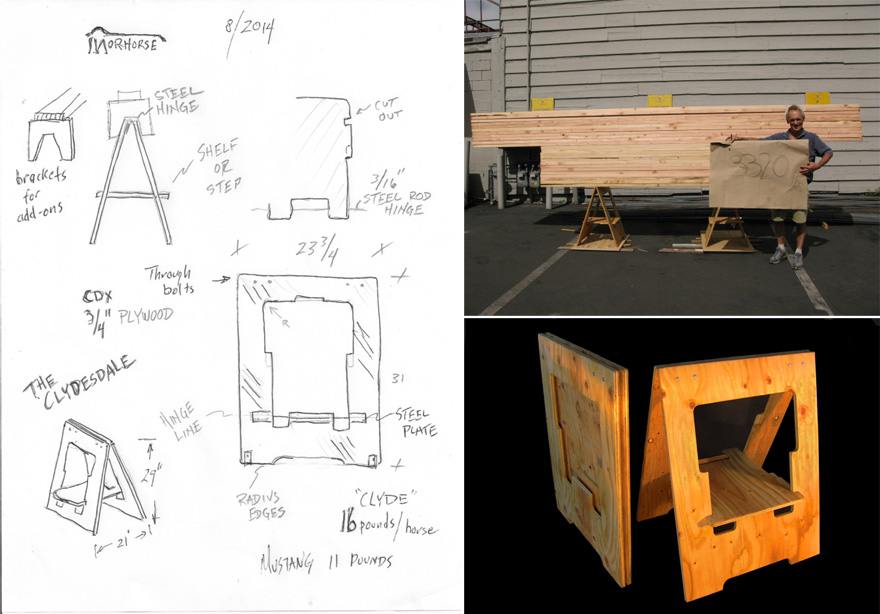 Based in Tahoe City, California, Barclay Moore has been making custom furniture in his tiny one-car garage since 1986. Working in the small space, the furniture maker relied heavily on folding sawhorses for their ease of storage and light weight. One huge drawback, however, was their lack of strength and stability—over the years, Moore amassed a pile of broken plastic versions. Last summer, he finally got fed up and decided to invent a sawhorse of his own.

"So the idea came in July, when all my plastic horses lay in ruins," Moore says. "I needed a set that was bomb-proof but that still folded." With a background in engineering, Moore took out a piece of cardboard and began sketching. "The goal was to make something that will last years, fold up, be transportable, be able to stand on it, be able to modify it and use a material that is appropriate," he says. Moore chose plywood for its stiffness, durability, weather resistance, light weight and ability to be machined using tools he already had on hand.

The result is the MORHORSE, which Moore calls a "folding sawhorse on steroids." It comes in two versions: the Clydesdale—"the mother of all horses as far as strength to weight"—and the Mustang, a slimmer and lighter design. Both are CNC-cut from 4-by-8-foot sheets of 3/4-inch CDX plywood, yielding three and six sawhorses per sheet for the Clydesdale and Mustang, respectively. To test the strength of his designs, Moore loaded two Clydesdales with 3,320 pounds of lumber, and they held up without a crack. The Mustang made it to 1,720 pounds—before Moore dropped the load from eight feet to finally break them.

Moore's Kickstarter video
"I called a friend, an entrepreneur and businessman, and he suggested trying it as a [Kickstarter] project," Moore says. "What? I had no idea what Kickstarter was." Moore's friend told him to use the crowdfunding platform to test the viability of the product, and then use the funds—if any came in—to bring it to market. It worked: as of press time, Moore has raised more than double his $5,200 goal, with six days still remaining.

For his prototypes, Moore cut each sawhorse out by hand using a router template, but he plans to fully CNC-mill them as he moves into production. "I don't want to make these things, really," he says. "Getting the parts cut that are interchangeable and accurate gets a lot of the grunt work done." After a CNC shop cuts the parts from his CAD drawing, Moore finishes the edges, cutting and drilling for the steel pivot hinge and latch cut-out. Dipping the hardware in oil, Moore then installs the hinges and brands each sawhorse with his logo.

Additionally, Moore has developed a series of add-on brackets that are made from the waste of the sawhorses, allowing for the sawhorses to be converted into tables, sacrificial saw supports, ski tuning benches, outfeed tables, work benches and more. "This is a huge benefit for the small shop—different tops for different functions," he says. Moore is also working on foot levelers and rubber feet made from repurposed mountain bike tires (mountain biking being one of Moore's other hobbies).

At 32 pounds per set, the MORHORSE is, admittedly, something of a shipping nightmare, and this is probably the most challenging aspect of Moore's Kickstarter campaign. He has already made changes to the design, such as adding a cut-out handle, rounded corners and tighter tolerances, to help reduce that weight. "But if the product is good then some are willing to pay for shipping anywhere in the country," Moore says. And for those who might not want to jump for the shipping, Moore is offering kits at lower pledge levels that will allow DIY types to build their own.

In the Details: Making a 'Folding Sawhorse on Steroids'