The modern world is pretty hell-bent on eradicating even the slightest hints of inconvenience from our lowly existence. At the slightest sign of consumer discomfort or "user friction," any number of production lines or Kickstarter campaigns can be fired up or launched to conquer the nuisances of the everyday. If there's not an app for that, then there's a product.

With a critical eye on this branch of object culture, designer Ernesto Morales and filmakers Chris Maggio and John Wilson have been exploring the phenomenon that they dub "Object Solutions," with a number of speculative designs tackling as yet unsolved problems. Simultaneously both attractive and absurd, the critical product propositions questions the consumer culture that "encourages us to match our set of everyday concerns with an equally sized set of external problem-solving tools." Instead of being given time and space to adapt to the inevitable irritations of life or tackling more serious frustrations at the source, we're offered an ever-growing array of experiential band-aids, which indeed go some way in legitimizing a broken status quo.

Interestingly, the first two Chindogu-esque concepts emerging from the Object Solutions project focus on the topic of hygiene and cleanliness in urban life—the trio presumedly finding inspiration in society's irrational preoccupation with sterilization and disinfection. The Magnifying Spoon for example is a neurotic, untrusting device used to scan for unwanted debris in food consumed out of the home—the convenience of such outsourcing of food preparation being unavoidably laced with the uncertainty of what went on in the kitchen.

The second proposal, the Full Body Moist Towel—at once ingenious and slightly disgusting—is a disturbing bath towel sized wet wipe that could actually be pretty useful in more messy dining establishments but could also, as the video above attests, find application in full body freshen-ups in busy lifestyles.

Although not realized in functioning prototype as the Magnifying Spoon and Full Body Moist Towel (perhaps for obvious reasons), the Object Solution project proposes two other clever solutions to ordinary niggles in their "laboratory." The "Lint Investment System" is a poignant tribute to the clothes gradually lost to the tumble dryer. Imagined as a retrofitted printer of sorts, the system recycles the lint collected from drying cycles and gives the user options of what item of clothing they would like to remake from the (questionable) resource. 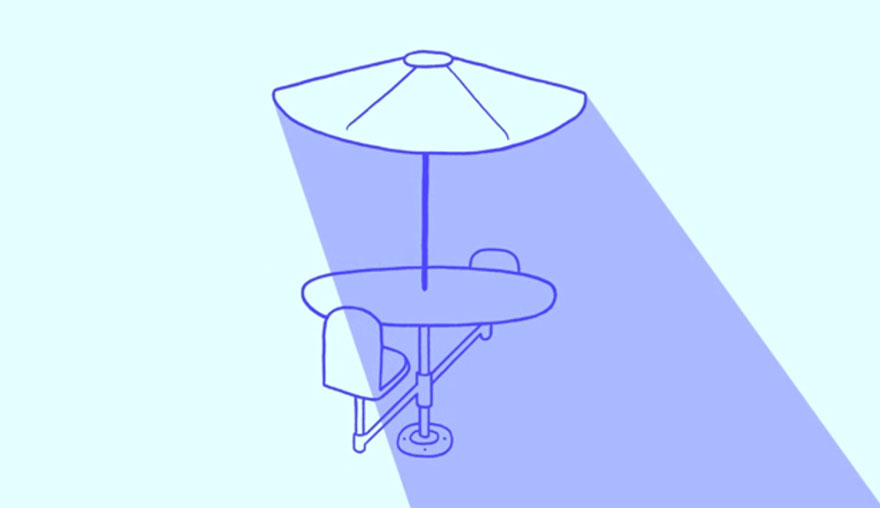 Yet more bizarre, the Rotisserie Patio Table's function is to evenly distribute sun and shade to people sitting around one parasol, with chairs spinning slowly around the table—thereby circumventing any awkward negotiations or exposure injustices.