This Week in Extending the Reach of Industrial Design: At Home in the Lab and Vice Versa with fuseproject and Quirky+GE 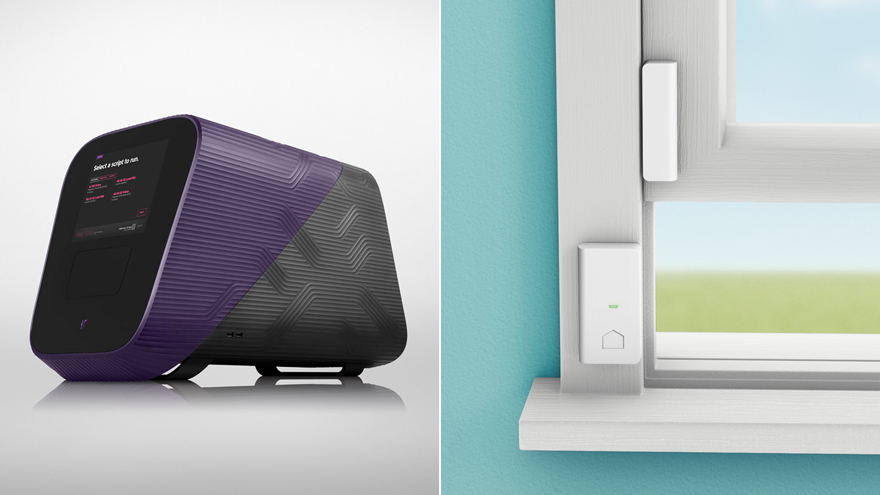 As an editor at Core77, I often find myself attempting to explain what industrial design is, and I'm sure those of you who are actually practicing designers often find yourselves in find yourselves in the same position. It's regrettable that ID is a widely unsung (if not outright overlooked) force in the world, to the effect that it falls on a precious few star designers such as Karim Rashid and Jony Ive to speak for the profession. The latter made a rare public appearance at the Design Museum this week in a conversation with museum director Deyan Sudjic, making a strong case for design-led business model (perhaps RE: suggestions to the contrary), hands-on education, and maintained that failure is part of the design process.

If Apple represents the paragon of industrial design in the post-industrial age—hardware that is as much a vessel/vehicle for digital UX (i.e. a screen) as it is a beautiful artifact—so too are we always curious to see new developments in other the frontiers of design. A colleague mentioned offhand that insofar as space exploration is constrained by the logistics of astrophysics itself, there isn't exactly a 'design angle' to the Philae lander that, um, rocketed into headlines this week. (That said, we have reported on design at NASA, where problem-solving is paramount... whether you call it design thinking or not.) 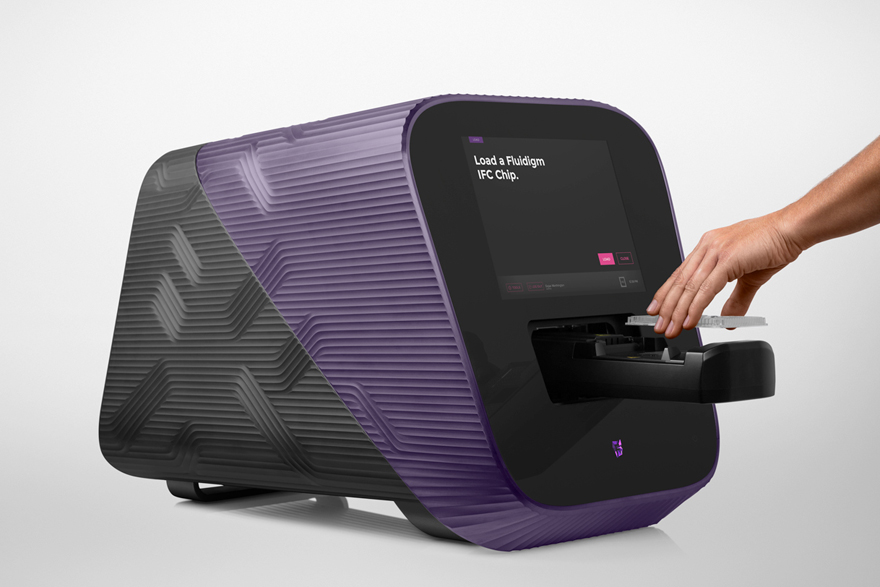 Which brings us to fuseproject's recent work for fellow SFers Fluidigm, a B2B life sciences company that called on Yves Béhar—a star designer in his own right—for a complete design overhaul in a traditionally un-(or at least under-)designed category. From the now-dynamic logo to the genre-busting form factor, the entrepreneurial design firm has risen to the challenge of expressing the genuine technological innovation behind the Juno "single-cell genomic testing machine" with equally revolutionary design.

The shape is sculptural and practical; a delicate balance between a futuristic piece of machinery and something more familiar. The aluminum enclosure is machined at high speed and the rough cuts visible and used as finished surfaces, which is a cost saving. The resultant ridges run along the exterior in a fluid, yet pronounced way, and resemble the miniature functional traces on the cell sample cartridge that enable single cell manipulations.

In some ways, fuseproject's branding and design for Fluidigm is simply another example of Béhar's ability to stay ahead of the curve. Now that the consultancy has asserted itself in consumer-facing categories from crowdfunded consumer electronics to connected horticulture, bringing a certain design sensibility to decidedly unsexy products such as deadbolts (would it be crass to call it 'jawboning?'), fuse can make forays into less accessible domains. It's a testament to the feedback loop between fuseproject's industrial design aesthetic—of which each of its products is an exemplar—and its formidable PR engine: A breakthrough in diagnostic genomics may be interesting and worthwhile in itself, but none of us would be the wiser if not for Béhar's involvement.

It's one thing to put an otherwise obscure company on the design radar, but what about reaching the proverbial huddled masses? Cupertino has had an outsize influence on the average first-world dweller's day-to-day existence precisely because they won't be developing, say, an HPLC any time soon. While the jury's still out on Apple Pay—to say nothing of the Apple Watch—the company has literally put design in the palms of users' hands. 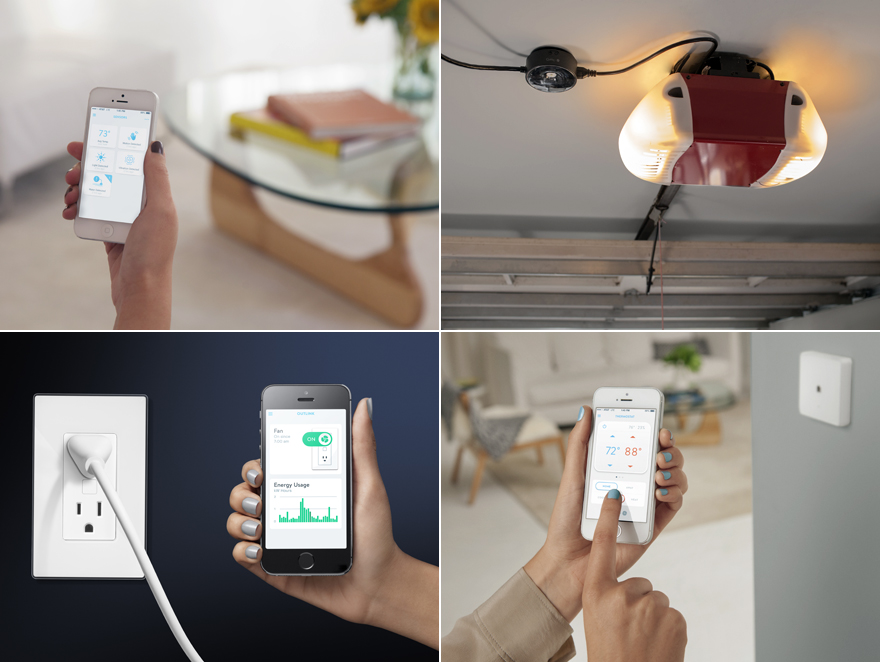 So too is Quirky subsidiary Wink forging ahead with the promise of technological seamlessness albeit on a much more modest scale. It turns out that its nation-wide retail initiative—I duly noted the endcap display at my local Home Depot last weekend—might be construed as testing just one body of water where Quirky hopes to swim. The New York-based startup announced its blockbuster partnership with GE last April and together they have since launched a smart bulb and the Aros air conditioner; this Tuesday saw the debut of a new collection of co-branded products. To mix the metaphor, Quirky+GE is hoping that consumers will bite on their suite of seven retrofittable products from switches to sensors, priced at $35 to $100. The Connected Home collection comprises Tripper, a door/window sensor; Overflow, for water leakage; Outlink, a smart wall outlet for monitoring power usage; a smart switch in Tapt; the Ascend connected garage-door opener; the Norm thermostat; and the Spotter UNIQ multipurpose sensor.

In keeping with Quirky's business model, all of the gadgets are credited to an inventor and were designed by the company's in-house team. (It's also worth noting that Quirky+GE are competing not only on price—at $80, Norm is less than a third of the price of the Nest—and performance but also as a kind of ecosystem: All of the products except for the Ascend require a Wink Hub or the more fully featured Relay to connect each device with the app.)

Quirky's bottom-up, if-you-build-it crowdsourcing might be contrasted with fuseproject's top-down approach, but, insofar as each product is meant to serve a specific user—biologists and early adopters, respectively—these efforts represent a single underlying philosophy. Considering that fuseproject's work on the Juno has been likened to "[creating] the same type of delight and ease that, say, Nest thermostat or iPhone users feel when using those products," the fact remains that the user knows best. 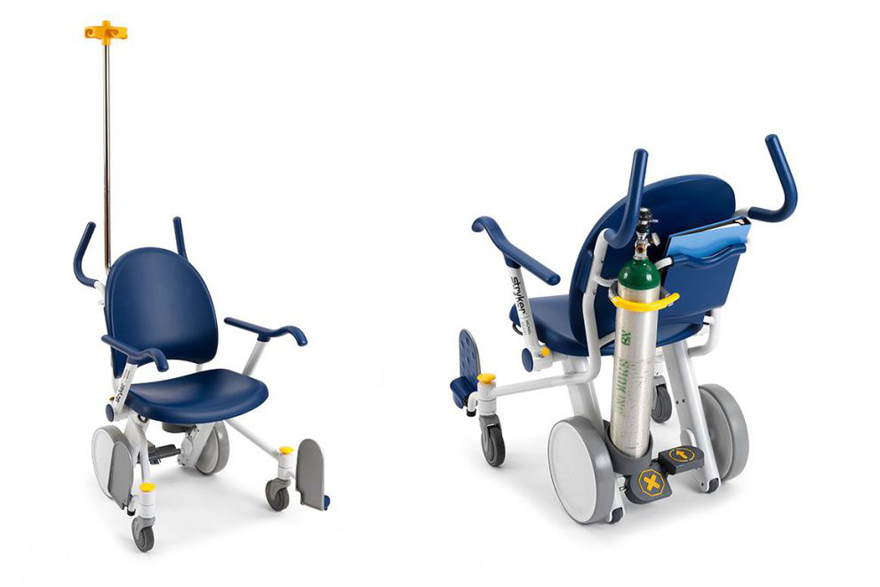 The Stryker Prime Transport Chair, "the Ferrari of Wheelchairs," by Michael Graves

Case in point: When I ended up in an emergency room this past summer, the triage nurse was so excited to use a brand new wheelchair that she insisted that I sit in it (even though I was able to walk). I realized as much when she handed me off to an X-Ray tech, who remarked that it was the first time she had seen the chair and deemed it to be "the Ferrari of wheelchairs" (I kid you not). I later learned that the Transport Chair (unlike a wheelchair, these cannot be wheeled without assistance) was designed by none other than Michael Graves. It was an uncanny instance of how design reaches the real world: For the hospital staff, it came in the form of the Stryker Prime TC.

Sometimes it's not worth trying to explain what design is—it just has to work. The question is whether it stands the test of time, once the novelty subsides.

This Week in Extending the Reach of Industrial Design: At Home in the Lab and Vice Versa with fuseproject and Quirky+GE