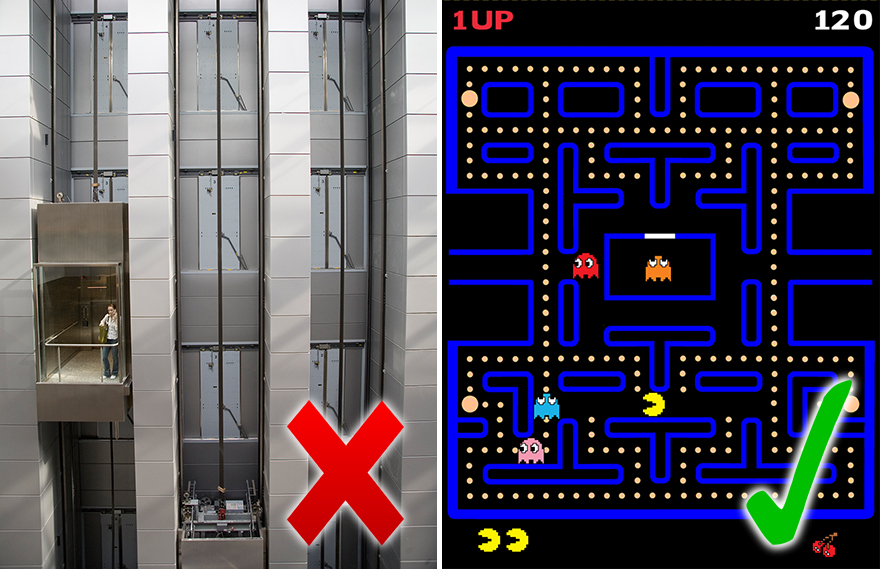 The brilliance of the paternoster system shown below is that it's always moving, conveyor-belt-style. Assuming a manageable flow of bodies, the "feed rate" could be continuous.

The modus operandi of a paternoster points to a very basic limitation with elevators that most people don't consider: With the latter, you can only fit one car per "line." Which is to say, you can't have cars stacked one on top of the other. And this, reckons German conglomerate ThyssenKrupp, is ridiculous. "The present use of one cabin per elevator shaft," the company writes, "[is like] using an entire railway line between two cites to operate a single train—clearly a waste of resources."Thus the company has developed Multi, a cable-less, self-propelled elevator car that rides along a track. With the Multi system, multiple cars could be placed inside a single shaft. While the speed of one car would still be dictated by the car ahead of it—let's say you're traveling from the lobby to the 28th floor, but the car ahead of you has to stop at 14, 15 and 21, you're still gonna wait—but the company figures increasing the overall capacity in each shaft will result in net productivity gains. 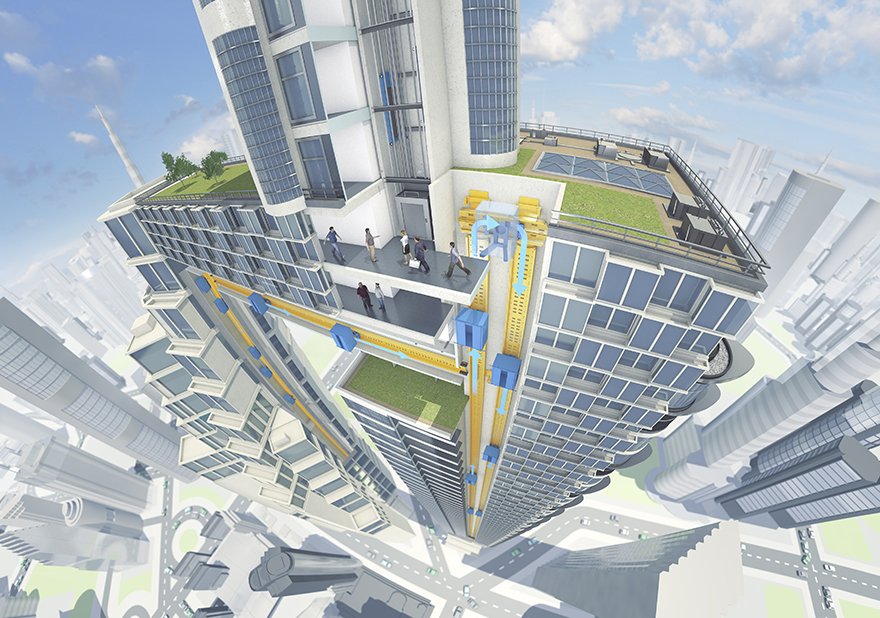 The part that the blogosphere seems most excited by is that, being freed of ropes and gravity, a Multi elevator could travel sideways, provided a horizontal track and shaft were in place. Now as someone who used to work in a midtown high-rise, I actually welcomed the few times a week I had to walk across the floor to the other side of the building, as it was often the only "exercise" I got; the killer app of a horizontally-capable elevator is not to ferry lazy people from the east side of the 16th floor to the west side. The benefit is that cars can now travel in a loop, like a subway system, which further increases efficiency. And in an extreme case, a number of horizontal and vertical tracks could provide mobility similar to what the characters in Pac-Man enjoy.

While retrofitting a horizontally-capable Multi system to an existing building would likely be too expensive, ThyssenKrupp is hoping the innovation will have a role in future construction, and perhaps even rewrite a fundamental law of architecture. "Building design will no longer be limited by the height or vertical alignment of elevator shafts," the company states, "opening possibilities to architects and building developers they have never imagined possible."

It will be some time yet before Multi will be integrated into a real-world building, with much testing required beforehand. To that end, ThyssenKrupp aims to begin trials in 2016, at a purpose-built facility located in Rottweil, Germany.