In the Details: Foam and Marble, Together at Last? 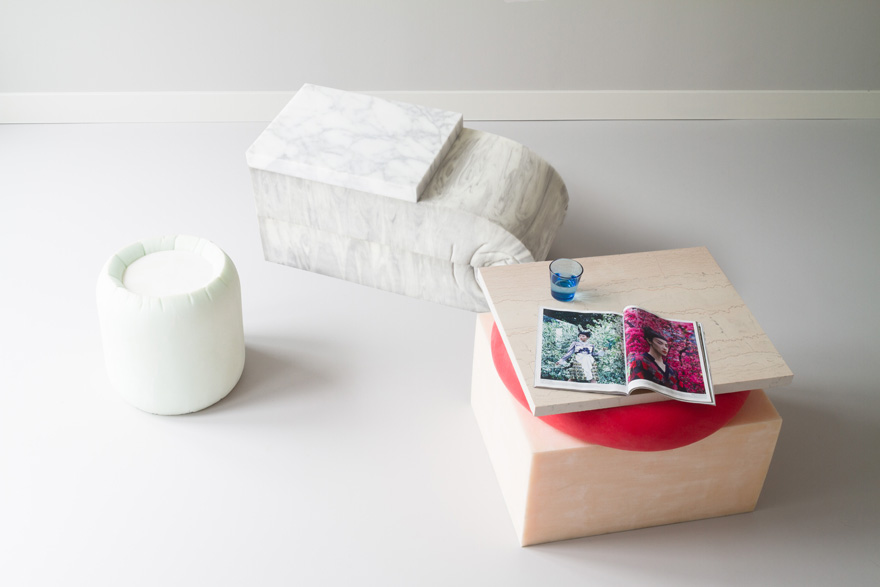 When choosing materials for a side table, squishy and compressible polyether foam might not be at the top of your list. The porous material is fantastic for packaging fragile goods and for use as a tolerable mattress pad, but as a side table meant to support other objects—particularly a slab of marble? Not so much. Yet it's exactly those features that led Dutch designer Pieteke Korte to use the material for a series of side tables appropriately dubbed Stone & Foam.

A recent graduate of the Man and Identity program at Design Academy Eindhoven, Korte developed the Stone & Foam series during one of her studio courses. The brief, titled "Carry," tasked students with capturing the expression of weight in a design. Korte had focused on textiles, materials and art direction during her time at school, so she naturally began with material research and experimentation, playing with structure, weights and color. She didn't get very far into testing foam samples before stumbling upon the magical pairing of stone and foam, quickly moving to scale models and full-scale prototypes. "The foam and the stone create a really nice dialectic—soft and hard, light and heavy, cheap and upscale," Korte says. "It just made sense. I know it sounds like the idea was there from the beginning, but it took a while to get there."

Full-scale prototypes were where Korte ran into the most trouble. "There were plenty of failures after moving to full scale—split blocks of foam, wasted resins and urethane," she says. "There isn't a lot of information out there on the particular properties of foam." At full scale, Korte found that the foam was put under more stress, changing its degree of flexibility compared to her smaller mockups. This was particularly problematic with her folded table, which required that Korte find a more ductile foam for the full-scale version. The designer also explored working with resin and urethane as a way of sealing the foam and securing its shape, but was disappointed with the results. "It yellowed, it couldn't be used to create the kind of membranes I wanted," she says. "It was a week of experimentation that I quickly learned wasn't worth continuing." 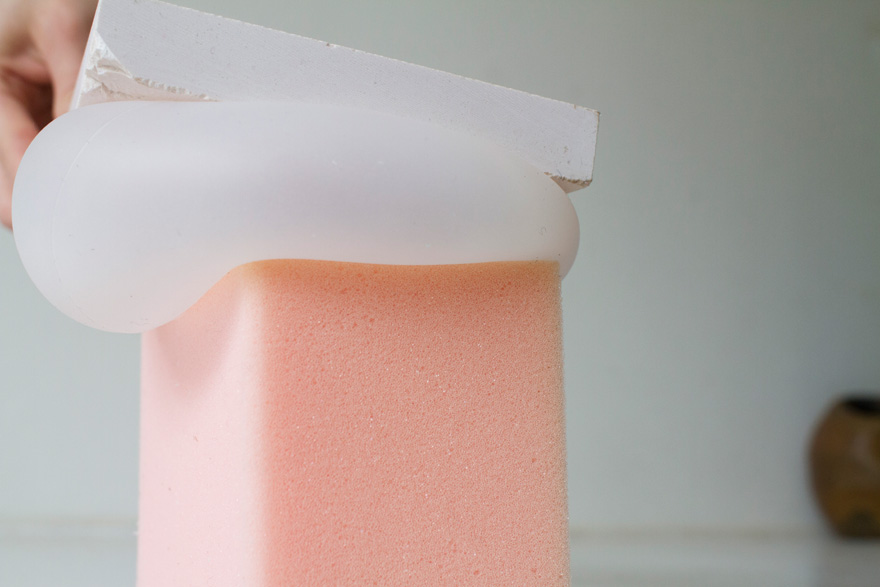 Foam and marble, plus trial and error 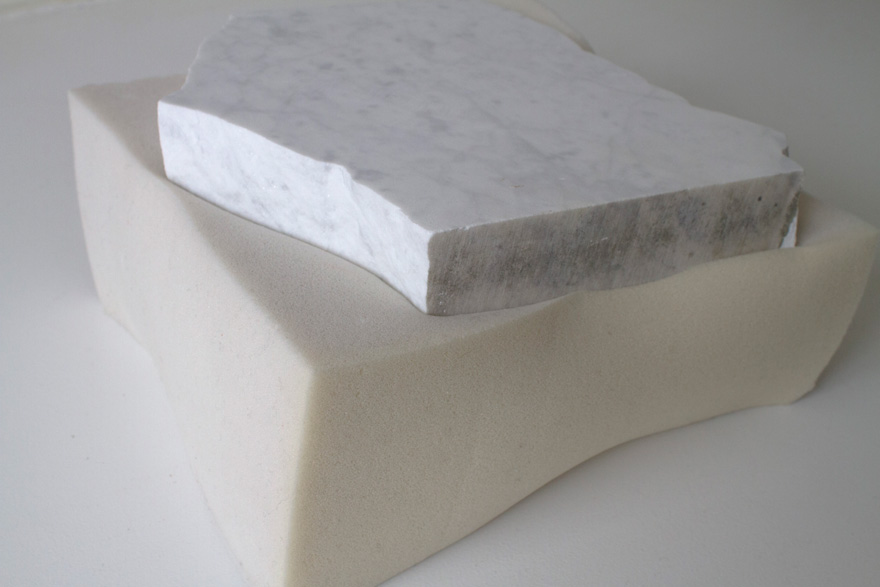 Working almost exclusively with a foam warehouse in Brabant—the nearest one to her workplace in Eindhoven—Korte struggled with finding the right language to communicate exactly what she was looking for in the way of materials. Fortunately, the warehouse had "mountains" of scrap foam she could buy for cheap, giving her plenty of material to toy with. For marble, Korte used another local supplier, picking up slabs from a nearby manufacturer.

Conversations with suppliers around the durability and tactility of the materials guided some of Korte's selections, but combing through scrap-foam mountains and marble stacks led the designer to many different types that she didn't know the specifications for. "A lot of the testing was done with what I could get my hands on," she says. "There was a point in the project where the living room was overtaken by stacks of pastel foams and the couch had stacks of marble on it."

Ultimately, Korte used two types of foam for the final designs, naturalis koudschuim and polyeterschuim—Dutch terms for natural and polyether foam. For the round table, she chose Marquina marble, and for the folded one, a Verde Pinte marble. "And then, for the pink, I have no idea," she says. "I just pointed." 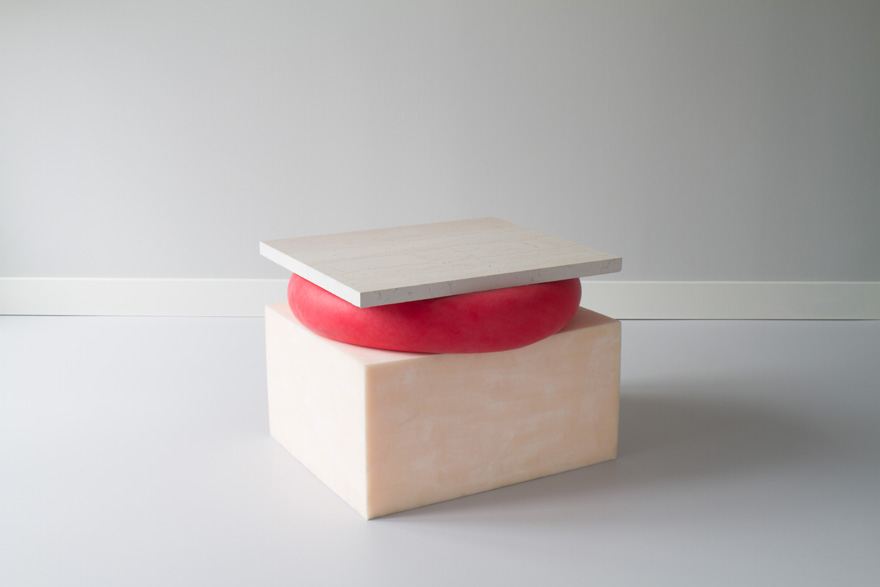 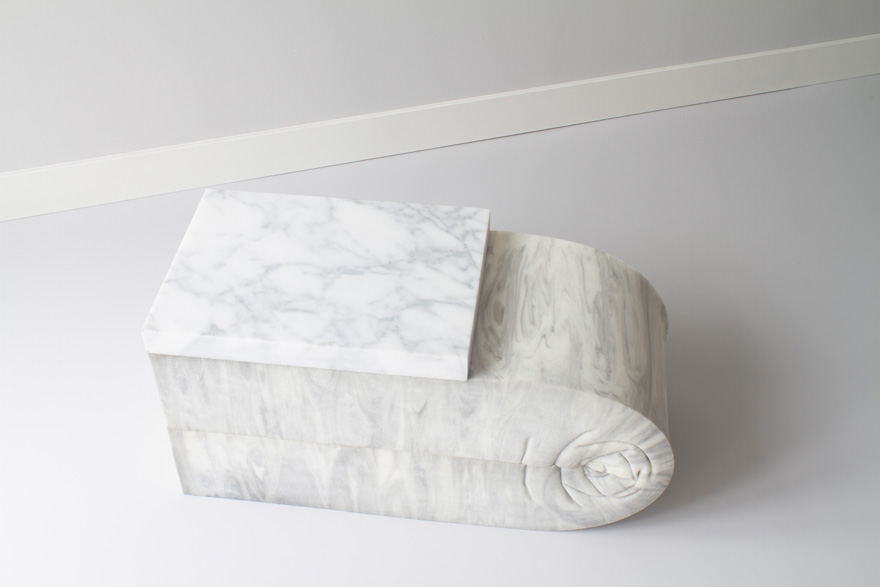 As for building out the tables themselves, Korte says the process was quite straightforward: "It's super simple. Take marble, put on foam. The weight does the work." That's not to say that some testing wasn't required. "Naturally, the final pieces all had to go through the trial and error of finding just the right proportions and scale," Korte says, "but this is really just a matter of iteration—and, to be honest, is an ongoing process."

The iteration process was analog-only; Korte avoided digital modeling or rendering programs, relying entirely on observation and touch to arrive at her final designs. "These are intuitive decisions—there isn't a unifying theory behind choosing proportions," she says. "You sketch, you cut, you send to the supplier and if it comes back too big or too small, you adjust."

The final series of tables have an almost cartoonish look and feel, with colorful figurative foam bases squished and accented by thick slabs of heavy white marble. Korte is still working out the next steps for the collection, but she envisions the stone-and-foam tables eventually finding their way into spacious homes, hotel lobbies and reception rooms.

In the Details: Foam and Marble, Together at Last?