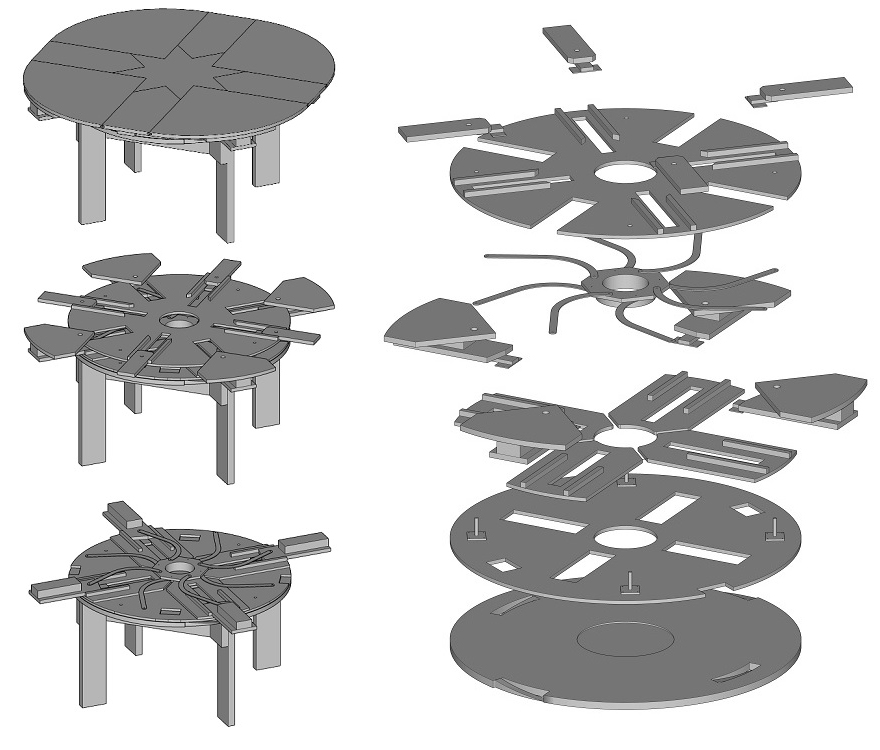 The Fletcher Capstan table, like the Jupe table before it, has undoubtedly been copied in garages and workshops around the world. And while it's unlikely that anyone can duplicate David Fletcher's fastidious and multimaterial construction, some enjoy the challenge of DIY'ing something similar that's more within reach.

Contractor Scott Rumschlag falls into this category, and has put more than 400 hours over a couple of years attempting to produce a self-built version of the Fletcher Capstan, complete with star-shaped center and multi-level leaves. Here's what Rumschlag had come up with by February of last year:

While he was not able to duplicate the always-round design of the Fletcher Capstan, here's the version he posted a video of last week, where he explains the mechanicals he devised to achieve Fletcher-like results:

Now, here's the thing. Rumschlag is selling plans for US $29 for how to construct his version. On the FAQ section of his website, we found this:

It was, the original expanding table idea by Robert Jupe in 1835 and the modern self storing iteration by David Fletcher in 2002, #GB2396552. The 2002 patent was filed in Great Britain and expired 5 years later in 2007 due to "non-payment of renewal fee."

This presumably paves the way for Rumschlag, legally speaking, to sell his take on Fletcher's design.

Now I doubt that Rumschlag's $29 plans are going to take a bite out of the customer base for Fletcher's six-figure product; indeed it's possible Fletcher never renewed the patent because he figured his product was too complex to knock off, at least faithfully.

But I wanted to ask—where do you guys stand on this sort of thing? Rumschlag has put a lot of time into his plans and obviously wants to recoup some of that, and it appears that he's legally in the clear; so my question is, how would you feel about this if you were Fletcher looking at Rumschlag? Bear in mind that Fletcher has been working on and tweaking the current design from 1997 right up until today—that's nearly twenty years of labor.

And going back further, how would you feel if you were Jupe, looking at Fletcher's work? In my mind, Fletcher made some clear design improvements to Jupe's work, and it seemed to me that his version could stand up on its own merits while acknowledging the obvious debt to Jupe.

On the one hand, it can be said that the work of all craftspeople is built on the work of the craftspeople that came before them; that's how we improve as a species. In the name of undertaking DIY design and engineering challenges, I myself am not above attempting to duplicate someone else's work, in the privacy of my own shop, for the sake of edification.

On the other hand, I think it's the idea of then selling plans to that work that has me raising an eyebrow.