Hanger Design, Beyond the Basics 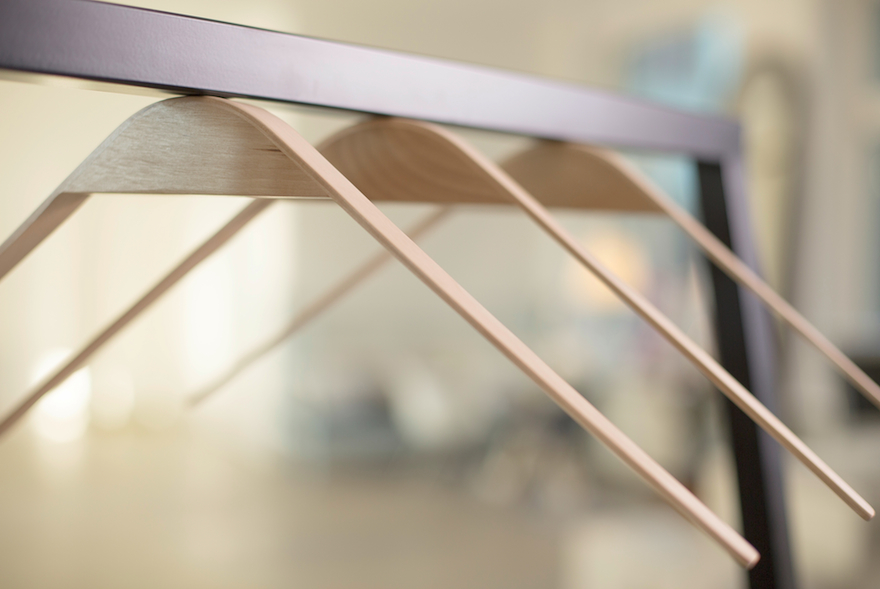 Having the right hangers is critical for ensuring well-maintained clothes. In most cases, normal good-quality wood or plastic hangers will work fine—but sometimes a different type of hanger can be useful.

The Cliq hangers from Flow Design have no hooks; they attach to any metallic tube or surface with magnets. For users who are tight on vertical space (and willing to add a metallic surface if one isn't already in place), these could help; they save about 6 cm of space. They might also be easier than normal hangers for some users to handle, since there's no manipulating of a hook over a bar.

The blow-molded polypropylene Hercules coat hanger from Magis, designed by Marc Newson, has a shorter hook than many hangers, which can also be a bit of a space saver. However, the opening on some of these short-neck hangers is smaller than on more traditional hangers, which can make it a tight fit on some rods. 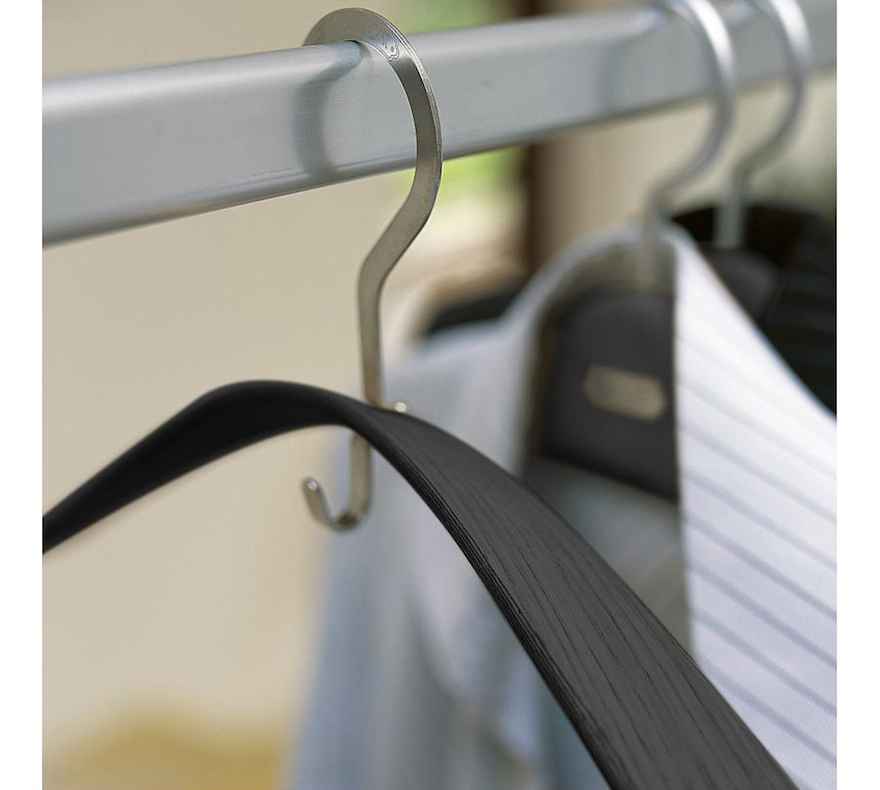 The Skagerak Pilot coat hangers designed by Nina Tolstrup are gorgeous, and have a nice hook for hanging a scarf or a bag. 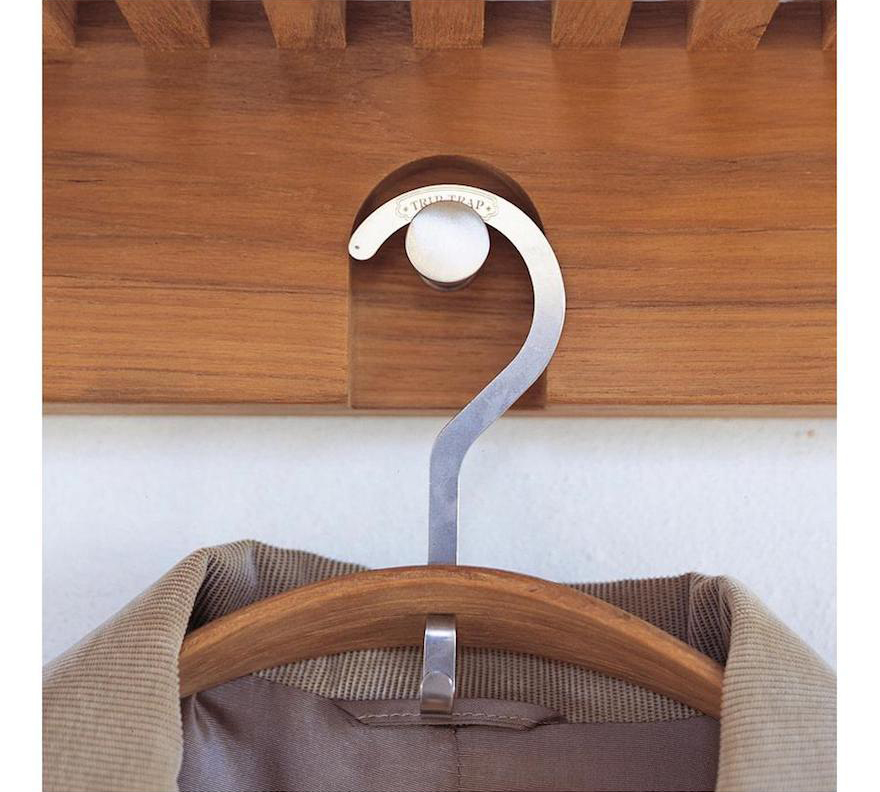 More expensive hangers such as the Hercules hanger and the Pilot hanger might be nice when the hangers are out in the open, making them part of the decor rather than burying them in a closet. Another rationale for such hangers: people are more likely to use products that they love, so eye-catching hangers might help avoid clothes being thrown over a chair.

The Monkey Hangers from M-Design, which can bend without breaking, are one of a number of designs intended to avoid misshapen shoulders. They'd also be good for those who are tough on their products and tend to wind up with twisted or broken hangers. 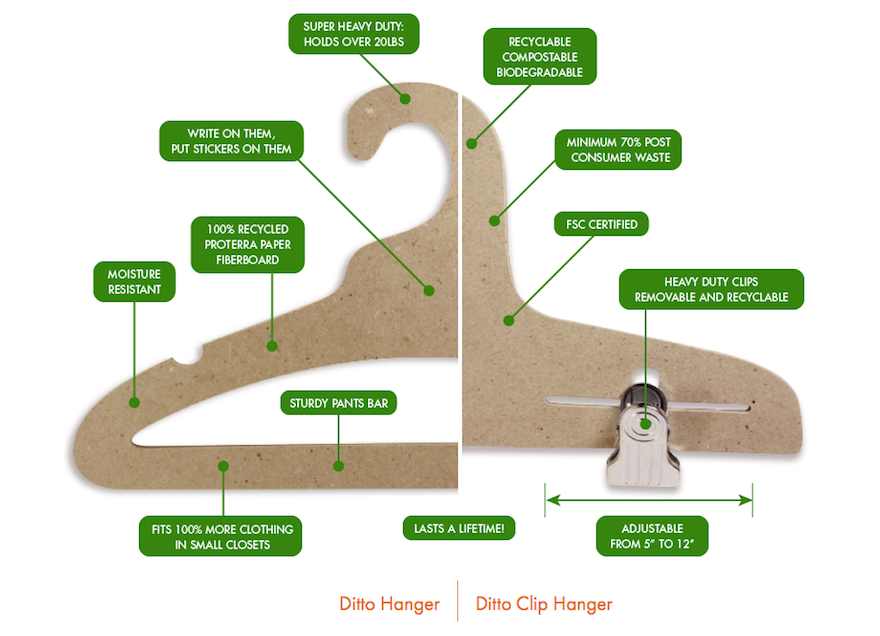 Ditto Hangers are made from recycled content, FSC-certified, K2 paper fiberboard. Because of the non-toxic materials used, there's no off-gassing, which matters to chemically sensitive users. The Ditto hangers are thinner than many other hangers, which saves vertical space, but also means they lack the shaping that something like a wooden hanger can provide. But that's a trade-off that will certainly make sense for some. They come in both adult and child sizes. 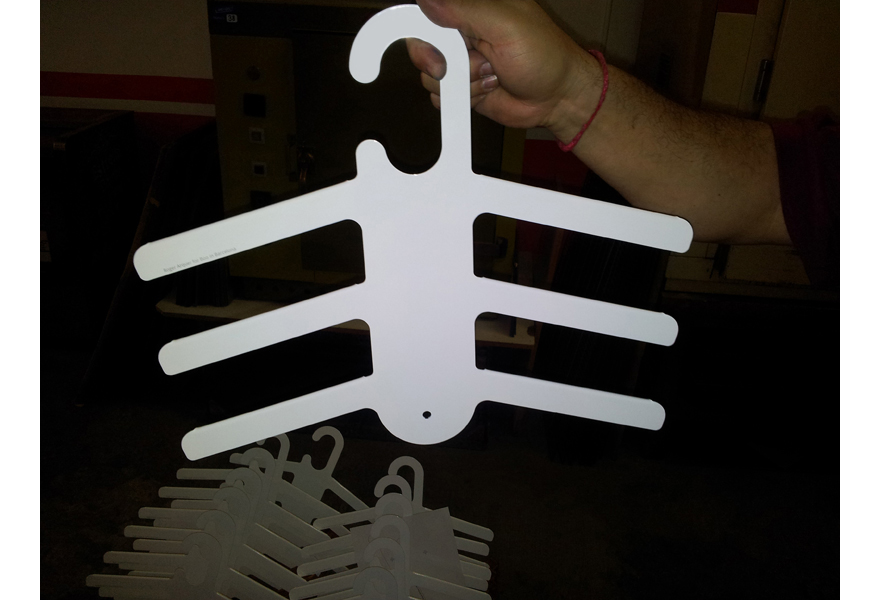 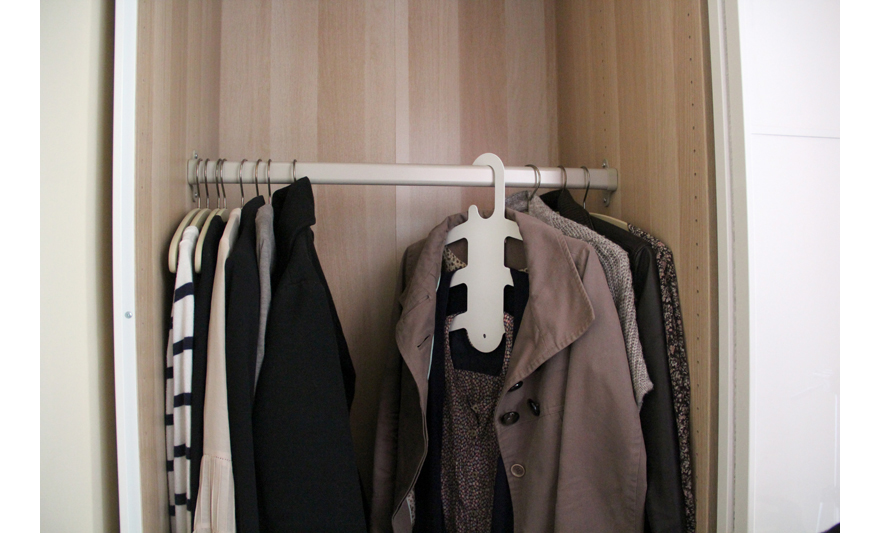 Hangers that allow users to put more than one garment on a single hanger save space, but are also harder to use—another trade-off. The Skeleton hanger from Roger Arquer Studio seems better designed than most; it doesn't try to fit too many things on a single hanger and the spacing is good. It's made of powder-coated steel, so it's sturdier than many others I've seen. 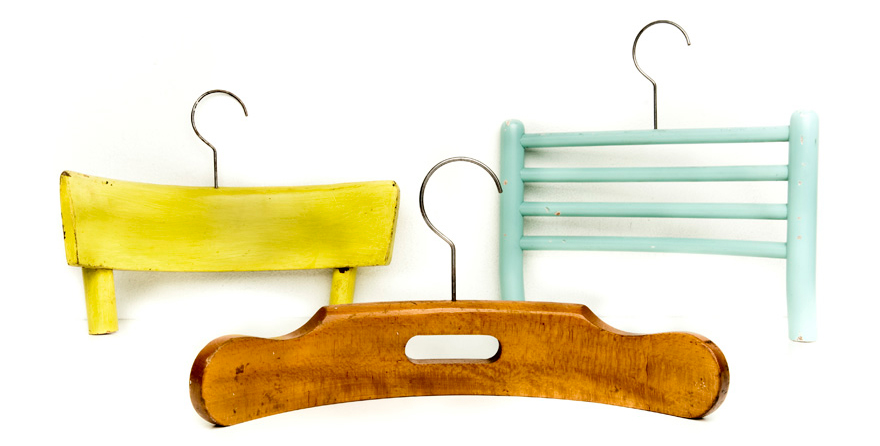 The Abitudini hangers from Resign, designed by Antonello Fusè, are made from the backs of broken chairs. It's an interesting idea from a re-use standpoint, but the resulting hangers aren't especially well-shaped for clothes, and will take up a lot of closet space. They're not going to work for most users. 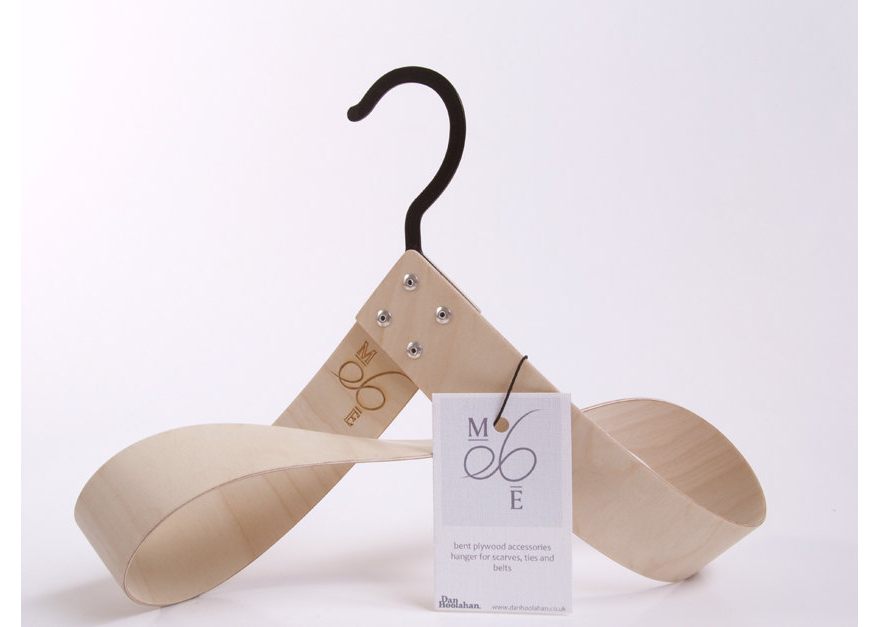 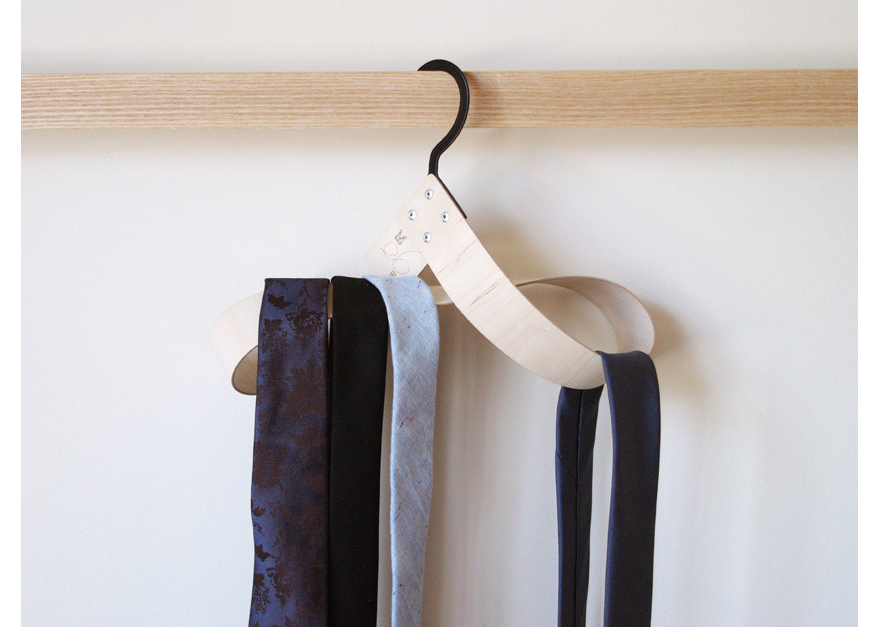 Designers have also done some creative things with accessory hangers. This one is the Mobe from Dan Hoolahan, made from bent plywood. It's going to take up a bit of closet space—but again, if the great design means it actually gets used, the space could be well worth it. It's another one I can see being out on display, perhaps hanging from a hook, rather than being hidden away in a closet. 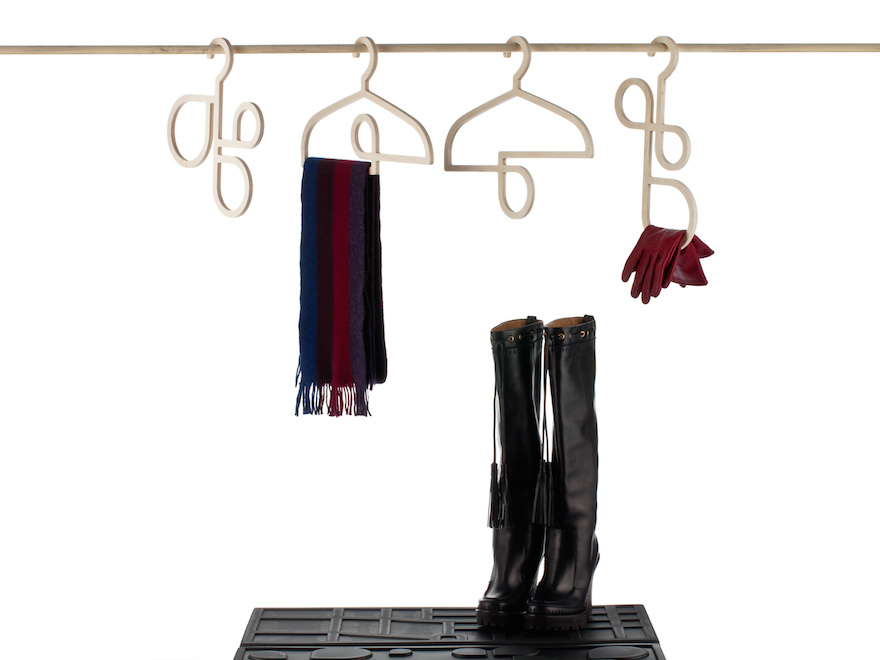 TOMA has accessory hangers along with normal coat hangers that have an accessory loop. They're made from lightweight Russian cherry plywood. Being more compact than the Mobe, they would be more suited to a small closet than the Mobe would.

Hanger Design, Beyond the Basics