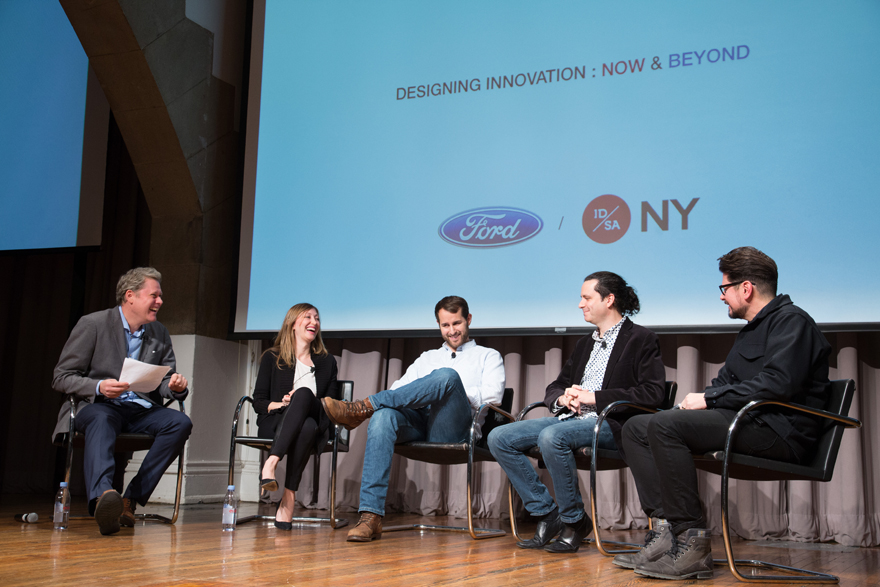 On December 10th, we braved some less than appealing weather to gather at the historical Cooper Union for an exploration of design progress and innovation. This was the fourth edition of the Designing Innovation series presented by Ford and IDSA NY and the conversation did not disappoint. The four panelists discussed fortifying customers' relationships with brands through innovative design, as well as broader ideas like what it means to be a pioneer, accountability in design and providing an 'opt-out' to innovations. As we approach what appears to be a tipping point across many technologies and experiences that have remained stable for decades, the panelists discussed the responsibilities designers have to both shepherd progress and keep the end users in mind at the same time. If you missed the presentation, here's a summary of what Ingrid Fetell, Design Director at IDEO; Steve Schlafman, Principal at RRE Venures; our very own Allan Chochinov, Chair of MFA Products of Design at SVA; and Craig Metros, Exterior Design Director of the Americas at Ford Motor Company had to say.

On Being a Pioneer

Moderator Rama Chorpash, Director of MFA Industrial Design, Parsons the New School for Design, kicked off the night by diving right into the question, "What does it mean to be a pioneer?" Allan offered a quick definition that included the qualifiers "risk-taker", "optimist", and "voracious curiosity", while rejecting the commonly held notions that it's impossible to be dedicated to any passion while maintaining a career and family at the same time. Craig pointed back in time to when Henry Ford's visions of vertical assembly in the 1920's led most to think he had a few screws loose, so perhaps suggesting the unbelievable is a prerequisite for being a pioneer. He credits that assembly line concept innovation with being a source of inspiration; something he admires for the impact it's had, not just on the automotive industry, but on the manufacturing of products in general. 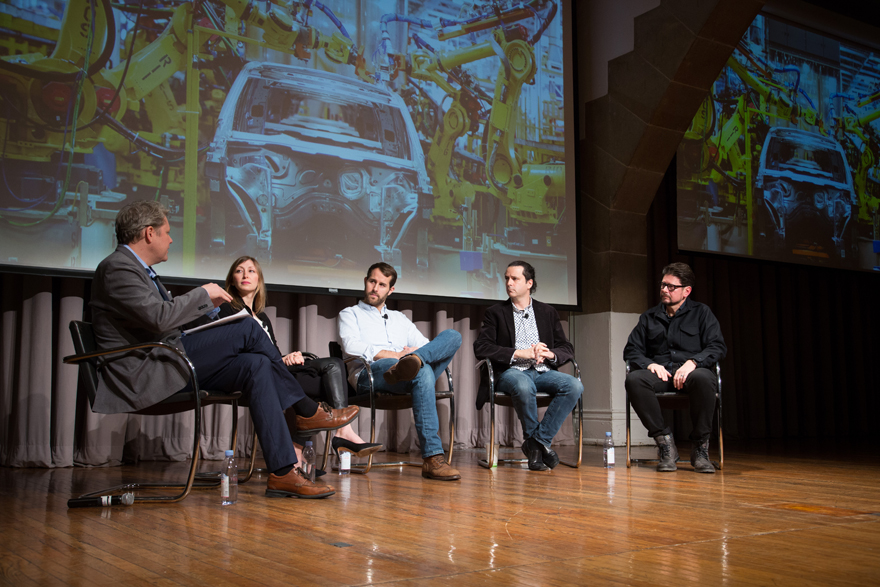 The images projected on stage showed the dramatic contrast between a car assembly line from the 1920's and one today, the latter being completely void of any human presence. Rama used these images to point out that the turn of the 20th century ushered in focuses on both transportation and labor in the United States, which led to dramatic innovations of the assembly line process. Craig explains that automation has made production not just more precise and faster, but also safer by removing people from environments like the welding pit.

Rama then turned his attention to Steve Schlafman who suggested we are on the cusp of incredible things happening as innovations shake up industries and products that haven't changed significantly in decades. He believes companies ilke Uber, Tesla and Google are on the verge of making fundamental changes to the humble car in the next 20 years. He also sees this type of upheaval happening in the service industries where Managed by Q is taking the task of maintaining an office space to a new level with their software enabled management system. Steve pointed out that Managed by Q is accomplishing this wonderful innovation while adhering to fair labor practices, which led the conversation to the presence of accountability in companies that grow too big, too fast. The element of trust is vital in these innovative spaces where open systems like Uber and Craigslist enable wonderful advances but also present risks to the consumer. 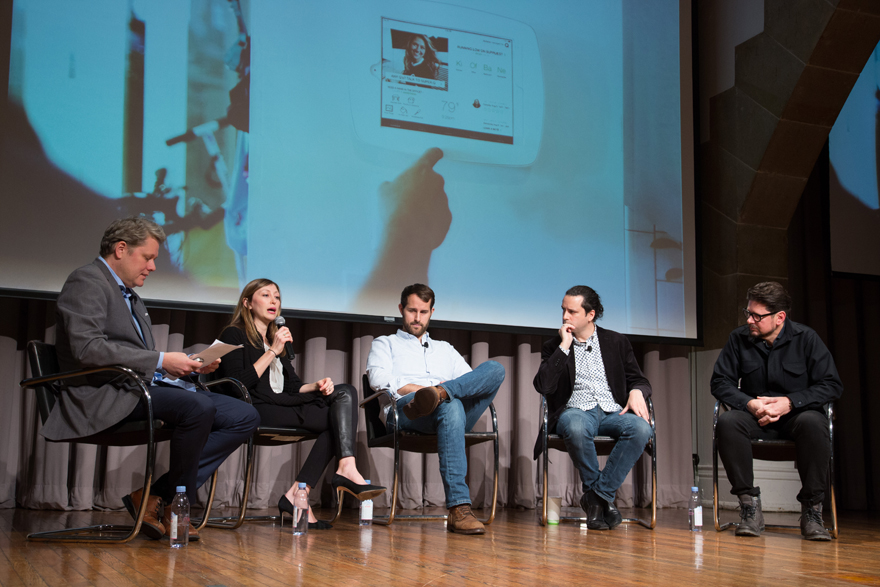 Ingrid Fetell was given the mic to talk about the distrust surrounding the way companies like Uber and Facebook use their customer's data, but pointed to the Magic Band from Disney as an example of productive, even playful, uses of consumer data. The RFID enabled band acts as a key, a credit card and an access pass for different parts of the park, which leads to a more delightful experience for the Disney visitor, such as a "surprise" visit and happy birthday wish from your child's favorite Disney character on your child's birthday. Ingrid says that Disney has figured out a way to bring back Santa with these serendipitous experiences, and effectively demonstrate how a new relationship of trust can be built by using data.

Steve followed up with a prediction that in the next three to five years, this type of "contextual computing", as he called it, will become common place. He sees many companies right now developing ecosystems built on beacons that will enable the sending of personalized and hyper local contextualized messages, all thanks to apps on the phones in our pockets that are always on. This type of tracking, as Rama mentions, was not socially acceptable pre-September 11th, but today, many companies can leverage this technology to reach consumers because so many of us opt in to being tracked. 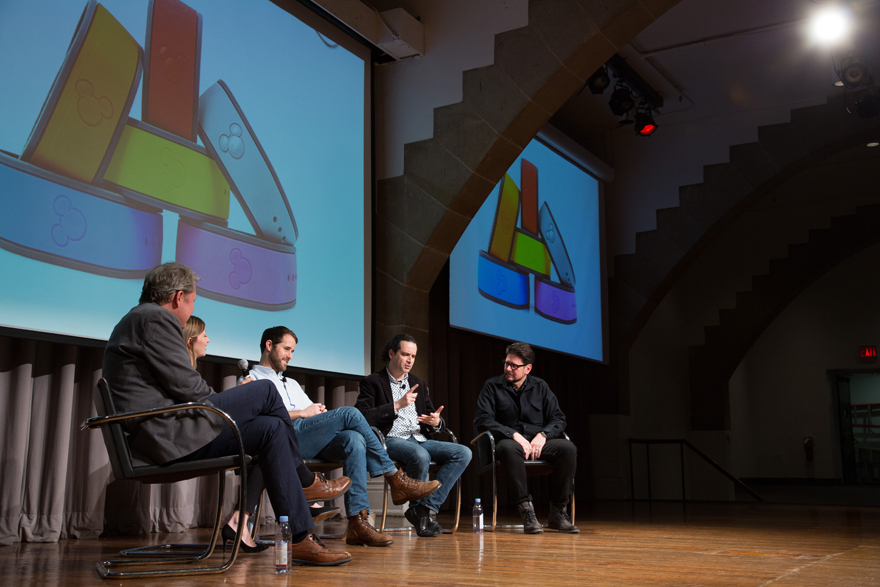 But is all this a good thing? Are we better off just swiping our wrists and gaining these experiences? Allan counters that this type of disintermediation is leading us to a homogenized life where interactions are rare and we (thankfully?) never have to speak to a barista at Starbucks ever again or suffer the misspelling of our names on our lattes (see "Mark with a C"). He suggests that designers should be adding friction to the world and that "this obsession with making things easier and more convenient is killing us."

On Opting In and Out

As we examine these design led innovations, it's important to keep in mind whether or not consumers want these new experiences. Rama makes the very valid point that this beacon technology was originally developed to track prisoners and is now used and asked the panel how designers should incorporate affordances to opt out of these technologies. Allan suggests that the acceleration we are seeing in these technologies is fundamentally unstoppable, especially because the new design material is information. As designers make things better and better and better, it becomes more important to consider the consequences.

Is it possible for research to assist in this process? Ingrid doesn't believe that research can inform us fully about all the consequences before we introduce a new product to market. Ethical instinct and intuition are vital in the prototyping and development process, she says, as is asking the question, "Will this make the world more like a world you want to live in, or less?" She and Allan agree on the reality of large companies gathering data constantly and assigning armies of people to engineer barriers to opting out. It doesn't help, as Allan points out, that designers make things irresistible, making it more difficult to "want" to opt out. Ingrid believes it is ultimately the designers responsibility to keep people in mind until the new data space is properly regulated.

Designers and the companies relying on them to drive customer experiences forward are responsible for much more than a new and exciting product or brand interaction. They are accountable to take risks that lead to improvements with the greatest amount of good in mind, all while taking the unforeseeable future into account. This is why Craig and his team project out 20 years for projects they work on today. Watch the full video here to see the rest of the conversation: