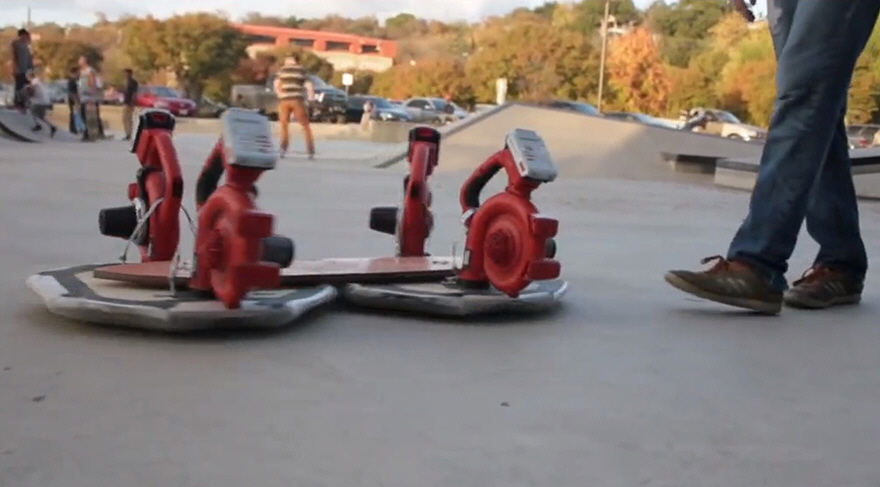 Years ago William J. Beaty released a paper called "Ultra-Simple Hovercraft: A DIY Science Fair Project." In it Beaty, a research engineer at the University of Washington, laid out the plans for building a three- or four-foot wide hovercraft made out of a plywood disc and a battery-powered leaf blower.

That was in 1997, so there wasn't exactly any YouTube video of Beaty's concept in action. But earlier this year, the EdVenture Children's Museum in South Carolina took the idea and ran with it. Here's what they came up with:

It works! And EdVenture, it turns out, wasn't the first to realize Beaty's concept. In 2011 Torben Ruddock from Engineering.com built this model, with decidedly better seating:

Now, remember the hoverboard hoax a lot of people were taken in by earlier this year? After seeing both the hoax and EdVenture's Instructable, Texas-based Ryan Craven figured he'd see if he could put the two together. Starting in March, shortly after the hoax video surfaced, and working through the year, this is what Craven's come up with as of this month:

Obviously the man's got some ergonomic kinks to work out—the placement of the blowers interferes with the "propulsion," meaning his pushing leg—but it's a start. And there's also that persistent rubber-grinding noise, which sounds to me like air bleating out of the holes in the cushion, at different rates as the rider's weight isn't distributed perfectly across the surface. So I guess it's like William Gibson said: "The future is already here, it's just not evenly distributed."