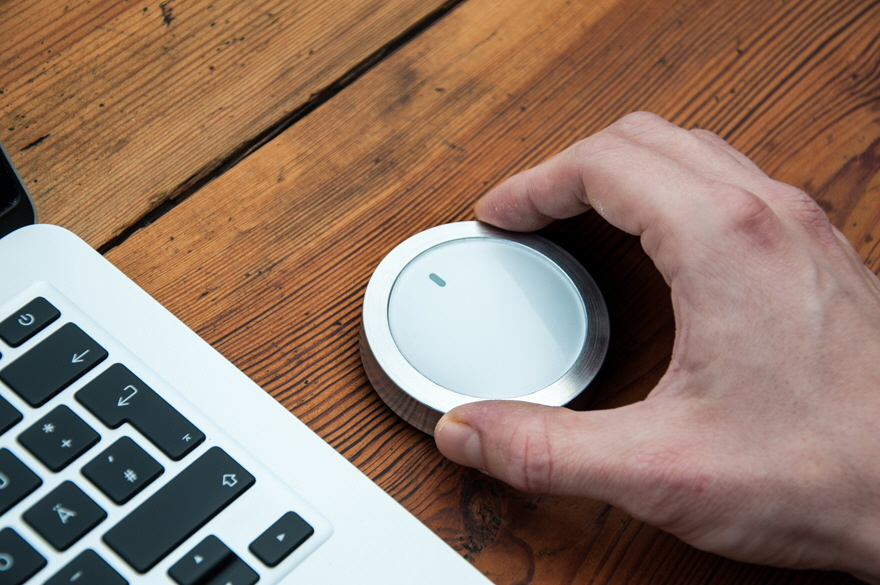 Chances are if you're a designer, artist, musician or use a computer daily, you have encountered that fateful moment when your mouse keeps you from making that perfect color selection or nudging a layer into exact position with Photoshop. While most computer aided drawing and modeling programs account for clumsy hardware (thanks magnetic lasso), isn't it about time we demanded better hardware? The fact is—from fancy Wacom tablets to every incarnation of touch screen and foldable keyboards—UI tools still fall into the uninspired categories of keyboard, tablet and mouse.

Recently however, the Y Combinator alumni and Berlin-based startup Senic has tackled this exact issue of high precision interface with their wireless device aptly named 'Flow.' The freely programmable controller is not only compatible with most computer based applications but also has potential integrations for connected home objects and even Internet enabled microprocessors.

The sleek aluminum, stainless steal and polycarbonate casing pays not-to-subtle homage to Dieter Rams-ian simplicity. At just under 2.75 inches, Flow boasts 360 degree angular positioning, capacitive touch and infrared-based hand gesture recognition. Additionally, with 3,600 values in just one rotation of Flow, exact manipulation of brush sizes, color selection and anything else is right at your fingertips.

The four co-founders represent a broad skill set and media prowess enviable to most start-ups launching a crowdfunding campaign. We caught up with CEO Tobias Eichenwald to discuss the campaign, the frustration that gave birth to Flow and the future of UI.

C77: How did Senic start? What first put you on the path to designing a tool like Flow?

Tobias Eichenwald: We're three friends and co-founders from Germany and we use digital tools like Photoshop, Illustrator, Premiere, Rhino or Eagle on a daily basis. We need to be fast and we need to be good at what we do. Browsing through menus and pulling a fake slider with a mouse didn't feel that way. Existing interfaces don't give us the pixel-precision we need; they are time consuming and interrupt our workflow.

We found similar problems in other fields like controlling our connected devices for example. We grew up with the assumption that you turn on a light by hitting a big white button on the wall without thinking about it. Now that smart devices are replacing traditional devices and the market for connected homes is exploding, we are expected to browse through apps and spend time waiting in a hallway, just to turn on a light. Flow became your response to this problem?

It became apparent that we needed a better tool, a physical user interface that was fast, precise and fun to use. We had been questioning the state of existing user interfaces for a while and had been experimenting with new forms of input from gesture recognition, speech and flexible materials to tangible user interfaces. After a process of experimentation and prototypes, we had developed a device that took out the interruptions of our life and called it Flow. It is inspired by things that people already love—like an analog dial—and packed with the latest technology. We added physical buttons as shortcuts, a capacitive touch surface and hand gesture recognition. The device is fully programmable, crafted from high quality materials and made in Germany.

Despite the trend in haptic feedback and gesture-based interfaces, it seems like the majority of our interaction with consumer technology products is still keyboard or touch screen-based. Do you think this is beginning to shift toward more physically engaging UIs?

Graphical user interfaces represent the lowest common denominator to interact with technology. Information is represented through pixels and these pixels are programmable. This makes a tool like your smartphone so incredibly useful and versatile. There are major problems with graphical user interfaces however. The smartphone for example, is the evolution of the computer that found its way into our bedrooms through miniaturization. The way applications are designed carries 40 years of assumptions of a work tool and is split into menus and categories. When it comes to our home however, we don't think of light as a category, we think of it situation based. We don't want any menus here, we just want it to be bright.

Do you think there will be a time when we leave the touch screen and the mouse behind forever?

Here is where one of the big changes is happening. In the past, the advantage of putting everything behind a screen was that devices could be manufactured at large scale and at low cost. Now that the cost for materials and manufacturing are dropping significantly and connectivity is increasing, we finally get the change to design interfaces that perfectly fit a person or situation.

We don't see graphical user interfaces disappearing. What we strongly believe is that user interfaces will increasingly shift away from a generic, centralized device like your smartphone to specialized, decentralized interfaces that disappear in the world around you like tables, windows and walls. We will enable this. 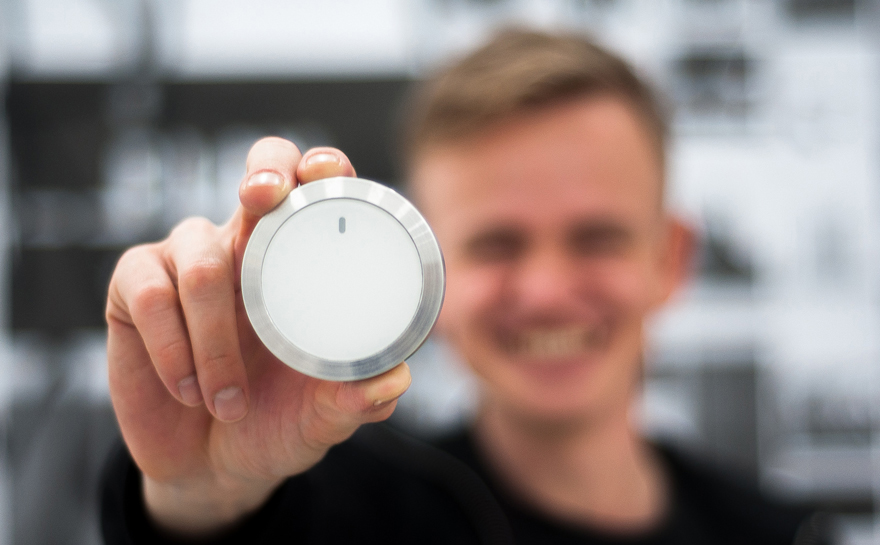 How's the campaign going? What kind of response have you seen to the product?

We launched Flow on Indiegogo three weeks ago and were fully funded within three days. The response from creative professionals and smart homeowners has been overwhelming. The community is so involved that they started creating art, videos and even a 4-minute cartoon for Flow.

We have been approached by large companies that want to integrate with Flow and investors that see the potential of a large and untapped market and want to help us to grow our ideas intro reality. We have also introduced some stretch goals so if we get more backers on board, they will be able to choose between the original version and an all black version or get a crafted bag to protect Flow.

Will we see flow manufactured locally in the United States or outside of Germany anytime soon?

Flow is made in Germany. There are many big misconceptions about manufacturing locally and overseas. Many people still think that there are big price differences for example. We have all lived in Asia and know that this is generally not true anymore. We want to lead by example and explore different ways to increase local manufacturing. There will be points where we won't be able to do it but we go out of our way to question existing assumptions and also change the way products are manufactured today. 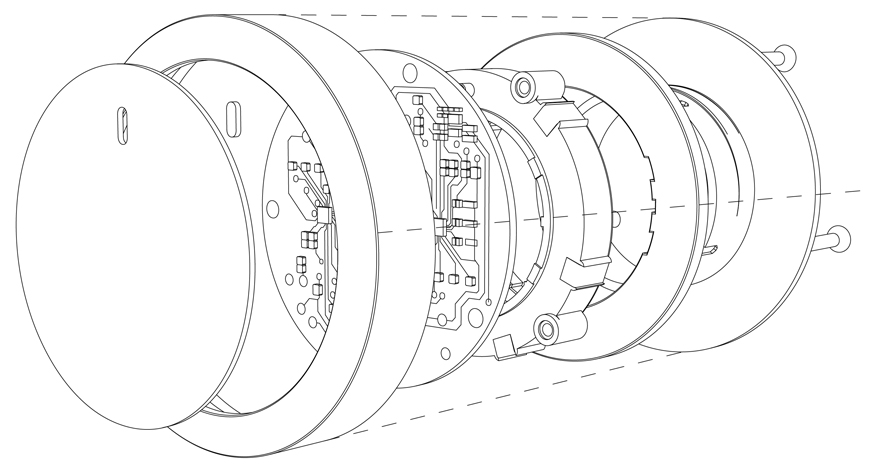 Once Flow has hit the market do you guys see yourself developing a line of products dealing with gesture-based UI in the future?

We currently have a line of approximately 10 products planned and that are based on the learnings of Flow. One of our main advantages of manufacturing locally, in a close relationship with suppliers and manufacturers is that we can develop and manufacture products faster than most people. These products involve surfaces like walls or tables, smart materials, objects and more human senses.

We're lucky to have an amazing team. We have the knowledge, drive and ideas that scream for a revolution in user interfaces. Our goal is to blend technology into the background so you can purely focus on the work or people in front of you. We do that by making the world around us smart.

Thanks to the Tobias and the Senic team for talking with us. More info on Flow can be found on the Senic Blog and pre-orders are still open through Indiegogo.