In the Details: Building the Perfect Spork 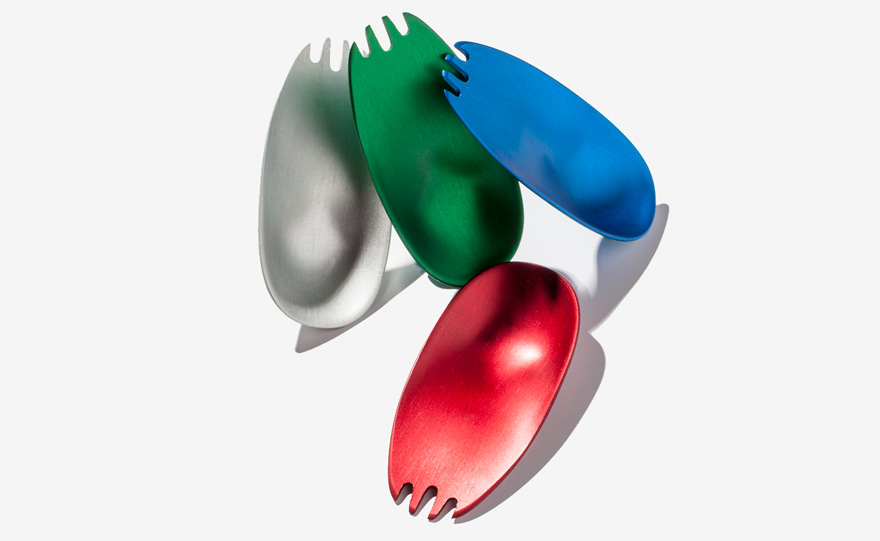 When Micah Baclig embarked on his senior degree project at the Rhode Island School of Design last year, he wanted to create an object that spoke to the ideals of our modern society. "We are a more globalized community with almost instant access to unprecedented amounts of information," Baclig says. "We are constantly striving to do more, learn more and experience more of this life around us." So he created...a spork.

Specifically, Baclig created a compact aluminum spork that he has dubbed Kuma, and which he is now funding on Kickstarter in an effort to do a production run for next year. (As of press time, he had raised more than 80 percent of his $18,000 goal.) But wait—why exactly does today's globalized, information-soaked society need a reusable aluminum spork?

Kuma is the result of Baclig's insatiable curiosity and fascination with eating utensils—their history, how they work and what cultures created them. "From forks to chopsticks to even our own hands, what we eat with says something about who we are and where we came from," Baclig says. "Growing up in Hawaii with multi-ethnic parents, I constantly experienced this dynamic between food, utensils and culture. I fondly remember the times at the dinner table when my father, a first-generation immigrant from the Philippines, would put down his utensils to eat a meal he particularly enjoyed with his hands."

For his degree project, Baclig focused his interest on eating tools that were both multifunctional and portable, which immediately brings to mind the spork. "In trying to be both a fork and spoon the spork is neither, which for some reason fascinates me," he says. "I also appreciate the spork's subtext of trying to achieve an ideal functionality."Further research revealed other circumstances and time periods when it was not only acceptable but fairly common to carry around your own eating instruments. For example, there are the functional and portable mess kits that various military units have given to their soldiers throughout history—and the lesser-known folding fork-spoons of the 17th and 18th centuries that wealthy Europeans would bring to dinner parties before it was customary for a host to provide their guests with cutlery. Baclig began his project by mapping out the history of these items and how they changed through time, cataloging the precedents for portable eating devices.

Simultaneously, the designer developed experiments to test and interpret the conclusions he had drawn from his research. Most notable was the "Meal Selfie Challenge," where he asked participants to take pictures of every meal they ate for a week as a way to see not only the types of meals they were eating but also the environment they were eating them in and the utensils they were using—information that would inform the final design of Kuma.

After absorbing as much information about eating implements as one can (and you can, too, by checking out Baclig's list of resources), the designer sketched, prototyped and tested multiple iterations of his design. Prototypes ranged from simple chipboard mock-ups to forged sheet-metal forms and working PLA prototypes 3D-printed on the RISD industrial design department's army of MakerBots. 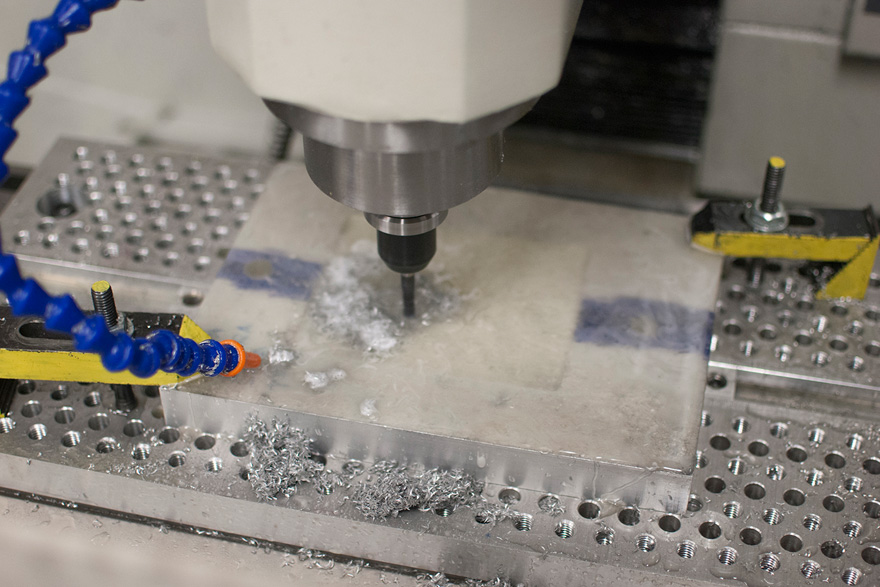 Above and below: Baclig's jig used to create the spork's bowl 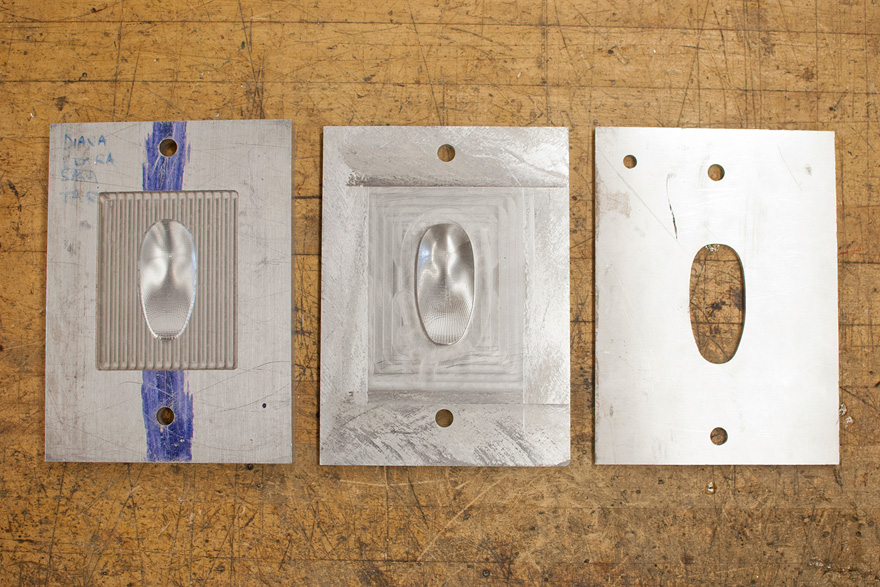 The final prototypes for Kuma were made from a series of jigs meant to replicate sheet-metal stamping, an industry process Baclig will be using for the final edition of Kuma (pending the success of his Kickstarter campaign). After working out the final form and shape of his spork, Baclig modeled a press jig that would draw the shape of the spork's bowl from sheet-metal blanks using a hydraulic bottle-jack press. Shop techs helped him bring that concept to life, using the RISD industrial design department's new Tormach CNC milling machine to make the first jig.

Left: The jig and the bottle-jack press in action. Right: The wooden jig being made

In lieu of making a shearing die, Baclig made an additional jig out of wood that held the blanks in place as the CNC cut out each Kuma spork individually. 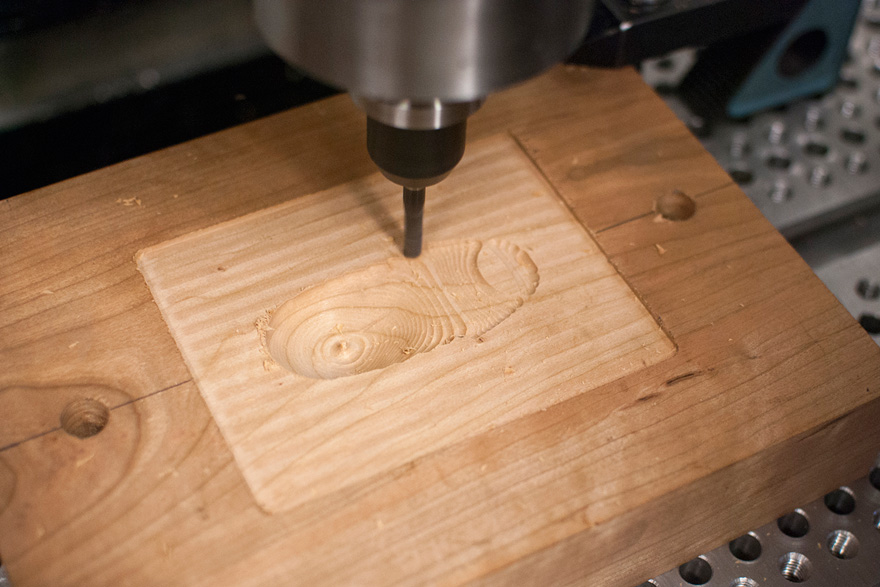 Above and below: The wooden jig being made and used to hold the blanks in place 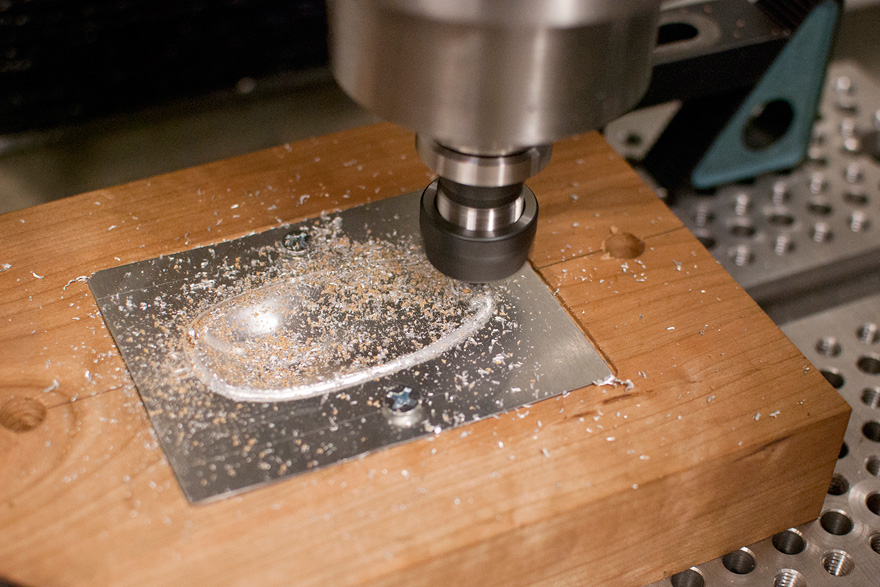 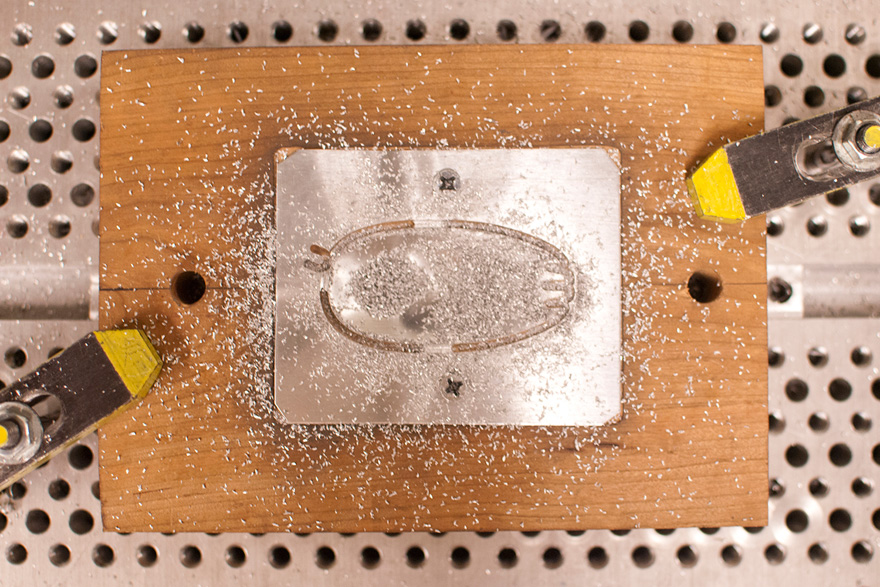 "Ultimately, the setup I devised is absolutely ridiculous from an industry or manufacturing perspective," Baclig says. "But for the purpose of making a small run of usable prototypes—I've probably made about 40 to 50 Kumas with this setup—it worked pretty well."

Baclig decided to bring Kuma to Kickstarter only after persistent encouragement from his professors and peers following his degree project presentation. Based in Providence, Baclig spent the summer after graduation forging relationships with local manufacturers, assembling a business model and planning out a marketing strategy. "It was quite an experience putting myself out there with little to no credibility other than my design degree," he says. "Many of my manufacturers did not know what Kickstarter was when I pitched my product to them."

The result of his Kickstarter will determine his next steps. "If I am successful with my funding goal, I am staying in New England to oversee the production of Kuma and to make sure I deliver a quality product on time," Baclig says. "I don't have other utensils lined up after Kuma, but this topic is very dear to me so I'd love to keep designing around this prompt or return to it one day. Outside of Kuma, I am very open to what the future may bring." If you want to support his cause, you can snag a Kuma spork in hard-coated anodized 5052 aluminum and 304 stainless steel via Baclig's Kickstarter page, where the going reward price is $10.

In the Details: Building the Perfect Spork