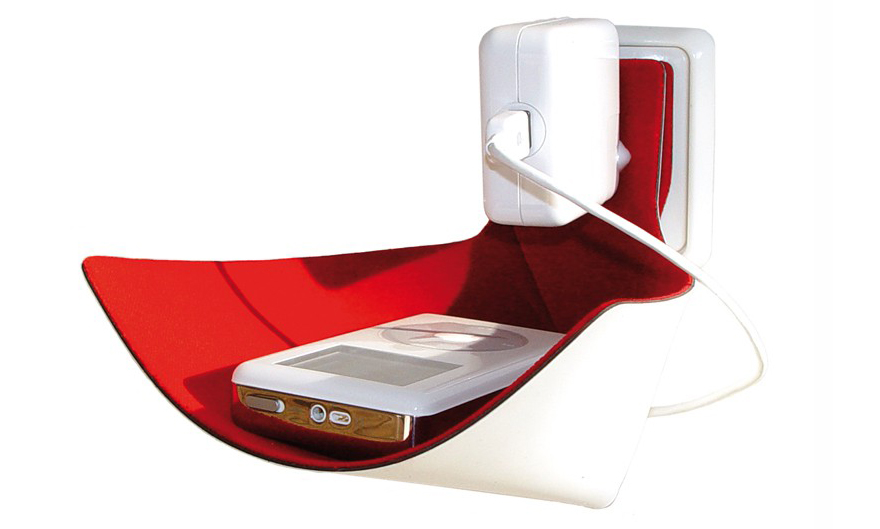 Many of my organizing clients have multiple mobile devices, and they get concerned about the space it takes to charge all those devices. No one likes a mess of cords on the kitchen countertop, the nightstand, the floor, etc.

For those who only have a couple phones (or perhaps an iPod), a few load-ding gadgets from xxd, designed by Max Kistner, might be all they need. These fold up to form a tray to hold a device by the socket; it's similar in concept to the Driin, which we wrote about before. However, there's nothing in this design to help manage the long cables that some of these devices have. 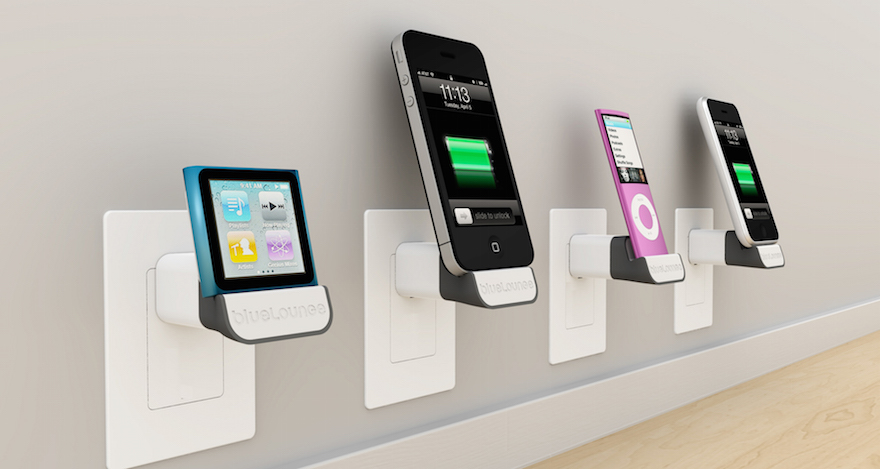 The Bluelounge MiniDock is also a single-device item used at the socket, but it solves the cable problem; there's no need to use a cable at all. The MiniDock attaches to the user's Apple USB Power Adapter, and the iPhone or iPod attaches to the MiniDock. Drawback: Users note that the MiniDock doesn't work with all iPhone cases—and no one wants to remove the case to charge the phone. 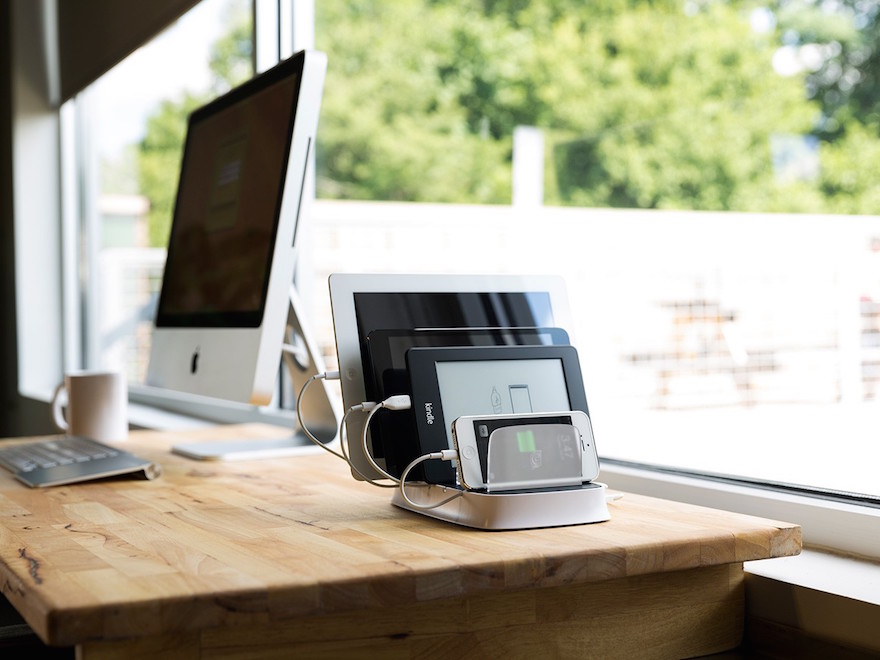 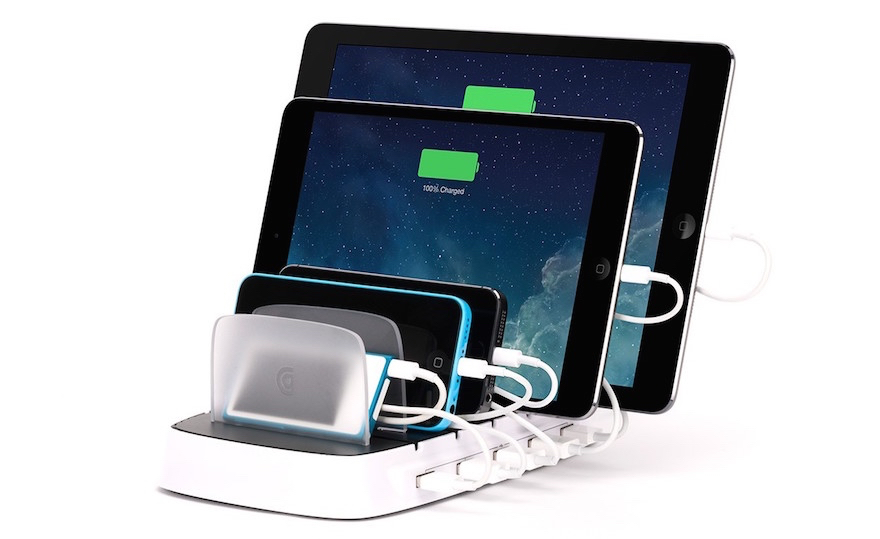 But many users are looking for charging stations that sit on a counter (or other similar surface) and hold multiple devices. The PowerDock 5 from Griffin Technology charges five iOS devices in their cases (and also works with many Kindles and Android devices) in a relatively small footprint. Again, though, there is no cable management control built into this design.

Power output (and the resultant charging time) is also a concern in all such devices. The PowerDock 5 provides 10 watts (5 volts DC @ 2.1 amps) for each charging bay. The manufacturer notes that "Many smartphones and tablets have unique charging requirements, so PowerDock may not charge your device as fast as you're used to."

The Converge, from Quirky, seems best suited for smaller devices such as smartphones and cameras. It provides some cable control with the straps on the rear side of the charger. 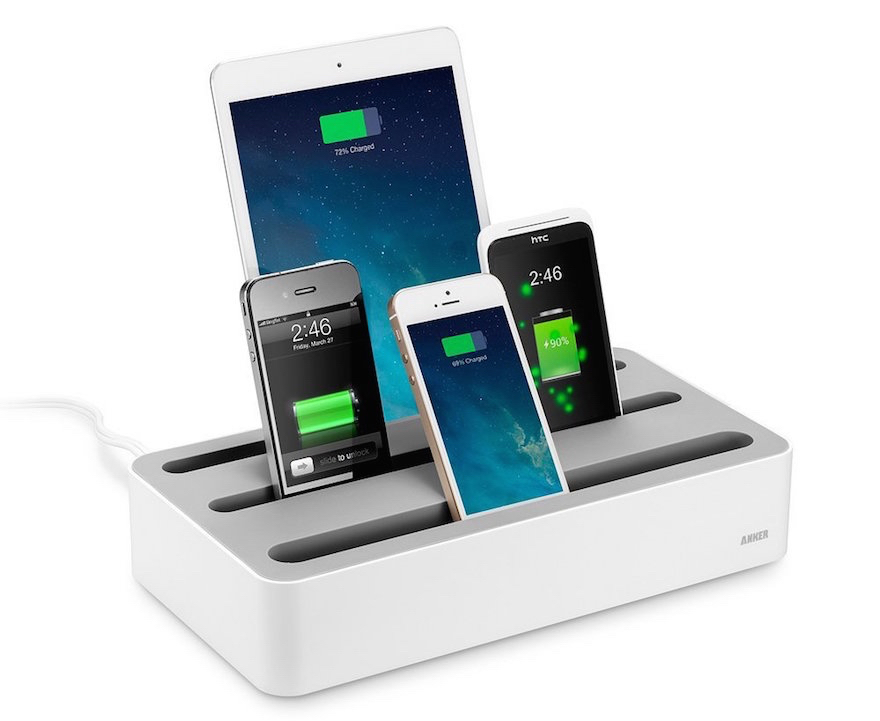 Other products, such as the Anker five-device charging station, are specifically designed to hide the cables. However, one user said that there's a minor problem with that. "It is a little fiddly to get it closed properly with all the cables tucked inside, as they tend to spring up and get caught in the crevices of the box." And another agrees, saying, "In my opinion, the tray is too shallow to accommodate the volume of 'hidden' wires used to charge 5 devices." It's a sleek design, but some users would like it to be less sleek and more roomy. 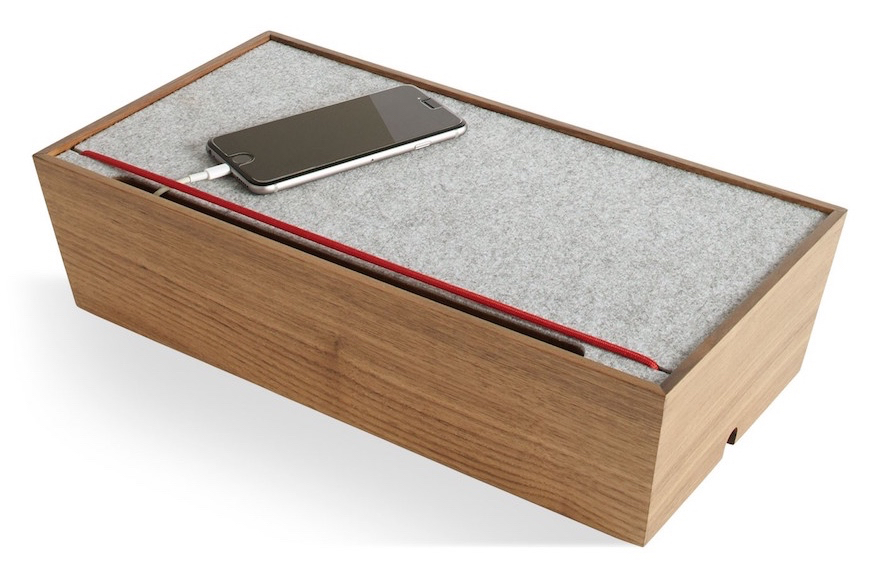 The Juice Box from Blu Dot is an interesting contrast to the Anker device. The Juice Box focuses on hiding the cords; it has a deep 4-inch box for storing the cords vs. the 2.2-inch deep box for the Anker product. It's a different kind of design, with the four devices laying flat rather than standing up, so it takes up more horizontal space than the Anker product while charging four devices rather than five. The Juice Box is built to accommodate the power strip of the user's choice, rather than having one included. That will appeal to users who have strong opinions on the matter, and annoy others who would rather have a complete solution, with one less decision to make.

The Belkin Conserve Valet has yet another focus, as the name indicates. It automatically shuts off power, including standby power, after the devices are fully charged. (Actually, it shuts off at 4.5 hours, which is when Belkin assumes the products are charged; it's not actually testing to see that they are.) It senses when new devices are added, and restarts the time counter so they get charged, too.

The Kinodai from Sample is interesting because it plays with the assumption that the devices being charged, if being held upright rather than flat, must be strictly horizontal or vertical. From a practical standpoint, it really doesn't make much difference if they are at an angle, instead. 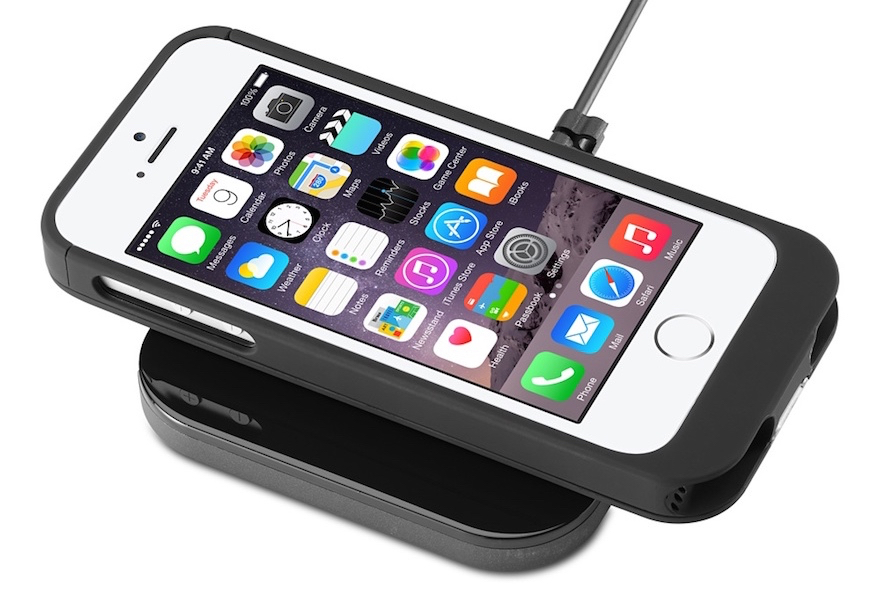 Another interesting variation on charging station are the wireless chargers. There are multiple wireless standards at the moment, which certainly complicates things; any users looking for a charger must make sure it would work with their devices, either through the direct charge model (where the phone natively supports the charger's standard) or through the use of a charging case. The Duracell Powermats, which use PMA technology, work with the iPhone 5 and 5S via a charging case. Other charging pads, such as those from Choetech, work with the Qi format. 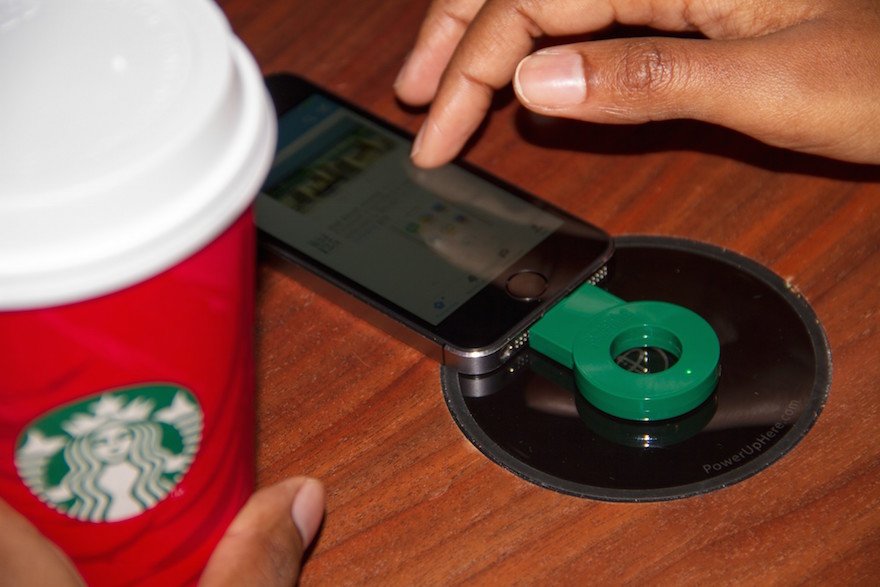 Powermats are getting more attention recently because they're beginning to get installed in Starbucks stores. These mats, unlike the consumer versions, will be accessible through rings that plug into the user's device and then get placed on a Powermat Spot—a relatively simple and inexpensive work-around to the compatibility issues. 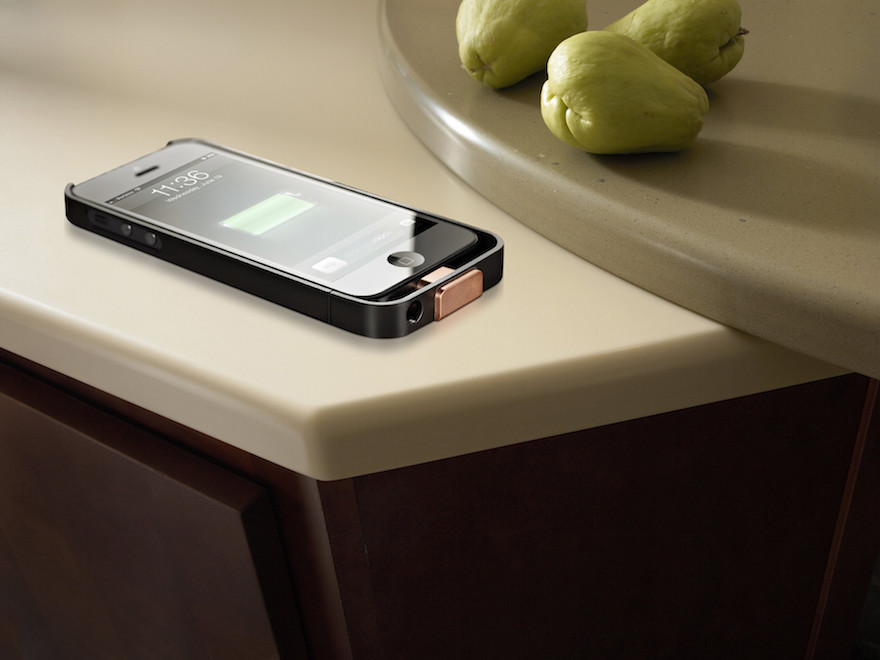 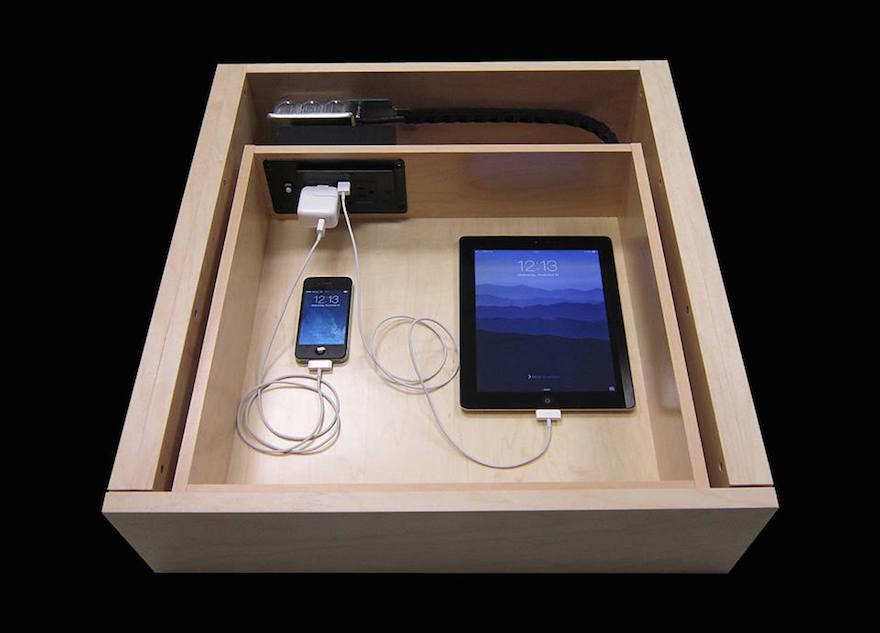 Here's another design, for users who would prefer to have their devices out of sight while they charge: the Docking Drawer.