In the Details: Making the Eclipse Clock, a Functional Sculpture by Artist Iván Navarro 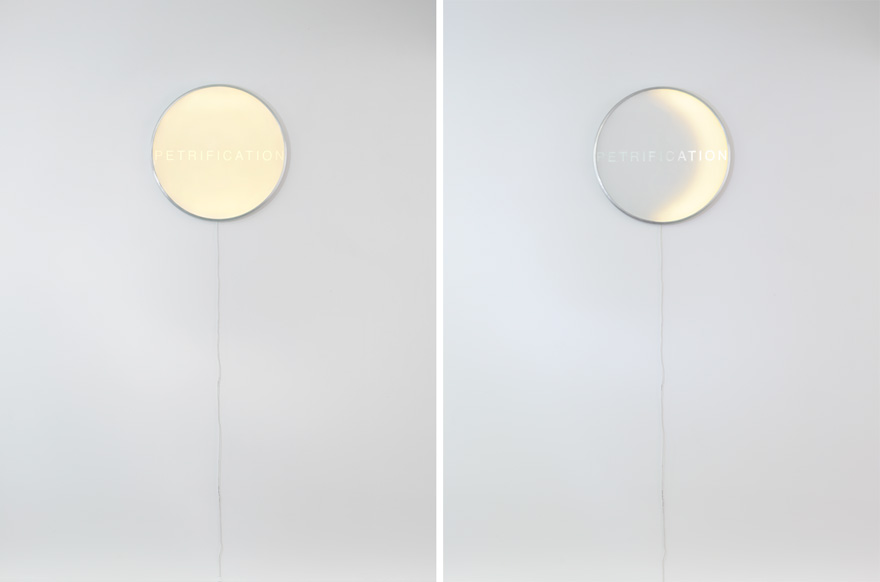 If your New Year's resolution is to spend a little less time working and a little more time relishing the day-to-day, you might want to consider investing in the Eclipse Clock. A gentle reminder of the passing of time—and of the inevitable deterioration of our bodies—the timepiece stands as a somewhat functional sculpture that blurs the line between art and utility.

Designed by the Chilean-born, New York City–based artist Iván Navarro, the Eclipse Clock was made exclusively for Paul Kasmin Gallery's PK Shop in an edition of 50, and produced in partnership with the shop's director, Polina Berlin. The first consumer product by an artist known primarily for his neon light–based installations, Navarro's Eclipse Clock depicts the passing hours through light and shadow, which cross over its face in phases (much like its namesake). As time passes, the word PETRIFICATION—etched into the glass face—becomes increasingly visible, a reference by Navarro to the archaeological process of understanding time and the history of the earth through the layers of its sediment.

"Iván wanted to make a functional sculpture, and an eclipse brings together two notions that have always interested him: light and time," Berlin says. "Incorporating the metaphor of an eclipse into a functional clock really appealed to him." Navarro and Berlin worked with the British industrial designer Robert Nightingale and his studio to bring the idea to life. Starting with hand-drawn sketches, the team created rough prototypes using lightbulbs and masking surfaces such as coffee cups, before moving on to CAD and 3D models. 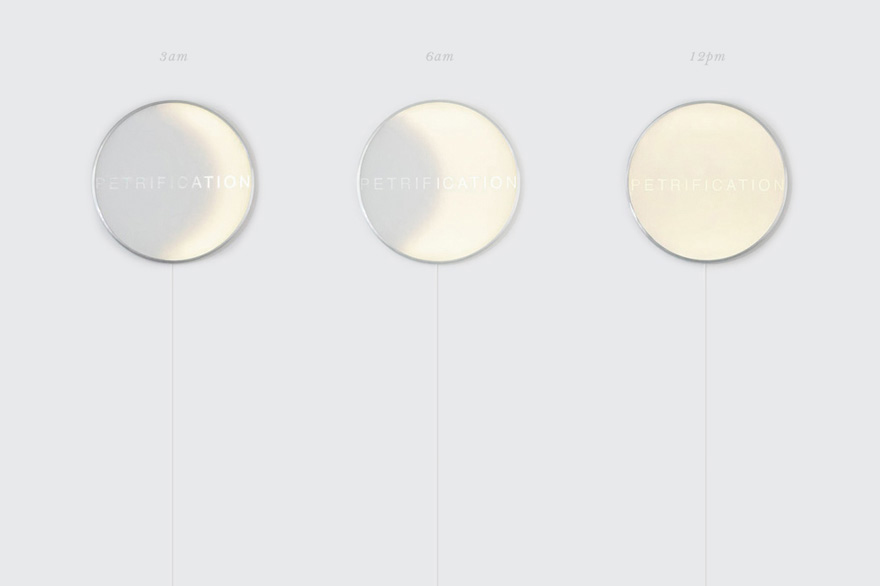 Mimicking the movement of an eclipse was the biggest challenge for the team. Initially envisioning the object as an opaque disc moving across an illuminated surface, Navarro created a CAD model for a prototype to be made of sheet metal that would move horizontally across a backlit surface. The engineering for the concept proved too complicated, however, so the team continued to explore a variety of materials—including CNC-ing the entire clock out of Corian. After struggling with getting light to pass through the piece, they next experimented with OLED light sources embedded into five-millimeter-thick sheets of mirror, a technique that made it easy to create the illusion of time but impossible to create a pure eclipse effect. Ultimately, Navarro decided that a digital version of the movement felt the most elegant and conceptual, and the team settled on using LEDs to create the eclipse behind layers of acrylic and glass.

Spun-aluminum prototypes that incorporated LEDs and circuit boards were used to mock up the look and feel of the final product. "There was a lot of mathematics, timing calculations and light tests to create the warm glow across the surface," Berlin says. "[In the end] Iván settled on the pure white face, warm light and the raw aluminum bezel." No stranger to working with light, Navarro brought on many of his long-time neon fabricators—such as Manhattan's Let There Be Neon studio—as well as local shops to help fabricate the various clock components. Each piece was sourced, made and assembled by hand in New York City.

More than a thousand LED lights housed inside the sleek, spun-aluminum casing were used to achieve the final effect of an eclipse, while maintaining the slim profile of a wall-mounted design. Starting out entirely dark at midnight, the device's light sources are completely off, and then gradually illuminate as morning approaches. Rows of lights begin to glow beneath the etched glass and a semi-transparent layer of acrylic, starting along the western edge of the clock. The LEDs form a crescent shape that moves laterally across its horizon—a pattern pre-programmed by Navarro. Fully lit at noon, the light slowly recedes back to pure darkness at midnight, repeating the cycle every 24 hours.

Another challenge in designing the Eclipse Clock was ensuring that it was not only accurate over a 24-hour period but also intuitive to a user. Sitting on the floor beneath the clock is an aluminum box, which holds external components and a control panel—a knob and LCD screen inside the box allow the user to easily set and adjust the time.

Navarro's Eclipse Clock will be featured at the opening of the Light Shop at PK Shop's flagship New York location on January 7. While the $7,500. price tag might be somewhat jolting, it's a small price to pay for the appreciation of time, don't you think?

In the Details: Making the Eclipse Clock, a Functional Sculpture by Artist Iván Navarro