12 Valet Stands for the Organized Sartorialist 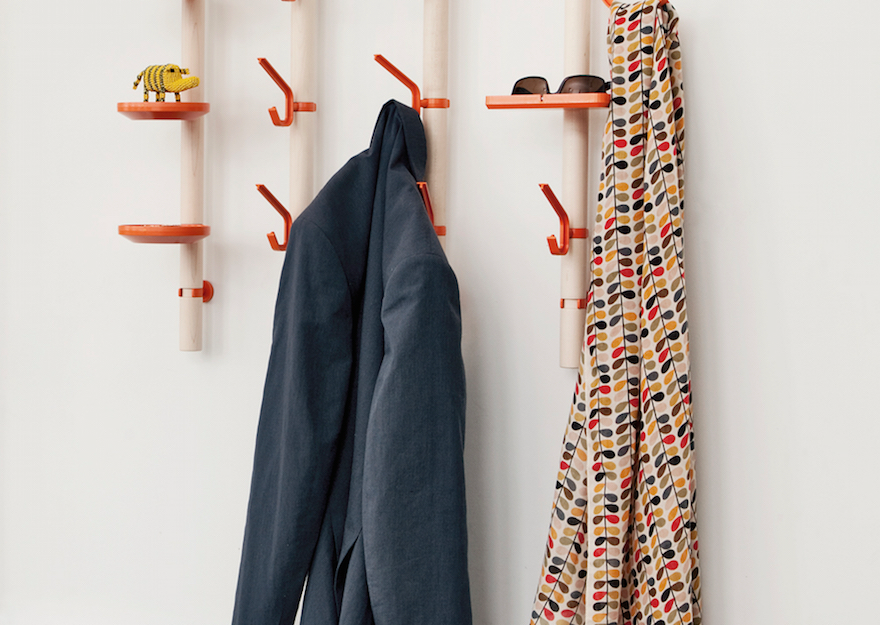 Valet stands are useful for airing out just-worn clothes, for gathering together those to be worn the next day (along with any accoutrements), or for stashing those clothes that have been worn but aren't dirty enough to need cleaning. The traditional valet stand has the features you see on the Sir Bis from Porada, designed by Marconato & Zappa: a place to hang a suit jacket, shirt and pants, along with a tray for things like glasses, a watch, cufflinks, a wallet, etc. 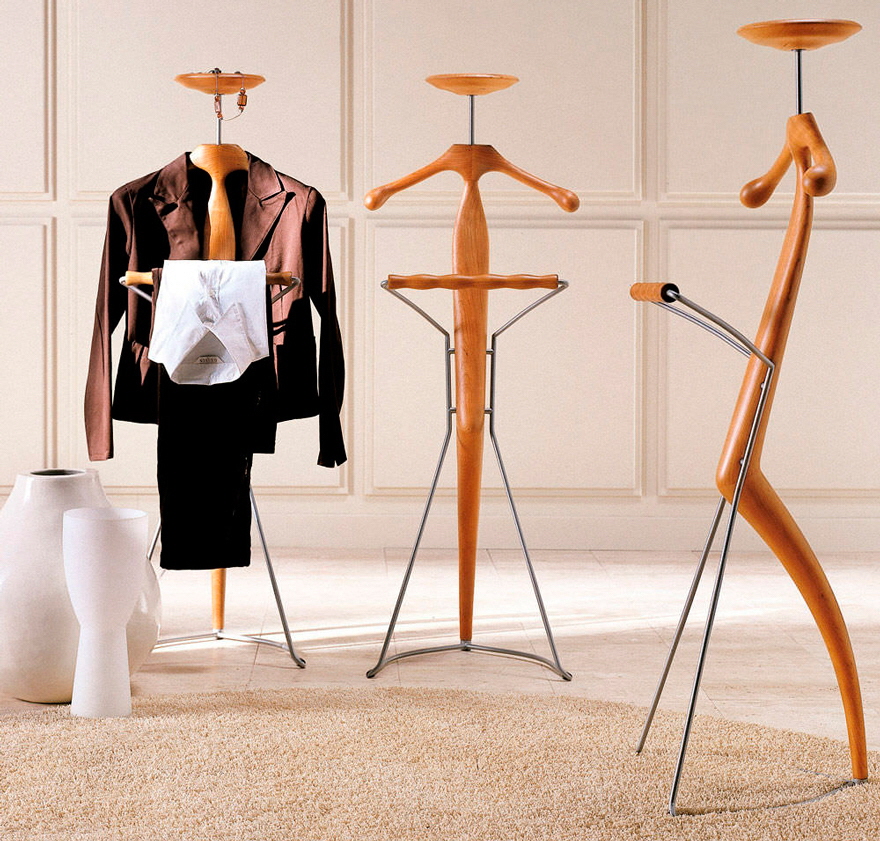 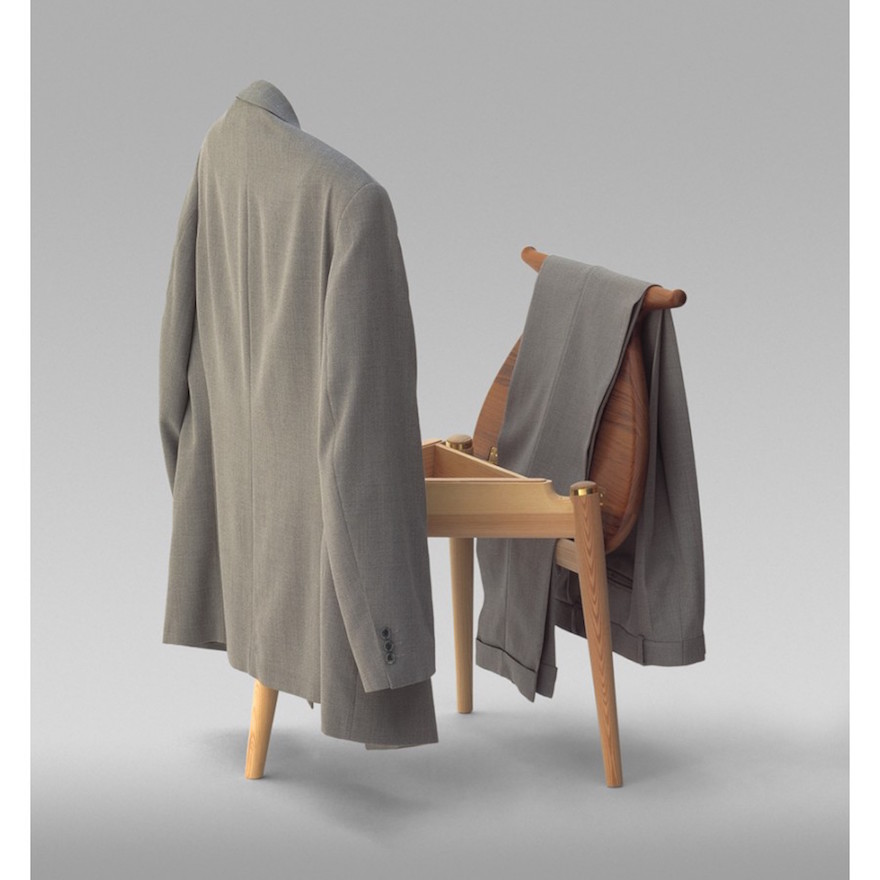 Hans Wegner designed the Valet Chair back in 1953. The back rail holds the jacket, the seat come up to hold the pants, and the tray is replaced by the base of the seat. This has the added advantage of providing a place for the users to sit down while putting on their shoes. 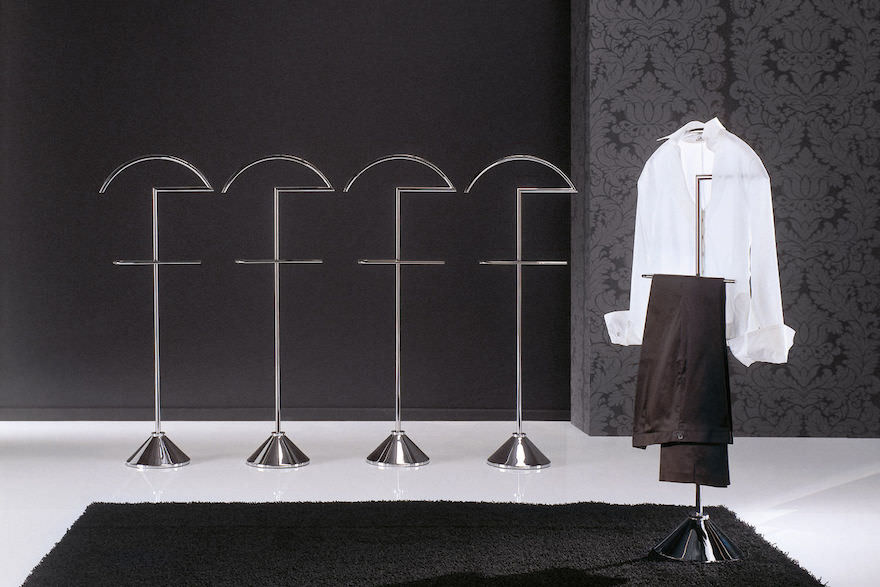 The Clip from Porada, designed by E. Mapelli and P. Passarino, is a simplified valet stand that would work for those not needing the jacket support or the tray. The less bulky design will allow it to fit into spaces where other stands might look out of place. However, it seems less stable than some other designs; it could easily be tipped over by a child or a rambunctious pet. 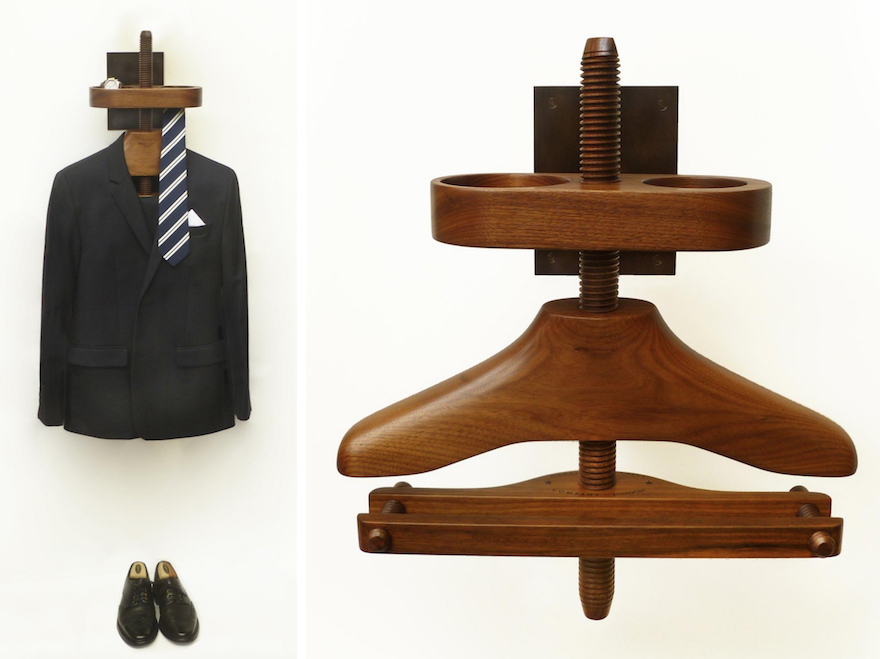 The Gentleman's Valet Company has a wall valet, useful for rooms where floor space is limited. The company provides either a trouser bar or a trouser/skirt clip hanger—a nice recognition that valet stands are used by both men and women. Even users not wearing skirts might prefer a clip to a bar, so it's smart to provide that alternative.

The height of each component (accessory tray, jacket hanger and trouser bar/clip hanger) is adjustable on the threaded center column. Features like this that allow a user to easily customize a product are always welcomed. 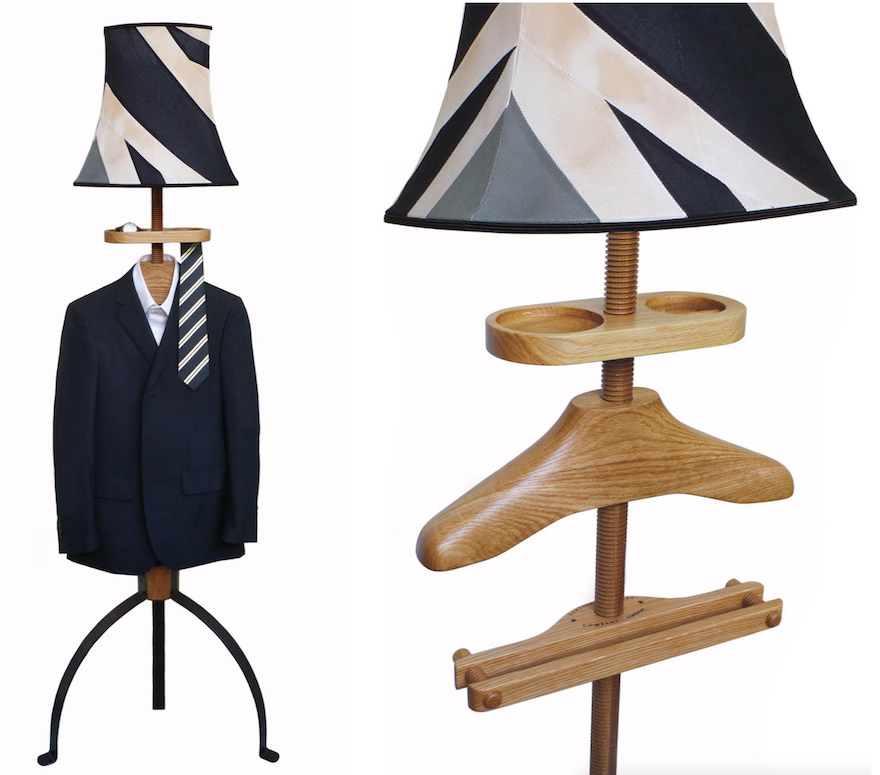 The same company also provides a valet stand that incorporates a lamp. At first this seemed silly to me, but then I thought of someone getting dressed on a dark morning and could see situations where it might be helpful. 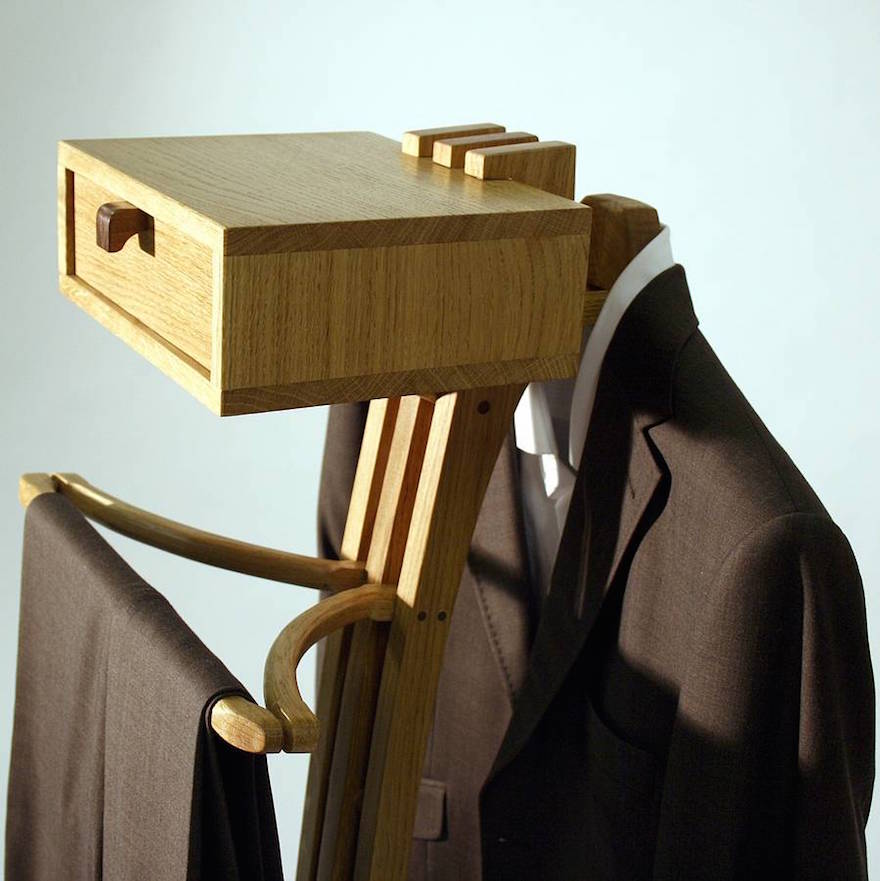 Some valet stands, such as this one from Stephen Morris Furniture, use a drawer instead of a tray. That provides a bit of extra protection for items, but won't work for those users who need everything out and visible. 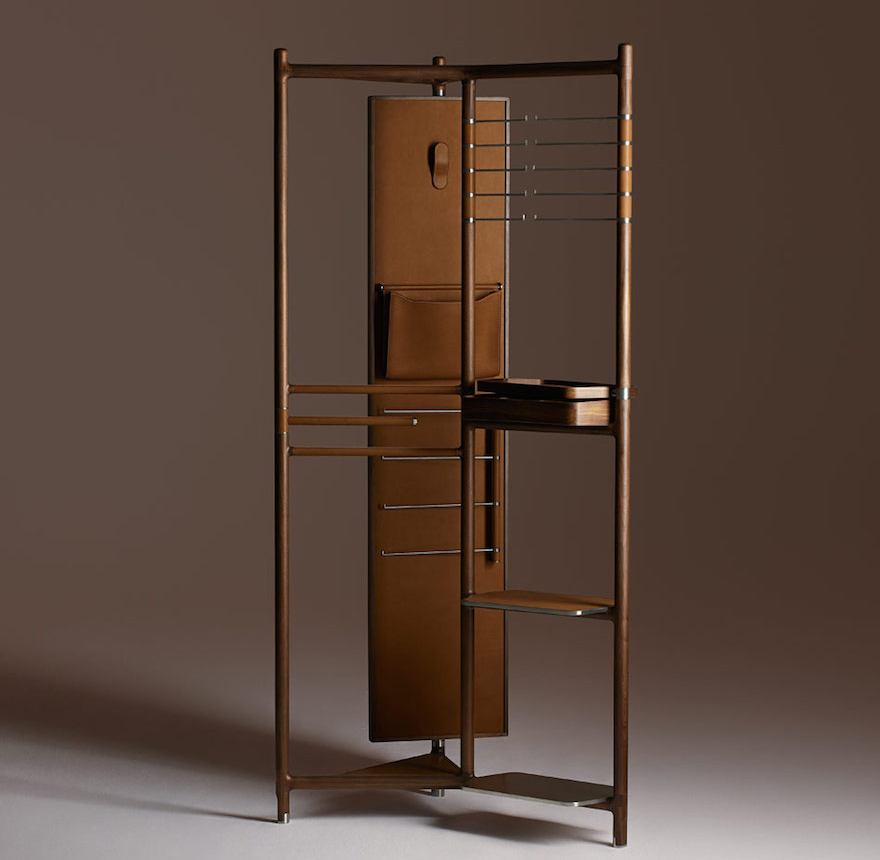 Not all valet stands provide a jacket or shirt/blouse hanger; some rely on hooks. The Groom Valet from Hermès, designed by Philippe Nigro, includes a rotating mirror, a pouch on the back of the mirror (along with that hook), a shoe stand, a shelf that could hold a purse or computer bag, a tray, and plenty of places to hang things like pants and scarves. It's a lovely and functional piece for anyone with the room for it—and with $48,800 to spend on a valet stand. 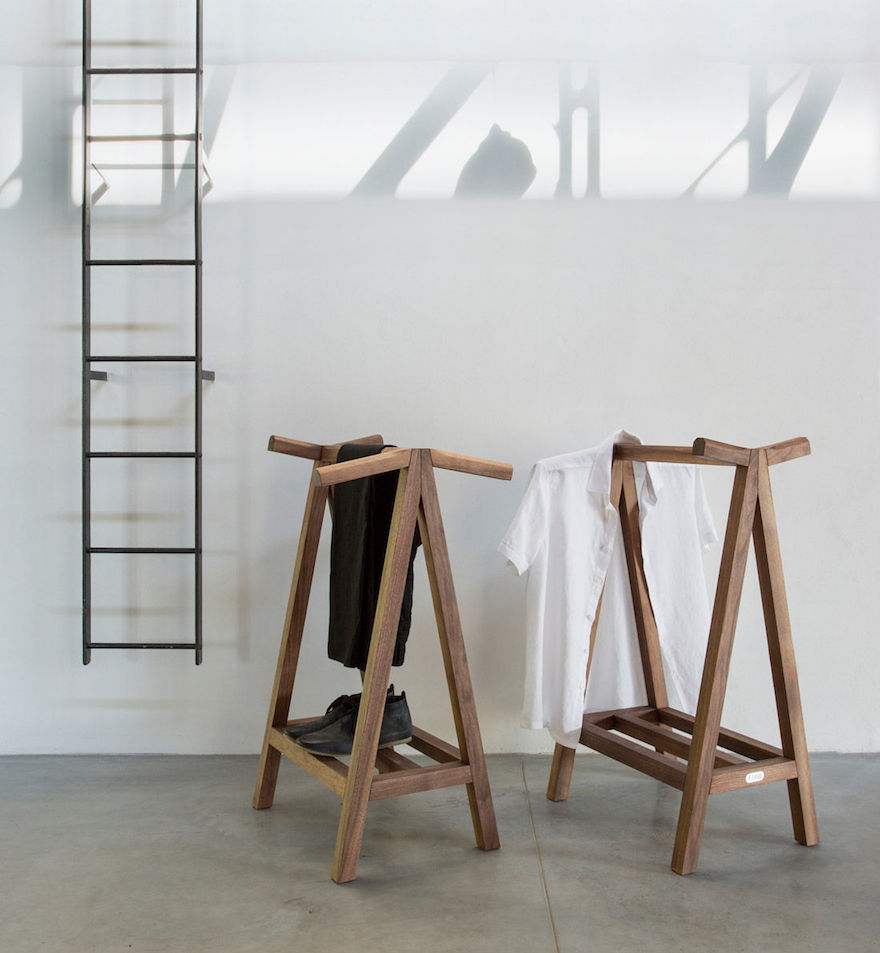 The Servant 01 valet stand from LUGI still has all the components of a traditional valet stand; while the photo above doesn't show it, there's a tray you can add between the top bar and the shoe rack, and the shoe rack can also be replaced by a tray. The tray in the middle seems as though it would interfere with the pants, though, and having one down near the floor is awkward. Also, the end pieces don't look well-shaped for hanging shirts or jackets.

Atelier D provides an informal approach to the valet stand with its Valet Houndstooth. This isn't going to work for someone with a nice jacket, but it's just fine for someone with jeans, shoes and a few accessories. 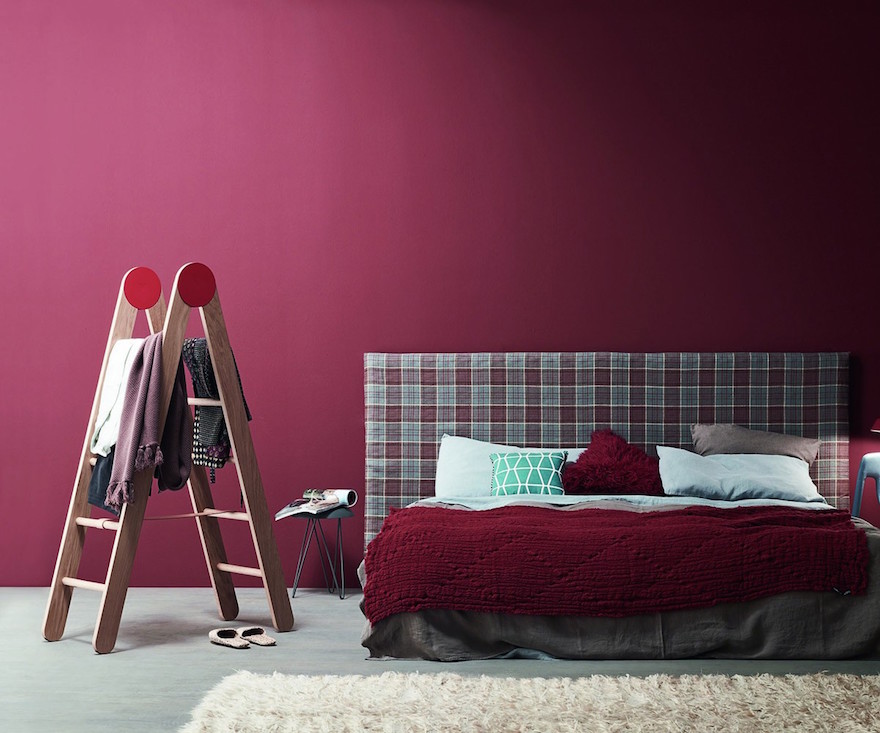 The Compass Hanger from Casamania, designed by GamFratesi, accommodates pants hung on the rungs and shirts slung over the rounded end pieces. Items on the bottom rungs might be hidden from view and hard to get to, though. One big advantage of this piece is that it can be folded up and stored away when not needed. 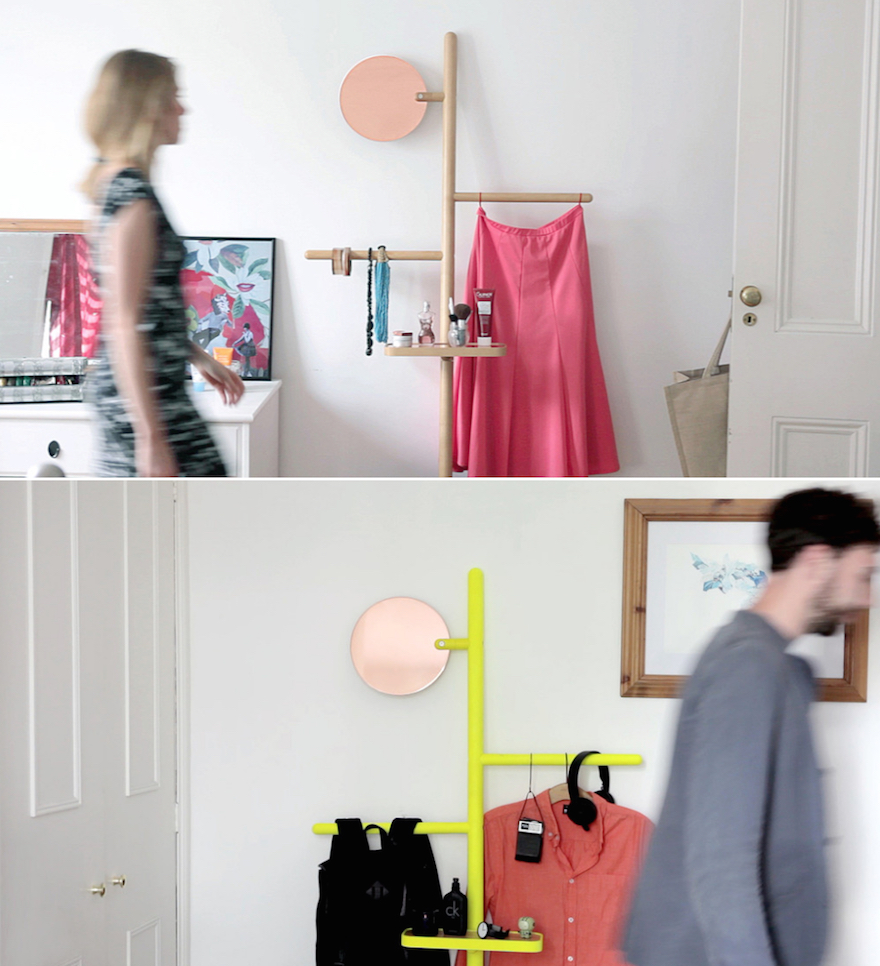 The Camerino valet stand from Brose~Fogale leans against the wall; it has anti-slip rubber grommets on the base. There's no jacket hanger, but regular coat hangers can be hung from the bars. This valet stand was specifically designed for users living in small spaces who might move frequently; it comes in a flat pack and is said to be easy to assemble, requiring only an Allen key. It incorporates a mirror, as some traditional valet stands also do. 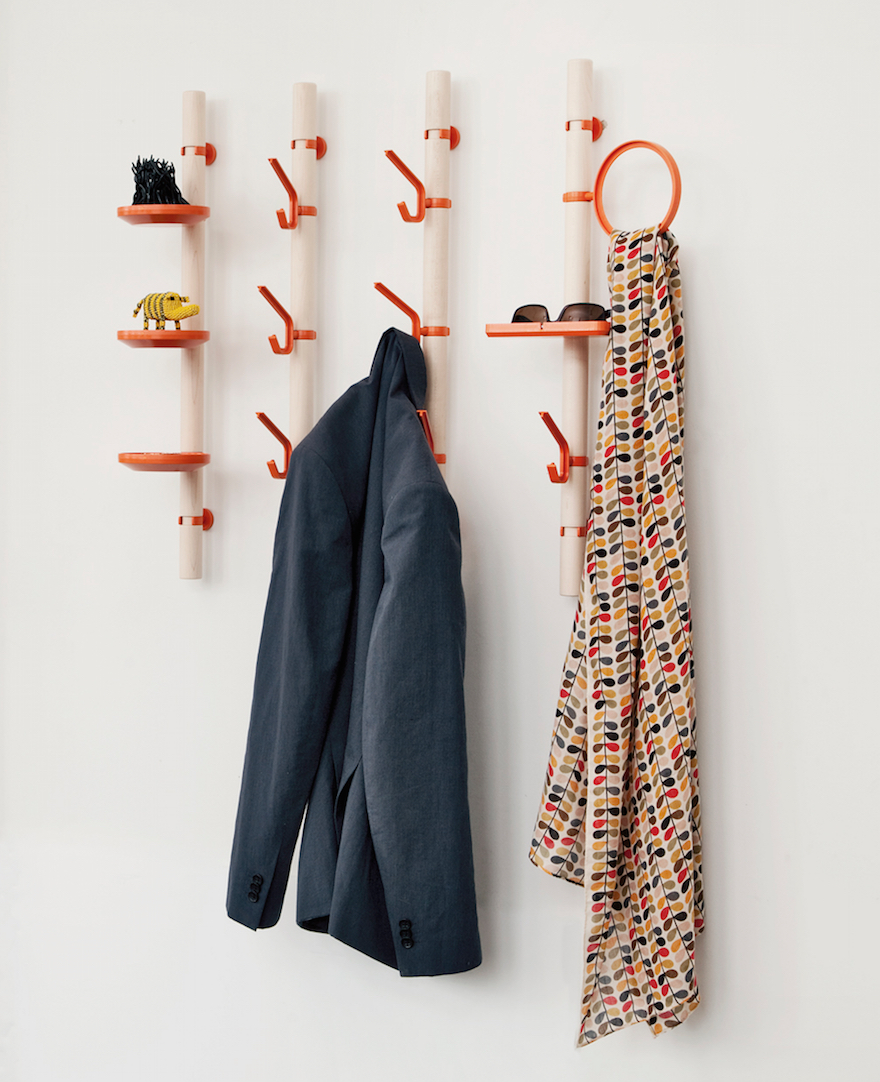 The Clip Tree Valet from McCarty Quinn Design Studio is a wall-mounted product with clips providing hooks, trays, and a mirror. However far Clip Tree has come from the traditional valet stand, it could still serve the same general purposes.

12 Valet Stands for the Organized Sartorialist