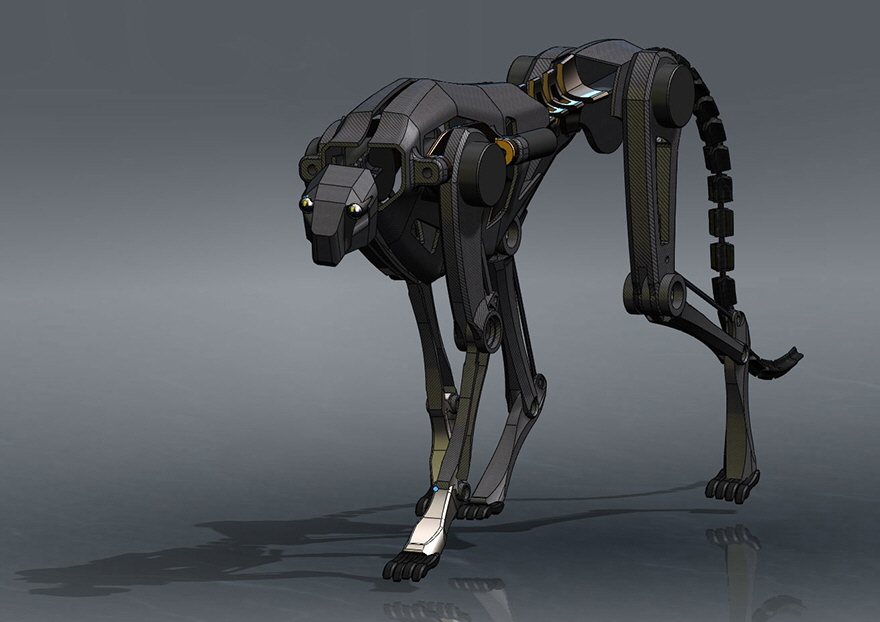 After seeing the "design features" that enable the cheetah to run so fast, I wanted to circle back to Boston Dynamics' robo-cheetah, which we looked at a few years ago. Their creation isn't faster than a Ferrari, but with a top speed of 28 miles per hour, it's faster than Usain Bolt.

The concept rendering is a good deal more optimistic-looking than the actually built version, which is headless, tailless and needs to be connected to an external power supply:

However, more recently another Boston-based team has been working on a cheetah-bot of their own, and this one runs under its own power. MIT has harnessed the talent from several of their departments to create their robotic cheetah, which uses a high-torque-density electric motor designed by one of their Electrical Engineering professors and motor controllers designed by another engineer in their Research Laboratory of Electronics. Those aren't the only design differences in MIT's approach. Whereas Boston Dynamics' cheetah seemed a bit more lithe, MIT's version doesn't appear to mimic a real cheetah's bone structure. Instead mechanical engineering prof Sangbae Kim, who appears to be skippering the project, is attempting to model various cheetah-like gaits by developing algorithms.

Kim and his colleagues developed an algorithm that determines the amount of force a leg should exert in the short period of each cycle that it spends on the ground. That force, they reasoned, should be enough for the robot to push up against the downward force of gravity, in order to maintain forward momentum.

"Once I know how long my leg is on the ground and how long my body is in the air, I know how much force I need to apply to compensate for the gravitational force," Kim says. "Now we're able to control bounding at many speeds. And to jump, we can, say, triple the force, and it jumps over obstacles."

They did indeed get it to jump over things and keep running. Check it out:

What's strange is that neither Boston Dynamics nor MIT has mentioned the post-running functionality of the cheetah-bots. For example, once they catch their prey (presumably political dissidents or business competitors) how do they bring them down and dispose of them?

We'll have to wait for that answer. The first step is ensuring that no human being can outrun these things, not even Usain Bolt. While Boston Dynamics has solved the speed problem, MIT's 'bot can currently only do 10 m.p.h. So for now I'm not worried; I could outrun that thing with a beer in my hand.