Crossrail is the massively ambitious £15 Billion railway project in the south of England cutting new tunnels under London to connect towns in the east and west with the ever growing metropolis. For anyone with even the slightest interest in architecture and engineering, the progress of the project—begun in 2009 after years of negotiations—has been a jaw-dropping (and at times nail biting) spectacle to behold. With what must be the biggest PR success in UK infrastructure building ever, the British public have been kept well up to speed with events going on under Londoners' feet—all happening with remarkable punctuality—with plenty of pictures of cavernous completed tunnels and smiling workers in orange overalls. With the service set to start in 2017, we're also eagerly awaiting the upcoming design for the trains, both interior and exterior, by Barber Osgerby.

It wasn't really until I watched the BBC's four-part documentary showing the work going on behind (or perhaps, before) the glossy press pics, that I began to fully appreciate what a masterpiece of engineering and detailed planning this development represents. The first episode follows engineers undertaking one of the toughest challenges of the project codenamed 'threading the needle.' Unfathomably, the Crossrail tunnels intersect with the busy Tottenham Court Road station by worming through a mess of cables, pipes and sewers to pass only 85cm above the crowded and fully functioning Northern Line platforms and 35cm below the station's escalators. Needless to say, the engineers were successful in their mission—threading the needle without crushing unwitting commuters or pulling down the Centrepoint building. 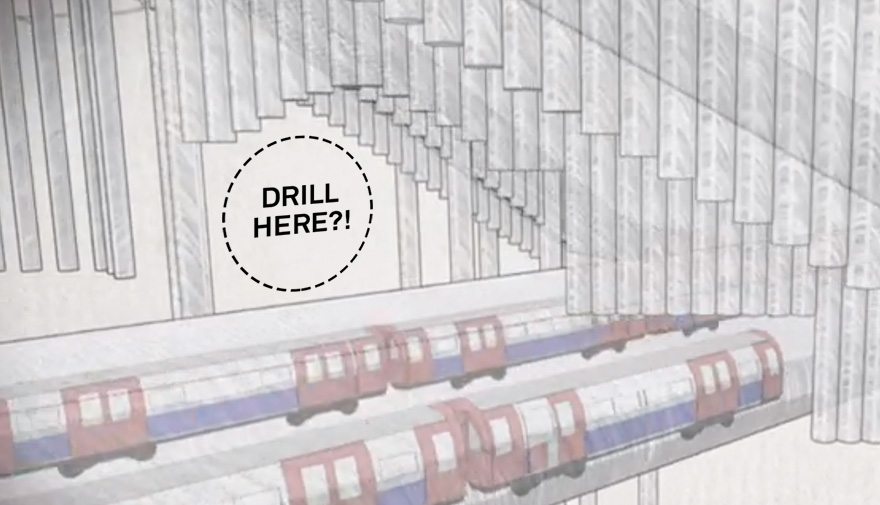 For all the tense drama of needle trheading, a moment that occurs later in the episode really made an impression on me. In the days running up to the 'needle,' the tunneling machine—a beautiful feat of engineering in it's own right—had passed under the historic Soho Square in central London with much cause for concern for owners of the area's priceless buildings. Having anticipated the stress the underground excavation may have caused to these ageing structures, Crossrail engineers have equipped the city with an army of lasers and sensors—a continuously working system tracking any movement in buildings as work continues underground. One of the most precious buildings on the historic square—The House of St Barnabas boasting rare and fully intact 1750's rococo ceiling plasterwork—has been fitted with all sorts of high tech sensors and near invisible structural support to cope with the movements below.

So, lasers and sensors are all very good and well, but what do they do if a building starts to sink—surely then it's too late. Well, apparently not. All this tracking and triangulating gives engineers real-time information on the structural integrity of the ground around the dig. If a building gives signs of shifting, the engineers in the grout shaft spring to action. These deep vertical tunnels have been built all over the city, with four dotted around Soho Square. Each of the tunnels is lined with a diverging set of pipes that run under the buildings. Should a structure start to slip, engineers can push thick hoses into these pipes to the desired location and fill in the local area with some form of concrete—kind of like giving the city's soil a facial filler—and slowly raise the building back to its original position.