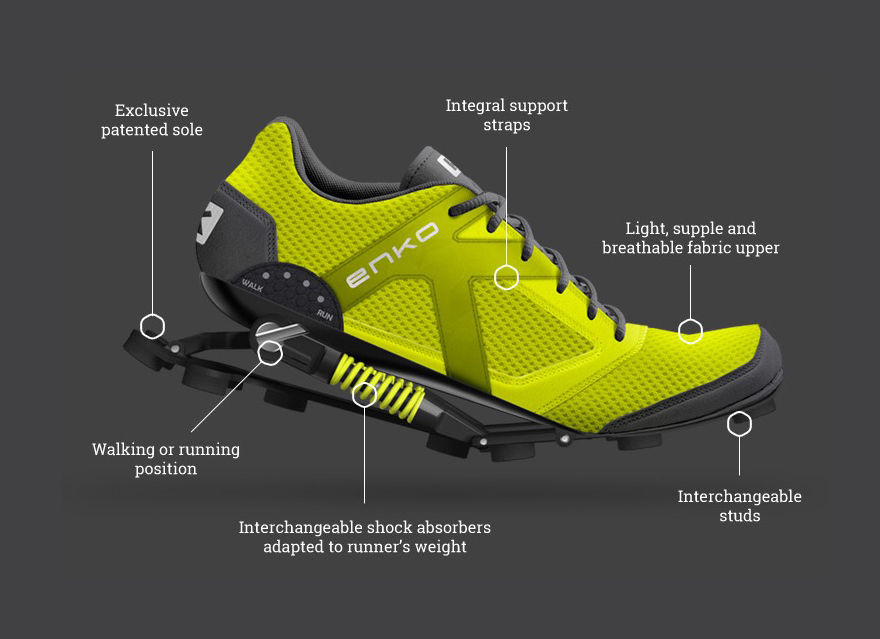 I'm skeptical, but very curious to see how these Enko shock-absorbing, energy-storing, foot-boosting running kicks come out. Skeptical because of...well, watch the quick video below:

The camera doesn't go down below the waist, does it? But if they do actually work, well, who wouldn't like to get better mileage on less gas?

The developed is France-based Christian Freschi, a longtime runner who's been working on the design for 12 years and who is referred to as possessing "genius" on the Enko website. As for how the shoe is meant to work:

The shoe adjusts to the weight of the runner, to his running style, and to whether he is a pronator or a supinator. With its double sole and a design aimed at avoiding injuries, it provides total comfort.

Maybe I've been brainwashed by Nike and Adidas into thinking that only large corporations have the scientists on tap to create new types of footwear, but I want to see, like, CG video of X-ray skeletons running around in these, with little blinky arrows indicating forces on the the tendons, ligaments and joints. Failing that I'd settle for video of the actual shoe being used.

It's possible Freschi will release more information later—the Enko is slated to go up for funding on Indiegogo come February.