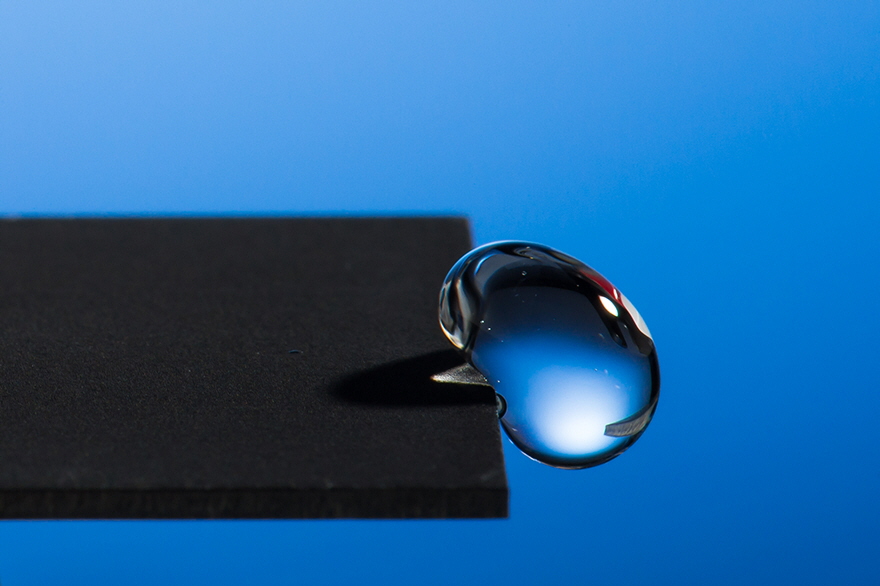 Scientist Figures Out How to Use a Laser to Make Metals Permanently Waterproof!

Hitting metals with a laser to make the metals turn black doesn't sound very sexy. But for Dr. Chunlei Guo, a professor of optics at the University of Rochester, it's normal research. The ability to turn something dead black, which will thus absorb all light, is of optical interest.

However, Guo discovered something else could be done with these tools. By using a laser to etch microscopic patterns into the surface of the metal, he found that water was super-attracted to the surface—it just gets sucked onto it, as you'll see in the video below. Curious to see if he could create an opposite effect, Guo then managed to laser-etch the metal such that water could not stick to it. "The material is so strongly water-repellent, the water actually gets bounced off. Then it lands on the surface again, gets bounced off again, and then it will just roll off from the surface," Guo explains.

Unlike a Teflon coating, Guo's technique means the metal itself is actually rendered super-hydrophobic, no coating required. This means Guo's treatment cannot be rubbed or worn off. And while dust and dirt can still stick to the surface, a droplet of water rolling across it will pick it all up, like the ball in Katamari Damacy. The result is super-easy-to-clean surfaces.

Guo has attracted the support of the Bill and Melinda Gates Foundation, who see applications to improve sanitation in developing countries. But there are still significant obstacles to overcome before the technology can be rolled out and applied:

It currently takes an hour to pattern a 1 inch by 1 inch metal sample, and scaling up this process would be necessary before it can be deployed in developing countries....

Guo and [colleague Anatoliy] Vorobyev use extremely powerful, but ultra-short, laser pulses to change the surface of the metals. A femtosecond laser pulse lasts on the order of a quadrillionth of a second but reaches a peak power equivalent to that of the entire power grid of North America during its short burst.

That sounds like quite the electricity bill, and Guo and his team are working on increasing the laser-patterning speed. They're also looking into applying the technique to materials other than metal. Along those lines, check out this research done at MIT with glass that has yielded similar hydrophobic qualities.