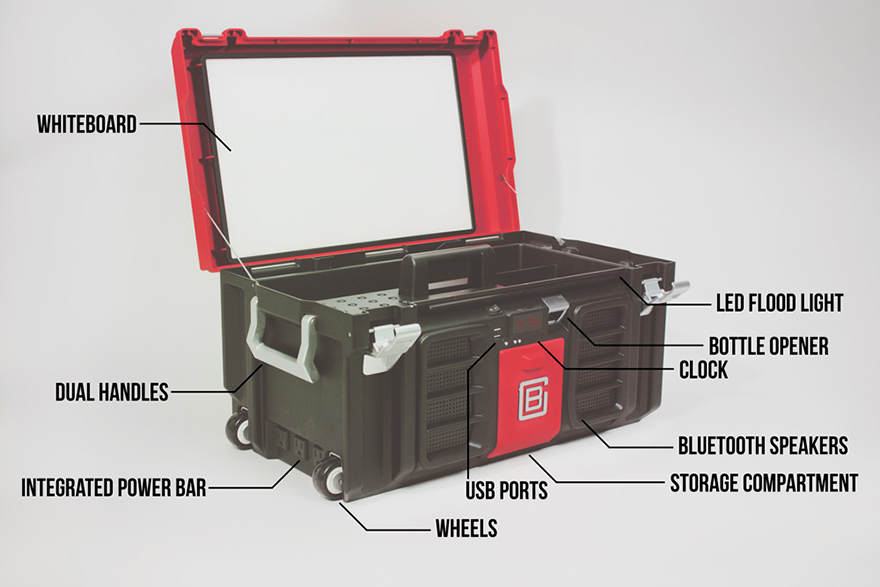 Despite an unintentionally hilarious product video, the Coolbox—billed as "The world's most advanced toolbox"—has successfully, swiftly tripled its funding target on Indiegogo. Before we get into this one, take a look:

First off, I like a lot of the ideas in the design, assuming you'd have the toolbox within arm's reach of your project: The whiteboard would be handy for jotting down measurements; the magnetic lid would help stowing fasteners you temporarily remove and then pop back in; the floodlight, on-board power and clock are all undeniably useful. For transport I'd like to see slightly bigger wheels that could easily roll over an extension cord, but small wheels are better than no wheels. And the handles on either side would make it easier to pull out of the trunk.However, other things leave me scratching my head. One is that they have an option to buy it with a $39 "high quality tool set" in matching colors—manufacturer unnamed. The folks I know that are serious about their tools typically don't purchase these kinds of everything-included sets.

Two is I'm unsure of whom the target market is. The phone dock atop the toolbox is neat, but guys in the trades will tell you that the number one problem on a jobsite populated by other workers is theft. Leaving the phone exposed up top makes it look like the golden monkey skull in the beginning of "Raiders of the Lost Ark," and some of your less-scrupulous co-laborers are going to start hearing that Indiana Jones music in their heads regardless of what you've got coming out of the speakers. Secondly, professional tradesfolk are typically not allowed to crack beers on the jobsite.

Three is I'm not sure what the intended setting is. A toolbox implies mobility; in a dedicated shop or workspace you'd have all of your tools in fixed storage, as well as (presumably) available power, a clock, a stereo et cetera. But the Coolbox is clearly designed to bring these conveniences with you on-the-go. Perhaps it's aimed at lone handymen?

In any case, I'm not the arbiter of what does and doesn't make a toolbox design—the general public is, and they have voted resoundingly: At press time, $127,898 in funding in just four days! With 42 days left to pledge, this one is sure to go down in the crowdfunding history books.

And my ballbreaking about the video aside, these guys aren't trying to win an Academy Award; they're putting their time into trying to release a product that people like, and presumably can use.

Seeing as we're supposed to be industrial designers, or at least industrial design savvy: What do you guys and gals like or dislike about the design, and what context do you see it being most useful in?