Jaasta: Is This E-Ink Keyboard (Finally) The End for Time-Honored Design Tradition? 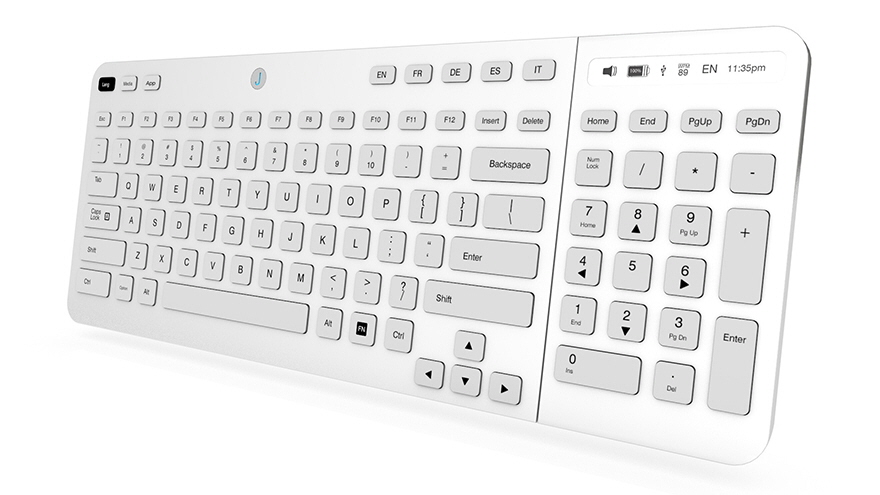 UPDATE – Beware! Promising as this concept seems, you'll notice that there is no working prototype. Redditors have uncovered that Jaasta may be the creation of the scammers behind the too-good-to-be-true Scribblepen – with many backers losing money through crowdfunding site CrowdTilt. It seems keyboard shortcut traditions have got some life left in the yet.

There's a certain respect afforded to the rare designer who has reached the highest levels of keyboard shortcuttery—a masterfulness attained only when the self and the software (be it CAD or Adobe) become one. Whilst effortless key stroke knowledge of a chosen tool can be achieved through years of dedicated daily practice—young devotees required to spend many consecutive days and nights in intimate communion with their keyboards in pursuit of perfection—only true touch typing demi-gods can commit multiple program key combinations to memory, laying down one set and picking up another in the time it takes to switch between screen. This ancient art and time-honored tradition (handed down across generations for millennia decades) could, however, be about to fade into insignificance.

Jaasta is a promising customizable E-Ink auxiliary keyboard soon to run the gauntlet of a crowdfunding campaign. Whilst customizable keyboards are really nothing new (see '05, '09 and '13) this challenge to QWERTY conformity— simple and use-case driven in it's vision; enabled by rapid developments in E-Ink technology—could be the most convincing yet.

Ok, it's not revolutionary, but the Jaasta does look like it could shake up your workflow. Customisable to display shortcuts for a whole host of applications—switching between them on voice-command no less—Jaasta could make shortcut memorisation a whole lot easier. The customizability of the keyboard offers further finger optimization with the ability to get rid of keys you don't use and replace them with ones you do, or add in a duplicate for those you rely on most regularly. To add accessories to the accessory, the number pad is interchangeable (and indeed removable) with a trackpad or drawing tablet extension.

For the polyglots, the board has 50 international keys pre-programed to be switched between instantly (man, imagine the potential for translators). This of course will unfortunately not solve the problem of rocking up in an internet cafe in foreign roman-alphabet-sharing country where 'M's are infuriatingly exchanged for semi-colons—but it may help you prepare for the inevitability.

ID-wise, Jaasta follows in the Kickstarter hardware tradition of a mock-Apple aesthetic—a slim-line, rounded corner form, boasting a number of colour combinations between white, grey and black, as well as a slightly gaudy gold. We'll have to wait for the video pitch to see the details.

If this thing does make it through crowdfunding (and the purgatory of post campaign mass production), would you trade in your hard earned powers of recall and muscle memory for the ease of E-Ink?

Jaasta: Is This E-Ink Keyboard (Finally) The End for Time-Honored Design Tradition?