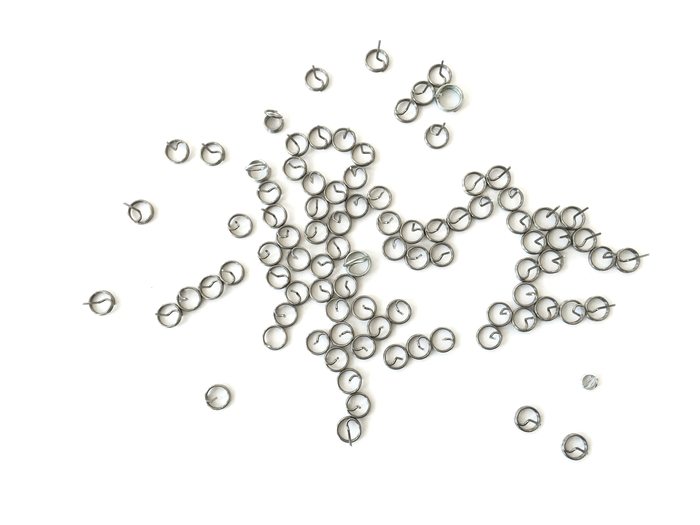 Last year we saw the Pinclip, a combination paper clip/thumbtack, which allows you to affix papers to a corkboard without actually puncturing the paper. Alas, it was Japanese-market only. But now Chicago-based designer Mark Weiser has designed something similar (and got an earlier start than the Japanese product, see further down), which will not only be sold in the U.S., but is actually made here.

Weiser's design is called the Pon. Have a look:

We asked Weiser if his design followed the Pinclip. Here's his response:

Thanks for the question. I completely understand why you ask that, and the short answer is not at all. If you want reassurance, you can reach out to my former professor Bruce Tharp, who I know has been a contributor to Core77. I showed him this concept sometime last winter, and I believe the pinclip was released this past summer.
I've been working on Pon for the past 2 years and have been prototyping around this particular form since the winter of 2013/2014 when I showed Bruce the design. When I was doing patent research I saw the pinclip and I knew that I was going to have to deal with the similarity somewhere down the line. I came up with that concept myself as well when I was prototyping, but came to the conclusion that the [Pinclip] form is a bit kitchy and doesn't function as well as the coil (plus it's not patentable as it was already patented sometime in the mid 1990's).
I needed a solution that was just as simple as a push-pin that could achieve this flexibility and strength. I've worked over the last year prototyping, getting a provisional patent, creating my entire Kickstarter almost solo (some great friends helped with the video) and now I've launched.

At press time the project was 75% of the way to reaching its $10,000 Kickstarter target. If you'd like to make it happen, you've got just under a month left to pledge!