As we saw in the rooftop snow removal post, getting rid of the white stuff provides unique design challenges for individual snow-clearers. And those challenges grow exponentially when spread over the community level. When entire towns and highways are buried under snow, local officials are tasked with an economic problem: How can we remove as much snow as quickly as possible while using the least amount of resources? Every hour of every day that a road remains unplowed, the local economy suffers; yet there are only so many plows, drivers, and fuel to spare, and there may be another storm coming next week, meaning resources have to be carefully managed.

When the storms start to stack up, traditional snowplows start to look like a hopelessly inefficient investment. Consider a local government tasked with clearing a multi-lane highway, and using this typical solution: 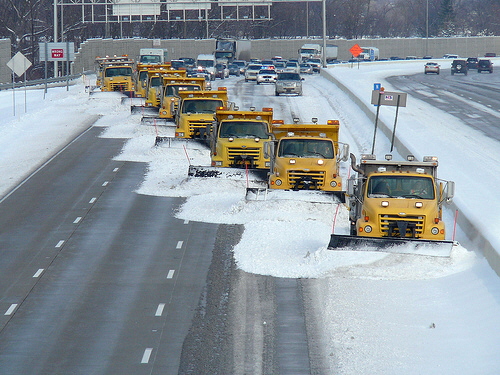 You've got to pay for all of those trucks, their maintenance, the fuel that goes into them, the wages of the drivers, the time it takes to gas each of those trucks up, et cetera. And having five or ten drivers tied up in one location means there are dozens of other locations left unattended. Plowing the highways isn't much good if there's no one left to plow the local roads leading to the highways.

Enter Bob Lannert, an engineer for the Missouri Department of Transportation in the '90s (and the guy who took those frozen balloon photos). Lannert's a man with a background unlikely to be duplicated by America's latest generation: Raised on a farm, Lannert worked his way through engineering school as an ironworker. This gave him an insight into 1) farm machinery, 2) engineering and 3) building things out of metal, and this cocktail of experiences made him the perfect man to solve this problem. Here's his solution, called the TowPlow: 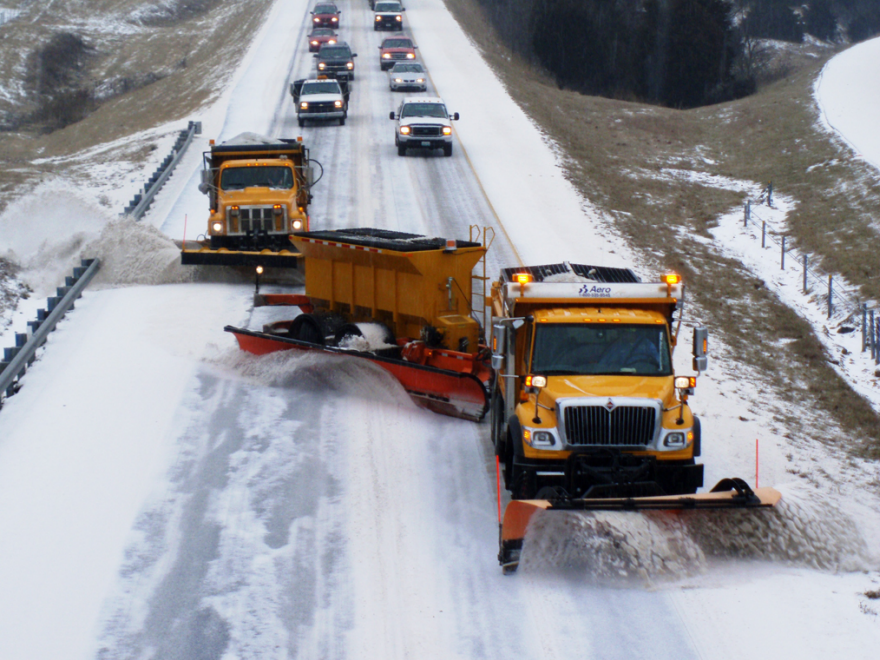 What you're looking at is a towed unit hitched to a regular plow. During ordinary travel it rides in a straight line behind the truck—"I want to be able to go through a 10 foot tollbooth," Lannert told Kansas City Public Media—but when the driver flips a switch, the wheels can be steered to the side at up to a 30-degree angle.

Once the unit is fully deployed, the single driver has effectively increased his clearing width by 250%. This means one man can now do the work of two, with a fuel savings, and your total fleet of drivers can be spread to cover more areas of the community. 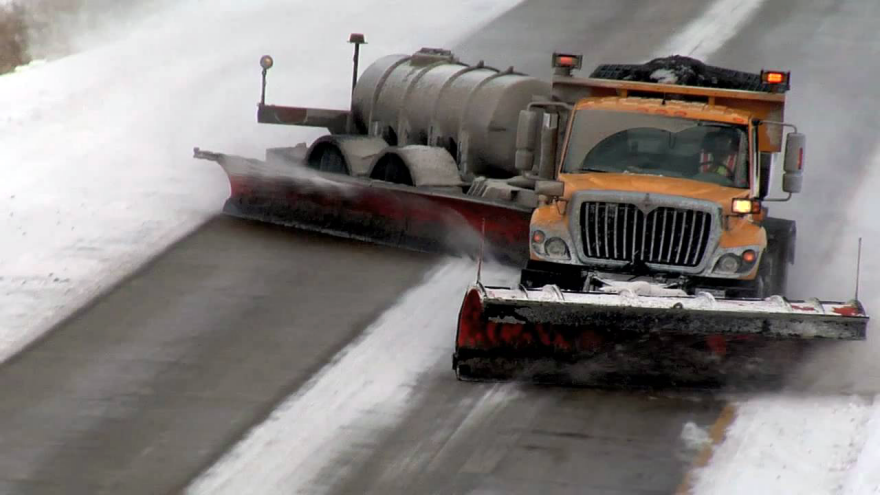 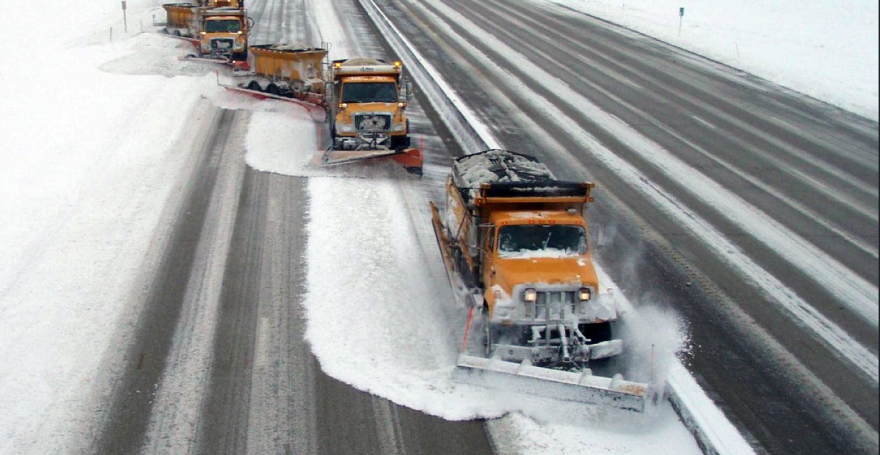 The TowPlow carries tanks filled with salt brine (which will not freeze), and these serve as ballast to keep the wheels in place. The contraption can safely be dragged along at 55 miles per hour, and can also be fitted with salt-spraying hoppers to do double duty. 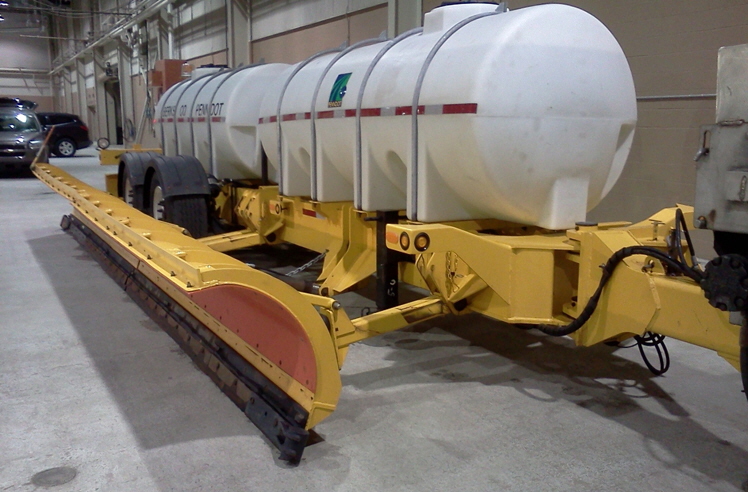 In the '00s, after experimenting with two lawnmowers on his farm--one pulling the other one behind and slightly to the side of it—Lannert was convinced his concept would work and patented the idea. He then convinced Canadian manufacturer Viking-Cives LTD. to begin producing them, with a classic sales pitch: "During an evening dinner when visiting the Ontario plant," writes trade publication Equipment World, "[Lannert] drew the idea on a table napkin."

“Ninety percent of engineers I talked to said it wouldn’t work because it was too big,” Lannert said. Other naysayers said, “it can’t be stable,” or “it can’t plow in deep snow.”

Despite whatever skepticism Lannert had encountered elsewhere, Viking-Cives bit, releasing the first TowPlow in 2005, and it quickly became a hit. Today the DOTs in Alaska, Indiana, Kansas, Maine, Minnesota, Missouri, North Dakota, Ohio, Pennsylvania, Tennessee, Utah and Wisconsin all use TowPlows; up north, the Canadian provinces of Alberta, New Brunswick, Ontario and Quebec have all added them to their fleets as well.

The units aren't cheap—we found conflicting sources online indicating they cost anywhere from $67,000 to $100,000—but with states spending millions of dollars on diesel fuel each year to clear snow, the TowPlow is still a no-brainer investment. "TowPlows can pay for themselves the first year in many states," the company claims, and the math adds up: While it increases the fuel consumption of the vehicle towing it by 10-15%, that's still an 85-90% savings over having two vehicles do the work.

Lannert's home state of Missouri now has more than 130 TowPlows in their fleet, and found that they do such a good job of clearing the snow that less salt needs to be sprayed on the roads. That also adds up to a savings. "For every ton of salt we don’t use in the winter, that’s a ton of asphalt we can use in the summer," Missouri DOT Maintenance Superintendent Mike Belt told The Missourian, pointing out that the two materials have similar pricing.

As for Lannert himself, he retired from the Missouri DOT in 2007 after putting in 34 years of work. He now runs self-founded civil engineering firm Snow King Technologies, where he continues to tweak the TowPlow's future iterations, consult with Viking-Cives, and still trains TowPlow drivers personally. And he credits his background, particularly his familiarity with farm equipment, with his success: "[The TowPlow] would not have happened if I had not been a Missouri farm boy who learned that one can no longer compete by using four-row planters."

Here they are in action: