Blowing Glass Into High-Performance Pillowcases, or How Bocci Created Its Cloudlike Pendant Lights

This is the latest installment of In the Details, our weekly deep-dive into the making of a new product or project. Last week, we talked Tube Clocks with Piet Hein Eek.

For Omer Arbel, design never starts with an idea. “Our approach to making stuff always has to do with inventing new ways of fabricating using existing equipment or re-calibrating existing manufacturing techniques,” says the creative director of the Canadian lighting company Bocci. “I never start with an idea of what something should look like or what it should do; I just walk into workshops.”

The latest result of this tinkering-first approach is Bocci's 73 series of pendant lights, featuring clusters of delicate, cloudlike glass forms suspended on thin metal cords. The project began after Arbel coerced a pilot friend into showing him his airplane. “That’s how I usually end up in these situations,” Arbel says. “My friend is showing me the engine and there’s this fabric bag—you sometimes see them in Formula 1 racing, these very beautiful little woven baskets. It struck me immediately. It was pristinely white in this engine of all gray or black pieces.” 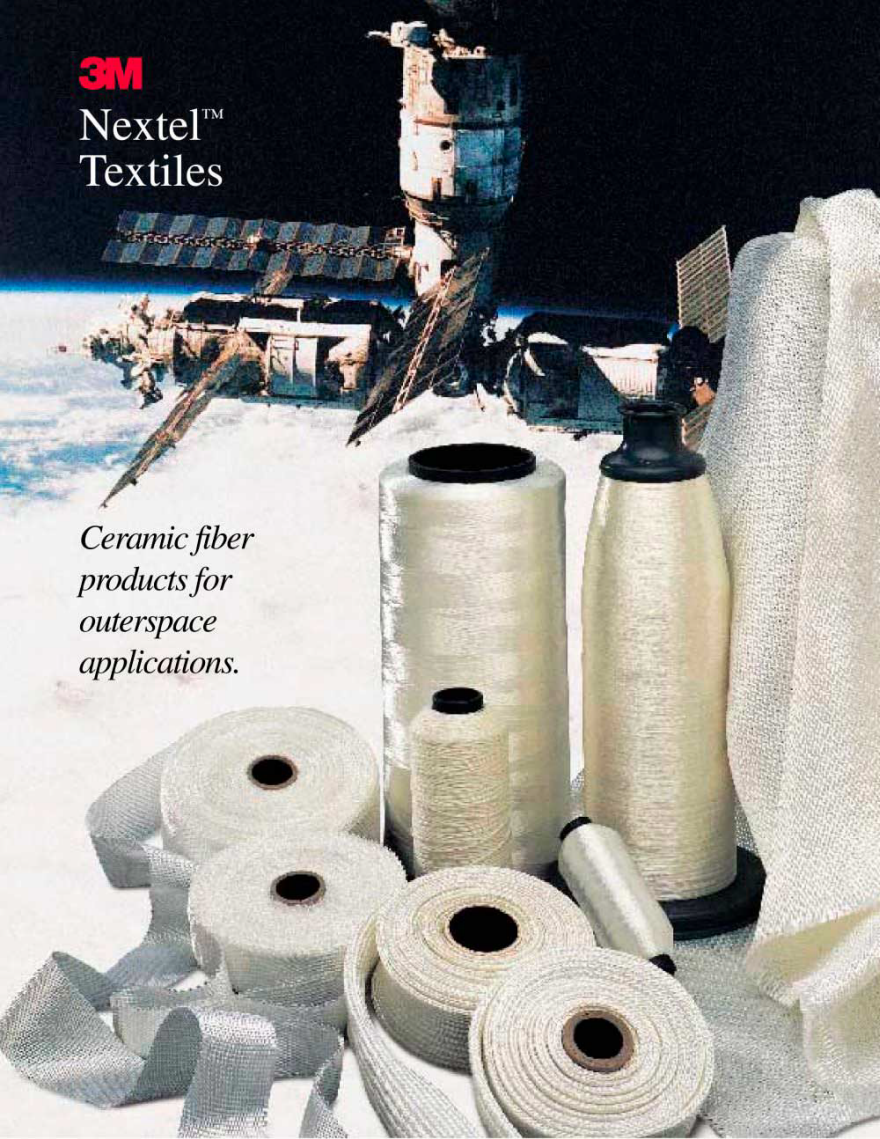 The pristine white basket was constructed of 3M Nextel, a high-grade ceramic fabric developed to handle tremendous amounts of stress and heat, including rapid changes in temperature. Like so many high-performance materials, the fabric was initially used to protect NASA space shuttles and satellites, selected for its strength, fire resistance and very necessary ability to withstand meteoroids.

Needless to say, Arbel’s interest was piqued. “We have a glass shop and the temperatures are around 1500 degrees Celsius,” he says. “Anything that can withstand that kind of heat immediately catches my eye.” After doing some research, he purchased an entire roll of Nextel and sent it to his shop, where his team quickly set about learning how to work with the industrial material. An early challenge was simply cutting and sewing the fabric. “You need very special shears and you have to cut with the grain,” Arbel says. “You need the thread to be exactly the same material, otherwise it burns. These things all took a while to figure out.” 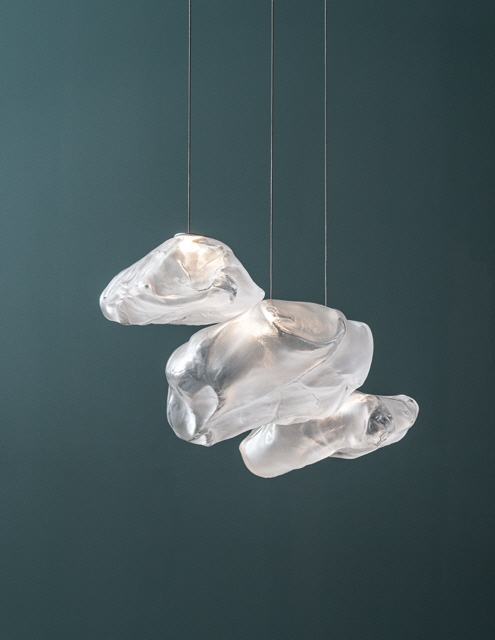 Once the team understood how to work with the material, the project became an exercise in upholstery. Arbel decided on pillowy forms for glass to be blown into—resulting in those cloudlike shapes—and tasked his team with sewing the ceramic fabric into a series of loose structures. “That simple concept took months and months to figure out,” he says. “It became very important that [these forms] remained quite loose. If the glass completely filled a taught pillow shape, it would mean that every piece looked the same, so we left a vast excess of the fabric with each pillowcase.”

With that variation in mind, the team created an array of slightly differing pillowcases from the material. Then a glassblower placed a small bubble of glass with thick walls into each case, for controlled, yet unique, glass forms. A bed of sand was created to support the form, providing just enough structure to “not make a mess,” but enough to support the glass and give it the freedom to move freely within the fabric case during the glassblowing process. At the right temperature, the glass form expands, taking the shape and texture of the fabric volume around it. Once the glass cools to the point where it is able to retain its form, the pillow is stripped away and the glass is placed in an annealing oven, where it gradually cools to room temperature over 12 hours .

From there, it was a matter of figuring out how these forms would attach within a system to create a light fixture. “Instead of sourcing or just buying parts, we pride ourselves in making all our own hardware for each of our lights,” Arbel says. “It’s hard and the approval process is very difficult, but—for us—it’s worth it. If we were limited by what we could buy off the shelf, we would be doomed.” Arbel and his team had to create four size variations of the hardware to hold the variously-sized glass pieces—and he says that the hardware used for the 73 series is Bocci’s most sophisticated and complex yet: “The component had to create diffuse light and suspend an organic piece of glass with a variable center of gravity and weight—all while appearing elegant and visually subtle.” 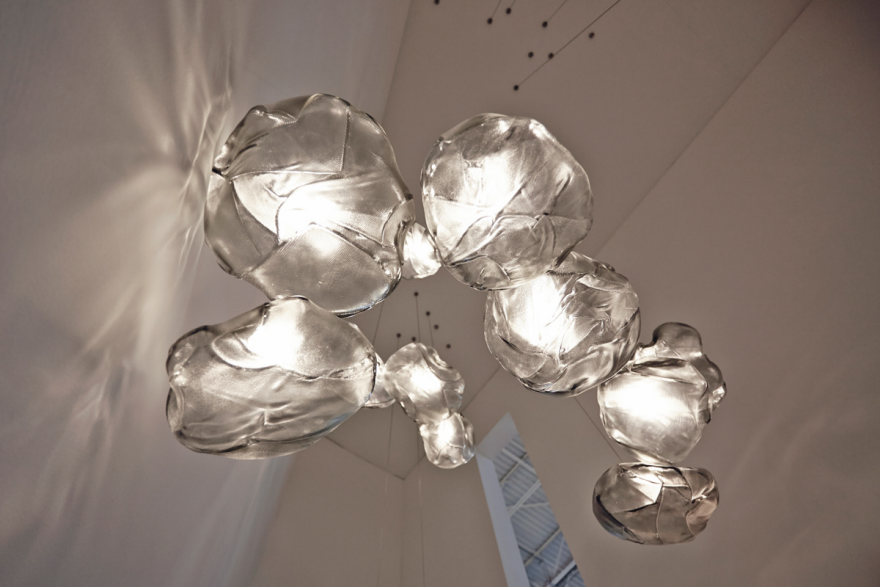 Achieving the right quality of light was another challenge. “It was important to me that the glass shape be filled with a diffuse and non-directional light—as if the glass was a container, full of liquid light,” Arbel explains. “If there is any light that has a direct point source, it destroys the magic.” Deciding to work with LEDs just made things more difficult, given their color temperature and limited dimming abilities. “These are both things you really need to make a magical light, so you’re going into the ring with one hand tied behind your back.”

Ultimately, the Bocci team decided to go with a hemispherical lens inside the light, paired with a doughnut-shaped lightbulb of their own creation. As Arbel explains it, this was a matter of making the light feel “present”—but not too present. “That part of the project I consider almost etiquette,” he says. “It’s having good manners. It is supposed to do what it is supposed to do and let the rest of the piece exist. It’s like a well-tailored suit.”

The final piece is hung as a group, in small or larger clusters, and will go on sale starting in April.