This is the second of our ten Tech Specs interviews. Previously, we talked to Bresslergroup's Thomas Murray.

Background: I got a B.A. in graphic design and fine art at Azusa Pacific University, worked for a few years, then went to Art Center College of Design for a B.F.A. in graphic design. At Art Center, I started with a motion-graphics emphasis but then began learning to code and moved more toward interaction design, and starting to meld installation and interaction together. That’s how I ended up at Local Projects—I’ve been here for just over a year.

Computer setup: At my desk I have a 27-inch iMac, which is pretty standard issue for the graphic design department, plus my own personal 15-inch MacBook Pro that I use for meetings. They’re both 2011 models, and in my MacBook I swapped out the optical drive for an SSD so I can run it a lot faster. I also have a vertical external monitor that I put next to the horizontal iMac—so my e-mail, calendar and web stuff is on the vertical monitor and then I do all my design work on the iMac screen.

Other than that, I use a wireless mouse—the two-button, wheel style, not a Mac mouse—and I have my headphones. That’s about it.

How much of your workday do you spend in front of the computer? It varies, but somewhere between 50 to 90 percent of the day. As an art director, I do a lot of walking around to visit the different designers whose projects I’m overseeing—sitting with them at their computers or in meetings, brainstorming and working through ideas. But on some days I’m doing heavy production work, not talking to people, and then I’m in front of my computer most of day. 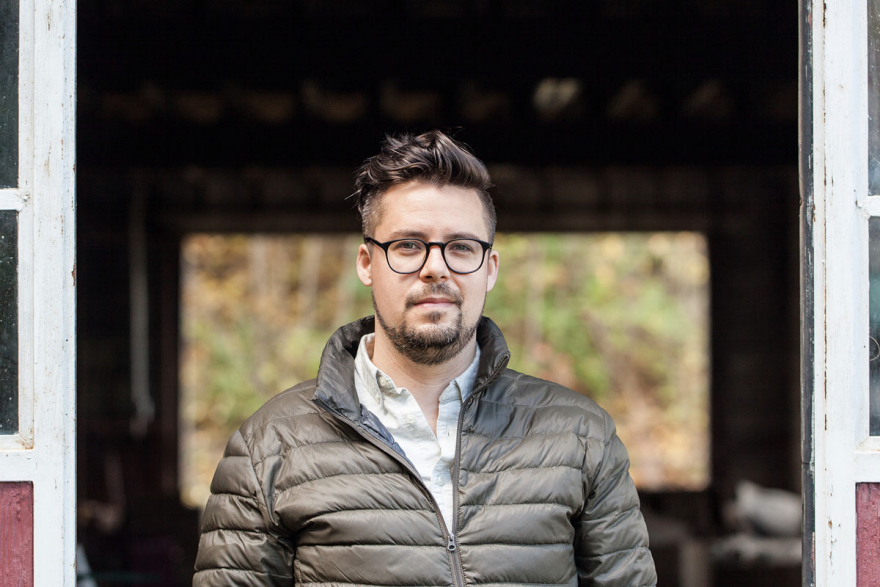 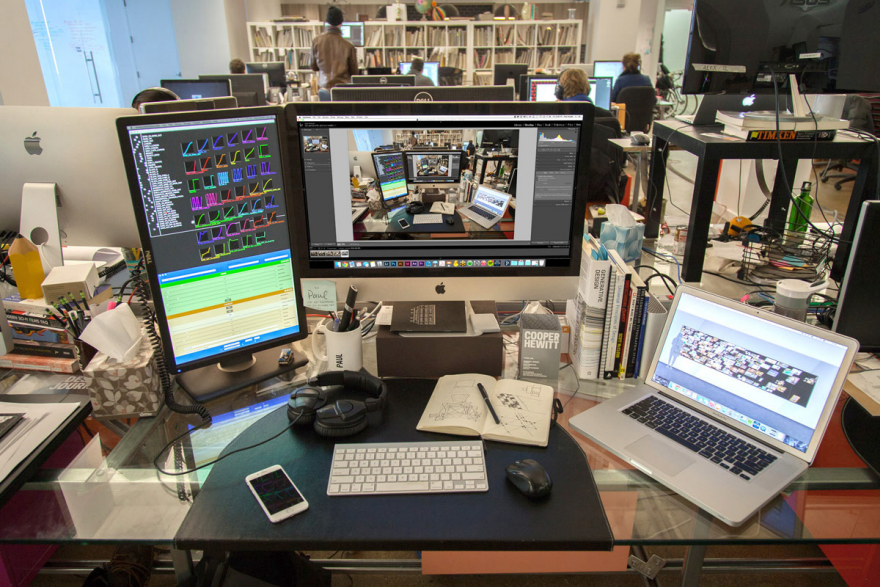 Most used software: I use Adobe Illustrator most heavily. After that, Keynote, which is basically the Mac version of PowerPoint. We use it for client presentations, bringing together all the graphics from our designers. Keynote also does a great job of making rough animated prototypes of our wireframes, so we can say, “If someone taps here, then this happens.” It’s faster than animating everything in After Effects and rendering out into video—and it’s a lot more flexible because we can iterate on it. But I do use After Effects as well, and then Photoshop would be the other big one.

Software that you thought you’d use more often than you do: Processing. I know it and use it sometimes, but for a place that does so much interactive work, I thought I would be using it more. It turns out that the developers here as so good at what they do that it’s much more efficient for them to handle this work than for me to do it.

Apps that are actually useful for your work: We use Basecamp for our project management, and I use the app for that—it’s decent. I also use the Sonos app for our office speaker system and playlists. And the app that I rely on when I really need to focus is called SimplyNoise. It’s just different colors of noise that I play through my headphones to drown out everything else.

Other devices: Nothing, really. I don’t have a Wacom tablet or anything like that.

Other machinery/tools in your workspace: We have a mock-up room that’s a mashup of different things. Sometimes it’s full of projectors and monitors; other times there’s someone in there with a saw, making some weird, rigged-up projector mount. I do wish we had a proper shop—that’s on my wish list of things I hope we can get soon, because we are moving toward doing more architectural design, and being able to build things in 3D with real materials would be super helpful. Hopefully we will be able to make it happen soon.

Tools or software you’re thinking of purchasing: It would be great to get a big plotter to do full-size graphics. Also, a laser-cutter and a 3D printer for more material kind of stuff. Those would both fall under my shop wish list. 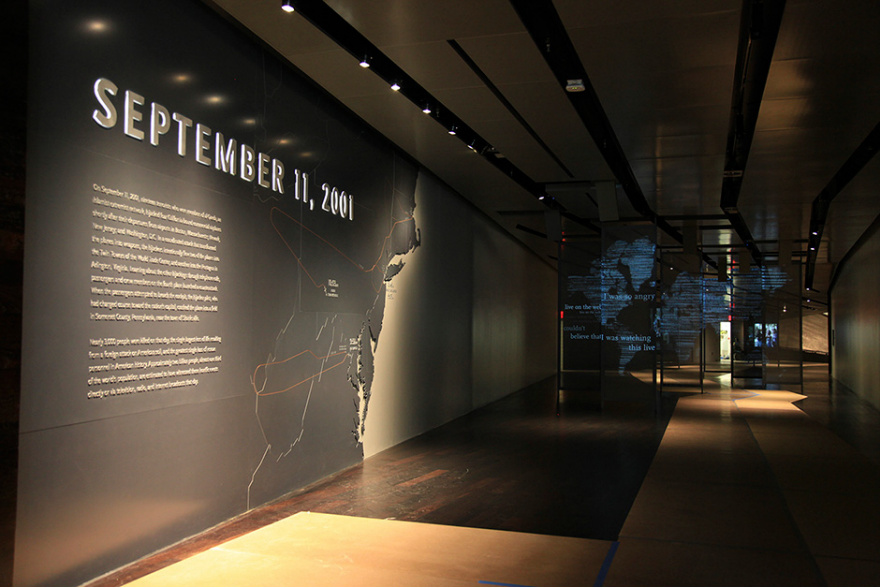 Local Projects has done several projects for the 9/11 Memorial Museum in New York City, including a custom software application for the arrangement of names on the memorial. 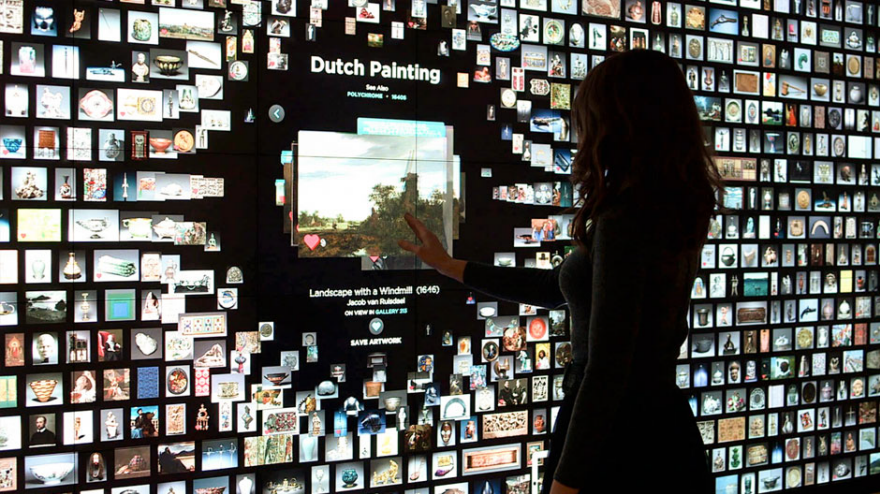 For the Cleveland Museum of Art, Local Projects created Gallery One, a suite of new interactive installations.

How has new technology changed your job in the last 5–10 years? Ten years ago, I was doing mostly installation art; I was really interested in augmenting physical spaces to create meaningful experiences. So I would basically make videos and project them—there wasn’t a huge amount of interactivity, other than people moving through the space. In the last five years, as programming and interaction design has become more accessible, that’s really opened up ways for me to get involved with that.

Most recently, that would be the advent of programming language like Processing or vvvv for prototyping through code and patching. Being able to prototype and design through code and see the results immediately is something that has really grown a lot recently, and it leads to design solutions much more quickly. In the past, that kind of thing was possible but a lot less accessible. So that has really changed the way I work.

Do you outsource any of your tech tasks? When we’re doing more 3D architectural design—which is a relatively new area for us—we will outsource work to different fabricators, to get samples of materials and to build small-scale prototypes. Like I said, we don’t have room for a proper shop in-house, so that’s work we have to outsource for now.

We also outsource our A/V hardware and installation—so when we’re installing a huge monitor wall, we’re not the ones going out and buying the monitors and so on. We do oversee that process really closely, however; we’re in constant communication about the specs and how the hardware will work with the software. And we get test models in the studio. But at the end of the day, someone else is handling the nuts and bolts of actually installing that stuff.

Being able to prototype and design through code and see the results immediately is something that has really grown a lot recently, and it leads to design solutions much more quickly. In the past, that kind of thing was possible but a lot less accessible.

What are your biggest tech gripes? I think this culture of cool new technology is causing us to become a little myopic. The technology is fascinating and it allows us to do what we do—but if that becomes the focus of the work, instead of thoughtful ideas and compelling stories, then we’re missing the point of why we’re designing and who we’re designing for. So my biggest tech frustration would just be when the technology gets in the way of the story or the human aspect of the design.

And on a more day-to-day workflow level, one minor gripe would be keyboard shortcuts across Adobe programs—they don’t line up. Some are the same and some aren’t, and when you’re jumping around between different Adobe software all the time, that can get very annoying.

What do you wish software could do that it can’t now? Do my job for me? It’s funny, because some clients think that’s how it works already: “Oh, just throw it in there and it will be great.” And it’s like, “Uh, no, there’s not a button that says ‘Design it’—the computer doesn’t just spit it out automatically.”

Finally, we've all had instances of software crashing at the worst possible moment, or experienced similar stomach-churning tech malfunctions. Can you tell us about your most memorable tech-related disaster? As I mentioned, we outsource the final installation of certain pieces—but we’re always on-site during install, doing final tweaks for the interaction settings and the motion and that kind of thing. In one instance, we were on a project on the final day of installation. It was a large-scale touchscreen wall, and the way it was put together, the monitors were separate from the touch hardware. So the night before the client presentation, everything was working fine. Then we come in the next morning and the monitors are working but the touch isn’t working at all, and we can’t figure out what’s wrong. There was no reason for it to just stop working overnight. It was a real freak-out moment, like, Why isn’t this working? What happened?

Finally, we came to find out that the building was still kind of under construction, and one of the construction guys had leaned his ladder against our wall to reach something higher up. He didn’t lean it against the actual monitor, but against the frame right above the monitor—not realizing that was our infrared-emitting frame, which shoots an infrared field across the whole monitor and reads where users’ fingers are for the touchscreen functions. So the guy thought he was leaning his ladder against a normal frame when, in fact, it was this very delicate LED infrafed hardware. It took us forever to figure out that he had knocked out our touch hardware—and, fortunately, once we figured it out we were able to fix it before the client presentation. But it was a close call.