This is the sixth of our ten Tech Specs interviews. Previously, we talked to Ammunition's Victoria Slaker.

Background: I grew up in the Detroit area and went to the College for Creative Studies, where I studied transportation design. I interned here at Chrysler and was eventually hired in June 2000. From there, I worked in a series of different departments at Chrysler and Dodge, spending a few years at each stop. Eventually, I moved to Jeep, where I spent the longest part of my career; I think I was there for six years. And then three years ago I moved here to Ram.

Computer setup: We work off laptops here—my current version is an HP ZBook. When I first got it, I was worried that it wouldn’t be as powerful as my desktop was, because we run software that requires a lot of RAM, but the ZBook actually does quite well. 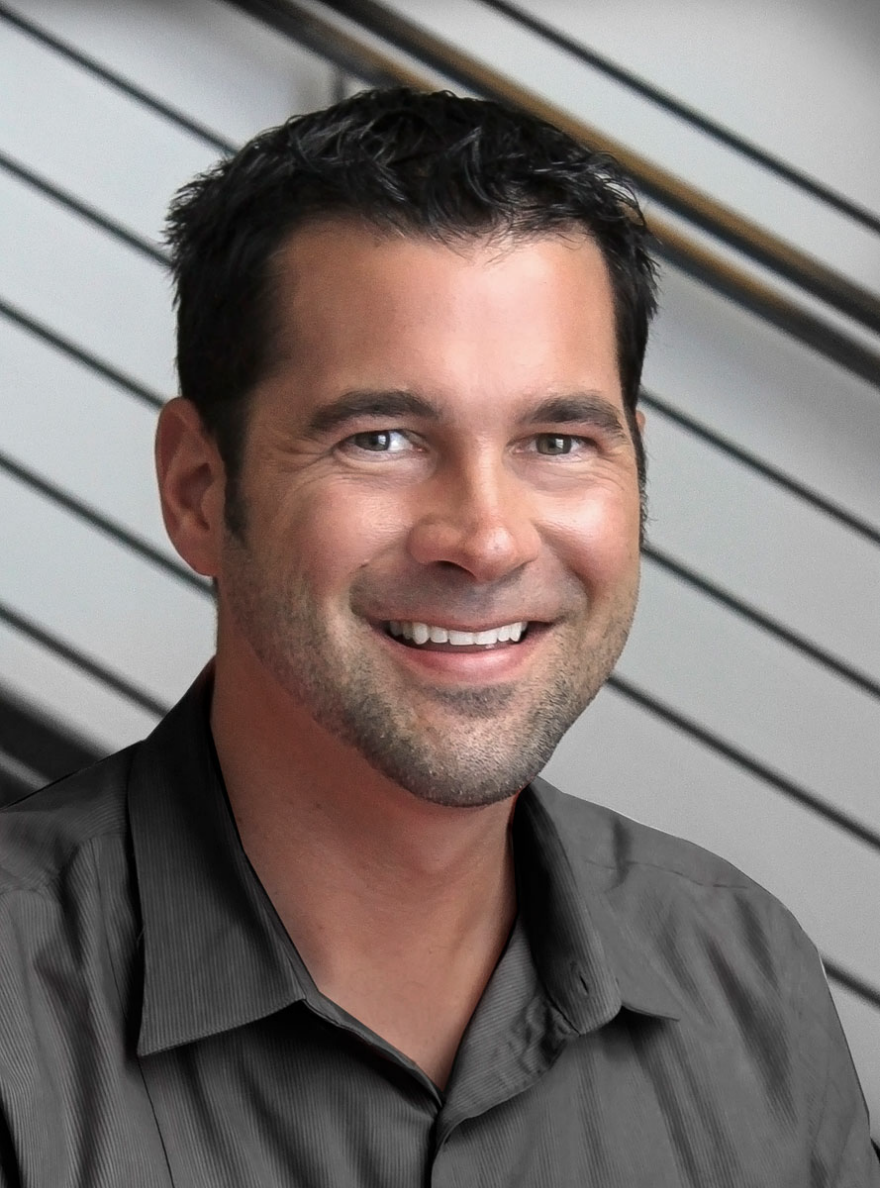 I have that in a docking station also made by HP, and then that goes into a 36-inch monitor. We went to bigger monitors because we have a fairly impressive animation room that has a big movie screen, and we found that on our smaller monitors we were thinking everything looked OK—and then we would get into the animation room where it was blown up to 50 times the size, and the images were starting to not be as resolution-positive as we thought they were.

Aside from that, I have a Wacom tablet—the Intuos 4. Most of the younger designers here are using Cintiqs, but I still use the old-school tablet because it’s what I was trained on.

And then outside of my office, there is a huge array of digital and analog tools in-house. The facility we work in is actually the second largest building in the U.S. To give you some sense of scale, the wind tunnel is three-quarters of a mile from where I’m sitting now.

How much of your workday do you spend in front of the computer? I’d say seven hours. But a lot of that is because the computer goes along with me to meetings and things like that.

Most used software: The first would be Alias Design and Alias Surface 2015. That’s followed by V-Ray 2015, which is another Autodesk program. And then after that, because I’m managing a lot, I use Microsoft Outlook a tremendous amount for e-mail. I don’t answer my phone, so I really encourage people to e-mail me, because I can write back during meetings.

Software that you thought you’d use more often than you do: Adobe Illustrator. I got trained on it and then I had to put it down for a number of years, and Illustrator is so complicated and it’s such a deep program that once you don’t use it for a while, it’s one of those that you forget where things are and how to use it. So I don’t use it quite as much as I would have hoped and was trained to do. That’s one that I miss more than the others. 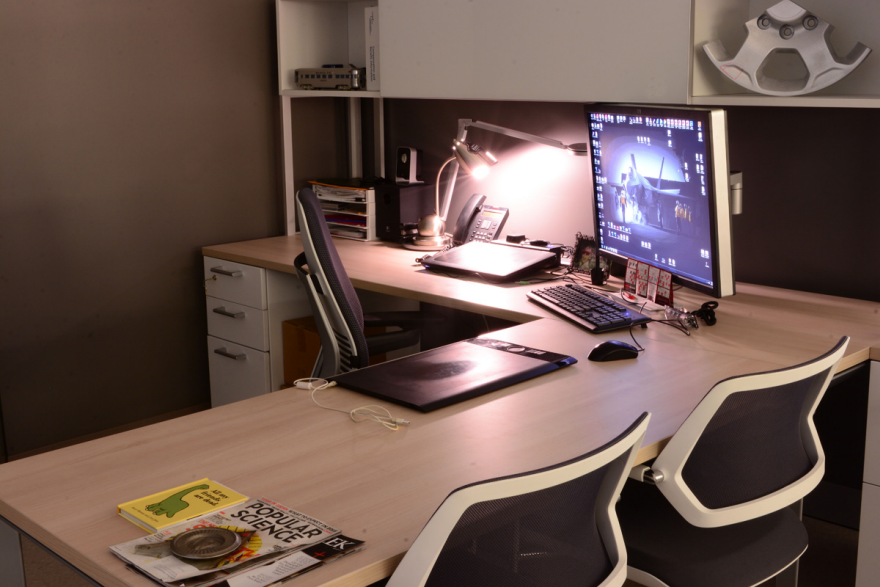 Phone: I sort of hesitate to tell you this, but I have a BlackBerry Curve for work. I used to have a “good” BlackBerry, relatively speaking, and I jumped in a lake with it, so now I’m back to the Curve. We’re supposed to be getting new phones soon. But the Curve is fine because it fits in my pocket and mostly I just use it for work e-mail.

Favorite apps: Well, there aren’t any apps on the Curve—but anything I don’t have here I have actually bought for my wife, so she has an iPhone and an iPad, and that’s typically what I use when I get home. One app that I use a lot is The Detroit News, to keep current with things that are going on in the industry. Otherwise, I use the iPad to go on design websites—my favorites are Le Container, Autoblog and Jalopnik.

Apps that are actually useful for your work: I’m not very app heavy; I’m really more website heavy. I do go on Core77 and Coroflot quite often. The latter is more on the management side, looking for talent. It’s a lot better than when I graduated from school. You can see people from anywhere in the world and instantly look at their portfolios. We’re always looking for the best people.

Other devices: The rest of my setup is fairly analog. We just redesigned our offices, and they gave me a giant whiteboard. I used to do everything on sticky notes, because a lot of the work comes in very rapidly, but now I use this enormous whiteboard to keep track of everything that’s due or important, or things I’d typically forget about.

Other machinery/tools in your workspace: Other things in my cube: 8.5-by-11 paper, literally a Bic pen, AD markers, an X-acto knife . . . those are typically the tools of the trade as an industrial designer. The beginning of the process is still very analog. In the studio we have clay tools, and we have an entire woodworking shop in every studio, with band saws, table saw, jig saws, every woodworking tool you could imagine.

Then, beyond that, we have mills for the clay. And we do a tremendous amount of 3D printing. Those machines are all in our basement. We have an entire facility just for rapid prototyping, which we recently expanded by 100 percent. There are several 3D-printing machines down there, and they’re not the kind that you can buy online. They’re the real deal—the kind of thing where you can SLA the entire grill for a truck.

Tools or software you’re thinking of purchasing: Me personally—a snow blower. That counts as a tool. I also do want my own 3D printer, to play with at home. You could sit down and in 20 minutes make silverware—I think that’s fascinating. I was looking online at the MakerBot Replicator. But right now we’re at an extremely busy period for the studio, so I wouldn’t really have time to go home and use it. I’m going to hold off on that for now. 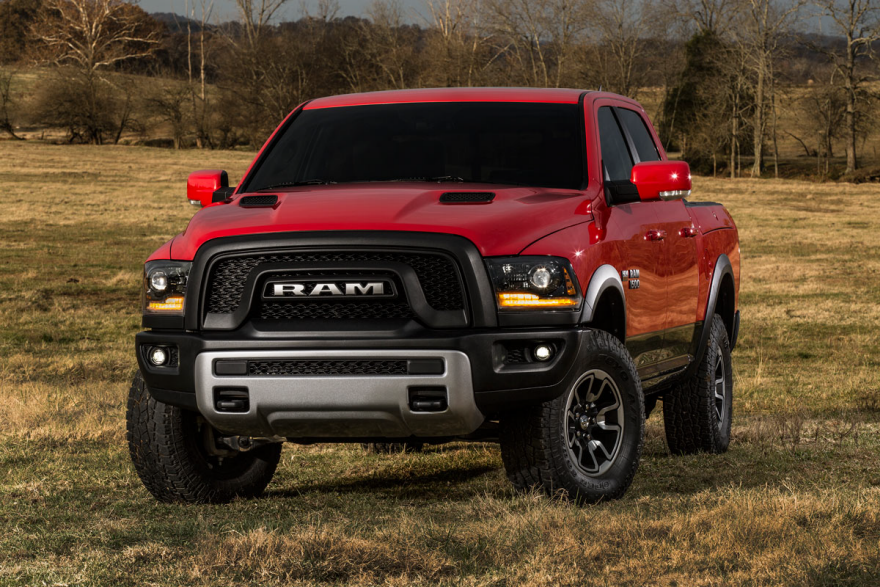 The 2015 Ram 1500 Rebel, introduced at the Detroit Auto Show in January 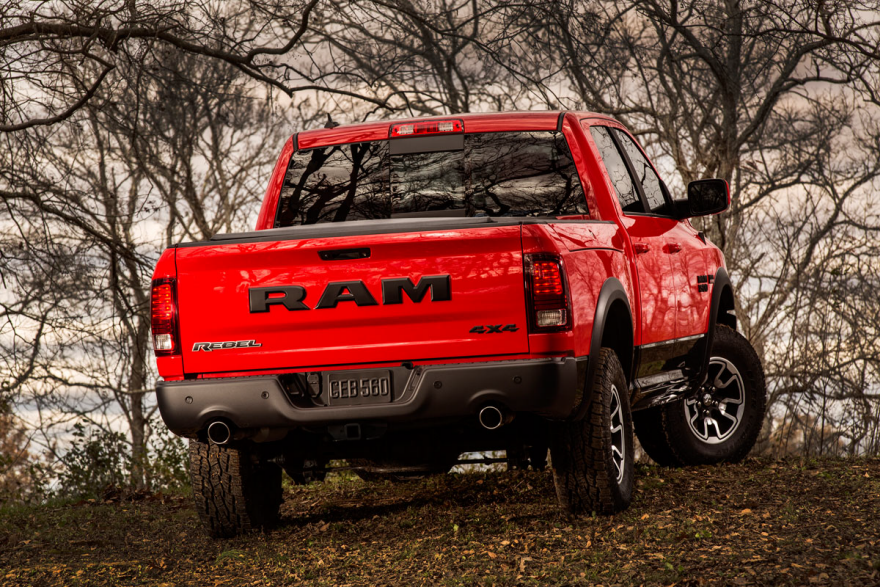 How has new technology changed your job in the last 5–10 years? More than anything, I think the technology that has changed our world and made our jobs a lot faster is laser scanning. So we can scan anything we want very quickly and then reproduce it. We scan our models every other night and take it to our data development area, where we basically have guys making the data that will be tooled to make the truck. It’s an exact picture of what’s out on the clay in the studio—right down to, if there’s a tape line, it will pick it up. It’s deadly accurate. It’s amazing how far that has come in just the last five years.

Do you outsource any of your tech tasks? Mostly, no. Very rarely, if we get overwhelmed in data development, we will outsource that to a contract house here in the Auburn Hills area. But that’s happened once or twice in the 15 years that I’ve worked here. The nature of our business is somewhat secretive and we try to keep everything inside and contained for the most part.

More than anything, the technology that has changed our world is laser scanning. We can scan anything we want very quickly and then reproduce it. It’s amazing how far that has come in just the last five years.

What are your biggest tech gripes? Overcomplicated computer software. I’m not going to name names, but there’s a program where there’s the tool in the program—and then there’s the tool from back in 2012. It’s the same tool, but in case people didn’t want to use the new tool, there’s the old one still in there. Things like that overcomplicate the program, so that when you try to move quickly, there are too many options. I hate that. A lot of this job is about speed and reproducing data and sketches and things like that, so anything that’s overcomplicated is not desirable.

What do you wish software could do that it can’t now? I was really worried about running Alias on a laptop, but now that I’ve seen that it can do it, I would love to see Alias on a tablet as well. I think that would be really cool. It would be that much more portable—then it would be something that I could take home and use just sitting on the couch. I can’t quite do that with my laptop.

Finally, we've all had instances of software crashing at the worst possible moment, or experienced similar stomach-churning tech malfunctions. Can you tell us about your most memorable tech-related disaster? About five years ago, when I was working at Jeep, I was running a desktop and the hard drive locked up. Normally, that would be fine—we have an entire tech department that’s awesome, they do a great job, and they back up all of our work. But in this particular instance, for whatever reason, none of my projects were being backed up. To this day they don’t know how it slipped through the cracks, but my last backup had occurred four months earlier. And all of the original artwork for the Jeep I was working on was trapped on that hard drive.

This was during the winter, and it got so desperate that they took my entire computer outside. Because the problem was a mechanical failure, the hard drive contracted enough to run for about 20 minutes and then it would overheat and lock back up again. They had to try several times to get the data off that way. In the end they ended up getting most of it, but those were some desperate moments. To reproduce all of that work, it would have meant rewinding four months.