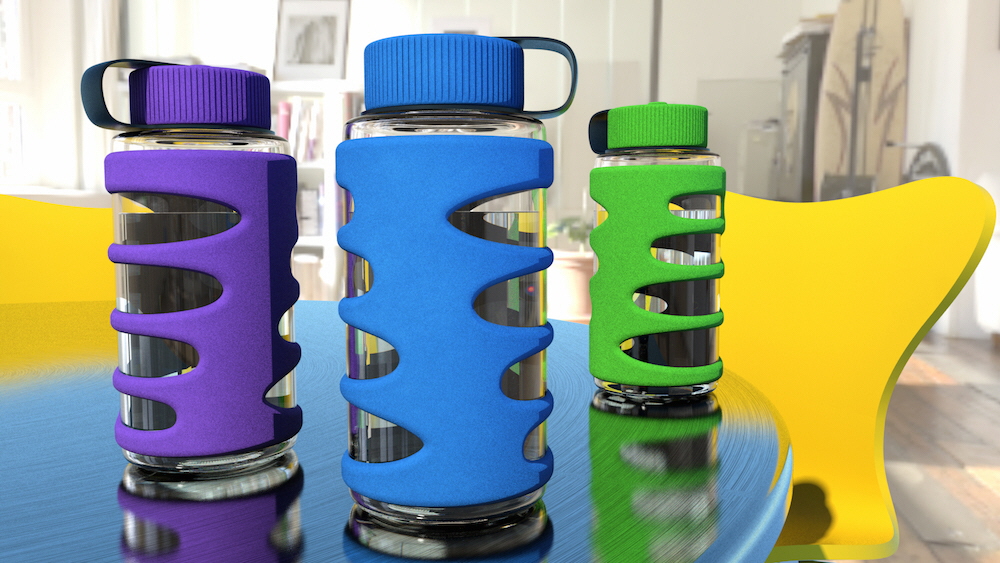 Brought to you by solidThinking

A recent test drive of the beta version of solidThinking’s 2015 edition of Evolve, impressed with the variety and quality of features available in this NURBS-based CAD package. It is a solid option for NURBS curve and surface editing, NURBS solid operations, drawing views, and viewport rendering. With a standard host of 3D data output options and plug-ins for industry standards like Keyshot and SolidWorks, Evolve 2015 is ready to integrate into an existing design workflow. Support for both Windows and Mac OS extends back to Evolve’s origins so unlike most other 3D modeling packages, Mac support does not rely on Boot Camp; nor is it a beta in perpetual development. So even larger design studios with a mix of Mac and Windows systems would have no problem implementing Evolve.

Evolve 2015 features a variety of new tools and enhancements. Notable among them is the Construction Tree which saves a nested history of inputs for top level model elements. This is a unique addition to the existing parametric options and enhances the designer’s ability to iterate on individual features by swapping input geometry and editing parameters. The Construction Tree is only hierarchical in its own context so entities outside of the tree can be swapped in and out dynamically. For example, if you want to swap the input shape of a trim command, the new input curves can be drawn long after the original trim was created and still work. This adds a new dimension to the modeling environment and if the “open without history” option is any indication, this feature is in ongoing development but it is worth noting for the flexibility it offers. 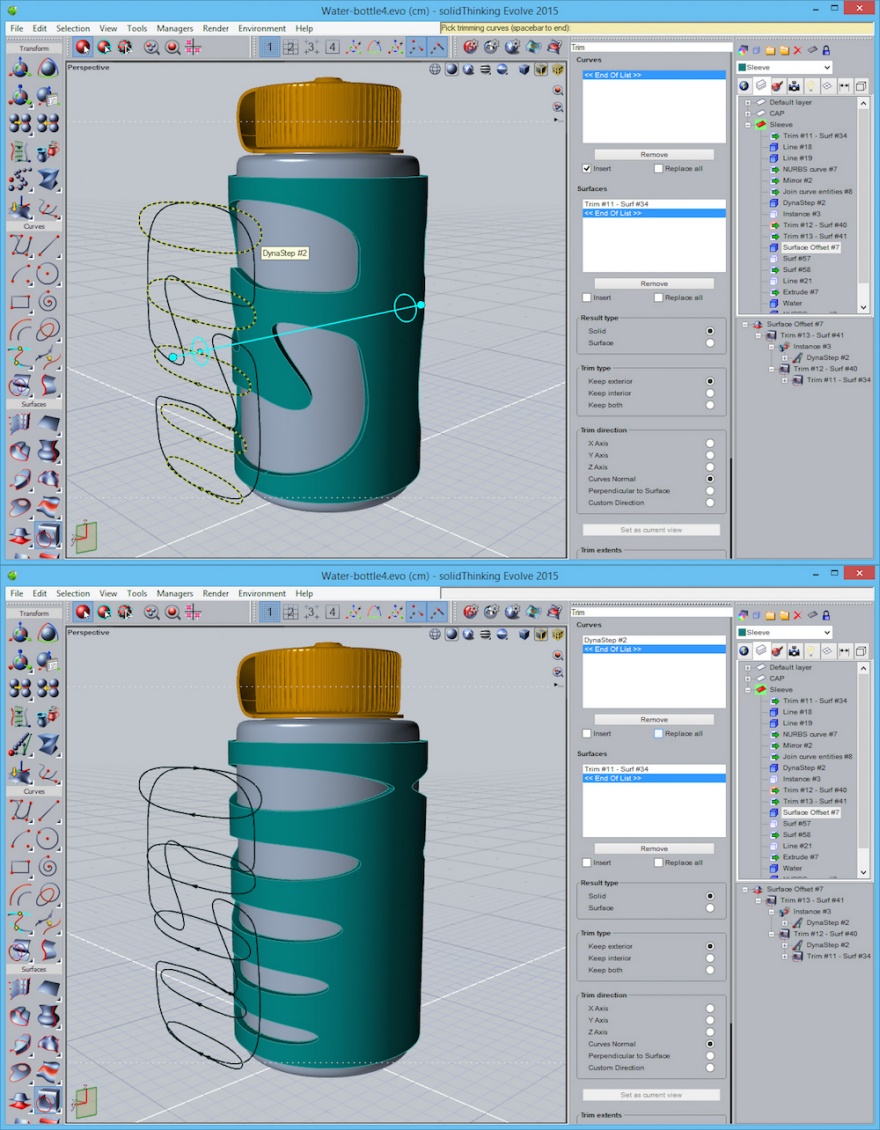 Lighting is handled by an illumination map for general lighting with a physical sky option for controlling dominant shadows and highlights. The visual fidelity of the new rendering package is noteworthy especially considering the minimal amount of time input required to achieve good results. With an included prefab material library, stock models and environments, the ratio of time input to visual fidelity makes Evolve a viable contender as an all-in-one modeling and rendering solution. Thanks to existing Keyshot Live Link integration and .obj save options, it is ready to interface with industry standard rendering solutions as well. 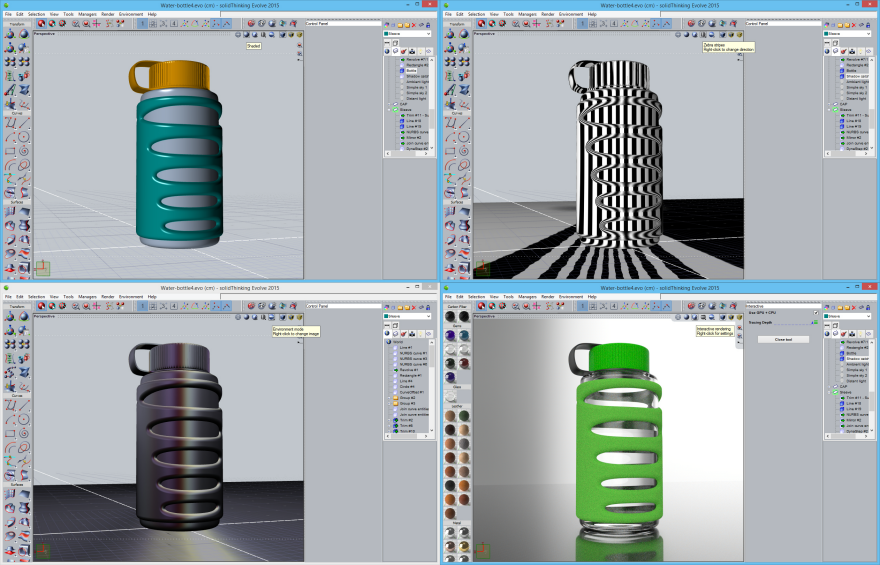 Another major new feature in Evolve 2015 is a set of modeling primitives and related tools that solidThinking has dubbed “PolyNURBS.” According to Darren Chilton, the Evolve Product Manager, these modeling tools are an entirely new development. They behave like subdivision surfaces while generating useable, manifold NURBS output. The “nurbify” function quickly switches between a hard edged quad-poly model and a smooth-edged NURB surface and the model is editable with familiar polygonal tools in either state. The end result is a fast and intuitive method for generating organic forms that can be manipulated with common NURBS operations like Booleans, blends, rounds and control point edits. To quickly test their viability I exported a PolyNURB model of an organic vessel as an .igs file. The result was a fully developed surface that imported flawlessly into both Inventor and SolidWorks as manifold solid geometry, ready for downstream production processes. 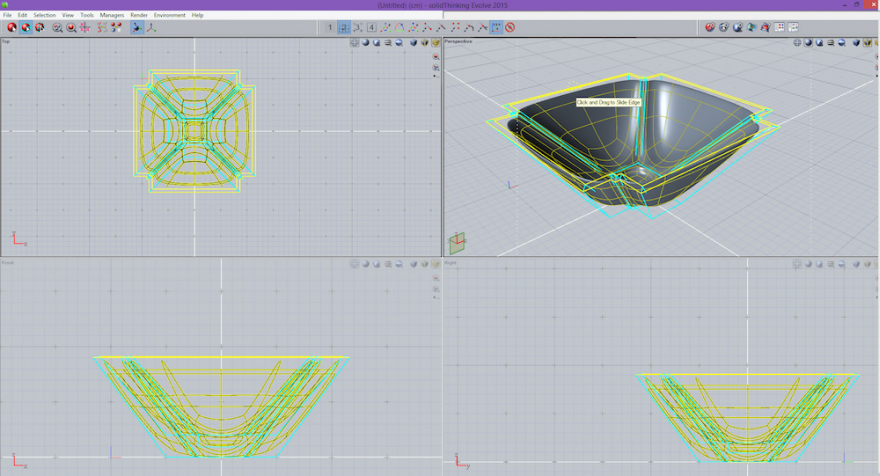 solidThinking has demonstrated successful implementation of parametric control in a NURBS modeler. All entities from lines, curves and primitives to lofts, sweeps and even entities created as PolyNurbs offer some degree of parametric control. Parameters can range from coordinates for the endpoints of a line to angles of revolution in a primitive sphere. Most are editable as numerical values in the Control Panel when an object is selected, and as visual controls in the viewports. This hybrid approach offers both intuitive visual control, and precise numerical input.

What the parametric system does not offer however are global variables or any form of centralized management of parameters familiar to anyone who is used to parametric, feature-based modeling. As a result, there are no functional parameters so objects cannot be driven mathematically—and in some cases require manual editing. However, clever use of instances and patterns almost completely negates the need for dynamic variables and functions because instanced objects dynamically retain the properties of their parent objects. 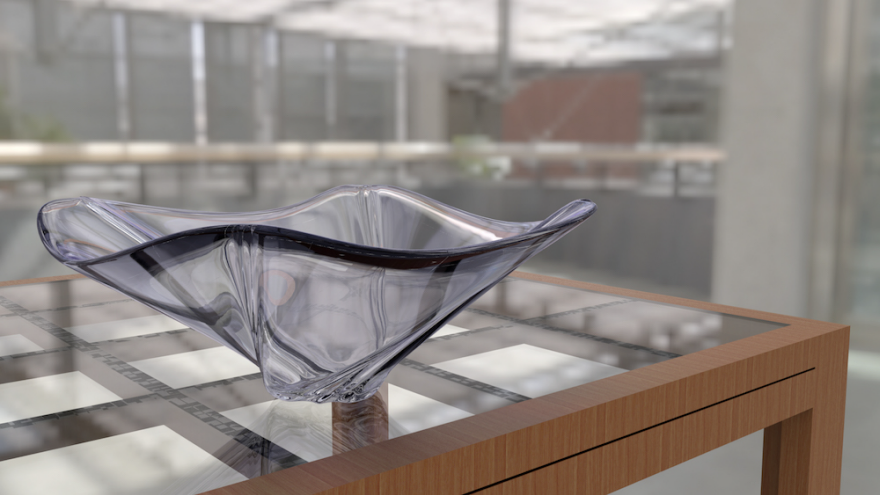 Evolve has its own UI/UX quirks, but overall the interface has a functional look and feel and it is fully customizable, including custom hotkeys. Anyone with experience in Rhino or Alias will feel at home with the 4-view default layout and those familiar with the world of parametric, feature-based modeling will appreciate how easy it is to learn the basics and adapt. Most, if not all, of the frustration I experienced in my short time with Evolve related to habits formed in other modeling environments because ultimately, all modeling software is quirky. After a half hour online with the “Essential Videos” and some additional time reviewing the tutorials I felt comfortable with the interface and confident with the basic tools. Mastering the nuance of the interface and modeling tools will take considerably longer. What is most notable about my experience with the software is how quickly I could move from a simple set of sketches and curves to a fully developed iteration ready for rendering and beyond. Whether you currently use Evolve or you are new to the realm of NURBS modeling altogether, Evolve 2015 is worth a close look for future design projects.