Using a router bit as a finger to manipulate material between cuts is a non-obvious, genius move

The way that a machine can "free" you is by doing both boring and exciting things. When you set up a machine to handle dull, repetitive tasks, or tasks of such sophistication that they require an undue amount of your attention, now you can turn your mind to what humans are better at: Innovation.

Sketchthis.net founder and power Handibot user Eric Schimelpfenig understands this keenly. And in his quest to offload more of the boring tasks to his Handibot, making incremental improvements to his process, he eventually created a brilliant, entirely new way to use the machine—one that not even the machine's creators could have envisioned.

First off, let's look at how a Handibot is used on large pieces that exceed the machine's cutting envelope. Let's say you have a long piece of lumber that you'd like to turn into a stair stringer, by routing channels into it like this: 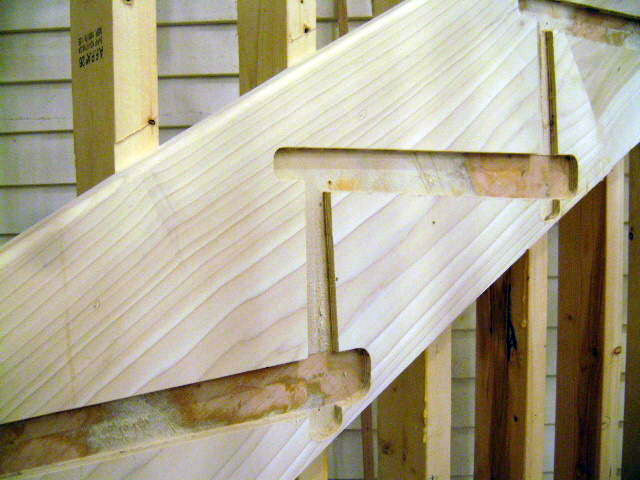 What you would need to do is take an indexing rail—a long piece of wood with precisely-spaced notches in it—like this: 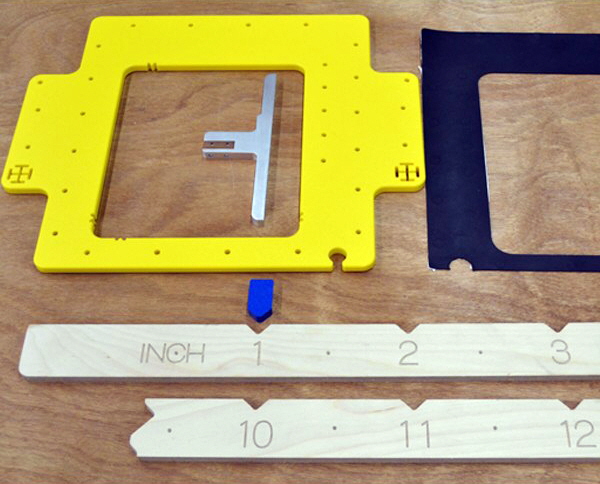 As you can probably puzzle out from the photo above, you attach the indexing rail to your workpiece. The little blue finger nests into the notch of your choosing, and you cut whatever the machine can reach from that position. Then you slide it down a notch or two to make the next cut, having "tiled" your cutting file. In other words, you're cutting out that stair pattern one 6" x 8" chunk at a time. 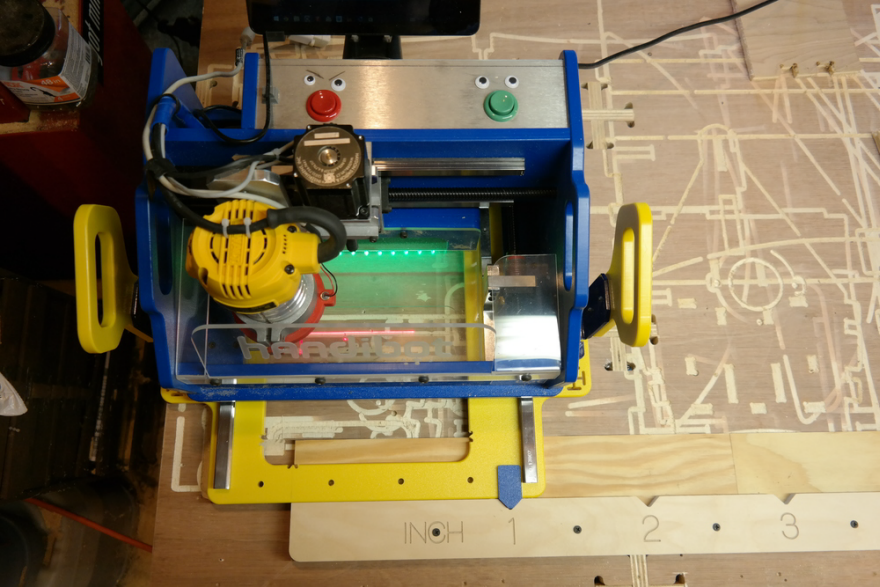 He sticks a long piece of plywood under the Handibot, clamps it down, then cuts the first area of notches and numbers. He also has the machine drill a hole between the numbers. And he's hacked the CAM code so that after it cuts, the machine stops the bit from spinning, moves the bit above the hole, plunges down into the hole, then moves sideways—sliding the entire workpiece over by the precise amount required to get to the next cutting area. Then the bit lifts out of the hole, starts spinning again to cut, rinse and repeat.

As you can see, all the user needs to do is repeatedly clamp and unclamp the wood. But this next hack gets rid of even that step. Here Schimelpfenig is using the Handibot on PVC pipe, held in place by a cam clamp that presses the upper fence against the workpiece. But this time he's hacked the code to not only move the pipe through the machine, but also to unclamp and re-clamp the piece before and after moving it:

We asked Schimelpfenig about both his background prior to CNC (turns out he came from a traditional woodworking shop) and how he came up with these crazy Handibot hacks.

Core77: We didn't get to this in the last interview, so what is your design and build background?

Eric Schimelpfenig: I started at a wood shop right outside of high school. We designed high-end kitchens and very complicated, unique, one-off pieces of furniture, involving anything from custom veneers to Japanese joinery. I ended up working at this wood shop for a number of years, and just picked things up on the job.

You mentioned earlier that you're not a good woodworker. When did you realize this?

Well, I don't like doing mundane or repetitive tasks. And with a lot of bread-and-butter, making-money woodworking—cabinet boxes and such—there's a lot repetitive stuff. So when I say I'm not a good woodworker, I just get really bored cutting panels all day. I'd much rather have a computer do that for me, so that I can then come up with some complicated piece of joinery, or some really interesting way to assemble something.

And that's where my passion for these machines comes in. Because with them you can take out a lot of that repetitive stuff and focus your energy on creative things. It takes boredom off the table and frees up your time to be more innovative, and that's the really cool thing. So like with the Handibot, I don't really have any repetitive tasks—they're all experiments.

Did your experiences in that shop inform your current work?

You know, I think that my semi-intentional lack of woodworking skills is actually what leads me to some of these crazy ways to do stuff [with digital tools]. At the wood shop I was primarily a designer, so I didn't actually work in the shop. We worked with some really high-end, exotic materials, and sometimes I would design stuff without a good regard for the materials and the tools that we actually had to work with.

So we would sometimes run into problems. Like let's say I designed an impossibly long piece of wood, or something that just couldn't be cut with the tools that we had. Luckily we had clients that [were willing to bail us out by] buying a unique tool for a job, which is kind of a magic solution. But you're not always going to have that. So the conventionally "safe" approach should be to look around and go, "Okay, I've got a table saw and a chop saw, and a drill press--what can I actually make with these things?"

And asking "What can I actually make with these things?" gets even more interesting with digital tools.

Speaking of which, how did you figure out that PVC clamping-and-unclamping hack?

At the time I was building a geodesic dome out of PVC pipes, and I decided to use the Handibot to make parts of that.

Hang on a sec, let's back up: Tubular PVC pipe is not an obvious material to use a router on—what made you stick that stuff in the machine in the first place?

Right, so going with the "conventionally safe" approach I just mentioned, you'd probably go "Okay, I've got a cut out a pipe, that means I've got to go to the chop saw." Or "I've got to drill holes in this pipe, so let's go to the drill press." But I wanted to see if I could work it with the Handibot. Admittedly that's not always the best way to approach a problem, but it is certainly the most interesting. Sometimes you come up with some cool innovation that way.

Initially I was trying to make parts of this geodesic dome with the HandiBot. We ran into a time crunch, and I started using the HandiBot as a drill press: I'd stick a piece of pipe in and hit the button, it would drill it, and then I'd flip it over and it would drill the other side. That was really boring and basic, but it allowed me to quickly drill a hole a particular distance away from the end of the pipe. Once I set the jig up, I was just able to type the distance into the machine, then the tool would just move over and drill the hole exactly where I needed it.

But I've got that thing where I'm willing to spend time trying to automate something, so that I could save time later on. And I had like 500, 600 of these pipes I had to drill. So to automate it even more, I set the tool so it was just constantly going up and down.

That meant I could just stand at the machine and keep sticking pipes in there to get drilled, then pull 'em back out. It saved just a little fatigue of not having to push a button or pull a lever down.

Not a very interesting use—but it definitely helped out. Because afterwards I had all this pipe laying around, and I decided to use the HandiBot to mill the Sketchup logo into a piece of pipe. As I did this, I noticed something. You know how when you cut into PVC, it gets all these little hairy pieces around the cut? I didn't want to clean that off every time and wondered how I could make the machine do it.

So I figured out that I could get into the code—you know, the cutting file—and program it so that after cutting, the bit would stop spinning. Then I programmed the bit to go down near the cut and just knock all the little hairs off to make it smooth. It worked and I was like "Oh, man, that is really cool!"

Then I thought, What if I could automate this whole process? So what I ended up doing is I put a ten-foot pipe in the machine, and I had the machine itself come over and actually lock down the pipe in this rig that I built. It would mill the logo, it would unlock the pipe, slide the pipe over six inches, relock it, and keep going. So now I could stick this ten-foot pipe in the machine, work on other stuff in my shop for about an hour, and the Handibot is just pumping out however many logos it can fit on the pipe—all without me touching it one bit.

Pretty amazing. How many tries did it take you to get that process correct?

Probably three or four builds on the rig to get it right, but once I got it, it just worked over and over again. It was awesome.

Your M.O. is not just to figure this stuff out, but to show other people how to do it. This particular trick sounds complicated to teach—is it?

Right, so to actually turn off a spindle like that, you need to go in and manually edit code; it's just text, but it's pretty daunting if you're not comfortable with that stuff. And that feature, to stop spinning the bit, would not typically be built into CAM software because you never want a bit in a piece of material if it's not spinning—if it contacts solid material and it's moving at high speeds, it will break the bit.

But like you said, I like to figure stuff out and then teach other people how to do it—and I try to make it as easy as possible. So after I figured out that this would work, I ended up going to the guys at Vectric, the company that makes the CAM software that comes with the HandiBot. They're great guys and really smart. And I said, "Look, here's a situation where you'd actually want to have the tool off when it's introduced into the material, and it works--there's got to be a way that you guys can make this easier."

So Brian over at Vectric looked at it and was like "Yeah, I think we could figure that out." And he wrote me a little piece of software that plugs into their software. It will allow you to really easily do that. So, once he did that, I'm able to now remake jigs much easier, and I can do it all in that friendly software. And we've actually open-sourced that little plug-in, so that anybody who wants to recreate what I did and make their own rig, they can do that.

Sweet. Have you come up with a name for the process?

Not a sexy one, I just call it the HandiBot Automated PVC Jig. I probably should have called it like, "The PVC Milling Master 9000" or something. I guess I got to get a marketing guy involved and start naming my stuff better!