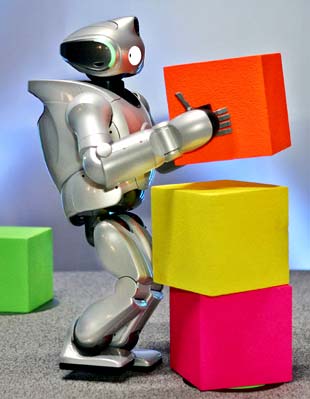 While the boys at RepRap are busy fashioning gears, Sony obviously has bigger goals. Here we apparently have a fully-functioning, streamlined robot (son of Jet Jaguar?) assembling its eventual mate. Given the mismatch in styles, one can only imagine that either it's a serious case of opposites attract, or Sony's new robotic vision isn't quite up to snuff. Of course, Qrio may just be stylistically challenged.

Truth is, this thing is pretty cool. And it even talks to itself while working. Read more about the little bot-that-would over on C|Net (Link).