It was designed for an art exhibition, but would be awesome for a one-versus-many tournament 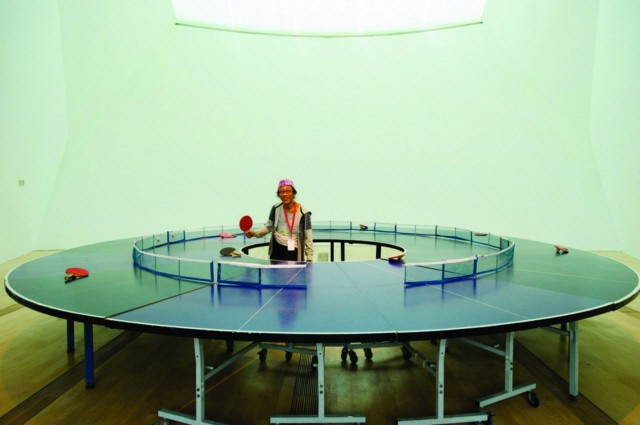 A few years ago a Japanese variety show pitted three Olympic fencers versus 50 average fencers—all at the same time, Chinese-Connection-style, to see what would happen.

Any of you who saw that must surely have wondered: How can I apply those odds to ping pong? Well, wonder no more: Singaporean artist Lee Wen has the solution. 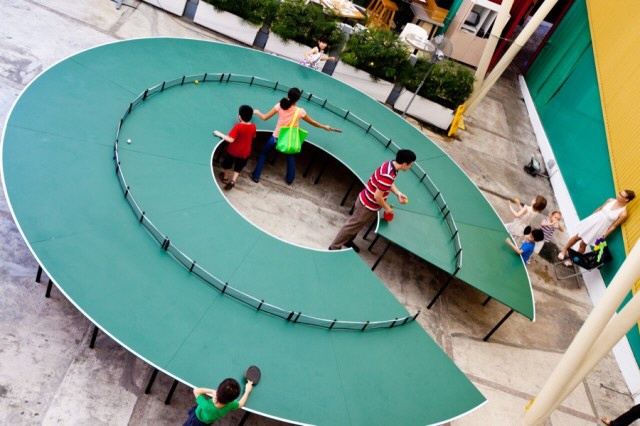 Conceived of way back in 1998 for an art performance in Australia, Wen's "Ping-Pong Go Round" was created as an interactive art installation. 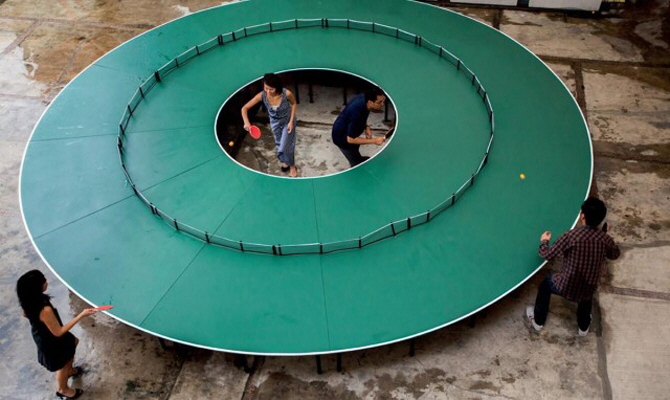 Alas, it was not actually designed to allow many players to battle one or two stuck in the middle, but rather to give players "a different perception of the limitations" of the normally linear, dialogue-like game, in order to provide players with "new possibilities of a broader dialogue," in Lee's words.

In 2012 the Singapore Art Museum invited Lee to revisit the project and offered to sponsor two versions: The first was his original six-meter-diameter table, located outdoors, while the second was a scaled-down version that shared space alongside other exhibitions inside the museum proper. "At first I was not too happy to present the smaller one as it was scaled down," Lee writes. "But as it turns out the smaller table had its advantages, as [one viewer] observed the smaller one is more intimate where players have to hit the ball with more care, just like a more considered speech at the international meetings or conferences of globalization and diverse societies and countries of multi-culturalism."

Last year Lee was again invited to break out the table, this time at Art Basel Hong Kong. Call me shallow, but that being HK, there's another Lee I would have loved to see in the middle of this thing.