The Aesthetics of the Autonomous

Driverless cars are coming – but what style will triumph?

It's been over half a century since GM began offering visions of a driverless car. From their experiments in radio-controlled highways to the atomic chic of the Firebird IV concept car, GM's Futurama exhibit at the 1964 World's Fair imagined autonomous travel that was both faster and safer.

GM's Firebird IV concept predicted a future where cars were autonomous and addressed driverless interior opportunities way back in 1964.

The Firebird IV looks like you'd imagine a mid-'60s vision of the future would look. Inside, there are swivel bucket seats, a refrigerator, games table, stereo and even a television. The exterior is no less radical. It's a sleek satellite; definitively "space-age" with unconventional details that, 51 years later, still haven't made it to market. The same year, and in stark contrast, Ford unveiled the Mustang—a performance car that would target the Baby Boomers. It focused on the immediate future and took a more familiar approach to car design. It has since sold in excess of nine million units in the USA alone and launched in its sixth generation just last year.

Ford's original Mustang was also announced in 1964. It focused on the more immediate future and used a more familiar and evolutionary aesthetic.

The Firebird's spaceship form may not feature in many business plans these days, but the autonomous car is creeping ever closer to a market reality. Along with the challenges of technology and legislation, those working on self-drivers have another important challenge to face in the vehicles' aesthetics—which could prove vital in the push to gain acceptance and success given what will be an unfamiliar proposition.

Finding the appropriate aesthetic for a technologically advanced vehicle isn't a new challenge. When cars first began to be seen on the roads in the 1900s, the 'horseless carriage' aesthetic was important in helping integrate a new method of transportation. A century later, hybrids, EVs and hydrogen fuel cell cars have all marked their development aesthetically, albeit it with differing levels of success. So what kind of design—inside and out—might win over future drivers and riders? 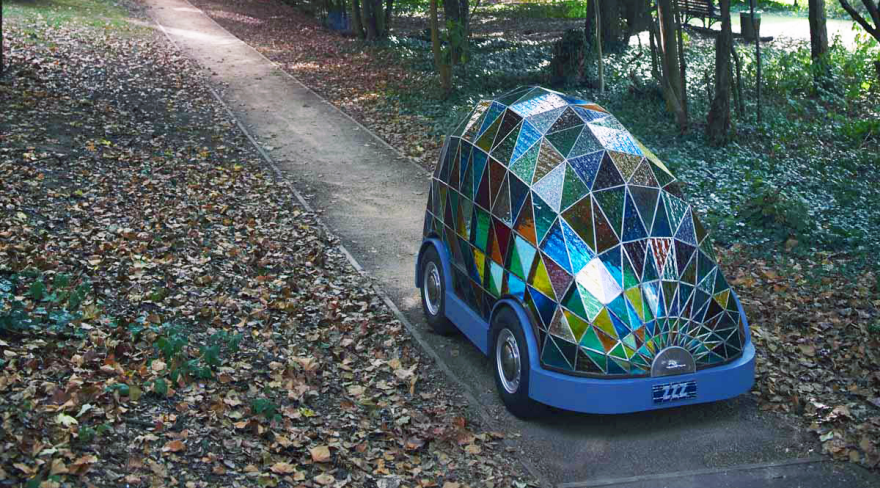 Dominic Wilcox's playful foray into autonomous car styling at LDF14 demonstrates the wild new aesthetic possibilities of this emerging technology. Whether consumers would part with hard-earned cash for such a thing is another question.

Last year, Google released the first photos of its much-touted prototype autonomous vehicle. At first glance, the vehicle seems misguided in its profound separation from everything we know as car design. A Duplo-cartoon-like toy, the tech giant's debut looks more like the icon for an app than a vehicle to be seen climbing out of. Inside, it's more utilitarian and functional than cutting edge, with a screen that shows the route, a button to start or pull over, and an emergency stop button. If we consider its possible usage however, Google's approach makes more sense. Sold as fleets to an Uber, Lyft or non-OEM car-sharing scheme, for use in slow-speed, dense urban centres, these pod-like vehicles might be just the ticket. It's a function-over-form world Google is looking to serve. 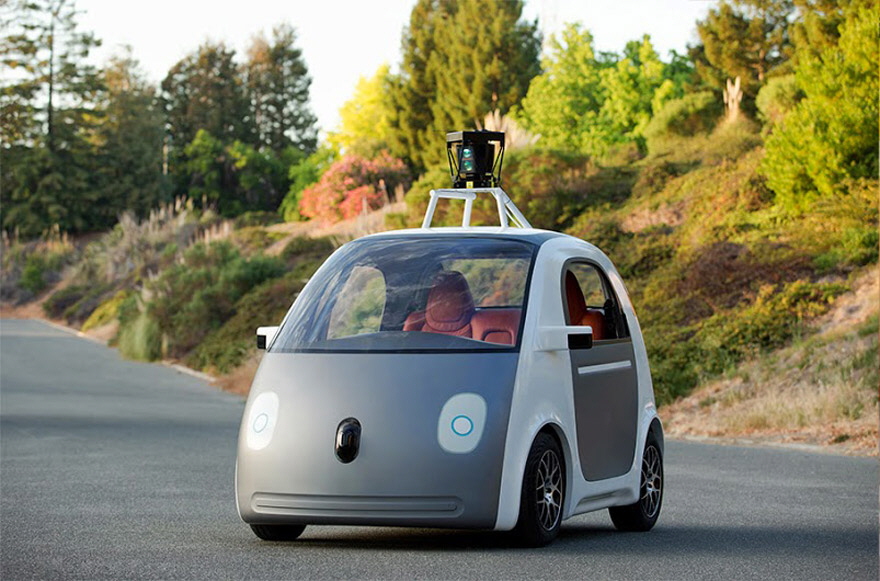 Despite goofy looks, Google's autonomous car makes a lot of sense as an utilitarian, taxi-like pod. Given the approach, it's easy to imagine such a product being sold in fleets to an Uber or Lyft.

The flip-side to Google's pod is the Mercedes-Benz F015 concept car. Revealed in January at CES, the F015 is recognisable to many, not from the roads, but from the cinema: its design is closer to Tom Cruise's car in Minority Report, or the flying police cars in Blade Runner than to anything we see in the parking lot today.

According to Mercedes, the exterior design of the F015 "creates a unique, progressive aesthetic," but many are likely to find it unfamiliar and even imposing. The inside is no less technocratic, with swivel seats, gestural interfaces and six digital display touch screens, which "has an immersive user experience and allows a continuous exchange of information between vehicle, passenger and the outside world." In some ways, such a futuristic approach might be what people expect of the long-promised autonomous cars. It also remains to be seen if it's also what people want.

Mercedes-Benz's F015 concept is more reminiscent of the 'cars' in Blade Runner and Minority Report. But is the futuristic aesthetic and tech-laden interior a vision for what consumers want or just a marketing ploy?

The Audi A7 piloted driving concept represents a third and more likely aesthetic possibility. The car, (affectionately named "Jack") recently drove from San Francisco to Las Vegas, largely without raising an eyebrow, due in part to its appearance—it looks like an Audi A7. Jack travels with a driver and has all the standard interior conventions of a contemporary car, plus a few additional details to assist with the different levels of control that are required. It's a strategy that could well work for the consumer, as it doesn't require a wholesale transformation of one's idea of the car. And it works for the industry, allowing long-developed brands to maintain their strong, well refined and familiar identities.

Audi's A7 piloted driving concept takes a more evolutionary approach to autonomous car design. It looks like an Audi A7 on the outside while adding a few a!dditional user experience details inside to help with different levels of control.

By making aesthetic leaps as well as technological ones, Google and Mercedes may be taking the autonomous car further than even their open-minded audiences will follow. Google's toy town pods might work as future urban taxis, but do people really want their cars (or even their taxis, for that matter) to look like kitchen appliances? With such a childish aesthetic, Google is trying to create an entirely new picture of a car to accompany a massive upheaval in technology which could well be too much of a leap for mainstream consumers. The approach also seems to lack some integrity, what with there being no obvious link between the kit under the hood and the aesthetics we see. In short, it reminds me of Google Glass—all tech and no style. Meanwhile, the Mercedes concept is reminiscent of GM's 1964 Firebird IV—the exterior having been dialed up to the point where it has become a sci-fi vision of the future. The interior also features ideas first seen on the Firebird, but the tech-laden space begs the question as to whether consumers really want yet another place to use technology and access more information? Audi, on the other hand, has taken a more evolutionary approach to the coming revolution. Like Ford's original Mustang back in 1964, it is a more familiar and conventional approach to car design and one that is focused on the immediate future.

Make no mistake, the autonomous car is likely to transform the automotive industry and could even alter our very concept of what a car is. But the basic look of a modern car works. Google and Mercedes-Benz should bear in mind that new technology can succeed, and is often most successful when combined with the appearance and comfort we expect. Just look at Tesla's Model S, an electric sedan with revolutionary technology and the sex appeal to make it desirable. Admittedly, the emergence of electric cars may not be as big of a mental leap as automobile autonomy. That said, it's interesting to note that Tesla's success so far in introducing this new technology is in no part down to bold sci-fi styling. Instead, the brand focuses on simply making cars—as we know, trust and love them—into something that works in a new and better way. 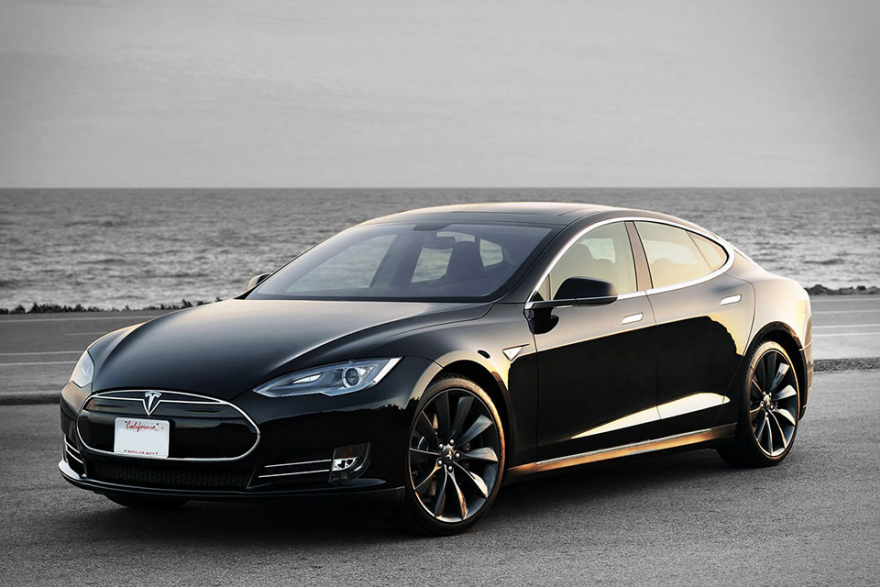 Tesla's Model S doesn't try to be different by design. It simply makes the car we know, trust and love, into something that works in a new and better way.

The Aesthetics of the Autonomous

I am a senior product and design strategy consultant specialising in the automotive and technology sectors.
www.plan.london