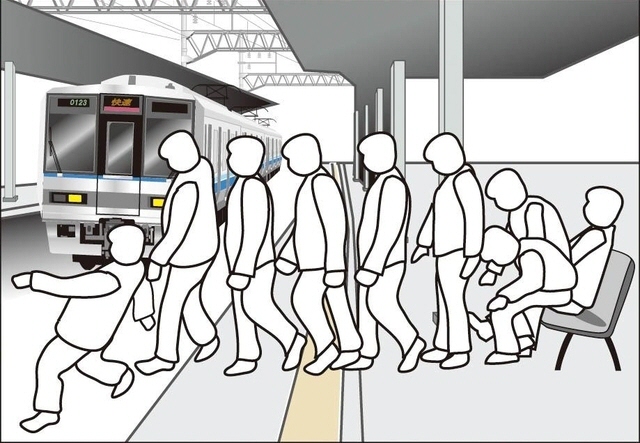 If you were asked to design a preventative solution to people falling onto subway tracks, where would you start? I imagine most folks would focus on the platform's edge, perhaps adding safety rails that aligned with the non-doored portions of incoming trains, or maybe glass walls with secondary doors like some airports have for their shuttle trains. A recent study in Japan, however, has the West Japan Railway Company focusing on the center of the platform, not the edge.

First, a closer look at the problem: The two-year study was commissioned because there is a troubling rise in drunk people falling off of subway platforms—more than 200 incidents in 2013, about twice the amount as happened ten years earlier. Thus JR West dug up all of the security camera footage to watch the few seconds before each fall, to see how they happened. According to Spoon & Tamago, which translated the study:

Ninety percent of falls are the result of people, in a drunken stupor, getting up from a bench they were sitting on and walking straight off the platform.

The results are surprising because conventional reasoning and logic assumed that drunks would wander closer and closer to the ledge and eventually fall off. The data, however, showed the opposite. Only ten percent of drunks gradually drifted towards the ledge, while an outstanding majority briskly walked off the ledge as if they knew exactly where they were going.

That being the case, the proposed fix focuses on the center of the platform where the waiting benches are. JR West is experimenting with rotating the benches 90 degrees, making them perpendicular to the tracks rather than parallel; the thinking goes that a drunk lurching to his feet and walking straight forward, as is apparently their wont, will have to eventually stop and coordinate a turn to make his way towards the tracks.

Some of you are undoubtedly thinking: Ought we really be designing a solution to save 200-something drunks a year? After Gizmodo picked up the story, one commenter pithily wrote "I do not approve of this at all" and signed it "Darwin." But whether you sympathize for the boozers or not, there is an economic cost to each incident and the ripple effect of delayed trains (and possibly a gory clean-up). If this works, paying a handful of maintenance workers to rotate benches will seem a bargain.